This case report details the multimodal approach used to address clinical signs of recurrent CHF in a mixed-breed dog.

Dr. Rivera is a second-year cardiology resident at the University of Florida Small Animal Hospital. Dr. Rivera graduated from veterinary school at The Ohio State University and went on to do a rotating internship at Virginia-Maryland College of Veterinary Medicine, followed by an emergency and critical care internship at North Carolina State University. His research interests include vascular function in heart failure and therapies to target endothelial dysfunction.

Dr. Adin is a clinical professor of cardiology at the University of Florida College of Veterinary Medicine. She received her DVM from Cornell University in 1996. She completed a rotating internship at VCA South Shore Animal Hospital in 1997 and a cardiology residency at the University of California, Davis in 1999, with ACVIM board certification in cardiology in 2000. Her clinical research focuses on the investigation of diuretic treatments and neurohormonal modulation of congestive heart failure.

Electrolyte derangements are common in patients with congestive heart failure (CHF) as a result of loop diuretic therapy and chronic, maladaptive activation of the renin-angiotensin-aldosterone system (RAAS), sympathetic nervous system, and antidiuretic hormone (ADH).1 Overactivation of the RAAS, especially in recurrent or end-stage CHF, often results in excess relative free water retention, leading to hypochloremia and hyponatremia despite total body sodium excess.1-4 These electrolyte abnormalities are inversely related to survival and are strong negative prognostic indicators.3,5,6 Additionally, hypochloremia appears to contribute to disease progression through RAAS activation.5-9 Appreciation for the role of serum electrolytes (especially chloride) in RAAS activation and disease progression has stimulated interest in methods to restore normal serum electrolyte concentrations in dogs with medically managed CHF. This case report describes the use of multimodal medical therapy with novel medications to address clinical signs of recurrent CHF characterized by dilutional hypochloremia and hyponatremia in a dog with dilated cardiomyopathy (DCM).

The dog had been doing well clinically with no medication changes between initial evaluation and the onset of clinical signs that prompted the emergency visit 10 months later. Her diet was a commercially available grain-inclusive kibble without legumes, and whole blood and plasma taurine concentrations were normal at the time of DCM diagnosis. She had been diagnosed with parvoviral infection as a puppy, and this was suspected to be the underlying cause of her heart disease. Parvoviral myocarditis can be associated with permanent cardiac damage and the development of a DCM phenotype.10,11 Figure 1. (B) M-mode through the LV showing severely decreased systolic function. Note the minimal change over time in the LV diameter during systole and diastole, indicating poor contraction.

Two weeks prior to presentation to the emergency department, the dog developed progressively decreased energy level, increased respiratory rate, and abdominal distention, all of which were accelerated by inadvertent discontinuation of furosemide 1.5 days before presentation. Two 1.9 mg/kg doses of intravenous furosemide 8 hours apart were administered by the emergency department before care was transferred to the cardiology department. 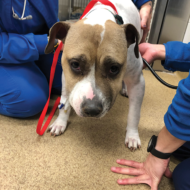 Figure 2. The physical examination showed peripheral pitting edema of the face (A), legs (B), and ventral abdomen. 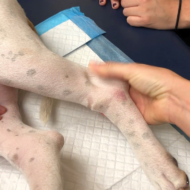 Figure 2B shows the dimple observed after compression of the periphery, which indicates pitting edema. 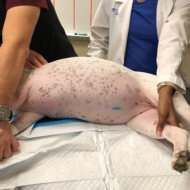 Figure 2. Abdominal distention (C) due to ascites was also present. 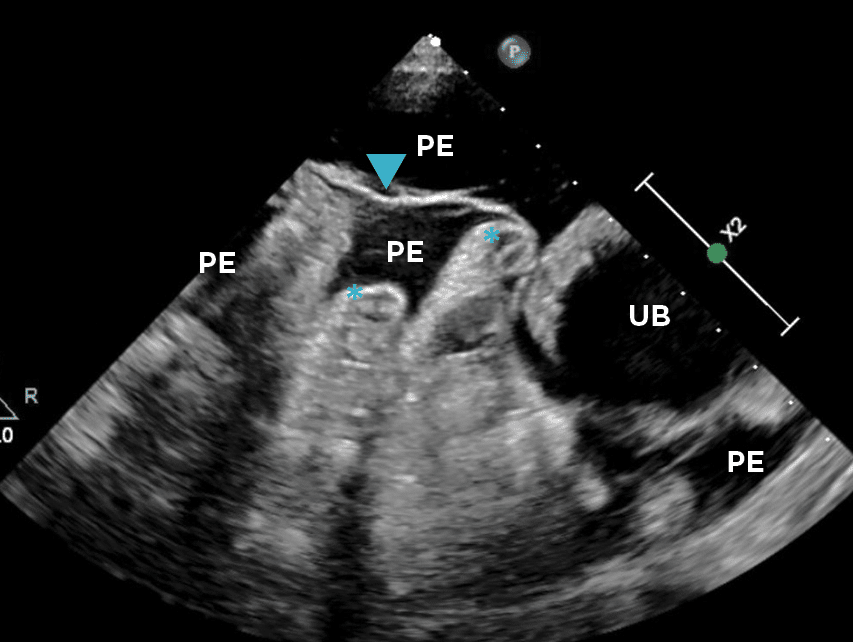 The dog’s problem list included DCM with recurrent right-sided CHF, metabolic alkalosis, and electrolyte imbalances, including hyponatremia, hypochloremia, and hypokalemia. Some diagnostic differentials for the electrolyte abnormalities were ruled out based on examination and history (e.g., gastrointestinal loss, fluid therapy). The most likely differentials for the hyponatremia and hypochloremia included dilution (e.g., from nonosmotic release of ADH), loss (e.g., from loop diuretic administration or third spacing), or a combination. The increase in serum bicarbonate (metabolic alkalosis) was likely secondary to diuretic administration and compensation due to hypochloremia.

Therapeutic abdominocentesis of 2.5 L of serosanguinous fluid was performed using a 14-gauge, 5.25-inch, over-the-needle catheter after local block with lidocaine. The body weight was 20.9 kg after abdominocentesis.

The following clinical problems were considered in development of a home treatment plan:

Medication changes that were instituted after abdominocentesis are listed in TABLE 3 and discussed below.

Although the missed furosemide doses prior to presentation likely contributed to the recurrence of CHF, clinical signs of decompensation were noticed by the owner in the preceding weeks while medications were being given as directed. Because the bioavailability of furosemide is variable and theoretically decreased in the presence of gastrointestinal edema (as occurs with right-sided CHF),12 furosemide was replaced with torsemide at approximately one-tenth of the total daily furosemide dose. Torsemide is a more potent loop diuretic than furosemide with consistent and high bioavailability.12

The electrolyte imbalances were considered to be multifactorial. Specifically, the hyponatremia and hypochloremia might have resulted from free water retention stimulated by nonosmotic ADH release in response to poor cardiac output and RAAS activation, and from loop diuretic–induced loss, both of which were supported by the mathematical correction of serum chloride concentration. Neurohormonal activation was considered the strongest contributor to the electrolyte derangements, especially in light of the poor diuretic response to furosemide in the setting of systemic congestion and presumed poor gastrointestinal absorption of the drug. Antagonists of ADH (e.g., tolvaptan) are expensive and not routinely used in veterinary medicine; therefore, approaches that improve cardiac output and antagonize the RAAS are maximized to reduce nonosmotic ADH stimuli. To this end, the pimobendan and spironolactone dosages were increased and the benazepril dosage was continued unchanged (TABLE 3). The increased spironolactone dosage was also intended to address the mild hypokalemia.

Acetazolamide was started due to its purported chloride-retaining and ADH-antagonizing effects,13-15 in addition to additional diuresis associated with inhibition of sodium reabsorption at the proximal renal tubule. Acetazolamide causes bicarbonate excretion and chloride retention in the proximal renal tubule, which promotes metabolic acidosis;16,17 this effect was considered beneficial for this dog because loop diuretic use had caused metabolic alkalosis.

The owner reported that the dog showed improved exercise capability, normal appetite, and normal resting respiratory rate at home (24 to 30 breaths/min) at the 2-week recheck (Visit 2). Physical examination findings were body weight, 18.7 kg; body condition score, 3/9; moderate muscle loss; heart rate, 140 beats/min; respiratory rate, 32 breaths/min; unchanged murmur; less abdominal distention; and resolution of the peripheral edema that had previously affected the head, legs, and ventral abdomen (Figure 4). Abdominal POCUS showed subjectively moderate ascites (although significantly less than initial presentation) that did not require abdominocentesis. Serum electrolytes and bicarbonate were within normal limits (TABLE 2). The BUN was mildly elevated, hypochloremic metabolic alkalosis was resolved, hypoalbuminemia was resolved, and the degree of mathematical chloride correction was minimal. These improvements were consistent with chloride retention and a reduction in relative free water excess. The creatinine increased slightly but remained within the reference range. Medications were not changed at this visit.

The dog was reevaluated 1 month later (Visit 3) and the owner reported continued improvement in activity levels and overall clinical status. Physical examination findings were body weight, 16.8 kg; heart rate, 108 beats/min; respiratory rate, 20 breaths/min; no peripheral edema; and normal abdominal appearance and palpation with no fluid wave. Subjectively, the amount of ascites noted on abdominal POCUS was minimal. Recheck blood analysis showed stable values except mild hypokalemia (TABLE 2). Medications were not changed at this visit except for the addition of oral potassium supplementation. A recheck was recommended in 2 months. The dog continues to be stable at the time of writing 6 months later, although it was necessary to increase the torsemide dosage to address recurrent ascites 5 months after emergency presentation.

Many dogs with CHF (regardless of the underlying cardiac disease) respond initially to furosemide, pimobendan, and RAAS inhibitors (angiotensin-converting enzyme inhibitors and spironolactone),18 but recurrent CHF can be challenging to address. Several potential causes of CHF recurrence could have affected the dog in this case report, including missed furosemide doses, poor gastrointestinal absorption of furosemide due to right-sided CHF, and exuberant RAAS activation and nonosmotic ADH release as a result of poor cardiac output. Although peripheral edema is not a common finding in dogs with CHF, the authors consider it possible that underlying renal sodium retention and relative expansion of extracellular fluid volume could have been an underlying contributor. Recurrent CHF was successfully managed in this dog by substituting furosemide with the more potent loop diuretic torsemide; increasing the dosages of pimobendan and spironolactone; and adding acetazolamide, a novel chloride-retaining diuretic with possible ADH antagonism.

A major clinical concern in this dog with recurrent CHF was the presence of hyponatremia and hypochloremia. In both human and veterinary medicine, hyponatremia and hypochloremia have been associated with poor outcomes, including rehospitalization and increased mortality.4-9 Recent evidence suggests that hypochloremia is more closely and negatively related to survival, renal function, and loop diuretic doses than hyponatremia in people with CHF.5,6 Intrarenal chloride is important for salt sensing, and hypochloremia can contribute to RAAS activation and disease progression. A recent study in dogs found that hypochloremia at initial CHF presentation was significantly correlated to discharge and end-stage diuretic doses (used as markers of disease severity), even in dogs that were naïve to diuretics.1 The effect of chloride-retaining interventions (e.g., acetazolamide, chloride supplementation) on clinical outcomes are currently under investigation, but a small study in humans suggests benefit.13

Mathematical correction of serum chloride concentration for a normal serum sodium concentration can provide insight into whether hypochloremia is due to relative free water retention (dilutional) or to loss in the urine (loop diuresis).3 The serum chloride concentration of this dog was notably higher after mathematical correction (102 mmol/L after correction, compared to 93.6 mmol/L measured), although still below the reference range, indicating that the hypochloremia was due to the mixed effect of loop diuresis and relative free water excess.3 Hypochloremia is associated with diuretic resistance in dogs and humans with refractory CHF, and these patients could exhibit impaired renal excretion of water, which, in combination with the use of potent diuretics, can lead to hyponatremia and hypochloremia.2,19-21

The use of acetazolamide to address hypochloremia and metabolic alkalosis, while contributing to diuresis in this dog, was adjunctive and novel. Acetazolamide is a carbonic anhydrase inhibitor that has been used for the treatment of glaucoma and neurological disease22 in dogs but has not been reported for CHF treatment in veterinary medicine, although it has several unique properties that could be beneficial for this purpose. Some authors have proposed that acetazolamide might have an anti-ADH effect that raises serum sodium and chloride concentrations (presumably through greater aquaresis compared to natriuresis).16,17 Acetazolamide’s diuretic mechanism is also unique, involving the inhibition of both sodium and bicarbonate resorption in the proximal tubules, which results in hydrogen ion and chloride retention.16 Furthermore, acetazolamide improves sodium delivery to the loop of Henle, thereby boosting loop diuretic efficacy,16,23 part of the “sequential nephron blockade” strategy for treatment of CHF. In the dog in this report, the use of acetazolamide was important for the correction of electrolyte abnormalities and metabolic alkalosis. Prospective, controlled clinical studies are needed to determine if acetazolamide should be considered as an adjunctive medication in advanced CHF.

In conclusion, a multimodal, targeted approach to medication choices successfully addressed recurrent CHF and associated electrolyte derangements in this dog with right-sided CHF secondary to DCM.