Mean inhibitory concentration (MIC) is usually based on blood levels of an antibiotic, and is the minimal antibiotic concentration needed to inhibit bacterial growth. When the MIC exceeds the concentration of drug that can be safely achieved in the bloodstream, then the organism is deemed resistant.

MIC is based on standardized bacterial inoculums (105 CFU/mL) exposed to varying drug concentrations in a test tube, and it varies with both the drug and the bacterial species targeted.

Recently, the mutant prevention concentration (MPC) has been described as a novel measurement of in vitro bacterial susceptibility or resistance. MPC defines the lowest drug concentration required to block the growth of the least susceptible bacterium present in the tested population.

MPC is based on the testing of a larger bacterial inoculum (>= 109 CFU/mL), which:

Dosing based on MPC drug concentration may reduce overall bacterial numbers as well as prevent the selective amplification of the resistant subpopulation. As with MIC, MPC varies with both the antimicrobial and bacterial species targeted.

The mutant selection window (MSW) defines the danger zone for therapeutic drug concentrations, and is bordered by the MIC and the MPC values. Minimizing the length of time that an antibiotic concentration remains in the MSW may reduce the likelihood for development of resistance during therapy.

MPC values, when considered with antimicrobial pharmacology, may allow more accurate prediction of probability of resistance when bacteria are exposed to antibiotics during therapy for infectious diseases. With the increasing emergence of resistant infections, resistance prevention should be an important goal of antimicrobial therapy.1-3
Hopefully, MPC and MSW values may eventually become more widely available from reference laboratories and allow for optimal antibiotic dosing, reducing antimicrobial resistance.

The perineum and nasal mucosa are primary colonization sites, and bacteria can be transferred to other body sites via licking and grooming.2 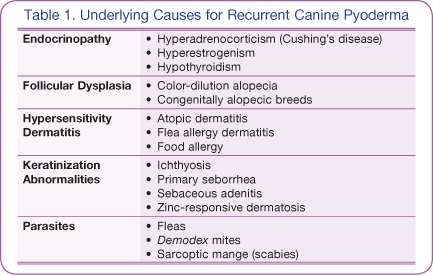 In one prospective study of 30 cases of canine recurrent pyoderma:8

The following differential diagnoses should be considered for any dog presenting with signs of pyoderma:

Canine pyoderma can be nonpruritic or minimally to markedly pruritic. Clinical signs can vary with the:

The variable manifestations of pyoderma are listed in Tables 2 and 3. These tables will be repeated in the next article and will include figures and treatment recommendations. 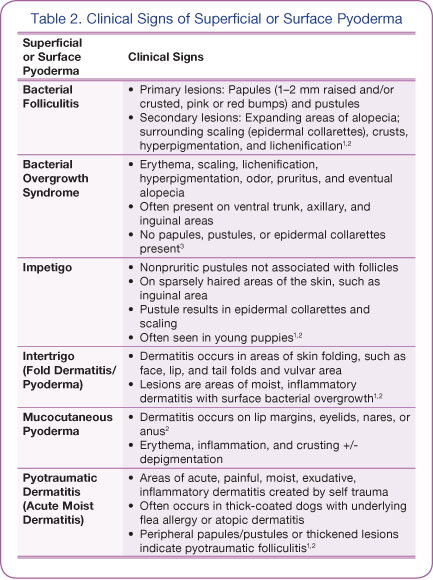 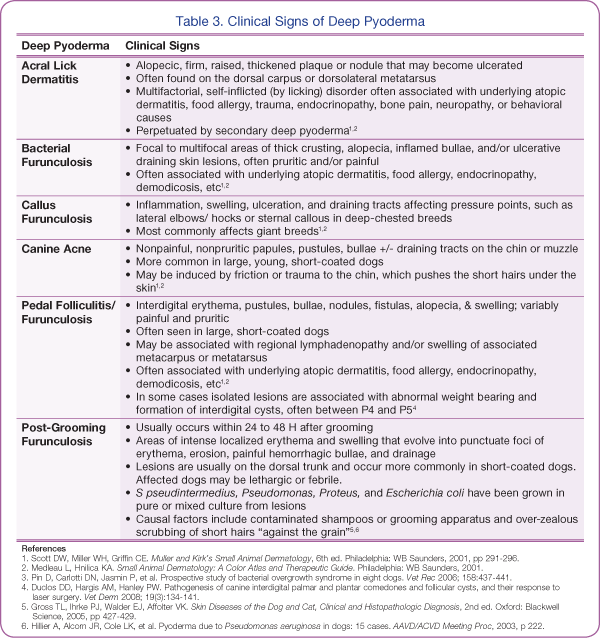 Clinical recognition of pyoderma can be complicated by differences in disease presentation, including area of the body affected and variations in coat length and breed of dog. 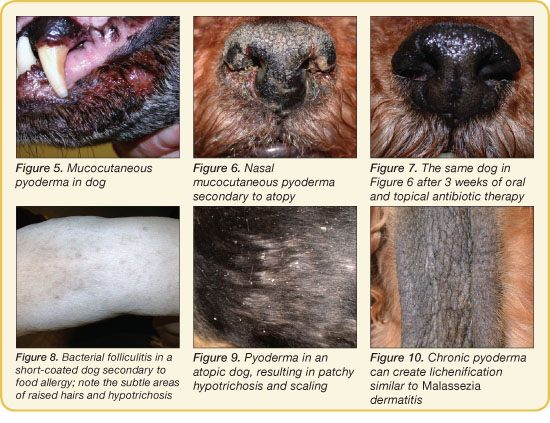 Breed differences with regard to pyoderma manifestations are not uncommon (Figures 11–13). 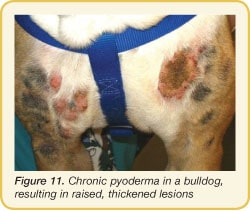 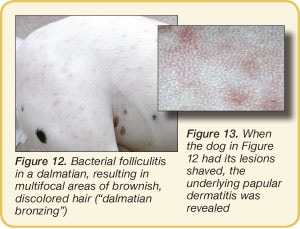 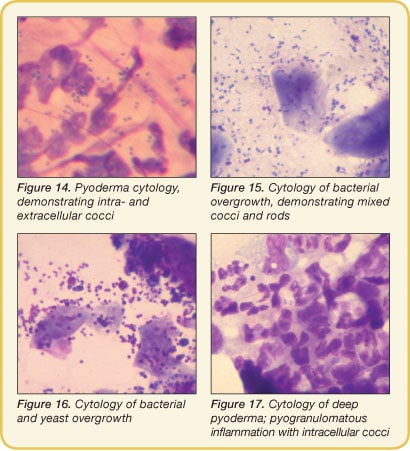 Culture and sensitivity of skin lesions associated with pyoderma is recommended if:

Culture can be obtained with a sterile culturette via:

Since lidocaine has antibacterial activity, biopsies for culture should ideally be collected under sedation or general anesthesia.7

Sensitivity is usually tested by either:

Antimicrobial susceptibility or resistance is then determined by comparing the measured MIC value to previously established breakpoints that take into account the drug’s in vitro activity, achievable and sustainable drug concentrations in the host, drug pharmacokinetics, and drug toxicity.15 See The Three Ms: MIC, MCP, & MSW for further information.

Biopsy of lesions is recommended if:

Canine demodicosis can sometimes be difficult to find in very scarred, fibrotic areas, such as the feet or in the shar-pei breed, and may require biopsy for diagnosis.

Kimberly S. Coyner, DVM, Diplomate ACVD, received her DVM from Colorado State University. After a private referral practice internship and a year practicing emergency medicine, she completed a 2-year teaching position and then a 3-year residency position in dermatology at the University of Georgia. Dr. Coyner has authored several book chapters in the field of dermatology—Morgan’s Handbook of Small Animal Practice, 4th edition (2002) and Small Animal Dermatology Color Atlas and Therapeutic Guide (2001 and 2006)—as well as articles in Veterinary Dermatology, Veterinary Medicine, and The Compendium on Continuing Education for the Practicing Veterinarian. She is currently in private practice at the Dermatology Clinic for Animals of Las Vegas.