Hepatocutaneous Syndrome in a Shiba Inu

This case report describes a 13-year-old Shiba Inu diagnosed with canine hepatocutaneous syndrome (HCS). The initial presenting signs were dull moth-eaten hair coat with erythema, crusts on the feet, and discoloration of pedal hairs. Diagnosis of HCS was made based on abdominal ultrasound and histopathology of skin biopsies. The case was managed with amino acid administration and nutritional and hepatic support. The dog had an excellent dermatologic response for a brief period, but was euthanized several weeks after initial presentation due to a declining quality of life.

A 13-year-old, 10-kg neutered male Shiba Inu presented for erythema on the plantar and palmar surfaces and pruritus and interdigital crusting of all 4 feet.

The skin disease had a gradual onset of approximately 2 months. Clinical signs included licking and chewing of the feet as well as licking of the perianal area, with subsequent development of erythema, crusts, and hyperkeratotic changes of the footpads. Pruritus was most severe in the feet. The clinical signs were not seasonal.

The owner also noticed tremors that lasted approximately 15 minutes and irregular sleep/wake patterns. The dog had been previously diagnosed with glaucoma, which was managed with 1% prednisolone acetate drops and lanoprost ophthalmic solution. No coughing, sneezing, vomiting, or diarrhea was reported.

The dog was the only pet in the house and an indoor/outdoor dog. He was current on immunizations and received monthly heartworm and topical flea and tick preventives. The dog’s diet consisted of a dry kibble supplemented with cooked chicken. Weight loss was not noted; water and food intake was within normal limits.

The dog was seen by another veterinarian 2 months previously for inflamed footpads and pododermatitis.

All medications had minimal effect. The best results were achieved after initial application of hydrocortisone cream. At presentation, the dog was receiving cephalexin and chlorpheniramine.

The dog was extremely pruritic and rubbed his face on the carpet constantly. Additional clinical signs included:

The dog was alert and responsive to stimuli. Body condition score was 3.5/9. The dog was nonvisual and a prosthetic global implant was noted in the right eye (OD). Corneal scarring and a minimal menace response were noted in the left eye (OS).

A CBC, serum biochemical profile, and urinalysis were submitted for in-house testing. The results of the CBC and urinalysis were unremarkable. The cytologist reported the presence of occasional target cells, which can be associated with liver disease.

The skin scrape provided no evidence to suggest demodicosis. The cutaneous cytology demonstrated gram-positive cocci with no evidence of yeast. The Wood’s lamp examination was negative, and the dermatophyte culture could not rule out dermatophytosis until complete.

Radiography and abdominal ultrasound were indicated due to the elevated liver enzymes and bilirubin. The dog was discharged with cephalexin (22 mg/kg PO Q 12 H) and chlorpheniramine (4 mg PO Q 12 H) with instructions to return the following day for the imaging studies. Based on the results of imaging, an adrenocorticotropic hormone (ACTH)-stimulation test and/or skin biopsy of the feet were potential considerations.

The next morning, the dog was sedated with butorphanol (0.1 mg/kg IM) and radiographs of the abdomen were taken. The radiographs showed irregularity in shape of the ventral margin of the liver and focal caudal displacement of the right aspect of the transverse colon (Figure 1).

Figure 1. (A) Lateral and (B) ventrodorsal radiographs of the abdomen 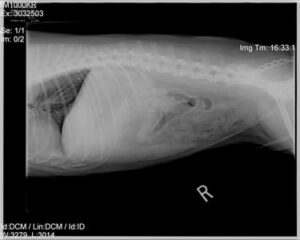 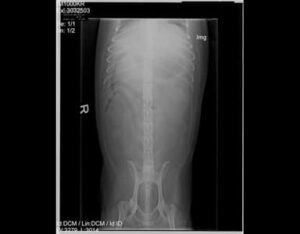 Ultrasound of the liver showed a severely irregular shape with nodular, coarse parenchyma. Hypoechoic nodules ranging in size from 0.4 cm to 2.2 cm were seen diffusely in all liver lobes, which coalesced to form a reticular, “honeycomb” appearance. A well circumscribed mass (3.3 cm × 3 cm) with a normal hepatic echogenicity was found in the right liver (Figure 2).

Figure 2. Ultrasound image of liver gall bladder demonstrating the “honeycomb” appearance (A and B) 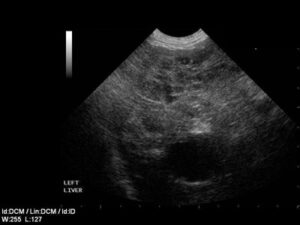 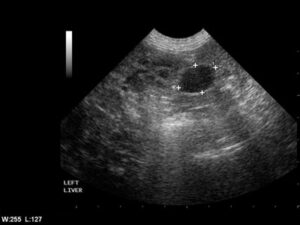 A small, hypoechoic nodule in the caudal cortex of the left kidney (6.5 mm × 4.2 mm) produced distal acoustic enhancement. The pancreas was prominent and moderately hypoechoic with hyperechoic striations and stippling throughout the parenchyma). No abnormalities were noted with regard to the size, shape, or consistency of the adrenal glands.

Preferential consideration was given to possible hepatocutaneous syndrome; neoplasia was less likely.

Based upon radiographic and ultrasonographic findings, as well as previous historical findings, an ACTH-stimulation test was not performed.

The patient was prepared for biopsy of the feet and footpads. After administering a lidocaine block (0.1 mg/kg SC), samples were obtained from the left front and right hind feet using a 6-mm circular punch biopsy instrument. The samples were submitted to a pathologist for histopathologic evaluation. The dog was discharged with tramadol (5 mg/kg PO Q 12 H), an opioid class of analgesic.

The owner declined biopsy due to concerns regarding anesthesia but did elect to pursue glucagon and ammonia measurements.

Both ammonia and glucagon levels were within normal limits. Based upon these levels, the liver was eliminating ammonia normally. The possibility of a glucagonoma as the cause of skin disease was less likely. Without a hepatic biopsy, neoplasia could not be ruled out definitively; however, the ultrasound report listed neoplasia as very unlikely. Therefore, the patient was treated for HCS.

What You Need to Know About…Hepatocutaneous Syndrome

HCS is generally considered a rare disease in the veterinary literature with 1 institution reporting only 0.3% of all nonneoplastic skin biopsy samples having changes consistent with the disease.1 Although most commonly reported in canines; it has been diagnosed in felines and captive black rhinoceros populations in the United States.

Known by other names, such as superficial necrolytic dermatitis (SND), metabolic epidermal necrolysis (MEN), diabetic dermatopathy, and necrolytic migratory erythema (NME), HCS is a progressive dermatologic disorder that typically develops secondary to hepatic dysfunction. The term HCS is given when evidence of hepatic abnormalities are present. MEN, SND, and NME are used to describe the dermatologic component.2

Although this syndrome is primarily diagnosed in dogs, its human counterpart is referred to as NME. It is associated primarily with a pancreatic endocrine tumor, whereas in dogs, HCS is associated with glucagonomas in only in a minority of cases.3

Currently published supportive therapy for HCS is multifaceted and consists of:

Parenteral amino acid supplementation is the symptomatic treatment of choice for improving skin lesions in animals with chronic liver disease and may prolong survival time by several months. Treatments, which may be repeated every 7 to 10 days as needed, may result in improvement in 1 to 3 weeks.4 If no improvement is noted by this time, then the prognosis is guarded.

The dog received amino acid supplementation, which was performed by administering hydromorphone (0.1 mg/kg) and midazolam (0.1 mg/kg) and placing a central line in the left jugular vein for administration of a 10% crystalline amino acid solution (Aminosyn, abbott.com). This solution is hypertonic and likely to cause thrombophlebitis if administered through a peripheral vein. It was dosed at 150 mLs of Aminosyn, which was added to 250 mLs of 0.9% sodium chloride for a total volume of 400 mLs administered over 10 hours.

A therapeutic plan was outlined with the owner and included:

The client was advised that the goal of therapy was to aid in resolution of clinical signs (itching, chewing, and licking the feet and perianal region) but that the therapy would not treat the liver disease. The SAMe may slow progression of liver damage but could not address the undiagnosed hepatopathy. The patient was scheduled for a recheck in 1 week.

Pedal pruritus in a dog may be related to atopy, food allergy, infection, or a wide variety of other dermatologic issues. A complete and thorough history combined with physical examination will help develop a list of differential diagnoses.

When the dog was presented 7 days later, the condition of the skin and feet had improved. The client was very pleased that the dog was less pruritic and more playful. The coat was growing and appeared thicker and shinier. The foot pads appeared less hyperkeratotic and devoid of fissures. The prescribed therapy was continued and another recheck scheduled.

The dog returned for evaluation 2 weeks after the first recheck. His attitude had regressed from alert and responsive to depressed. The seborrhea and interdigital crusting had returned and the feet were painful. The owner was concerned about quality of life and was not interested in repeating parenteral amino acid therapy. Humane euthanasia was elected.

Joel D. Ray, DVM, MS, is an assistant clinical professor at Mississippi State University. He is also the assistant service chief for Community Veterinary Services at the Animal Health Center at MSU. Dr. Ray coordinates the small animal internal medicine course for the veterinary technology students and lectures to both veterinary and graduate students. His research interests include innovative teaching methods and public health. Dr. Ray is the faculty coordinator and cofounder of the Pet Awareness with Students (PAWS) program, a student-led children’s public health educational program. He received his DVM and MS (with an emphasis in public health/preventive medicine) from Mississippi State University.