Cytology of Neoplasia: An Essential Component of Diagnosis 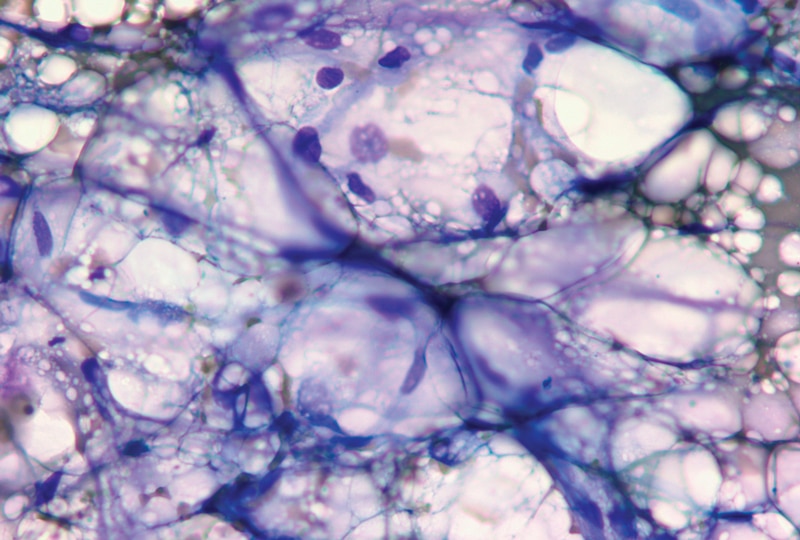 Cytology is a quick, easy, and inexpensive diagnostic tool. It is commonly used for the diagnosis of neoplastic processes.

However, cytology is not without limitations: due to lack of tissue architecture and variability of cellularity, cytologic diagnoses can be misinterpreted or inconclusive. Cytology is often used in conjunction with biopsy or additional cytochemical or immunocytochemical stains to improve specificity of diagnosis.

Many neoplasms present as discrete masses in the skin or subcutaneous tissue or within an organ. It is important to understand the cytology of healthy tissue cells in order to recognize a pathologic process, such as a tumor.

Classification is based on cellular morphology and tissue of origin, if recognizable. Cytologically, neoplasms are classified into 1 of 3 categories, with rare exceptions:

Benign neoplasms should consist of a uniform population of cells; however, it is essential that specimens be thoroughly evaluated for criteria of malignancy, which include:

Some text books classify melanomas as round cell tumors. However, the cells can exhibit features similar to epithelial, mesenchymal, and round cell tumors, occasionally in the same tumor, which is why they can be difficult to characterize. 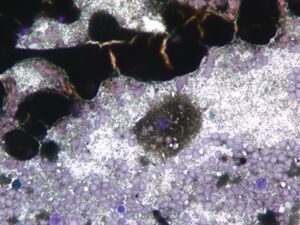 Figure A. Benign melanoma from a cat: The cells contain so many granules that individual cellular features are difficult to discern. (Wright-Giemsa stain; 1000x)

Benign melanomas generally contain so much pigment within the cytoplasm that it is difficult to fully evaluate the cellular detail. 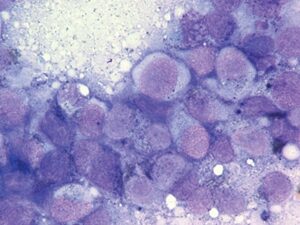 Figure B. Malignant melanoma from a dog: The cells exhibit obvious criteria of malignancy, including large prominent nucleoli, and have minimal granulation in the cytoplasm. (Wright-Giemsa stain; 1000x)

Malignant melanomas occur most commonly in the oral cavity or nail bed. They often have much less pigment than benign melanomas, making criteria of malignancy, such as a single large prominent nucleoli, easy to spot.

Epithelial cells commonly are cohesive; therefore, cytologically, epithelial tumors are arranged in tightly adhered clusters. The cells are often round with round nuclei, though some epithelial neoplasms, such as squamous cell carcinomas, can have atypical shapes.

N:C varies greatly depending on cell type and tissue of origin:

Some of the more common cutaneous epithelial tumors include:

Sebaceous adenomas are benign and fairly common in dogs but less so in cats.1 Surgical excision should be curative. See Table 1 for a list of cytologic characteristics.

Trichoblastomas (Figure 1) in dogs were previously known as benign basal cell tumors; they were reclassified as trichoblastomas because, histopathologically, the tumor shows differentiation of the hair germ of the developing follicle.2 They occur most commonly around the head and neck and occasionally metastasize. See Table 1 for a list of cytologic characteristics.3 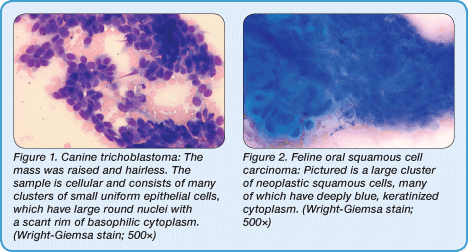 Squamous cell carcinomas (Figure 2) are the most common head and neck tumor,4 one of the most common epithelial tumors of the nose and paranasal sinus in cats,5 and a fairly common oral and nasal tumor in dogs. Cytologic diagnosis of squamous cell carcinoma can be straightforward; see Table 1 for a list of cytologic characteristics. These tumors are often ulcerated and necrotic so secondary suppurative inflammation is common.

Osteosarcomas (Figure 3) can be difficult to differentiate from other primary bone tumors. A cytochemical stain is available to help differentiate osteosarcoma from other mesenchymal tumors. One limitation of this stain is that normal or reactive osteoblasts will also stain positively; therefore, close examination of the aspirate for clear evidence of malignancy is recommended before this stain is performed.6 See Table 2 for a list of cytologic characteristics.

Hemangiosarcomas (Figure 4) can occur in multiple locations, including the spleen, liver, bone, skin, muscle, and heart. Thoracic and abdominal hemangiosarcomas are often accompanied by significant hemorrhage. Masses are often cavitated, making it difficult to obtain a diagnostic sample.

If possible, aspiration of a more solid portion of the mass is beneficial. See Table 2 for a list of cytologic characteristics. Histopathologically, hemangiosarcomas are occasionally described as epithelioid and have solid areas, which result in a more cellular aspirate.7

Soft tissue sarcoma (Figure 5) aspirates are often cellular and consist of aggregates and individualized mesenchymal cells. See Table 2 for a list of cytologic characteristics. However, these sarcomas cannot be classified as malignant based on cytology. Instead, histopathologic grading and immunohistochemistry are recommended to predict the behavior of these tumors.8

Lipomas (Figure 6) are benign tumors composed of mature adipocytes. Cytologically, a lipoma cannot be distinguished from subcutaneous adipose tissue. Grossly, the aspirate itself will consist of droplets of lipid that often rinse away during the staining process. Intact adipocytes are large cells with voluminous amounts of cytoplasm and small round nuclei. 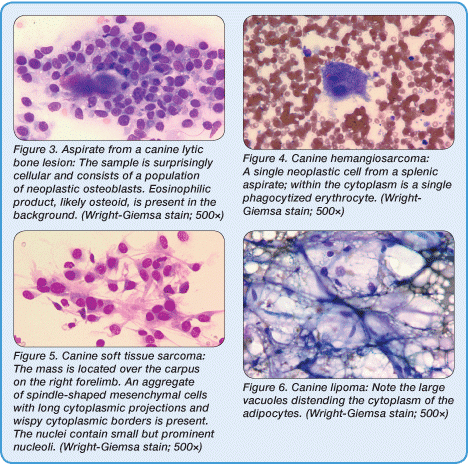 Appearance
These tumors have many similar features that include:

Types of Tumors
Round cell tumors consist of several different tumor types; the most common include:

Plasma cell tumors (Figure 7) can be difficult to distinguish from histiocytoma, especially if a prominent golgi apparatus is not visible. See Table 3 for a list of cytologic characteristics.

Histiocytomas (Figure 8) are only identified in dogs and commonly diagnosed in dogs less than 4 years of age.1 The neoplastic cell is a Langerhans cell or epidermal dendritic cell9 and often resolves on its own. See Table 3 for a list of cytologic characteristics.

Mast cell tumors (Figure 9) are the most common skin tumor in dogs.10 They can occur as single or multiple skin tumors and occasionally infiltrate the abdominal organs and bone marrow. Mast cell tumors cannot be graded on cytology; histopathology is required. Aspiration of the draining lymph nodes may be beneficial to determine the potential behavior of the tumor. See Table 3, page 16, for a list of cytologic characteristics.

Mast cell granules stain consistently with Giemsa, new methylene blue, and toluidine blue stains; however, they do not consistently stain with aqueous-based Romanowsky stains, such as Diff-Quik. When doing in-house cytology, it is important to leave at least 1 slide unstained; then if the slide is sent to a laboratory, the stains mentioned previously can be performed.

Lymphomas (Figure 10) are more commonly a pure population of large, intermediate or, less likely, small lymphocytes. They appear cytologically similar whether in lymph nodes, skin, or visceral organs. Biopsy with histopathology, polymerase chain reaction for T- and B-cell gene rearrangements, and immunocytochemical staining can be beneficial when characterizing or classifying this neoplasm. See Table 3 for a list of cytologic characteristics.

Transmissible venereal tumors (Figure 11) are found in dogs, wolves, and coyotes and transmitted primarily by physical contact.11 See Table 3 for a list of cytologic characteristics. 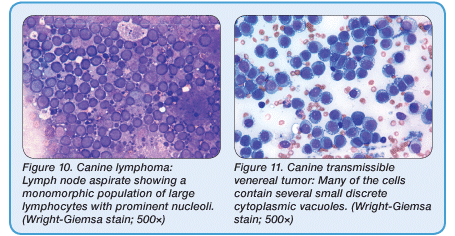 Cytology is a useful diagnostic tool, especially in the evaluation of neoplasia. It is a noninvasive technique with sometimes immediate results. Identification of a malignant process can be done easily in many cases and may assist veterinarians in planning the next diagnostic step.

Anne Barger, DVM, MS, Diplomate ACVP, is a clinical associate professor in pathobiology at the University of Illinois College of Veterinary Medicine and the section head of clinical pathology for its Veterinary Diagnostic Laboratory. Her research interests include immunocytochemistry, osteosarcoma, and cytology, and she is a prolific writer on these topics. Dr. Barger is a member of the American College of Veterinary Pathology’s exam committee and the American Society for Veterinary Clinical Pathology’s membership committee. She received her DVM and MS from University of Illinois and completed a residency in clinical pathology at North Carolina State University.