Cytology is one of the most important yet commonly underused tools in veterinary medicine. It is a quick, easy, and inexpensive means of gathering a tremendous amount of diagnostic information.

Chris Reeder, DVM, DACVD, is a graduate of Auburn University’s College of Veterinary Medicine and board-certified in veterinary dermatology. Dr. Reeder has published several articles both nationally and internationally and enjoys lecturing to local and national audiences on dermatology. He has served on several committees for the American College of Veterinary Dermatology, including the credentials committee and ad hoc exam committee. Dr. Reeder’s special interests include otitis externa, dermatopathology, and immune-mediated skin disease.

Cytology is one of the most important yet commonly underused tools in veterinary medicine. It is a quick, easy, and inexpensive means of gathering a tremendous amount of diagnostic information, much the same as running fecal floats, blood smears, and serum chemistries/complete blood counts. According to Christopher et al in the Journal of the American Veterinary Medical Association, “Cutaneous/subcutaneous cytology are most accurate for diagnosis of lesions, whereas liver cytology is least accurate.”1 Moreover, Ruocco et al report that “Exfoliative cytology for diagnostic purposes is rarely used in dermatology despite the rapid and reliable results which this procedure can offer in many clinical conditions.”2 Knowing how to take cytologic samples and how to interpret those samples can be critical to an animal’s health, disease management, and overall wellbeing.

The best method for obtaining material from the ear is with a cotton-tipped applicator; however, the health of the ear may limit access to sampling sites. For example, if a dog has end-stage proliferative ear disease, the degree of stenosis may make insertion of the applicator into the ear canal impossible. A 5-French red rubber catheter may be used to obtain samples from more stenotic ear canals. If a dog has a patent ear canal with a ruptured or absent tympanic membrane, sampling of the middle ear may be possible. In these cases, a red rubber or tomcat catheter can be used to obtain the sample while the patient is under general anesthesia. If the tympanic membrane is intact, a myringotomy using a spinal needle will be required. Specific techniques on myringotomy may be found in Mueller and Kirk’s Small Animal Dermatology, 7th edition.

Griffin et al found that heat fixing versus not heat fixing otic exudate on glass slides before staining did not increase or decrease the number of Malassezia yeast organisms found on cytologic evaluation.3 I prefer the slide to be heat fixed, then stained with a quick stain (eg, DiffQuik).

The slide should be heat fixed and a quick stain used for preparation.

In my experience, skin cytology is the diagnostic test most commonly missed in everyday referral cases. I find direct impression smears to be most rewarding. 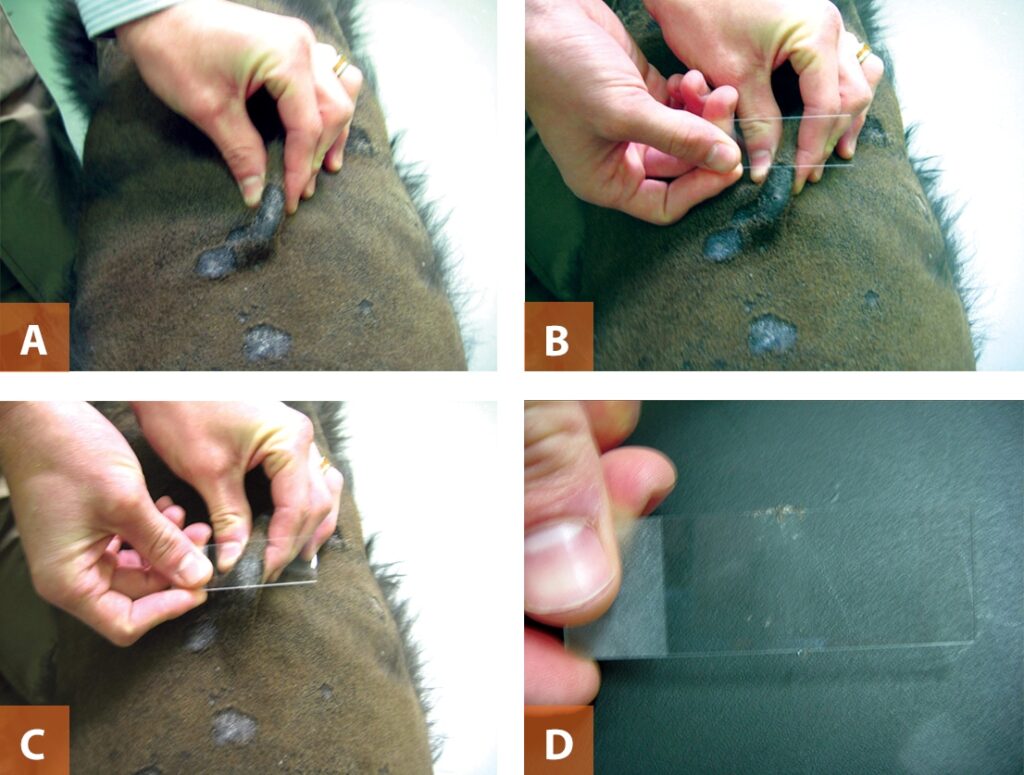 Always start at low power! The most common mistake made in viewing cytologic preparations is going directly to 100× magnification. Starting at 4× allows identification of specific areas of the slide for examination at higher powers. It also enables observation of findings that might be missed at 100×, such as acantholytic cells and Demodex mites (Figures 4 and 5). 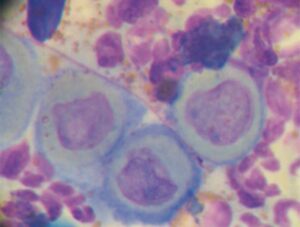 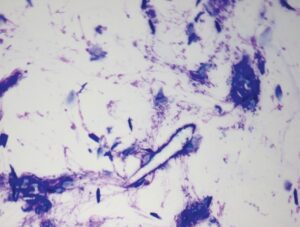 Inflammatory cells are seen in almost all skin cytologic examinations and occasionally on ear canal and claw fold cytology. The presence of different inflammatory cells may be a guide to suspect certain diseases, such as pemphigus complex, cutaneous lupus, mucocutaneous pyoderma, or even allergies.

Neutrophils are acute inflammatory cells that destroy infectious organisms and are the main component of pus. Intracellular bacteria should be scanned for because the presence of these bacteria is the true definition of skin infection. The presence of numerous bacteria with no intracellular bacteria may be the result of immunosuppression (eg, Cushing’s disease, hypothyroidism, neoplasia) or bacterial overgrowth. In light of current concerns about resistance to antimicrobial drugs, I recommend treating these cases topically with an antimicrobial product (eg, chlorhexidine, micronized silver, Triz EDTA) as the first step. Neutrophils release many proteolytic enzymes responsible for inflammation and tissue damage (Figure 6). 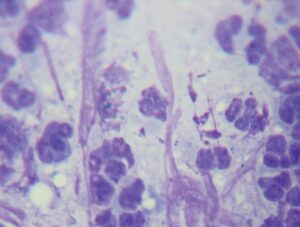 Eosinophils are filled with red (eosinophilic) granules (Figure 7). Eosinophils produce numerous cytokines and mediators to kill microorganisms and attract other cells, such as mast cells. These cells are also phagocytic and are capable of ingesting bacteria and fungi. Finding eosinophils on skin cytology suggests the presence of parasites, fungi, or food allergies. Eosinophils are rarely found in dogs with atopic dermatitis, although they are common in cats. 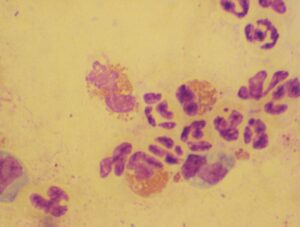 Lymphocytes are usually seen later in the course of skin disease and are not usually found in large numbers. Small, medium, and large lymphocytes may be seen. These cells direct activities of other cells (eg, neutrophils, eosinophils, keratinocytes) through the release of various messaging molecules, or cytokines. Large lymphocytes are sometimes seen in dogs with cutaneous lymphoma (Figure 8). 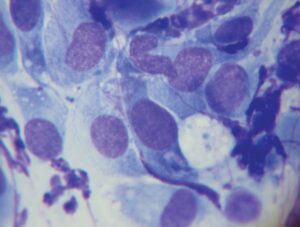 Mast cells are also found later in a disease process (Figure 9). They are the major producer of histamine and are involved to a large extent in allergic skin disease. Usually they are seen only in ulcerated areas of dermal mast cell tumors. 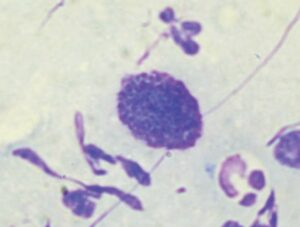 When cells rupture during sampling, nuclear content (DNA) is often seen on cytology. Nuclear streaming looks like fine threads of eosinophilic material (Figure 10). It does not indicate anything other than the rupturing of cells during sample collection. It can help to outline fungal spores, bacteria, and yeast, so look for these organisms in areas with larger amounts of nuclear streaming. 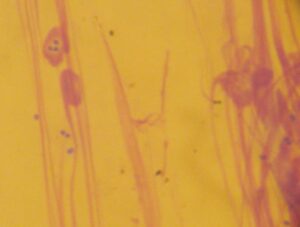 Demodex, Otodectes, scabies, or other mites may be visible on cytologic preparations if the infection is severe enough. These are large organisms and are best evaluated with 4× to 10× magnification. They are not common but are of diagnostic value if seen.

Fungal spores from dermatophytes (ringworm) can be seen within neutrophils, can be free, or can be present within nuclear streaming. These very small, round organisms have a clear halo and basophilic center (Figure 11). They are about half the size of an average red blood cell. 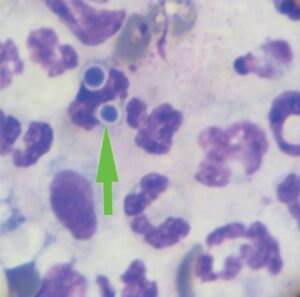 Bacteria are the most common infectious organisms I find on cytologic examination. Two distinct shapes are most common: cocci and rods. Cocci are round, basophilic bacteria found individually, in clusters, or in large groups (Figure 10). If intracellular cocci are found, a true infection is present. Rods are often found individually or in sets of 2 placed end to end, called diploid rods (Figure 12). Cocci are most often Staphylococcus or Streptococcus species. Rods are often Escherichia coli, Pseudomonas species, or Klebsiella species. Remember, quick stains stain all bacteria purple; they do not distinguish gram-positive from gram-negative bacteria. Bacterial cultures should be performed any time rods are seen on cytology. Bacteria always go in and out of focus when the fine focus on the microscope is used, whereas melanin granules have a refractory/reflective quality. 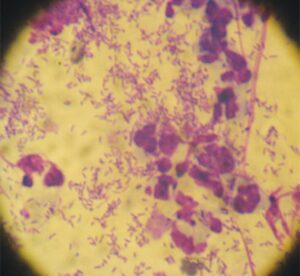 Melanin granules are commonly mistaken for bacteria and are normally seen on pigmented areas of the skin. They are golden to brown in color and mostly rod-shaped; they have a refractive/reflective quality when going in and out of fine focus (Figure 13). Melanin granules are usually seen attached to keratinocytes, but they can be seen free on the slide. 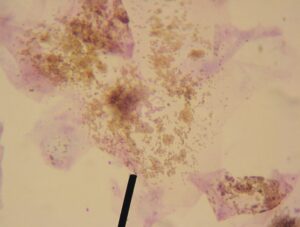 Most keratinocytes are octagonal to square and squamous in composition. Keratinocytes may display some interesting features that may be normal or abnormal, such as inclusion of keratohyaline granules or rounded acantholytic cells.

These granules are present in immature skin cells in the granular layer and are involved in “cementing” the cells together when fully mature. All species have these granules, which may be seen in keratinocytes that are chronically irritated (eg, in allergic dogs/cats). Keratohyaline granules are large eosinophilic granules. Dogs have round granules and cats have rod-shaped granules (similar to eosinophils; Figure 14).

These keratinocytes have lost their intercellular connections deeper in the epidermis and are usually found in animals with immune-mediated disease, such as pemphigus. Occasionally, severe bacterial infections and dermatophytosis can cause these cells to develop. Acantholytic cells are “fried egg”–shaped, with a deeply basophilic, centrally located nucleus (Figure 4). These are very important to recognize and are considered abnormal in any animal. 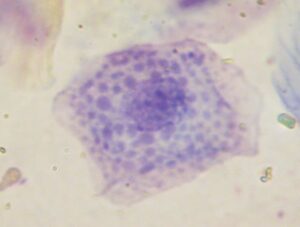