Lymph Node Cytology: What Should & Should Not Be There 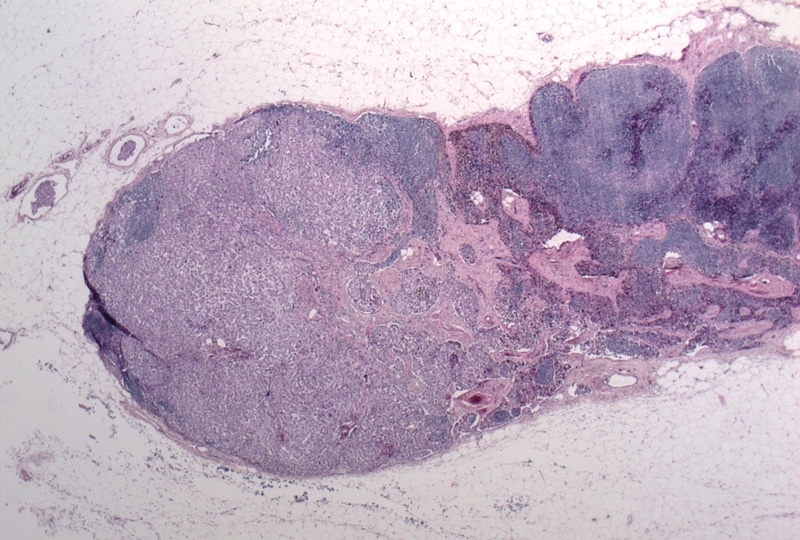 Lymph node cytology results can strongly influence treatment and outcome for cancer patients. In this article, Dr. Selting discusses the necessary steps for identifying and aspirating the appropriate lymph nodes and for evaluating the cytologic results.

At the time of cancer diagnosis, the clinician’s first task is to determine disease extent within the body, that is, to stage the cancer.

With practice, enough information can be gained from lymph node cytology to allow the general practitioner to begin a dialogue with pet owners about concern for metastatic cancer and its impact on prognosis.

This article reviews normal and abnormal lymph node cytology in both solid and round/discrete cell (hemolymphatic) tumors from the perspective of an oncologist.

Cancer can metastasize via lymphatics or blood vessels (hematogenously):

Regardless of tumor type, regional lymph node cytology should be included in the first wave of diagnostics for most cancers.

While metastasis to an unexpected lymph node is always possible, the important lymph nodes to aspirate at time of staging are:

For several tumors, including melanoma and mast cell tumor, metastasis can be identified even if lymph nodes are of normal size.1 In addition to screening for metastasis of solid tumors, lymphoma is often easily diagnosed using lymph node aspiration and cytology.

In one large case series of dogs with osteosarcoma, incidence of lymph node metastasis was only 4%, but the median disease-free interval was only 48 days in dogs with “positive” lymph nodes compared with 238 days for dogs with unaffected lymph nodes.2

When evaluating metastatic solid tumors, the primary draining lymph node that should be sampled depends upon location (eg, popliteal node for a hind foot digital tumor). Tumors located in areas of the body where lymphatic drainage is not clear, such as on the lateral thorax, can be challenging. In this situation, the nearest major lymph node should be aspirated if it can be isolated, though at times this is not possible and lymph nodes are noted as within normal limits without cytologic interpretation.

Reactive lymph nodes are characterized by increased numbers of plasma cells, notable due to their deeply basophilic cytoplasm and perinuclear clear zone.

Other findings that do not belong in lymph nodes include infectious organisms, which may be seen against a background of reactive lymphocytes and inflammatory cells. Fungal and bacterial causes of lymphadenopathy can stimulate increased numbers of macrophages and neutrophils.

When isolating a lymph node:

For example, to isolate the prescapular/superficial cervical node:

While each practitioner will develop their own feel for lymph node palpation, this technique may help isolate the deeper and more elusive lymph nodes.

Normal sized lymph nodes can sometimes be difficult to palpate and properly aspirate, especially in overweight or heavily muscled (eg, Staffordshire terrier, some Labrador retriever) dogs. To increase the chance of success, before isolating the node itself:

Note: If you stain a slide in-house using rapid fixation stains in preparation for laboratory evaluation, always send at least one unstained slide, which allows the clinical pathologist to apply his or her own stain. 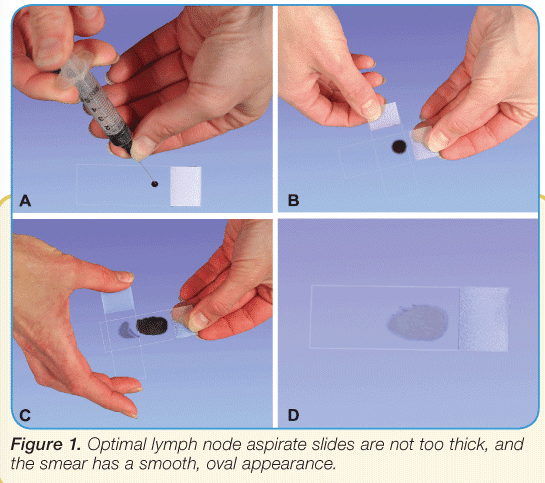 Size is important when determining whether the lymphoid population is of concern. Cell size is typically compared to a red blood cell (RBC), but neutrophils are less likely to fold and pile up, and are slightly larger than RBCs.

Therefore, if possible, the nucleus should be compared to a RBC, and the whole cell to a neutrophil, if any are present (Table 1).

After evaluating lymphocyte cell size, the next step in successful cytologic evaluation is to determine whether any other types of cells that represent metastasis to the node are present. If present, these cells can be categorized as mesenchymal, epithelial, or round/discrete. In addition, uncommon categories, such as neuroendocrine or histiocytic, may be relevant.

Finding cells where they do not belong, such as the presence of epithelial cells in a lymph node, is a sign of neoplasia.

Malignant cells are bizarre, and may not immediately resemble their cell of origin. While atypia can be seen in diseased tissue, the presence of cytologic changes outlined in Table 2, combined with lack of inflammation, is a strong indication of malignancy:

Fibroblasts can be misleading—tumors can elicit a scirrhous response in which reactive fibroblasts are present among an atypical population, potentially creating the impression of a mesenchymal neoplasm, when the primary malignant process has a different origin, such as carcinoma or mast cell tumor.

Mitotic figures can be seen in both normal and reactive lymph nodes as part of the normal renewal of lymphocytes. Mitotic figures that are concerning include those:

DIAGNOSES BASED ON LYMPH NODE CYTOLOGY

The most common finding on fine-needle aspiration and cytology of lymph nodes that are enlarged due to lymphoma is a monomorphic population of lymphoblasts (Figure 2). Characteristics of lymphoma identified by lymph node cytology are listed in Table 3. 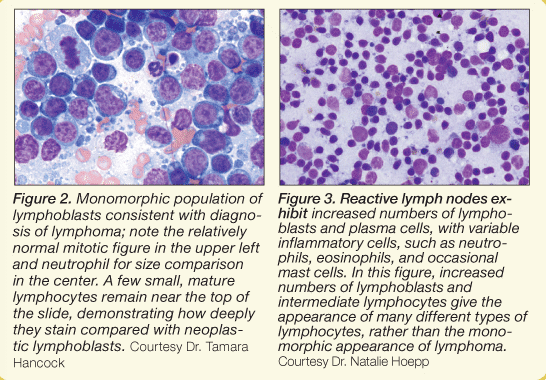 Comparison to RBCs or neutrophils can help with size determination. It is tempting to suspect lymphoma when a large population of lymphoblasts is seen; however, use caution and spend some time evaluating all the cells—there may be more small lymphocytes present than appreciated initially.

If an enlarged lymph node is reactive, there should be a population of plasma cells and inflammatory cells, and more variety to the lymphoid population (Figure 3).

Biopsy may be needed to confirm the diagnosis if only lymphoid cells—most of similar size (and intermediate or small)—are seen; however, lymphoma should be strongly suspected. This is especially true when multiple peripheral nodes are enlarged and the dog is asymptomatic, because infectious causes of lymphadenopathy more often lead to clinical signs of illness.

Histopathology can identify marginal and T-zone lymphomas that are indolent; biopsy specimens should ideally include the entire node and should be sent to a pathologist with expertise in this area. These lymphomas may not require treatment; if treated, they have a lower response rate to treatment but longer survival times.

When using flow cytometry, the laboratory that will be processing the sample should be contacted before sample collection, as special handling (suspending the aspirate in a specific medium, and overnight shipping on ice) is required.

PCR for Antigen Receptor Rearrangement (PARR) can be performed on aspirate slides when a diagnosis of lymphoma is elusive. With this technique, DNA of the variable regions encoding the immunoglobulin and T-cell receptors is amplified.

Thus, detection of monoclonal population of cells by PARR confirms the presence of neoplasia. False positive tests are rare, but may be seen with ehrlichiosis.

When lymph nodes are completely effaced with tumor cells, the diagnosis of metastatic neoplasia is often straightforward. However, in the absence of background lymphocytes, it can sometimes be difficult to determine with certainty whether the aspirated structure actually was a lymph node. In most cases, the sample contains small numbers of metastatic cells mixed with lymphocytes (Table 4).

Diagnosis based on cytology of a metastatic lymph node—even before the primary tumor is located—is not uncommon. One example is oral tumors: because owners do not routinely look inside their dogs’ mouths, they may present the pet because a mass was noted in the mandibular region (Figure 4).

Early metastasis can be challenging, because its presence can cause some degree of reactivity in the node (Figure 5) or, if metastasis to lymph nodes has occurred, in regions of the node that are not sampled by fine-needle aspiration.

Lymph node biopsy or removal for histopathology should be performed if there is concern for metastasis based on size or shape of a lymph node that cannot be confirmed on cytology. 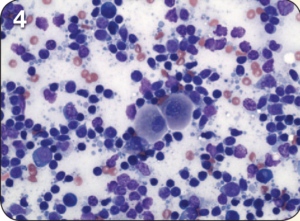 Figure 4. Squamous cell carcinoma metastasis to a lymph node: the abundant population of small lymphocytes in the background confirms lymph node origin, but the large, angular epithelial cells with abundant cytoplasm do not belong in a lymph node under any circumstance; note the occasional lymphoblast and plasma cell. Courtesy Dr. Natalie Hoepp 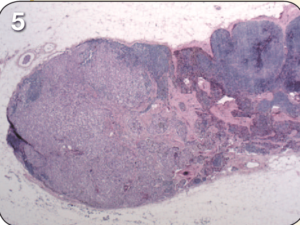 Figure 5. View (2×) of a sectioned histologic specimen of a lymph node showing the limitations of needle aspirates: On the left side of the image, the node is effaced with a neoplastic cell population, but the right side of the specimen shows a reactive lymph node population. Needle aspiration can miss a neoplastic population, and histopathology is recommended if there is clinical concern. Courtesy Dr. Tamara Hancock

Lymph nodes draining in the region of a mast cell tumor can be particularly troubling, because some mast cells are normally found in reactive lymph nodes. When reactive mast cells are recruited to local lymph nodes by cytokines produced by the mast cell tumor (ie, nonmetastatic mast cells), they are expected to infiltrate the node individually. In addition to metastatic mast cells found in lymph nodes meeting cytologic criteria of malignancy (Table 2), clustering of these cells (into aggregates) can also signify metastatic disease.4 When in doubt, the lymph node should be surgically removed and submitted for histopathology, perhaps at the time of initial mast cell surgery.

Lymph node involvement in mast cell tumors impacts both treatment and prognosis of these tumors. Locoregional treatment of a mast cell tumor with surgery, with or without radiation therapy to include a local lymph node, can be very successful unless metastasis has spread beyond the regional lymph node. 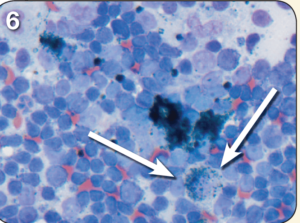 Figure 6. Melanophages, containing abundant dark pigment, can be seen in areas of chronic inflammation and other nonneoplastic pathology in draining lymph nodes. However, the more lightly granulated cell on the lower right (arrows) is a melanocyte, which should not be present in a lymph node and, therefore, is consistent with lymph node metastasis. Courtesy Dr. Erin Burton

Lymph node cytology can be performed quickly, as a minimally invasive procedure, and results can strongly influence treatment and outcome for cancer patients. Like any other skill, evaluation of cytology from a lymph node takes time and practice.

Kim A. Selting, DVM, MS, Diplomate ACVIM (Oncology) & ACVR (Radiation Oncology), is an associate teaching professor at University of Missouri. She developed an international searchable database to promote veterinary cancer clinical trials at vetcancertrials.org. She completed her DVM and specialty training at Colorado State University, with a rotating internship at the Animal Medical Center in New York City.