Intradermal allergy testing can be used to identify allergens to be included in immunotherapy.

Dr. Austel is an assistant clinical professor of veterinary dermatology at the University of Georgia College of Veterinary Medicine’s Department of Small Animal Medicine and Surgery. The past 24 years of her career have been dedicated to dermatology in academic and private practice settings in Europe and the U.S. Her clinical research interest focuses on canine atopic dermatitis and feline atopic skin syndrome. Her family includes 5 furry children, 3 of which have severe allergies.

Allergen immunotherapy (AIT), also known as desensitization or hyposensitization therapy, is used to treat environmental hypersensitivities in human and canine patients. It involves the gradual administration of increasing amounts of allergens for the purpose of inducing beneficial immunologic changes.1,2 In contrast to traditional pharmacologic therapy, AIT has the potential to influence the patient’s abnormal immune response and shift it toward a state of tolerance (FIGURE 1). The goal of successful AIT is induction and maintenance of clinical tolerance against offending allergens, leading to improvement or, ideally, elimination of clinical signs/symptoms and reduction or elimination of the need for additional pharmacologic treatments.1 To date, AIT is the only potentially disease-modifying and curative approach for type I hypersensitivity disorders.3 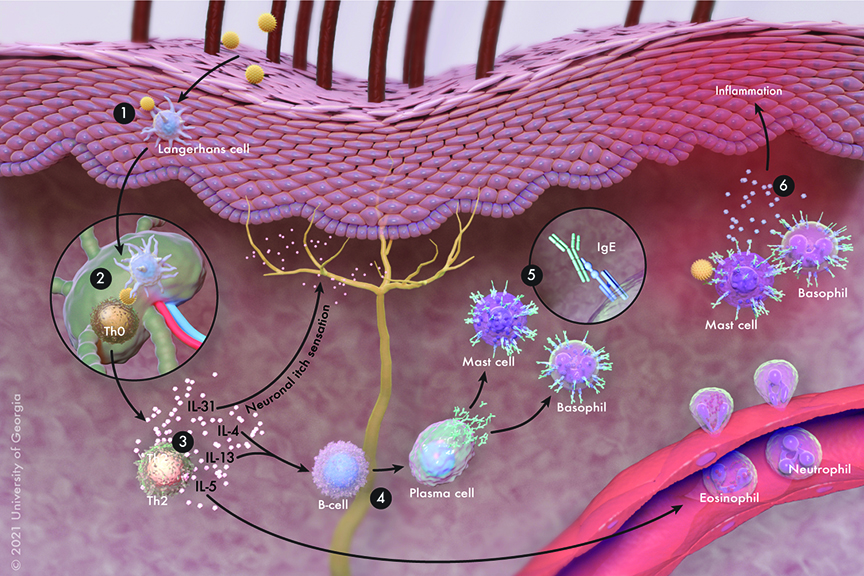 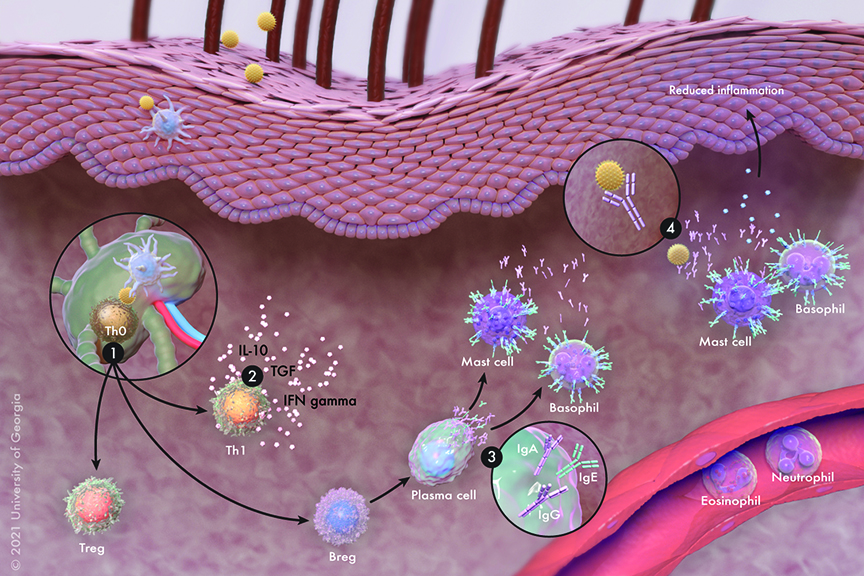 Subcutaneous allergen immunotherapy using pollen extracts for human patients with hay fever was introduced 110 years ago by Leonard Noon.4 This therapeutic approach was successfully applied to canine patients decades later and has remained a mainstay of treatment since.5 Although the principles of AIT remain the same, the current AIT modalities described in this article are more diverse. They vary in terms of administration route, administration regimen, adjuvantation, and specificity of allergens.

This type of AIT involves customized aqueous allergen mixes based on the patient’s specific history and intradermal or serologic (IgE) allergy test results.6 Depending on the AIT manufacturer and influenced by the prescriber’s preferences, up to 3 vials with increasing allergen concentrations (e.g., 200, 2000, or 20 000 to 40 000 protein nitrogen units [PNU]/mL) may be administered during the initial phase of treatment.7 Starting with the lowest allergen concentration, the solution is initially administered every 2 to 4 days. With slowly increasing injection volumes and AIT solution concentrations, the injection intervals gradually increase to every 7 to 30 days (depending on the AIT solution manufacturer and prescriber). After the injection volume and AIT solution concentration have reached their specific end points, and after injection intervals are no longer increased, the patient enters the maintenance phase, during which AIT is either continued at the established levels or gradually reduced over time. The maintenance phase may last several years or a lifetime. However, injection schedules may require adjustments based on the patient’s development and needs. Currently, there is no standardization of AIT solutions, concentrations, or injection schedules.8,9 Furthermore, there is no consensus on the maximum number of different allergens combined into 1 treatment vial.8,9 However, some findings indicate that to avoid pollen allergen degradation via residual mold protease activity, mold allergens should not be combined with pollen allergens in the same treatment vial.10,11 Reported efficacy of conventional nonadjuvanted AIT for canine patients is 19% to 70%; severe side effects have been reported for only 1% of patients.5,6,11,12 However, direct or objective comparison of studies is not possible due to the large variability in allergen concentrations, injection volumes, injection schedules, and outcome measures.

For this type of AIT, administration of conventional nonadjuvanted AIT during the initial phase of treatment is condensed into a 24-hour period, resulting in an average of 1 injection every 30 to 60 minutes.5,13 This approach brings the patient to the maintenance phase of AIT very quickly, and therapy can then be continued in the patient’s home setting. Although reports of severe adverse reactions to rush AIT in dogs are rare, rush AIT should be performed only for hospitalized patients under close supervision of a veterinarian. To date, the overall efficacy of rush nonadjuvanted subcutaneous AIT has not proven superior to conventional subcutaneous AIT.5

For decades, aluminum-precipitated allergen solutions have been used in canine patients in Europe; however, they are not commercially available in the United States. The adjuvant allows for longer injection intervals and thus fewer injections over time. Success rates for aluminum-precipitated subcutaneous AIT are comparable to those of conventional nonadjuvanted AIT, and the side effect profiles are similar.14 In Europe, rush AIT with aluminum-adjuvanted allergens has been successful and systemic side effects have been rare.15

For humans, the mainstay of AIT is recombinant major allergens. In veterinary medicine, only 1 such therapeutic is commercially available for canine patients and so far only in Japan. Allermmune HDM (Zenoaq, zenoaq.jp) contains Der f 2 protein (a major allergen of Dermatophagoides farinae, also known as house dust mite) conjugated with a polysaccharide polymer (pullulan). The therapeutic is administered subcutaneously according to a specific protocol and with increasing allergen concentrations. In a pilot study of 13 cases in Japan, overall efficacy was 84% after 120 days of treatment and no side effects were reported.16 In the United States, the author is aware of at least 1 study of Allermmune that has been conducted; however, data have not yet been published.

Intralymphatic immunotherapy (ILIT) consists of once-monthly injections of small quantities of aqueous allergen solutions (0.1 mL of 20 000 PNU/mL standard maintenance AIT solution) mixed with a small volume of aluminum adjuvant (0.1 mL of aluminum hydroxide). Because accurate placement into a peripheral lymph node is required, this form of AIT can only be performed by a veterinarian. A study of 22 dogs receiving 3 to 5 monthly ILIT injections reported good and long-lasting clinical response for 89% of dogs and only rare and minor side effects.17 A recent study (and the first of its kind in veterinary medicine) compared outcomes for dogs undergoing either subcutaneous, intralymphatic, or sublingual AIT. Treatment efficacy was the highest (80%) for the group that received 4 monthly ILIT injections followed by 8 monthly subcutaneous AIT injections.12 Treatment efficacy in the subcutaneous and sublingual AIT groups in this study reached 50% and 14%, respectively. These results are remarkable, given that sublingual AIT in this study was continued on a daily basis for 12 months but clinical efficacy remained much lower.

Oro-mucosal (sublingual) immunotherapy consists of oral administration of allergen solution in glycerin 1 to 2 times daily for extended periods (up to 1 year or longer). Allergen concentrations are typically not revealed by the different manufacturers. Allergens are absorbed via the oral mucous membranes, which possess increased potential for inducing immunologic tolerance.18 To allow sufficient time for the allergens to contact immunologic cells in the patient’s mucosa, the oral cavity must be empty when this AIT is administered; mixing this AIT with food or treats may render it ineffective. Although oro-mucosal AIT is considered a noninvasive form of AIT that may be preferred by many clients, the high number of individual interventions (oral applications) necessary over a long period requires client diligence and persistence. Clinical efficacy has been reported as good to excellent for up to 60% of canine patients.19 However, a recent prospective study of oro-mucosal AIT in a small number of dogs showed low clinical efficacy (14%) compared with subcutaneous or intralymphatic AIT. 12 Oro-mucosal AIT is considered safe and well tolerated in canine patients, and reported adverse reactions have been none to mild.12,19 This therapy may be safely administered to patients that previously exhibited adverse reactions with other AIT modalities.6

Standardized AIT, in contrast to customized AIT, consists of administration of a predefined set of 20 to 22 allergens deemed significant for the geographic region in which an individual patient resides. This approach eliminates the need for intradermal allergy testing or serum IgE measurements. Formulations for subcutaneous or oro-mucosal administration are available.

13. Mueller RS , Bettenay SV. Evaluation of the safety of an abbreviated course of injections of allergen extracts (rush immunotherapy) for the treatment of dogs with atopic dermatitis. Am J Vet Res. 2001;62(3):307-310.

Allergic Dermatitis in Canines and Felines