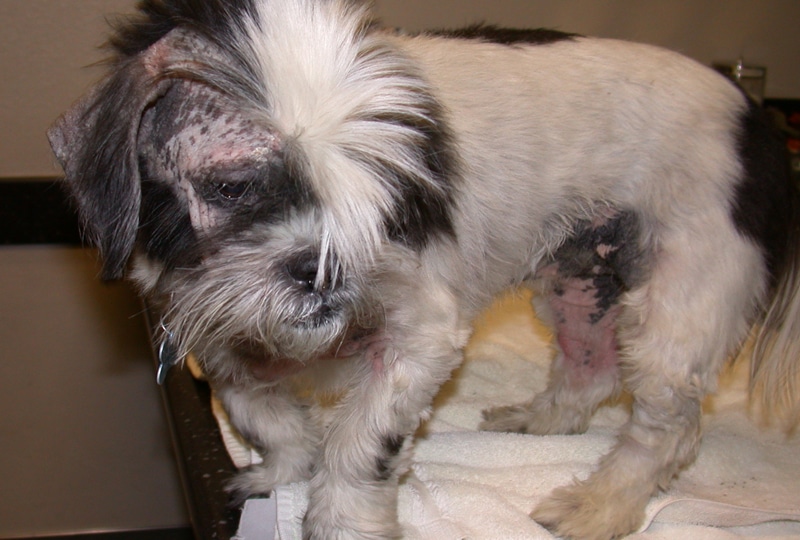 • Canine pyoderma is a bacterial skin disease usually caused by Staphylococcus pseudintermedius (previously known as Staphylococcus intermedius).1
• S pseudintermedius is a gram-positive, coagulase-positive cocci bacteria, which is considered part of the normal canine mucosal flora and cultured from 37% to 41% of normal dogs.2,3
• Less common bacterial species found in canine pyodermas include S aureus (4.7%–8.3% of cases, usually human origin) and S schleiferi (19%–28% of cases).4-6

Mean inhibitory concentration (MIC) is usually based on blood levels of an antibiotic, and is the minimal antibiotic concentration needed to inhibit bacterial growth. When the MIC exceeds the concentration of drug that can be safely achieved in the bloodstream, then the organism is deemed resistant.Bacterial Mutation & Resistance
MIC is based on standardized bacterial inoculums (105 CFU/mL) exposed to varying drug concentrations in a test tube, and it varies with both the drug and the bacterial species targeted.
• Since MIC does not equal complete killing of all bacteria, bacterial mutation and resistance is a concern.
• Patients with normal intact immune systems: Inhibition of the susceptible bacterial population allows immune clearance of infection, including resistant mutants.
• Immunocompromised patients, those with prior infection or previous exposure to antibiotics, or those in which therapy for acute infection fails: Continued proliferation of resistant mutants may occur.
• When a high-density bacterial population is exposed to an antimicrobial agent, it only requires one spontaneous mutation to the exposed agent for the culture to become a > 1012 population of resistant bacteria following overnight incubation.1

Measuring Mutant Prevention
Recently, the mutant prevention concentration (MPC) has been described as a novel measurement of in vitro bacterial susceptibility or resistance. MPC defines the lowest drug concentration required to block the growth of the least susceptible bacterium present in the tested population.
MPC is based on the testing of a larger bacterial inoculum (>= 109 CFU/mL), which:
• More closely approximates bacterial load in actual infections
• Takes into account the probability of mutant subpopulations being present in high-density bacterial populations.1,2
Dosing based on MPC drug concentration may reduce overall bacterial numbers as well as prevent the selective amplification of the resistant subpopulation. As with MIC, MPC varies with both the antimicrobial and bacterial species targeted.

Minimizing Mutation Development
The mutant selection window (MSW) defines the danger zone for therapeutic drug concentrations, and is bordered by the MIC and the MPC values. Minimizing the length of time that an antibiotic concentration remains in the MSW may reduce the likelihood for development of resistance during therapy.

Achieving Optimal Antibiotic Dosing
MPC values, when considered with antimicrobial pharmacology, may allow more accurate prediction of probability of resistance when bacteria are exposed to antibiotics during therapy for infectious diseases. With the increasing emergence of resistant infections, resistance prevention should be an important goal of antimicrobial therapy.1-3
Hopefully, MPC and MSW values may eventually become more widely available from reference laboratories and allow for optimal antibiotic dosing, reducing antimicrobial resistance.

Transmission
The perineum and nasal mucosa are primary colonization sites, and bacteria can be transferred to other body sites via licking and grooming.2
• S pseudintermedius can be an opportunistic pathogen and create infection in dogs with underlying conditions that compromise the normal skin barrier or immune function.
• Similar to S aureus, S pseudintermedius produces virulence factors to enhance infection, such as coagulase, proteases, thermonuclease, and toxins (ie, haemolysins, exfoliative toxins, enterotoxins). It also has the ability to bind to fibrinogen, fibronectin, and cytokeratin, as well as form biofilms.1

In one prospective study of 30 cases of canine recurrent pyoderma:8
• Atopic dermatitis was found in 60% of cases. Atopic dogs are prone to recurrent skin infections due to increased adherence of staphylococcal bacteria to atopic canine skin cells,9-11 alterations in normal skin barrier function,12 and altered skin immune system function.13,14
• Food allergy, flea allergy, and hypothyroidism each accounted for 7% of cases.
• Hyperestrogenism, demodicosis, and zinc-responsive dermatosis each accounted for 4% of cases.
• In only 2 dogs were underlying causes unidentified.

Clinical Signs
Canine pyoderma can be nonpruritic or minimally to markedly pruritic. Clinical signs can vary with the:
• Depth of infection (superficial versus deep)
• Location of infection (ie, haired versus nonhaired skin, mucocutaneous junctions, skin folds)
• Breed of dog (in some cases).
The variable manifestations of pyoderma are listed in Tables 2, page 33, and 3, page 35. These tables will be repeated in the next article and will include figures and treatment recommendations.

Lesion Distribution & Appearance
Lesion distribution in cases of canine pyoderma:
• May be localized or generalized
• Can depend on the underlying cause
In pruritic dogs, lesions commonly occur in areas of self trauma and then spread
In dogs with endocrinopathies, lesions commonly begin on the trunk, then spread and become pruritic after development of infection.7
Clinical recognition of pyoderma can be complicated by differences in disease presentation, including area of the body affected and variations in coat length and breed of dog. 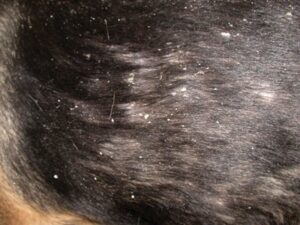 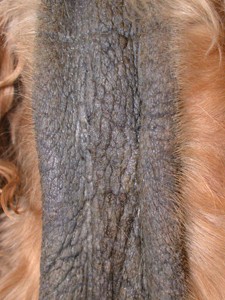 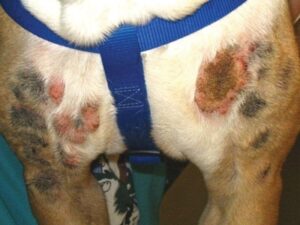 • Pyoderma on the thinly haired inguinal area may be easy to identify, but the same lesions on the thickly haired dorsal and lateral trunk may be harder to notice.
• Short-coated dogs with folliculitis can present with raised tufts of hair on the trunk that can be confused with urticaria; however, lesions are not evanescent as occurs in urticarial lesions, and eventually hair is lost, leaving a moth-eaten appearance of the hair coat (Figure 8, page 36). 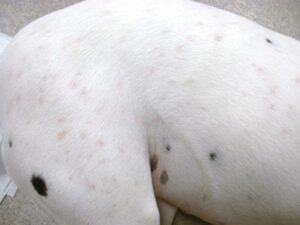 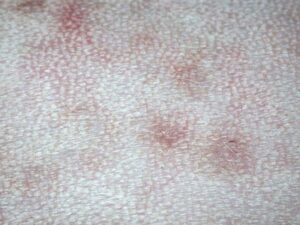 • In chronic lesions of pyoderma, lichenification can develop that may appear identical to Malassezia infection (Figure 10, page 36). 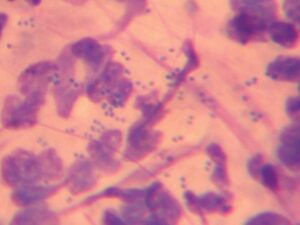 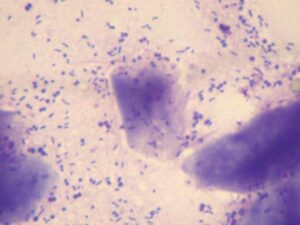 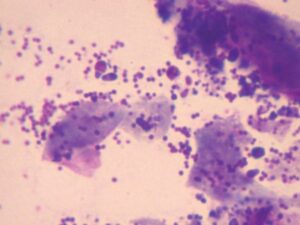 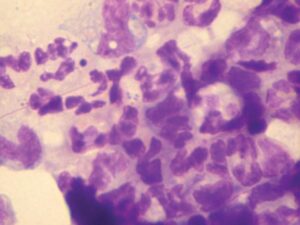 • Shar-peis often diffusely lose hair due to folliculitis, with minimal to no associated skin inflammation or visible papules.
• Cocker spaniels may present with crusted plaques and follicular casting as a manifestation of pyoderma that can be mistaken for idiopathic or primary seborrhea (a far rarer diagnosis) and lead to inappropriate diagnosis and therapy.
• Shetland sheep dogs often develop large superficial spreading areas of alopecia, erythema, and scaling.

Cytology
Collection
• Impression cytology: Impression cytology of an exudative or lichenified lesion or a ruptured pustule directly onto a slide is easy to obtain.
• Skin scrapings: Drier lesions, such as scaly areas or epidermal collarettes, can be sampled by collecting skin debris on a dull dry scalpel blade or spatula, smearing the debris on a slide, and then staining it with Diff-Quik or similar stain.
• Tape preparation: Clear acetate tape preparation of an affected area can be applied onto a slide over a drop of blue stain. 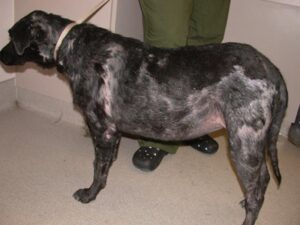 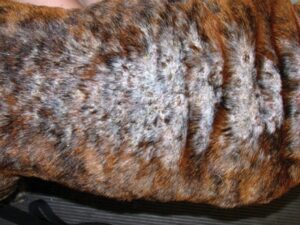 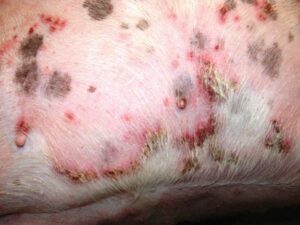 • In bacterial overgrowth syndrome, numerous extracellular bacteria are seen, which can include mixed flora with rod-shaped bacteria with or without Malassezia (Figures 15–16). 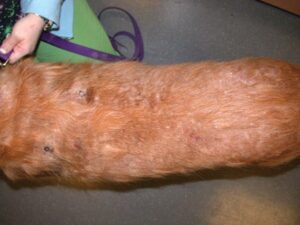 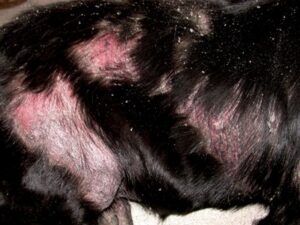 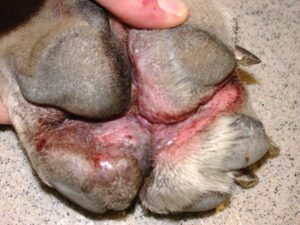 • In cases of deep pyoderma, marked pyogranulomatous inflammation is usually seen, and organisms may be few in number (Figure 17).

Culture & Sensitivity
When to Culture
Culture and sensitivity of skin lesions associated with pyoderma is recommended if:
• There is no clinical response and bacteria persist cytologically despite empiric antibiotic therapy (especially if a patient with recurrent pyoderma has been treated with multiple antibiotics) or if there is a history of multidrug- or methicillin-resistant infections
• If primarily rod-shaped bacteria are found on cytology of lesions
• In cases of deep pyoderma.7

Culture Techniques
Culture can be obtained with a sterile culturette via:
• Swabbing contents of a freshly ruptured pustule
• Swabbing debris or exudate under an intact crust or under the rim of an epidermal collarette
• Obtaining a 4- to 6-mm punch biopsy of a papule or pustule for macerated aerobic tissue culture (the biopsy sample is placed in a red top tube with 0.25 mL sterile saline).
Since lidocaine has antibacterial activity, biopsies for culture should ideally be collected under sedation or general anesthesia.7

Sensitivity Testing
Sensitivity is usually tested by either:
• Agar diffusion and disk process (ie, Kirby Bauer, which may be more indicative of topical antibiotic concentrations achievable at surface infections, such as otitis)
• Broth diffusion technique, resulting in determination of the mean inhibitory concentration (MIC).
Antimicrobial susceptibility or resistance is then determined by comparing the measured MIC value to previously established breakpoints that take into account the drug’s in vitro activity, achievable and sustainable drug concentrations in the host, drug pharmacokinetics, and drug toxicity.15 See The Three Ms: MIC, MCP, & MSW (page 32) for further information.

Histopathology
Biopsy of lesions is recommended if:
• There is a poor response to antibiotics based on culture
• No organisms are identified on cytology or culture
• There is an unusual distribution (ie, facial, pinnal, or footpad lesions are suggestive of immune-mediated disease) or appearance of skin lesions.
Canine demodicosis can sometimes be difficult to find in very scarred, fibrotic areas, such as the feet or in the shar-pei breed, and may require biopsy for diagnosis.

Kimberly S. Coyner, DVM, Diplomate ACVD, received her DVM from Colorado State University. After a private referral practice internship and a year practicing emergency medicine, she completed a 2-year teaching position and then a 3-year residency position in dermatology at the University of Georgia. Dr. Coyner has authored several book chapters in the field of dermatology—Morgan’s Handbook of Small Animal Practice, 4th edition (2002) and Small Animal Dermatology Color Atlas and Therapeutic Guide (2001 and 2006)—as well as articles in Veterinary Dermatology, Veterinary Medicine, and The Compendium on Continuing Education for the Practicing Veterinarian. She is currently in private practice at the Dermatology Clinic for Animals of Las Vegas.
MIC = mean inhibitory concentration