This article explores 3 immune-mediated skin diseases in cats to give practitioners a clearer picture of signalment, diagnosis, and treatment options for these uncommon diseases.

Immune-mediated dermatoses in cats are uncommon to rare and in some cases pose challenges in terms of the choice of treatment for induction and maintenance of clinical remission. This article addresses 3 immune-mediated skin diseases in cats—plasma cell pododermatitis (PCP), proliferative and necrotizing otitis externa (PNOE), and auricular chondritis (AC)—and reviews the signalment, clinical and histopathologic features, diagnosis, treatments, and outcomes. Information in this article is based on the combination of published supporting evidence as well as the author’s clinical experience.

PCP, also known as pillow foot, is an uncommon skin disease that has a clinically distinct feature: only the paw pads are affected. Two cases of plasma cell dermatitis affecting the nose and/or nose bridge without involvement of the paw pads have been reported.1,2 However, this poorly understood condition will not be discussed in detail in this article as it is unknown whether it is a rare variant of feline PCP or an entirely separate condition.

The etiopathogenesis of PCP is poorly understood. Some cats with PCP are concurrently infected with feline leukemia virus (FeLV) and/or feline immunodeficiency virus (FIV).3-5 For one cat, immunohistochemistry (IHC) of a skin biopsy sample from the affected paw pad showed positive reactivity for FeLV,3 and in another cat FIV immunoreactive cells were detected.6 According to one abstract, 5 cats were positive for FIV by polymerase chain reaction of biopsy samples of skin lesions.4 It is unknown if the FIV and/or FeLV infection(s) contributed to the pathogenesis of PCP or if these cats had 2 unrelated and concurrent conditions. The positive response to immunosuppressive and/or immunomodulatory drugs in cats with PCP suggests that this condition may also be associated with an aberrant immune response.

Most cats with PCP are domestic shorthair cats, but PCP has been reported in cats of other breeds (e.g., European shorthair,7-10 Siamese,11,12 mixed breeds,3,13,14 Oriental shorthair,15 British blue,15 Balinese,15 Tonkinese15). Male cats seemed to be more frequently affected than female cats; of 66 cats in 5 reports that included ≥5 cats, 70% were either intact or neutered male cats.4,5,11,12,15

A clinical diagnosis of feline PCP can be based on the distinct skin lesions that are confined to the paw pads. The affected pads are often swollen and soft and exhibit striations and/or scaling/exfoliation (FIGURE 1). 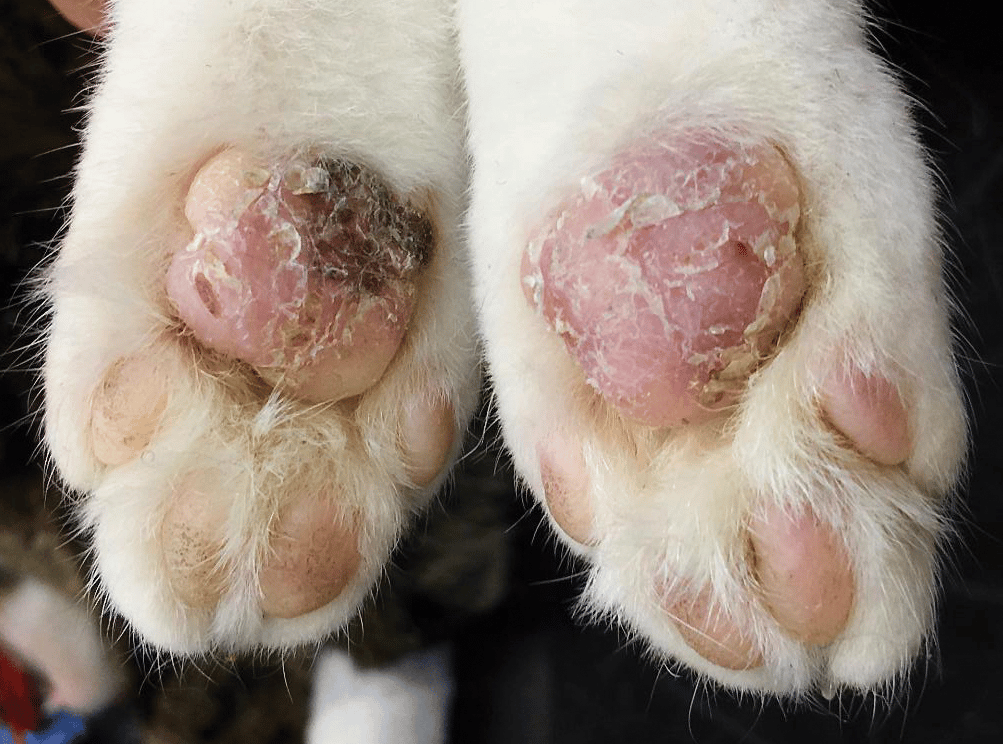 As the disease progresses, ulceration with granulation tissue and hemorrhage can develop (FIGURE 2). In cats with light-colored paw pads, discoloration has been reported, ranging from depigmentation16 and erythema5 to violaceous (purplish) (FIGURE 3).3,8,13 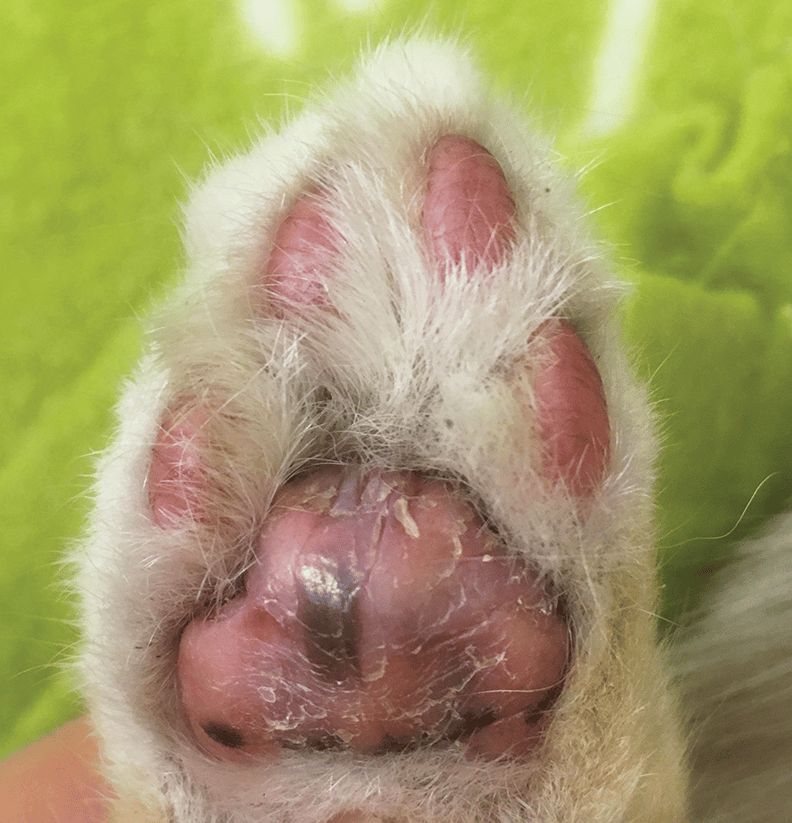 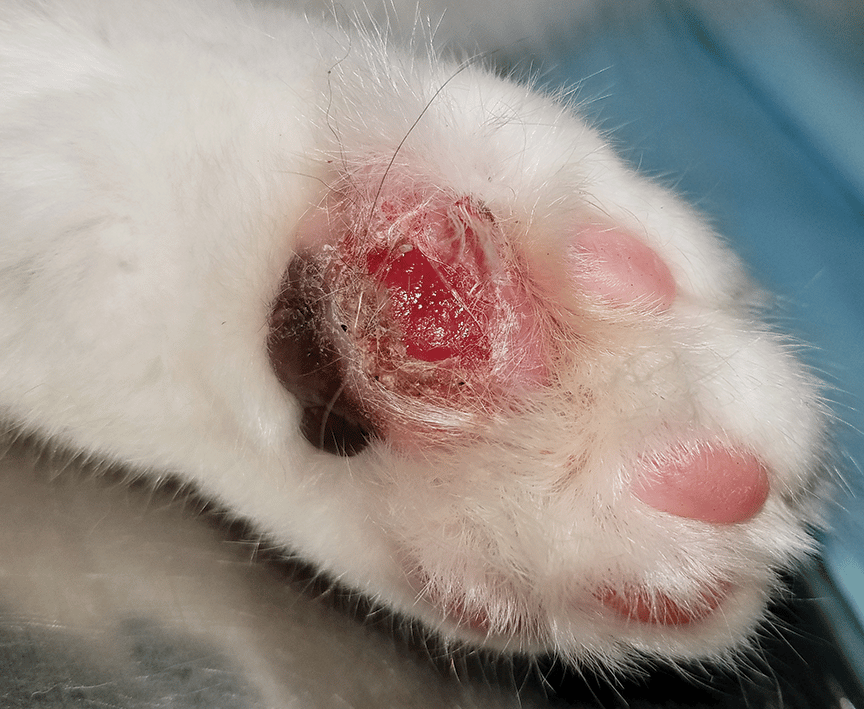 The affected paw pads could be painful and result in lameness. Of note, more than 70% (n = 41) of cats with this condition were presented to the veterinarian with a primary complaint of lameness and/or pain.4,7-10,14,17,18 The number of paws affected varies from 1 to all 4; most commonly affected are the metacarpal and metatarsal pads, but digital pads can also be affected along with the metacarpal and/or metatarsal pads. For 2 cats, the accessory pads were affected.12 Most cats with PCP are otherwise healthy, although for a few cats, reported concurrent systemic signs were emaciation,3,18 conjunctivitis/blepharitis,13,18 lymphadenopathy,13,18 and pale mucous membranes.7,14,19 Four cats with PCP were reported to have concurrent oral lesions.4,20

Diagnosis can be confirmed via biopsy of paw pad lesions. Histopathologic appearance consists of dermal and adipose tissue infiltration with plasma cells, obscuring normal architecture. Often plasma cells contain Russell bodies, and they are referred to as Mott cells.21 If sedation for biopsy is contraindicated, fine-needle aspirate from the affected paw pad(s) may show large numbers of plasma cells and can be a valuable tool for a PCP diagnosis.

Most cats with PCP require treatment; spontaneous resolution without treatment has been reported for only 4 cats.12,15,20 Of note, 1 of the cats for which the disease spontaneously resolved in winter experienced a relapse in summer for 2 years.12

Medical therapies that effectively induce clinical remission include oral glucocorticoids, long-acting glucocorticoids (e.g., methylprednisolone acetate), doxycycline, and cyclosporine. Aurothioglucose
(no longer available) has been reported to be effective in 3 cats.20 Surgery, with or without medical therapies, may be an option, especially if the ulcerated paw pads have abundant granulation tissue. For first-line therapy, the author prefers doxycycline (10 mg/kg PO q24h), and if that is ineffective, oral cyclosporine (7 mg/kg PO q24h) as second-line therapy. For most cats, clinical remission can be achieved in 8 weeks, although for 1 cat, time to clinical remission was up to 4 months. For that cat, clinical remission was achieved when oral prednisolone was changed to oral dexamethasone.19 The prognosis for feline PCP is fair to good as relapse is uncommon after clinical remission.

This rare condition was first described in a textbook of histopathology for cats and dogs, published in 2005.21 Since then, to the author’s knowledge, only 8 case reports have been published, involving a total of 13 cats.22-29

The etiology of PNOE is poorly understood; early studies using IHC on skin lesion biopsy samples had negative results for feline herpesvirus, feline calicivirus, and feline papillomavirus.23 That PNOE may be an immune-mediated disorder is strongly suggested by the histologic features of apoptotic keratinocytes and positive IHC staining for CD3+ T lymphocytes27,29 and active caspase-3,29 as well as clinical remission after treatment with immunosuppressive and immunomodulatory drugs.

The skin lesions in cats with PNOE consist of vegetative/verrucous/proliferative plaques that are friable and when removed revealed erosion or ulceration beneath; these plaques tend to be light brown to tan (FIGURE 4) but can also be dark brownish to black. 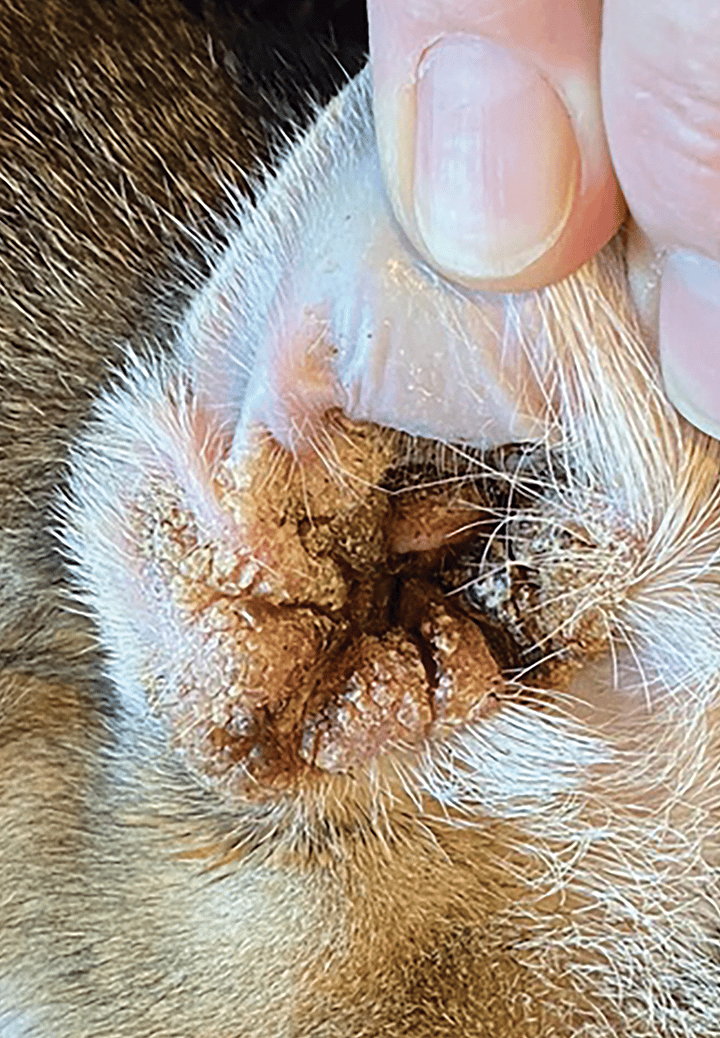 Figure 4. Vegetative and proliferative plaques on the concave surface of the pinna. Courtesy Dr. Matthew McCormick

Of 13 affected cats, 9 (69%) had only auricular lesions,22,23,25,26,28,29 3 had auricular and extra-auricular lesions,27 and the remaining cat did not have auricular involvement.24 In all but 4 cats, the lesions involved the proximal aspect of both concave pinnae; the convex surfaces of the pinnae were not affected.22-24 Of 13 cats, 12 (92%) had lesions in both ear canals,22,23,25-29 and in 8 (67%) of these cats, the openings of the vertical canals were occluded and otoscopic evaluation was not possible (FIGURE 5).25-29 Horizontal canals were involved in 2 cats,22,25 and in 1 of these cats, proliferative tissue caused the rupture of the right tympanic membrane and protruded into the right tympanic bulla.22 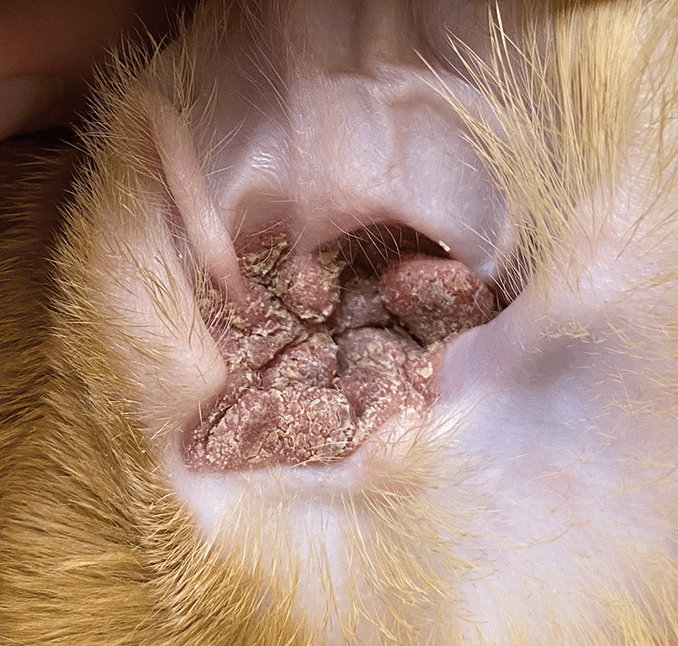 Figure 5. Severe proliferative tissue at the proximal aspect of the concave pinna and surrounding the opening of the vertical canal, leading to complete occlusion. Courtesy Dr. Andrew Simpson. 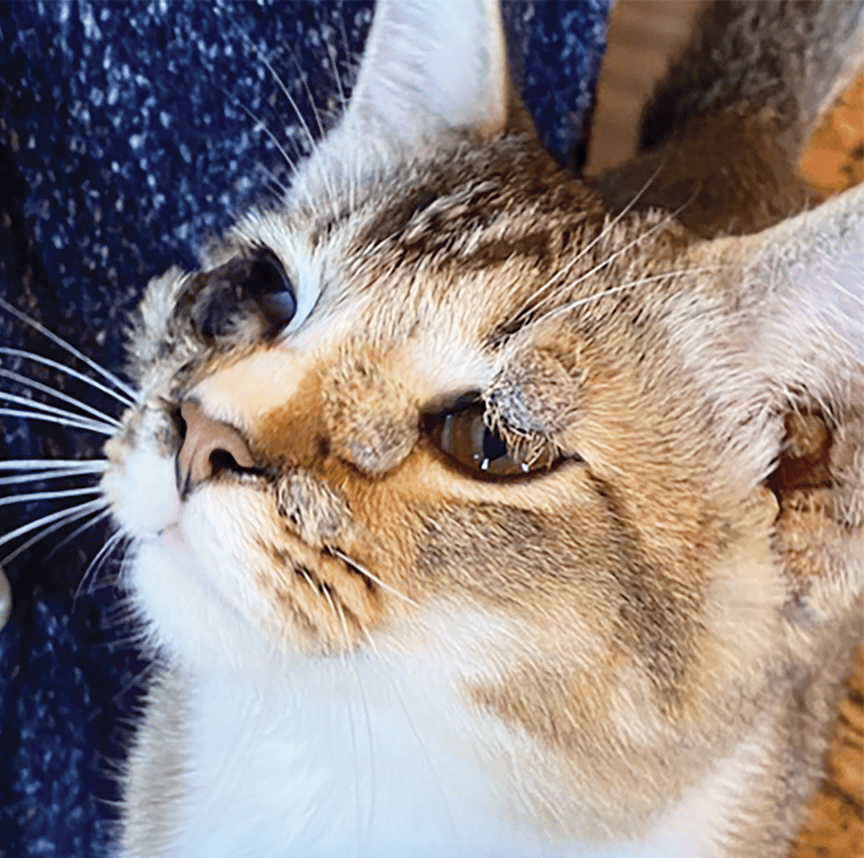 Figure 6. Extra-auricular lesions on the face of a cat with proliferative and necrotizing otitis externa. Courtesy Dr. Matthew McCormick. 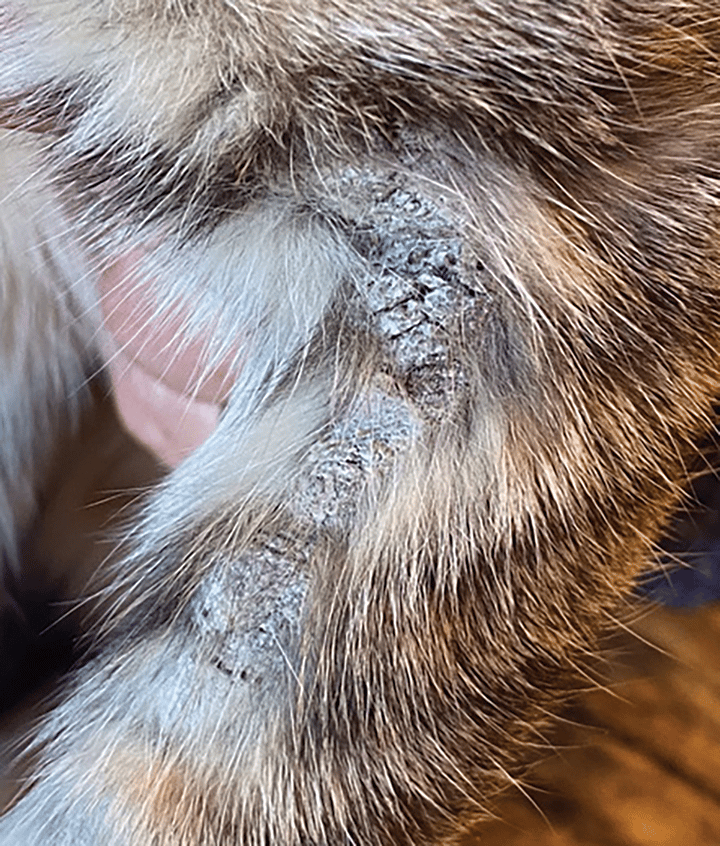 Figure 7. Vegetative plaques along the forelimb of a cat with extra-auricular proliferative and necrotizing otitis externa. Courtesy Dr. Matthew McCormick.

Definitive diagnosis of feline PNOE is achieved via skin biopsy in combination with the compatible skin lesions. Histopathologic features of PNOE consist of marked epidermal and follicular parakeratotic hyperkeratosis with shrunken and hypereosinophilic keratinocytes and pyknotic nuclei (apoptotic keratinocytes) at multiple levels in the epidermis and/or follicular outer root sheath. Lymphocytic satellitosis has been reported for only 4 cats.27,29

Spontaneous remission of PNOE has been reported for 2 cats, and complete remission has been achieved for 8 cats that received treatment.22,23,26,27,29 Time to clinical remission ranges from 3 weeks29 to 12 months.23 Treatments that lead to clinical remission include topical tacrolimus (as monotherapy22,23,29 or in combination with oral glucocorticoids23) or cyclosporine.27 Other effective treatments include oral glucocorticoids, either as monotherapy25 or with interferon-α and a novel protein diet.23 Skin lesions resolved for 1 cat that received 1 intralesional injection of methylprednisolone acetate followed by application of 0.05% clobetasol cream.26

AC refers to inflammation of the cartilage of the pinna. This condition is also referred to as relapsing polychondritis because in humans it affects multiple organs (i.e., auricular and nasal cartilage, eyes, heart valves) and often relapses.30

The pathogenesis of AC is unknown, but in humans it is considered an immune-mediated skin condition.30 AC is rare in cats and, to the author’s knowledge, only 10 reports of AC in cats have been published in veterinary journals31-39 or abstracts.40 Clinical information is available for only 18 cats, including 7 cats reported in a thesis cited by Gerber et al.35 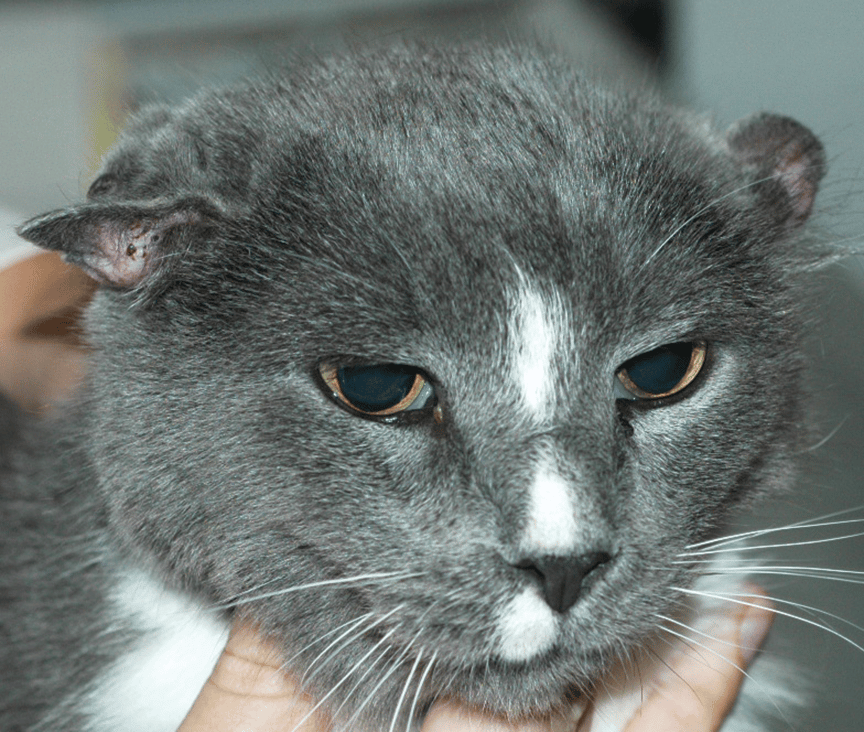 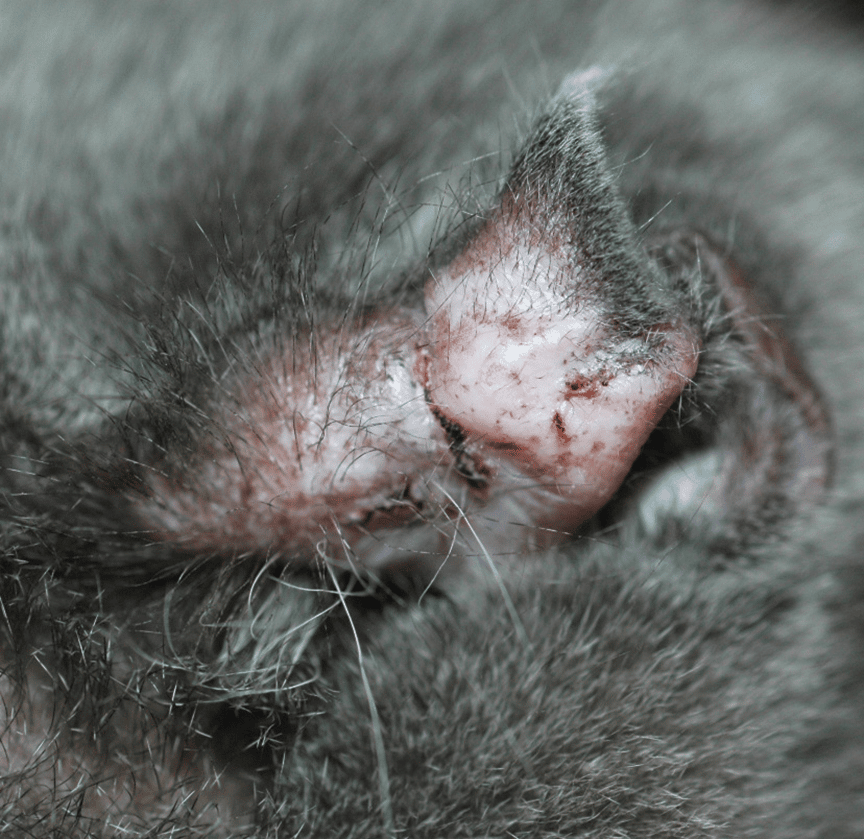 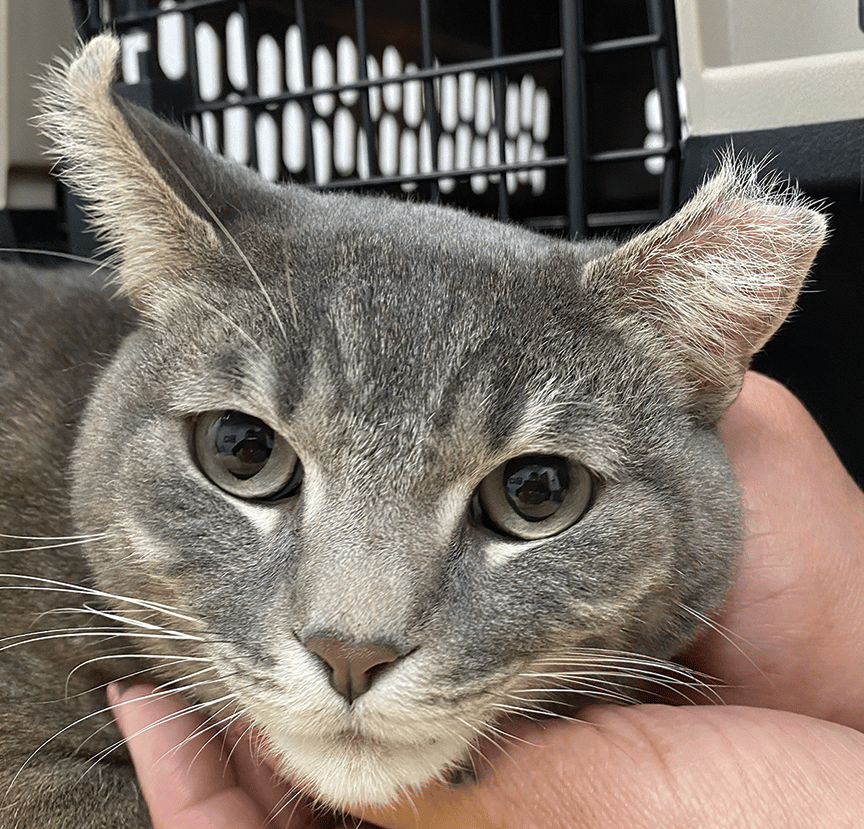 Differential diagnoses for cats presented for similar pinnal lesions include aural hematoma (for swelling of the pinna and/or deformity caused by fibrosis), contact dermatitis (for erythematous pinnae), and iatrogenic hypercortisolism (for curling of the pinna). Therefore, definitive diagnosis requires biopsy of the lesion on the pinna, which necessitates full-thickness biopsy of the pinna to include the cartilage. Histopathologic features of feline AC include lymphoplasmacytic inflammation, loss of cartilage basophilia, and cartilage necrosis.41

PCP, PNOE, and AC are immune-mediated dermatoses in cats that, for the most part, affect very specific anatomic locations. These 3 dermatoses can be diagnosed via biopsy of lesional areas; for AC, a full-thickness biopsy including the cartilage is required. Of these 3 dermatoses, the better prognosis is for PCP as treatment with doxycycline or oral cyclosporine often results in clinical remission. Although spontaneous remission has been reported for cats with PNOE, most cats require treatment; the most favorable outcome is associated with treatment with topical tacrolimus in combination with oral cyclosporine or a glucocorticoid. The rarity of feline AC, which often leads to pinnal swelling, deformity, and pain, makes assessment of treatment effectiveness challenging, but a few case reports indicate that systemic glucocorticoids and dapsone are reasonable treatments.