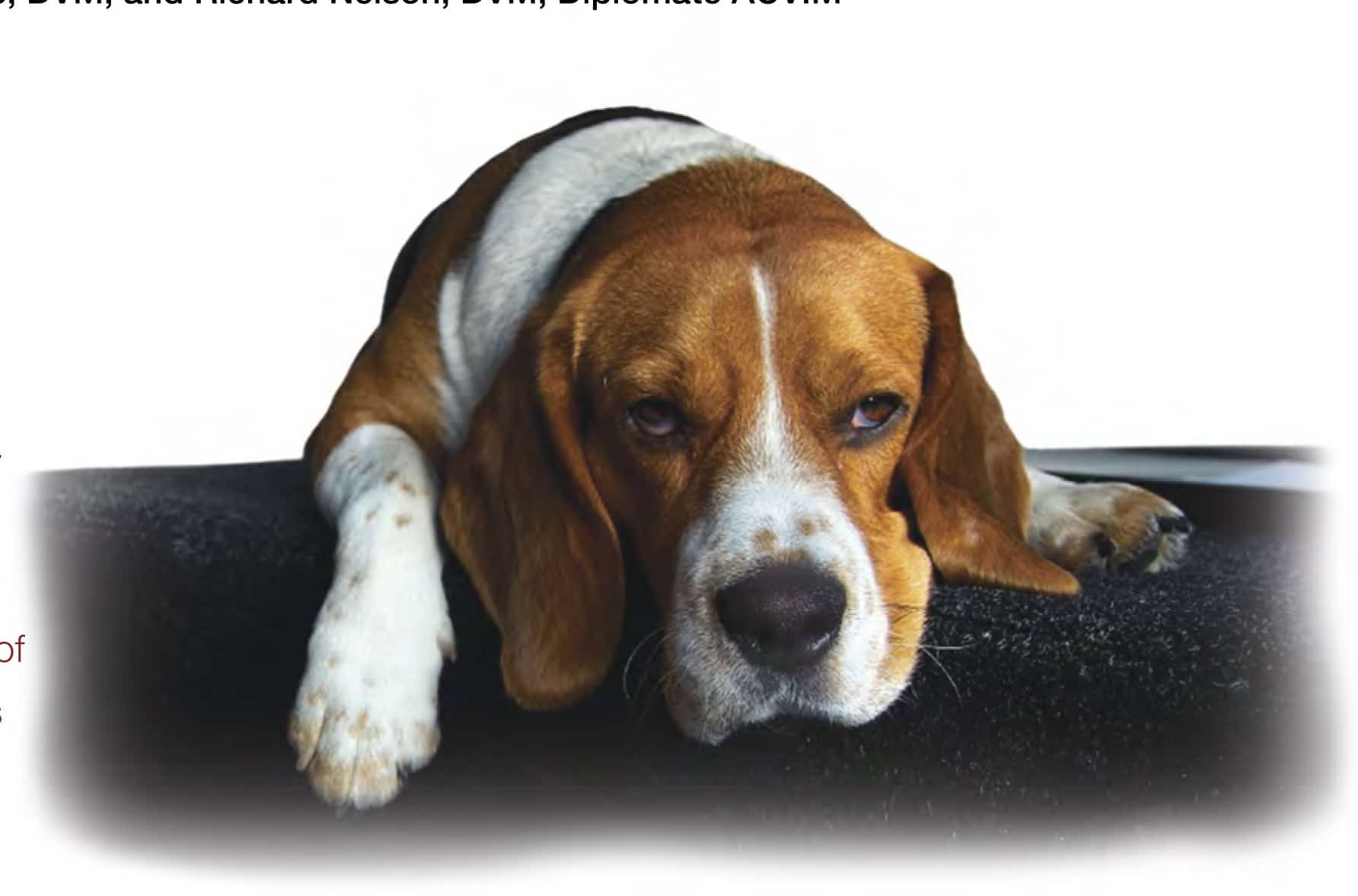 Blue, a 10-year-old spayed female beagle, presented to the University of California William Prichard Veterinary Teaching Hospital to be evaluated for a 4-month history of episodic weakness and collapse.

No change in water consumption, appetite, urination, or defecation had been noted. Blue’s food consisted of a senior dry kibble fed twice daily along with several treats per day; she had not had any incidences of vomiting or diarrhea. Blue was not currently receiving any medications.

Blue was obese with a body condition score of 8 out of 9. Vitals were within normal limits. There were no murmurs or arrhythmias, masses or organomegaly, or muscle atrophy. Peripheral lymph nodes were < 1 cm.

Based on history, signalment, and physical examination (including body condition), the primary differential diagnoses for hypoglycemia and episodic weakness (Table 2) in this dog included:

Thoracic radiographs were taken to determine if metastatic lesions were present; there were no significant abnormalities.

Abdominal ultrasound revealed a markedly enlarged (1.5 cm) mesenteric lymph node in the right cranial abdomen near the caudal vena cava, which was consistent with a metastatic lesion, and a 0.5-cm hypoechoic nodule in the liver, which could represent metastatic disease or benign change. No definitive pancreatic nodules were identified (Figure 1).

Computed tomography (CT) was not performed. 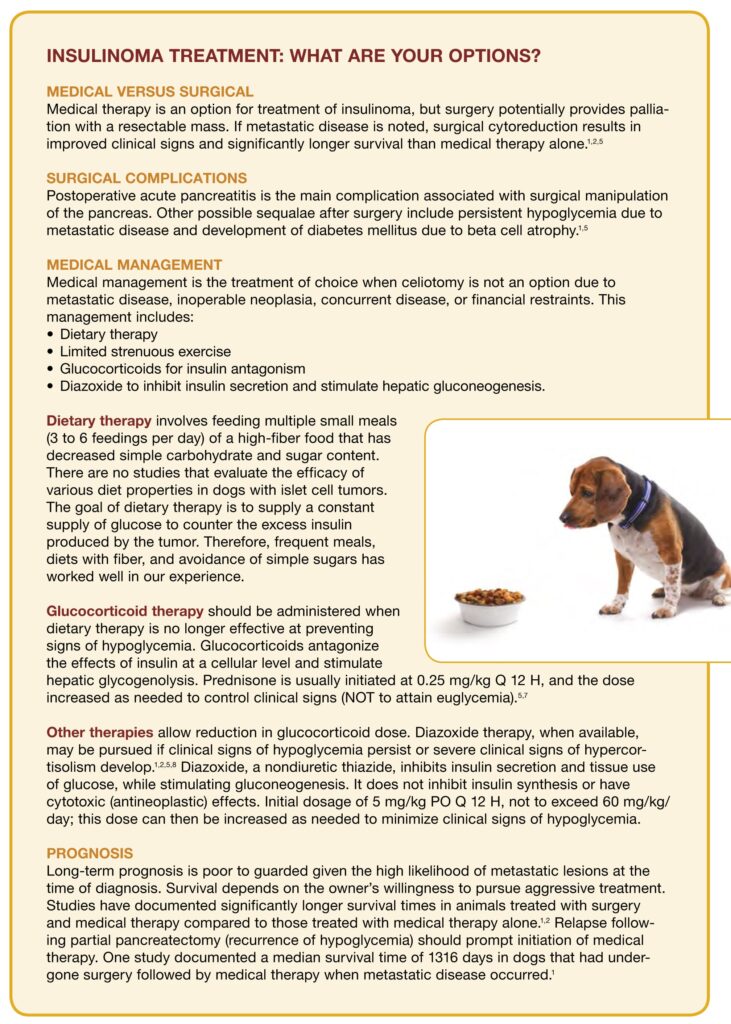 Neoplastic cells in both the pancreas and mesenteric lymph node were strongly immunoreactive to antibodies against insulin, confirming insulin-secreting beta-cell carcinoma (Figure 6). No evidence of neoplasia was noted in the right limb of the pancreas or the hepatic biopsy.

Blue recovered from anesthesia without complications. Blood glucose measurements stabilized at 70 to 100 mg/dL while in the hospital post operatively. No specific medical therapy was started postoperatively except for routine postoperative care, including IV fluids, pain medication, antiemetics, and small frequent meals of a low-fat diet.

Blue was discharged 4 days after surgery. She was initially fed a low-fat food (to reduce risk of pancreatitis post operatively) three times a day until the 1-month recheck. A follow-up was recommended in 10 to 14 days for suture removal and to recheck her blood glucose.

At the 14-day recheck, Blue’s incision had healed nicely and blood glucose measurements were 66 and 71 mg/dL.

At the 1-month recheck, Blue’s blood glucose, which was measured at home, ranged from 50 to 80 mg/dL, with occasional signs compatible with hypoglycemia. The owners noted that Blue had improved significantly since surgery, but recurrence of clinical signs with concurrent low blood glucose measurements confirmed metastatic disease containing functional islet cells that were probably producing insulin.

Blue’s food was switched to a diet with a moderate fat content, a mix of insoluble and soluble fiber, and limited simple sugars; she was fed 4 times a day.

Blue was last evaluated 21 months following surgery. She had measured blood glucose concentrations of 50 to 80 mg/dL and was being maintained on prednisone (2.5 mg PO Q 12 H), with minimal hypoglycemic complications.

Ann Della Maggiore, DVM, is currently finishing her small animal internal medicine residency at University of California – Davis School of Veterinary Medicine. She received her DVM from UC – Davis and completed an internship at Veterinary Medical and Surgical Group in Ventura, California.

Richard Nelson, DVM, Diplomate ACVIM, is a professor in the Department of Medicine and Epidemiology at University of California – Davis School of Veterinary Medicine. His teaching is focused on small animal endocrinology. Dr. Nelson received his DVM from University of Minnesota and completed a small animal internal medicine residency at UC – Davis.