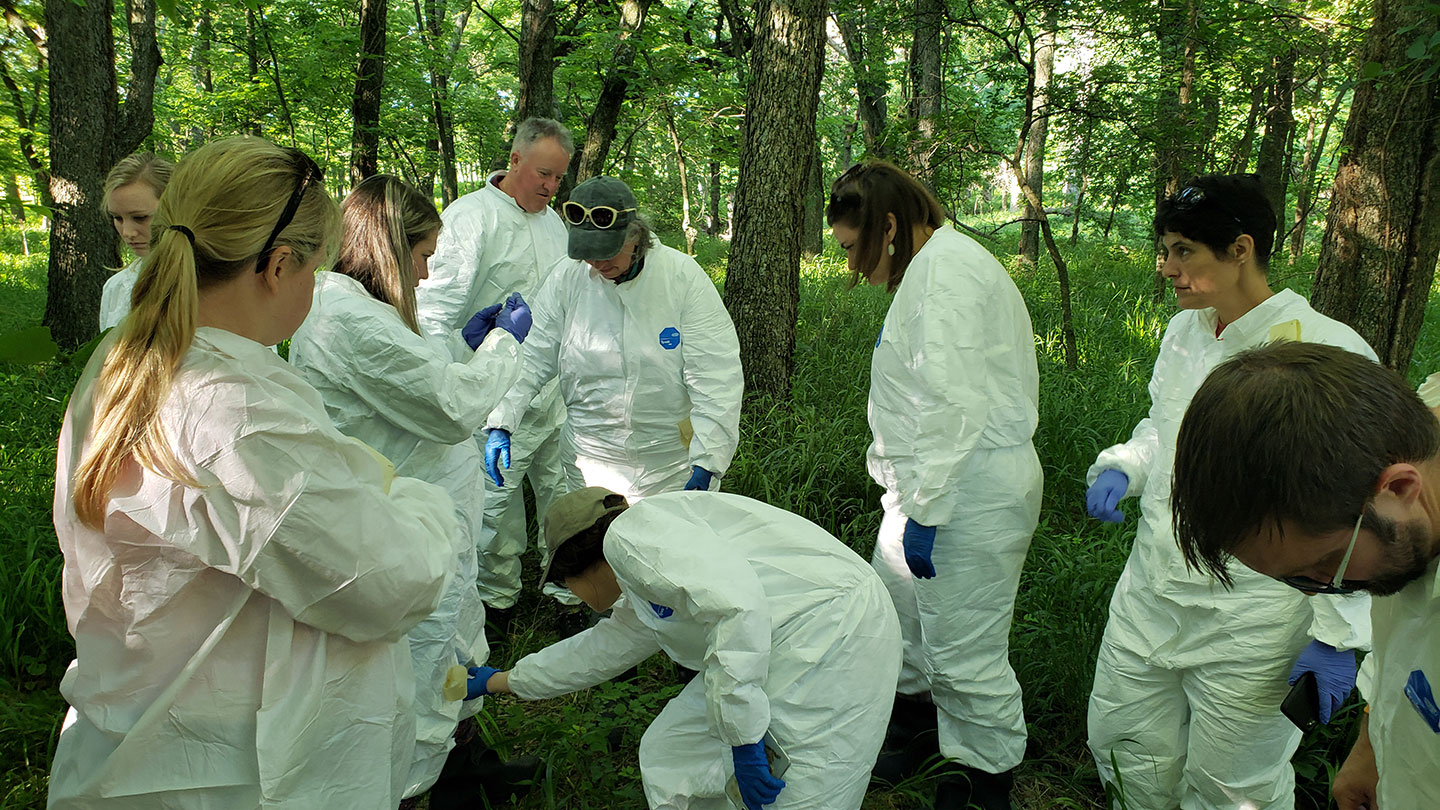 Dressed for success — the author (center) with several other veterinary media journalists, including Ken Niedziela, editor of our sister magazine Today’s Veterinary Business. We were collecting ticks to aid in research being conducted by K-State veterinary researchers, but we also stopped multiple times to conduct a “tick check” on one another’s tick hazmat suits. Photo: Courtesy Kansas State University College of Veterinary Medicine
more

“A lot of the myths surrounding ticks are because people don’t know about them,” says Brian Herrin, DVM, PhD, an assistant professor at Kansas State University College of Veterinary Medicine.

“Unlike mosquitos, fleas and other bugs that we know a lot more about, there is a lot people don’t know about,” chimes in Dr. Kathryn Reif, MSPH, PhD, assistant professor, K-State CVM. “Ticks pose a risk because other than Lyme disease, there are no vaccines to prevent tick-borne diseases.”

I am among the veterinary journalists who have gathered in Manhattan, Kansas, to attend K-State’s Tick Camp, a veterinary media event sponsored by Boehringer Ingelheim. We spend the first day getting educated about ticks by Dr. Reif, including tips on how to differentiate between sex and species. On the morning of the second day, we head to the Konza Prairie, a beautiful tallgrass prairie that’s owned by The Nature Conservancy and Kansas State University, to see ticks in action, including their “questing strategy,” which is how ticks detect their hosts (and next blood meal). During the afternoon, Dr. Herrin leads a discussion on tick-borne diseases.

“There are about 900 species of ticks in the world, with a dozen species found in the U.S.,” Dr. Reif says. “And while you may not need tick control 365 days per year, you do need tick control 12 months per year because they are around whenever the temp is around 35 degrees or warmer, just waiting for things to get better to come out.”

“And they affect everything,” adds Dr. Herrin. “Humans, companion animals and livestock animals.”

During Tick Camp, we discussed some of the myths associated with ticks, including the following:

Myth No. 1: Ticks are insects.
Ticks are actually arachnids, which means they’re more closely related to spiders than they are to flies or mosquitos. “It’s really easy to overlook ticks,” says Dr. Reif, “but it’s important to understand what your family is at risk for — we need to stress the idea of whole family health.”

Myth No. 2: Ticks survive only during warm, summer months.
Think again. “Ticks in the Arctic can live 7 to 8 years,” says Dr. Reif. “They are cold hardy. Understanding local tick species seasonality is critical to effectively target intervention strategies and understand risk of disease transmission.” Ticks are capable of biting at all three of their active life stages: larval, nymph and adult.

Myth No. 3: You only have to worry about ticks when you’re in certain parts of the country.
This is fake news. “One of the challenges is the changing expansion of tick ranges,” says Dr. Herrin. “And with the exception of the brown dog tick, our ability to manage tick reproduction is limited if not almost nonexistent.”

Adds Dr. Reif: “In places where ticks have normally been, their numbers are ramping up.”

Myth No. 4: Ticks are easy to spot.
Unfortunately, most people don’t spot a tick on their pet until it’s taken its blood meal. Most ticks are actually only about about 3 to 5 millimeters long. That’s about the size of a small seed (nymphs are about the size of a sesame seed; unfed adults are the size of a an apple seed).  “The adults are the ones we most commonly encounter,” says Dr. Reif. “A tick requires a blood meal to advance through its life. They feed about 3 times in their life; in each life stage they feed on something a little bigger.” Ticks can be grayish-white, brown, black, reddish-brown or yellowish in color.

Myth No. 5: Ticks fall onto their hosts from trees.
“Ticks do not jump, fall or fly onto hosts,” says Dr. Reif. “Ticks need to make physical contact with their hosts to get on the host.” They use what’s known as a “questing strategy,” explains Dr. Reif. “They seek hosts in open spaces of forest, brushland and grassland habitats. They are ambush predators that hope that something walks by. Ticks extend their first pair of legs to detect host cues.

“Ticks don’t travel far from where they detached from their last host,” explains Dr. Reif. “Deer nests are good places to go tick hunting because they are pretty much location bound.”

What increases the risk of a tick attaching itself to you or an animal? “Being outside in wooded areas, walking in areas where deer live and poor golf skills,” jokes Dr. Herrin. 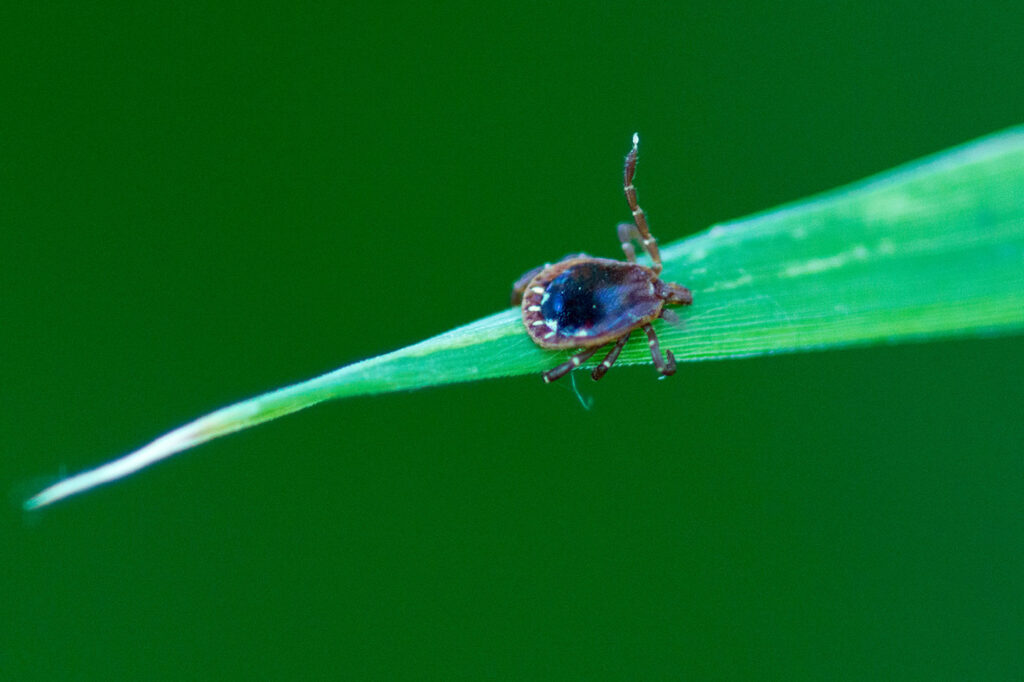 A tick using questing strategy in the Konza Prairie, where we headed for a field trip during K-State’s 2-day Tick Camp. Konza is a native tallgrass prairie in the Flint Hills of northeastern Kansas and serves as a field station for a number of K-State researchers. Photo: Courtesy Kansas State University College of Veterinary Medicine

Myth No. 6: It’s easiest to use a lit match to remove a tick.
First, ticks do not have a head. “They only have a gigantic mouth or capitulum,” says Dr. Reif. They extract blood by cutting a hole in the hosts skin and then insert their hypostome — “it’s like a fishing hook from hell.” And then, says Dr. Reif, “the ticks use brute force to suck up blood like you would from a giant straw.” Don’t use a lit match or petroleum jelly. Instead, use a pair of tweezers with really pointy ends.

Myth No. 7: We can eradicate ticks.
That’s a big nope, but as Drs. Herrin and Reif stress, we can manage their populations and shed light on how tick-borne diseases are transmitted and treated. “With the exception of brown dog tick, our ability to manage tick reproduction is limited if not almost nonexistent,” says Dr. Herrin. “Client education [by veterinarians] is critical.”

Ticks are not going away any time soon, says Dr. Reif — “they’ve probably been around a couple of million years.”

You can read more about K-State’s work with vector-borne illnesses here.

Read: Beyond Borders — The Truth About Ticks