Justine A. Lee, DVM, Diplomate ACVECC & ABT, is the CEO and founder of VETgirl (vetgirlontherun.com), a subscription-based podcast and webinar service that offers RACE-approved online veterinary continuing education. She recently received the NAVC Speaker of the Year Award (2011, 2015, 2016) and is the author and editor of several veterinary textbooks, book chapters, and scientific publications. She completed her veterinary training at Cornell University, Angell Animal Medical Center (Boston), and University of Pennsylvania.

Dr. Cohn is a Professor of Veterinary Medicine and Surgery at the University of Missouri College of Veterinary Medicine. Her clinical and research interests include respiratory and infectious diseases of dogs and cats. She has a special interest in vector-borne diseases, and a long-standing goal is to help prevent or improve the clinical outcome of cats afflicted with cytauxzoonosis. She is the co–editor-in-chief of the textbook Côté’s Clinical Veterinary Advisor, 4th edition. 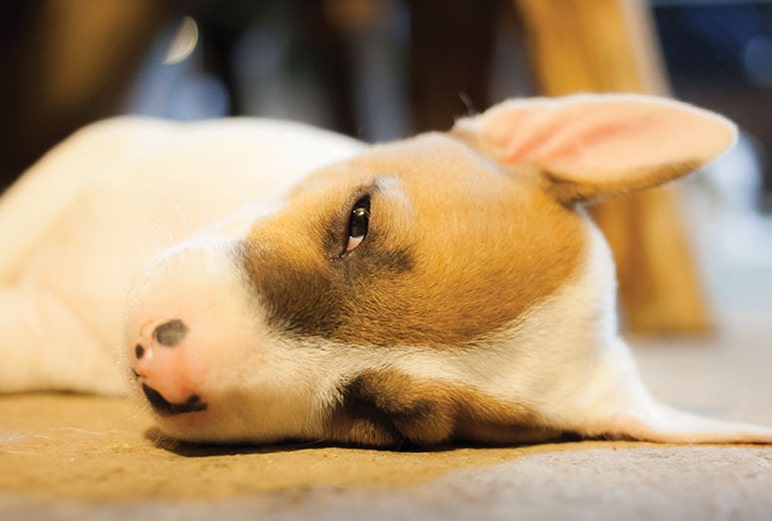 JP, a 6-week-old, 3.5-kg intact male pit bull mix, presented for anorexia, vomiting, and bloody diarrhea. He had been acquired from a flea market and seemed healthy but thin.

The day after the owners acquired JP, the puppy began vomiting and, the following day, he had diarrhea. On day 4, JP was presented to the primary care veterinarian, who evaluated him for progressive listlessness, anorexia, continued vomiting, and bloody diarrhea.

The owners stated that JP had 2 littermates at the flea market that were not as playful as JP. They also confirmed the puppies had not received any vaccinations.

SNAP Parvo Test (idexx.com) results were positive, and JP was referred to another facility that had an isolation unit and provided 24-hour care.

The physical examination findings of JP upon presentation to the referral facility are listed in Table 1.

JP also had bloody diarrhea staining his ventral abdomen and hindlimbs. He vomited just after palpation. While JP was able to stand with support, he was extremely weak. 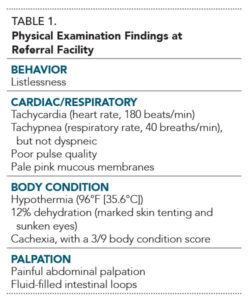 Depending on available resources and the financial limitations of the owners, diagnostics can follow 3 tiers of diagnostic evaluation (see Levels of Diagnostic Evaluation).

* If result is negative but parvovirus is still suspected, perform polymerase chain reaction on feces. 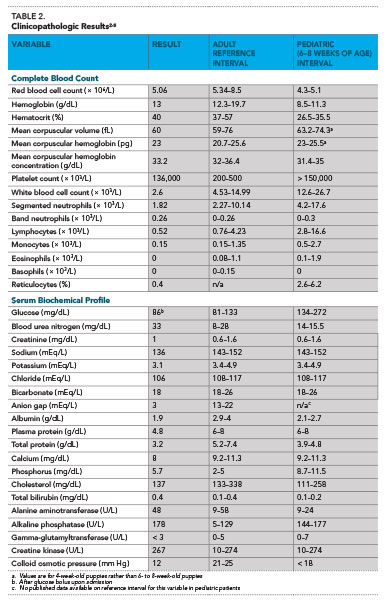 The presence of hypovolemic shock and sepsis—caused by dehydration, leukopenia, and intestinal bacterial translocation—is the most life-threatening condition present in JP. Associated hypoglycemia, hypoalbuminemia, and electrolyte or acid–base disturbances must be addressed.

Should Oxygen Be Given During Initial Resuscitation? While JP was tachypneic—likely secondary to hypovolemia—he was not dyspneic and his lung sounds were clear. Therefore, supplemental oxygen was probably not necessary but could have been provided until normoxemia was confirmed. However, for a neonate (< 2 weeks of age), oxygen therapy would be recommended.

BG was measured every 6 H, with glucose supplementation adjusted as necessary to maintain normoglycemia. 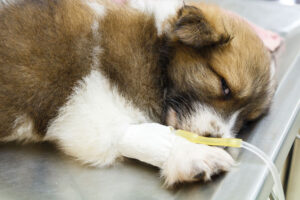 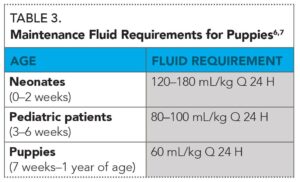 During the remaining period of hospitalization, and after the dehydration deficit had been replaced, fluid rate was decreased to reflect only maintenance needs and ongoing losses.

Due to sepsis secondary to leukopenia, antibiotic therapy was initiated (IV initially; then PO once vomiting abated). A potent antiemetic was initiated to treat nausea and minimize risk for aspiration pneumonia.

The supportive medications and nutrition JP received are outlined in Table 4; daily in-hospital monitoring for parvovirus patients is described in Table 5. 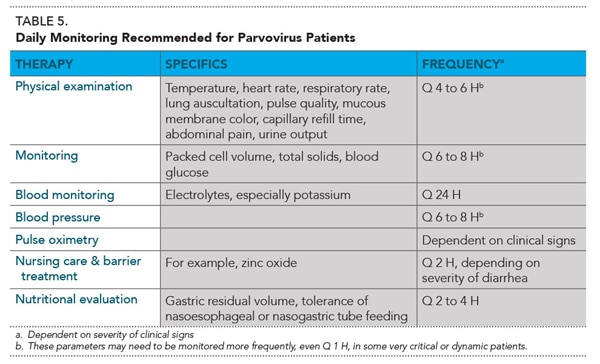 Other Therapeutic Options: Worth It?

In the past, fresh or fresh frozen plasma from recovered dogs had been suggested to provide antiparvoviral antibodies. Recent studies, however, have demonstrated no beneficial effect of this method and shown that even recently recovered animals have minimal anti-canine parvovirus antibody concentrations.8,9 Moreover, such treatment may prime the dog for future transfusion reactions later in life.

Equine endotoxin antiserum, recombinant human granulocyte-stimulating factor, and antiviral agents (eg, oseltamivir) have not been shown to improve survival or outcome.10-12 In small studies, use of feline interferon has been weakly associated with improved survival; however, this agent is not readily available in veterinary hospitals in the U.S.13,14

JP’s vital parameters improved markedly over the first few hours of therapy. By the following day, he subjectively looked less nauseated and had less abdominal pain. A temporary nasogastric feeding tube was placed at that time for nutritional support, with sporadic gastric suctioning to measure residual gastric volume. By day 4, JP was ingesting small amounts of meat-based baby food, and the nasogastric tube was removed. JP was dewormed with fenbendazole and discharged later that day.

JP was discharged on day 4, and the owner was taught how to administer medications and encourage JP to eat. The primary care veterinarian performed a recheck examination 3 days later, and reported that JP was acting and eating normally at that time.

The prognosis for canine parvovirus infection is fair to good. Perhaps surprisingly, severity of neutropenia is not a negative prognostic factor; rather, severity of dehydration and lymphopenia may be instead.15 Recently, several studies have evaluated other measures that may affect prognosis.16-18

A study from Colorado State University compared standard in-hospital treatment versus a modified outpatient treatment (using volume resuscitation followed by SC fluid therapy and supportive care), with recent survival rates of 80% to 90% reported with treatment.19 Both protocols can be successful, with a slightly lower survival rate in outpatients.19

Hospitalization with intensive therapy was initially indicated for JP due to his severe hypoglycemia, dehydration, and shock, but a modified outpatient protocol (SC fluids, antiemetics, antibiotics) may be a good alternative for less severely affected patients or clients with financial limitations.

In critically ill neonate and pediatric patients, goals of treatment should be prioritized by the four H’s:

Canine parvovirus (CPV) is a common and severe pathogen that affects young dogs that are unvaccinated, under-vaccinated, or immunosuppressed. The virus first emerged in dogs in the mid 1970s and has since mutated into 3 different forms: CPV-2a, CPV-2b, and, most recently, CPV-2c.

All 3 forms of CPV are environmentally stable, nonenveloped viruses transmitted via the fecal–oral route.

Without treatment, CPV can be life threatening due to sepsis, severe fluid losses and electrolyte derangements secondary to anorexia, vomiting, and diarrhea. In order to ensure the best outcome, treatment should be aimed toward symptomatic supportive care, aggressive fluid therapy, antiemetics, antibiotic therapy, and nutritional support.

Although there are differences between young and adult animals, pediatric patients can still be treated aggressively and respond well to therapy. However, clinicians must be aware of their normal physiologic and hemodynamic measures. The small size of these patients should not limit our ability to appropriately treat them.