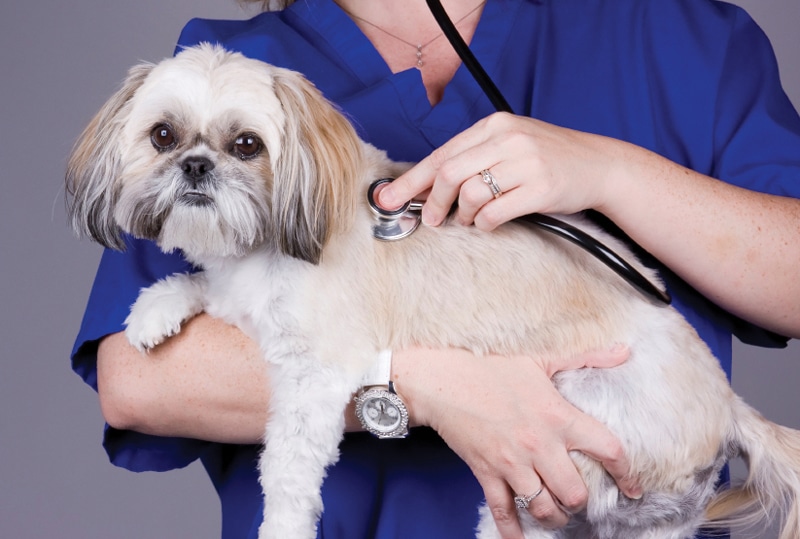 Clinical signs for both forms of the disease primarily result from excessive circulating cortisol and include polyuria, polydipsia, polyphagia, and endocrine alopecia (Table 1). 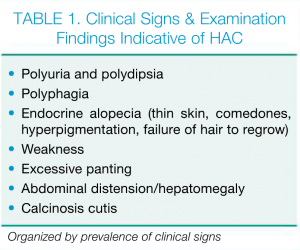 Diagnosis of HAC is preceded by initial clinical suspicion for the disease after reviewing history and physical examination findings. Abnormalities identified on a complete blood count, serum biochemistry panel, and urinalysis provide additional support for HAC (Table 2). To establish a diagnosis of HAC, excess circulating cortisol must be documented by a urine cortisol:creatinine ratio (UCCR) and lack of appropriate negative feedback after glucocorticoid administration (low-dose dexamethasone suppression [LDDS] test).

DIFFERENTIATION OF PDH FROM ATH

Once the diagnosis of HAC has been established, the following tests can be used to differentiate PDH from ATH (Table 3); sometimes more than 1 test is necessary.

Suspicion for and diagnosis of HAC is relatively straightforward when all aspects of the evaluation are consistent with the disease. Unfortunately, discordant information is common and can create uncertainty about diagnosis (see HAC Diagnostic Algorithm).

Problems with establishing a diagnosis of HAC usually result from one of several possibilities (Table 4). In our experience, the most common problems result from a combination of: 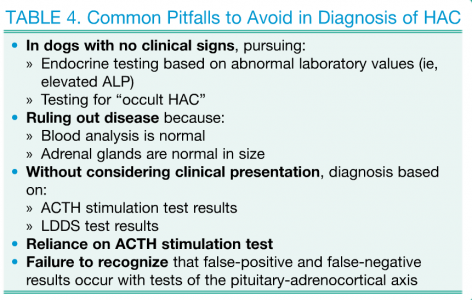 A 9-year-old, castrated male Shih Tzu was referred to the University of California–Davis Veterinary Medical Teaching Hospital for further evaluation of cystic calculi.

The dog had a history of persistent increased serum alkaline phosphatase (ALP) activity during the past year (526–1530 IU/L). The owner stated that, during the past 6 months, the dog seemed to have increased panting and appeared to be drinking “a lot of water.”

Results of a physical examination were unremarkable; the hair coat and skin thickness were normal and hepatomegaly was not identified.

Pertinent results from diagnostic tests are listed in Table 5.

The case was then transferred to the Internal Medicine Service for evaluation and treatment recommendations for HAC. 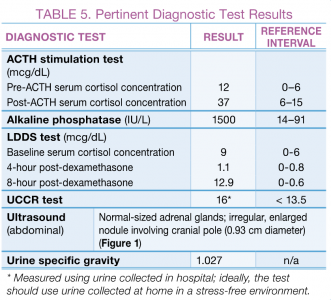 This case demonstrates a dog with:

Evidence against HAC in this dog includes lack of supportive clinical signs and physical examination findings. Evidence for HAC includes endocrine test results used to establish the diagnosis of HAC. We are left with the questions:

All information should be critically examined whenever conflict exists in the diagnostic evaluation for canine HAC.

Increased serum ALP activity is not pathognomonic for HAC and, by itself, should NOT be used as an indicator to pursue diagnosis of HAC. Increased ALP activity can be seen with a variety of other conditions, most notably hepatobiliary disease.

The UCCR was only slightly increased and measured using urine collected in the hospital.

The LDDS test is considered the best test for establishing a diagnosis of HAC, except in dogs with suspected iatrogenic HAC.

The ACTH stimulation test is the gold standard for diagnosis of hypoadrenocorticism and iatrogenic HAC, and for monitoring trilostane and mitotane treatment. In our experience, this test has not been reliable for establishing a diagnosis of spontaneous HAC. 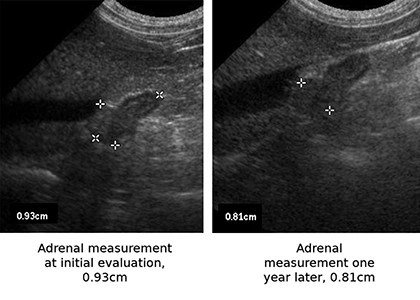 The decision was made not to initiate treatment for HAC for this patient due to the:

The dog was sent home, and recheck abdominal ultrasound was recommended in 1 to 2 months to assess if there were changes in the size of the adrenal “nodule.” In addition, the owner was instructed to determine 24-hour water intake beginning a week after discharge. Water consumption was calculated to be approximately 65 mL/kg/24 H (normal, < 90 mL/kg/24 H4); this finding did not support a diagnosis of HAC. 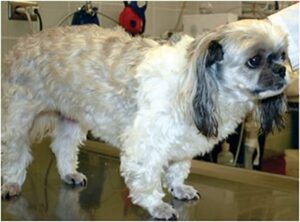 Figure 2. Picture of Ben at his 1-year recheck; no clinical signs of HAC were evident at this time.

At the 6-week recheck, the dog’s hair—where shaved for the abdominal ultrasound—had regrown, physical examination was unremarkable, and urine specific gravity on a free-catch urine sample was 1.034. The owner reported no clinical signs consistent with HAC.

The dog was followed for more than a year; adrenal measurement remained unchanged (Figure 1), and no clinical signs of HAC developed (Figure 2). Repeat hormonal testing was not done.

Many clients notice subtle changes in their dogs’ health, and often seek veterinary care quickly. As a consequence, veterinarians often test for HAC early in the development of the disease, when, compared to testing performed in dogs with advanced disease:5

Diagnosis of HAC is appropriate when the following all support the diagnosis:

Diagnosis of HAC is NOT as evident when the information used to establish the diagnosis conflicts, most notably when clinical signs and physical examination findings are supportive of the diagnosis but endocrine test results are not, and vice versa.

Clinicians must be prepared to critically evaluate all diagnostic information gathered to determine if additional testing or re-evaluation is indicated, taking into consideration the common pitfalls that complicate the diagnosis of HAC. When endocrine tests do not support the suspected diagnosis of HAC based on clinical signs and physical examination findings, re-evaluation in 2 to 3 months is indicated.

Ann Della Maggiore, DVM, Diplomate ACVIM, is a staff internist at University of California–Davis School of Veterinary Medicine. She received her DVM from UCD, where she also completed a residency in small animal internal medicine.

Richard Nelson, DVM, Diplomate ACVIM, is a professor at University of California–Davis School of Veterinary Medicine. He received his DVM from University of Minnesota and completed a small animal internal medicine residency at UCD.