Addison's disease has an overall low disease prevalence, and when combined with vague clinical signs and nonspecific clinicopathologic abnormalities, diagnosis is challenging. 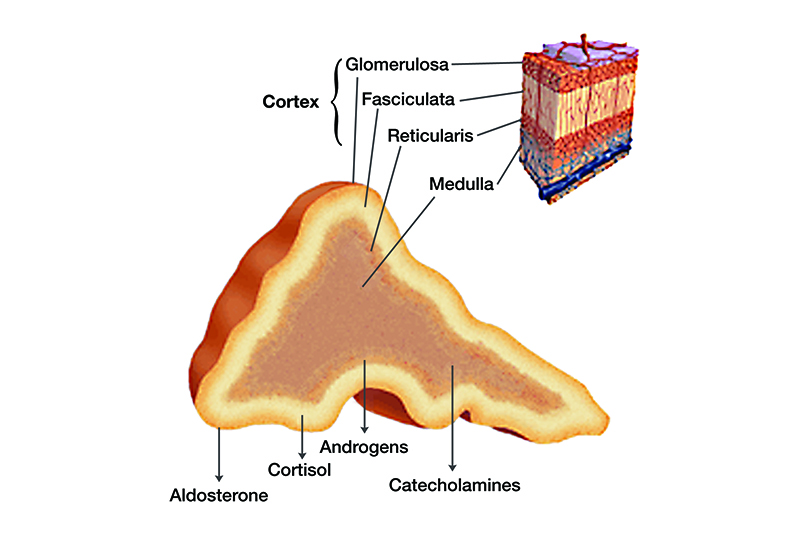 To read an updated article on canine hypoadrenocorticism, click here.

Early identification and treatment can result in an overall excellent long-term prognosis; therefore, it is essential that clinicians be familiar with the various forms and potential presentations of canine hypoadrenocorticism.

The adrenal cortex is composed of 3 distinct functional layers (Figure): 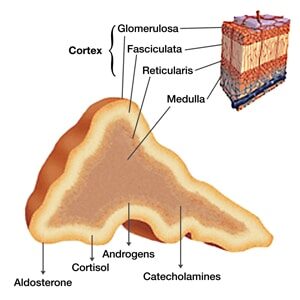 Figure. The adrenal gland is composed of an outer cortex and inner medulla. Each functional zone of the cortex is responsible for the synthesis of a specific hormone.

Glucocorticoids (cortisol) influence nearly every tissue in the body and are vital for metabolism, immunity, and stress counter—regulation.

Aldosterone is the primary mineralocorticoid that promotes sodium resorption and potassium excretion in the distal renal tubules.

Primary hypoadrenocorticism, the classic form of the disease, is characterized by a lack of glucocorticoids and mineralocorticoids.

Autoantibodies. Although the specific immunologic antigen is not yet known in dogs, the presence of 21-hydroxylase autoantibodies characterizes most human cases.3,4 Recently, autoantibodies for a P450 side-chain cleavage enzyme were more commonly identified in canine patients with hypoadrenocorticism as compared to control patients.5 However, further studies are required to elucidate the role of antibodies to this enzyme in the pathogenesis of hypoadrenocorticism.

In a small population of “atypical” dogs—approximately 5% to 10%—adrenal destruction is purported to spare the glomerulosa layer, resulting in an isolated glucocorticoid deficiency.6Most dogs with isolated glucocorticoid insufficiency do not progress to clinically significant mineralocorticoid deficiency,6,7 although a recent paper showed that these dogs may have low or undetectable levels of aldosterone despite apparently normal electrolyte concentrations.8

Secondary hypoadrenocorticism refers to a central (anterior pituitary) deficiency of ACTH, resulting in isolated glucocorticoid insufficiency. Mineralocorticoids are spared because ACTH does not directly influence their release.

Causes. This condition most commonly results from abrupt discontinuation of long-term exogenous administration of corticosteroids or progesterone analogs. Rarely, congenital defects of the pituitary gland, such as a cystic Rathke’s pouch, neoplasia, or trauma9 affecting the hypothalamus or pituitary gland, result in secondary hypoadrenocorticism.

Critical illness-related corticosteroid insufficiency (CIRCI) is also referred to as relative adrenal insufficiency and has been associated with severe illness, such as sepsis, septic shock, or trauma. The syndrome is typically transient, and adrenal function normalizes following correction of the underlying condition. Critically ill patients exhibiting refractory hypotension despite aggressive fluid therapy and the use of pressor agents should be evaluated for CIRCI.

Although dogs of any sex, age, or breed (including mixed breeds) can develop the disease, certain breeds are overrepresented (Table 1),10 and strong evidence suggests the disease is heritable in certain breeds.11-13 A study underway at North Carolina State University is attempting to identify genetic factors involved in Addison’s disease in standard poodles (ncstatevets.org/addisonsstudy).

The clinical presentation of hypoadrenocorticism can vary in severity (Table 2), with waxing and waning episodes of illness that classically worsen during times of stress. The Addisonian crisis is the life-threatening culmination of combined hormone deficiencies that can be fatal if not appropriately treated.

Based on the signs noted in Table 2, it is understandable that atypical hypoadrenocorticism is more challenging to diagnose because signs related to isolated glucocorticoid deficiency are more insidious.

GI Abnormalities. Anorexia, vomiting, and diarrhea are common. Anemia—from chronic disease or gastrointestinal (GI) bleeding—may be identified, although relative polycythemia may also result from dehydration. Depending on the degree of vomiting and diarrhea, hypoalbuminemia, hypoglobulinemia, or acidemia may be identified.

Na/K Ratio. When hyponatremia, hyperkalemia, or both are noted, mineralocorticoid insufficiency is identified. A sodium/potassium (Na/K) ratio < 27:1 is strongly suggestive for hypoadrenocorticism, and lower ratios are associated with higher specificity.14,15 However, low Na/K ratios as severe as < 20:1 can also occur with other disorders, such as acute kidney injury, diabetic hyperosmolar syndrome, gastroenteritis, and various causes of abdominal and thoracic effusions.

A recent study demonstrated that the combination of Na/K ratio with lymphocyte count is a better screening test for hypoadrenocorticism than either variable alone,15 but this also can be subject to misinterpretation.

Thoracic radiographs may reveal a small heart and caudal vena cava, which signifies hypovolemia;16 rarely, megaesophagus may be seen in association with hypoadrenocorticism.17

An electrocardiogram may reveal a bradyarrhythmia with absent P waves, tented T waves, prolonged QRS complexes, and decreased R wave amplitude, depending on the degree of hyperkalemia.

Cortisol is measured at baseline and then one hour following an IV or IM injection of synthetic ACTH (5 mcg/kg).20 Typical and atypical hypoadrenocorticism are defined by a pre- and postcortisol concentration of ≤ 2 mcg/dL.7

Currently, the diagnosis of CIRCI is controversial, and the following guidelines have all been used to evaluate adrenal function in critically ill patients21-23

If primary hypoadrenocorticism is highly suspected, then replacement of glucocorticoids and mineralocorticoids in the acute setting can help improve clinical signs and clinicopathologic abnormalities.

In the emergency setting, avoid:

Clinical signs of secondary hypoadrenocorticism in veterinary patients on long-term steroid therapy are uncommon. Rarely, some patients may experience GI signs secondary to glucocorticoid withdrawal following abrupt cessation of steroid therapy. To avoid signs of adrenal insufficiency, it is recommended to taper steroids to physiologic replacement doses over several weeks.

Glucocorticoid treatment of veterinary patients with CIRCI is controversial, and limited data is available to support use, dosage, or route of administration. In patients that meet the criteria of CIRCI and display refractory hypotension (despite aggressive medical management), we suggest the use of supplemental glucocorticoids at doses similar to those used in an Addisonian crisis (Table 4). Following resolution of critical illness, corticosteroid therapy may be tapered and discontinued depending on the patient’s clinical response. A repeat ACTH stimulation test can be performed 4 to 6 weeks following discontinuation of steroid therapy to document adrenal recovery.

Combined glucocorticoid and mineralocorticoid activity is provided by fludrocortisone acetate, a PO daily medication, which abolishes the requirement for a separate corticosteroid and can be substituted if DOCP is not available. However, compared with DOCP, disadvantages of fludrocortisone include increased cost (especially in larger dogs), more frequently recognized adverse effects (eg, polyuria/polydipsia), and less control of hyponatremia.27

A recent paper demonstrated that, in canine patients with hypoadrenocorticism, lower initial doses of DOCP are equally efficacious in controlling electrolytes and clinical signs compared with the recommended starting dose (Table 4).26

DOCP is relatively expensive, particularly in large breed dogs; thus, these findings have important financial implications for veterinarians and pet owners. If finances are of concern, after the first dose, it is reasonable to attempt incremental lowering of the subsequent DOCP doses by approximately 25%. Clients can also be taught to administer DOCP at home, which has potential cost savings.

When an attempt is made to reduce the dose or extend the interval between injections, more frequent monitoring of serum electrolytes is required, and clients should be informed that—in addition to the cost of DOCP—initial cost will increase accordingly.

All patients with primary hypoadrenocorticism require life-long medical therapy. Once patients are well regulated, evaluate them at least 2 times each year, with a physical examination and routine bloodwork. Although canine hypoadrenocorticism is serious and, sometimes, life-threatening, early identification and proper treatment can result in an excellent long-term prognosis in most patients.27

Maya Lottati, DVM, PhD, is a resident in internal medicine at VCA Veterinary Specialists of the Valley in Woodland Hills, California. She received her DVM from University of California—Davis and completed a small animal internship at VCA West Los Angeles Animal Hospital.