The prognosis for cats with uncontrolled acromegaly and poorly controlled diabetes mellitus is poor to guarded; however, in cats, when the concurrent disease causing insulin resistance is recognized and treated appropriately, a favorable outcome is possible.

Ann Della Maggiore, DVM, DACVIM, serves as an assistant professor of clinical internal medicine at the University of California, Davis School of Veterinary Medicine, with a specific interest in small animal endocrinology. She received her veterinary degree from UC Davis, then completed a residency in small animal internal medicine at the same institution. 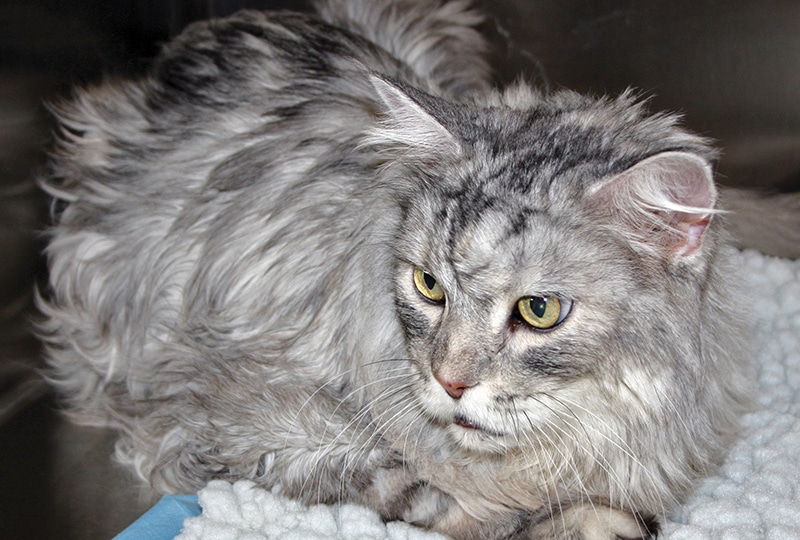 Sugar was diagnosed with diabetes mellitus 2 years prior to presentation. Initially, her diabetes was moderately controlled on 5 to 6 units of recombinant human protamine zinc insulin (PZI) (40 U/mL; ProZinc, bi-vetmedica.com), but over the year prior to presentation the insulin dose had been progressively increased with no improvement in glycemic control.

Upon presentation, Sugar was receiving 14 units of recombinant human PZI. The owner was performing blood glucose curves at home, but struggling to maintain Sugar’s blood glucose below 300 mg/dL.

In addition to diabetes mellitus, Sugar had concurrent hypertrophic cardiomyopathy and chronic rhinitis, and persistent polyuria, polydipsia, polyphagia, and weakness.

Physical examination revealed a symmetrically muscled cat, weighing 7.7 kg, with a body condition score of 6/9. Sugar had an unkempt hair coat, mild prognathia inferior, and a broad head (Figure 1), and walked with a plantigrade stance (Figure 2). No organomegaly was appreciated, and the cat appeared to have normal mentation. 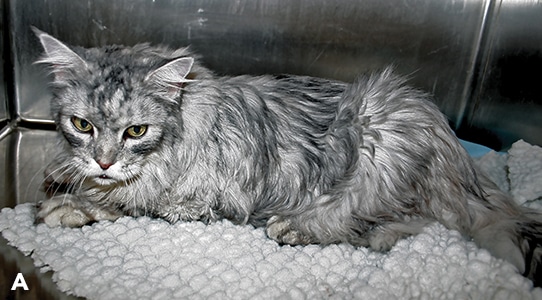 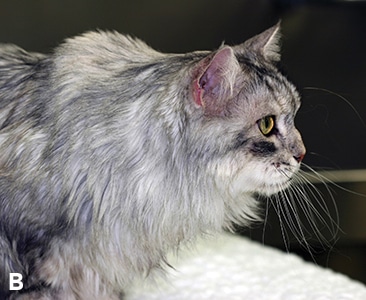 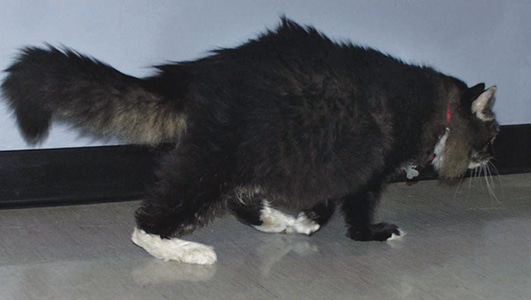 FIGURE 2. Cat demonstrating the classic plantigrade stance seen with diabetic neuropathy, which is a consequence of poor glycemic control.

Urinalysis was unremarkable except for glucosuria (> 1000 mg/dL; reference range, negative); urine culture revealed no growth. A blood glucose curve was performed that showed no response to insulin, and all blood glucose values were between 350 to 400 mg/dL.

When approaching these patients, carefully: 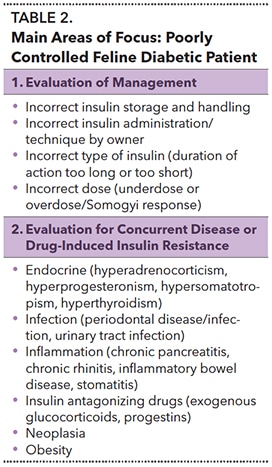 Make sure to take a thorough history and perform a complete physical examination, CBC, serum biochemical profile, fructosamine, urinalysis, and urine culture. In addition, also review insulin administration and handling with the owner.

Additional testing to consider, depending on the physical examination and initial diagnostic findings in each individual patient, includes: 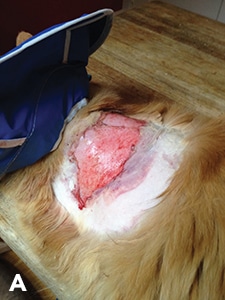 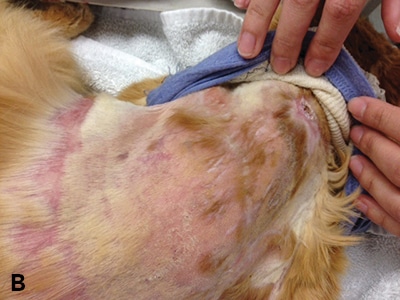 FIGURE 3. Feline skin lesions consistent with fragile skin syndrome due to pituitary dependent hyperadrenocorticism (A); same skin lesions after 2 months of therapy (B).

Acromegaly is an uncommon cause of insulin resistance in cats. In a poorly regulated diabetic cat, lack of a typical acromegalic appearance (prognathism, enlarged feet) does not negate the importance of testing for this condition by measuring serum levels of IGF-1 and performing advanced imaging of the brain.2

Acromegaly, also known as hypersomatotropism, is a disease characterized by excess GH, which stimulates increased production of IGF-1 in the liver and other tissues. GH and IGF-1 cause a variety of changes in the body, including organ enlargement and increased proliferation of bone that can be seen visually as jaw enlargement (prognathism) or large paws.2,4,5

Acromegaly and excess GH are typically caused by a pituitary adenoma. GH has anti-insulin effects, causing increased glucose production in the liver and reducing insulin sensitivity in the body by a variety of mechanisms. When insulin resistance and glucose production cause elevation of serum blood glucose, the animal becomes diabetic.

Prevalence of acromegaly in diabetic cats is unknown, but is suspected to be as high as 30% of difficult-to-regulate diabetic cats.4 It is typically seen in elderly male cats.

In practice, diagnosis of acromegaly is based on:

Additional biomarkers are being evaluated, but limited data are available. GH assays are not readily available—blood sampling has to be very specific to prevent degradation of the hormone, and the assay lacks sensitivity and specificity.

Pituitary-dependent hyperadrenocorticism can also cause severe insulin resistance and a pituitary mass—diagnostic results also seen in diabetic cats with acromegaly. However, clinical presentation of these diseases is often very different:

In Sugar’s case, acromegaly was considered a primary differential due to:

These findings confirmed a diagnosis of acromegaly—the cause of the severe insulin resistance and poorly controlled diabetes mellitus. 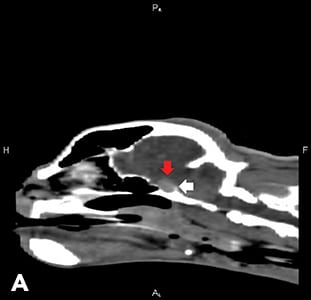 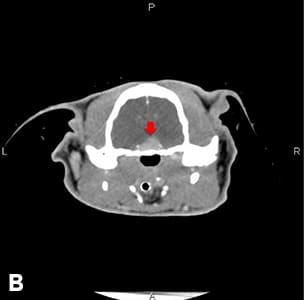 Ideal treatment for acromegaly has not yet been determined. Current treatment options include radiation therapy, surgery (hypophysectomy), or medical management.

Radiotherapy is the current treatment of choice for pituitary tumors.2,4 Many cats experience improvement or resolution of diabetes mellitus, although other acromegalic signs, such as prognathism and enlarged feet, often persist. However, this treatment modality is expensive and outcomes are not always successful.

Medical management using somatostatin analogues, which inhibit growth hormone (GH) secretion, has been used with some success in humans. However, this medical approach has been evaluated in acromegalic cats, demonstrating little to no effect.2,4

This Case: Treatment and Follow-Up

Sugar was treated with a definitive radiation protocol: a total dose of 50 Gy was delivered in 20 treatments using a 2-field technique at 2.5 Gy per fraction.

During hospitalization for radiation treatment, blood glucose was monitored closely:

One year later, Sugar was re-evaluated:

Based on these findings, Sugar’s radiation therapy was determined to be effective. In addition, due to the appearance that her diabetes was controlled, the PZI dose was reduced to 1 unit SC Q 12 H. 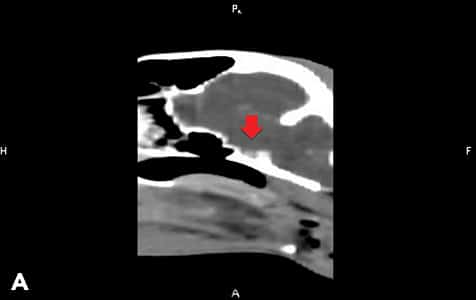 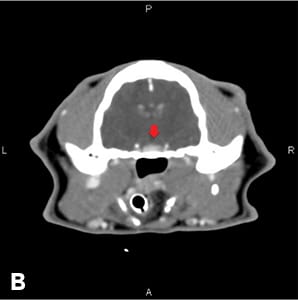 Prognosis for cats with uncontrolled acromegaly and poorly controlled diabetes mellitus is poor to guarded; without treatment most cats are euthanized within a few months of diagnosis. However, in cats, such as Sugar, in which the concurrent disease causing insulin resistance is recognized and treated appropriately, a favorable outcome is possible since glycemic control often improves. 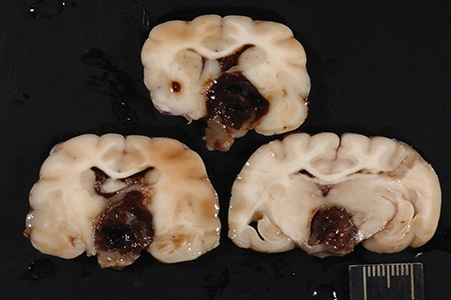 FIGURE 6. Gross pathology image of pituitary adenoma found on necropsy, showing a compressive expansile mass. This patient had hemorrhage within the tumor, which made the mass more apparent on gross pathologic evaluation. Sugar’s mass was difficult to appreciate on gross pathology due to changes from radiation therapy and the fragile nature of the postradiation tissue. Courtesy Dr. Silvia Siso 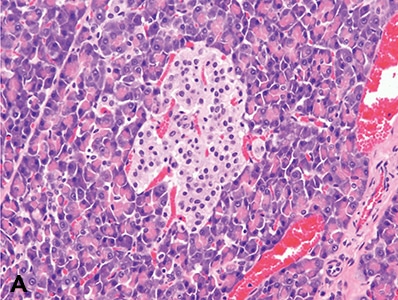 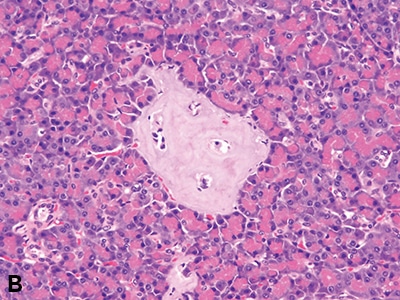 FIGURE 7. Cross sectional view of Sugar’s pancreas, with significant islet amyloidosis—a characteristic of feline type 2 diabetes. Note it is devoid of endocrine cells and replaced with amphophilic fibrillar material (amyloid). All of Sugar’s islets had this appearance (A). Image of the pancreas in a healthy cat that illustrates normal appearance of an islet of Langerhans, populated with endocrine cells (B). Courtesy Dr. Steven Kubiski

A Weighty Matter: Effectively Communicating with Clients about Pet Obesity