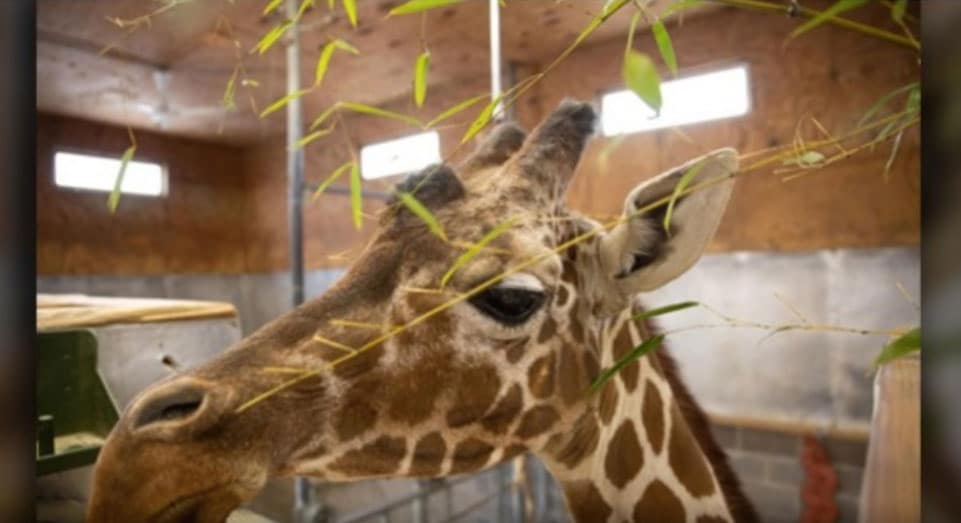 Patches, the oldest giraffe in the U.S. When she began to show signs of declining health, her caretakers installed a camera system to watch her overnight. They learned she was no longer lying down to sleep, but instead leaned against the barn walls. Photo Credit: Courtesy Zoo Knoxville.

The oldest giraffe in the U.S., Zoo Knoxville’s 31-year-old giraffe Patches, is under palliative care as the zoo staff prepares to say goodbye. Patches was born at the zoo in 1987 and has lived there ever since. The geriatric giraffe‘s health has declined in the past year. Veterinarians have been treating Patches for advanced, incurable arthritis related to her advanced age. The staff made the difficult decision after Patches’ painful symptoms worsened beyond a cure.

A reticulated giraffe’s average life expectancy is 25. Patches is older than some of her keepers and has been at the park longer than many of its employees.

The zoo attributes Patches’ longevity to the quality of care from her keepers and veterinarians at University of Tennessee College of Veterinary Medicine. But the 16-foot female (giraffes are the tallest mammals on earth) may also have inherited some good genes from her mother, Miss T — her father was named ET. Miss T died at Zoo Knoxville in 2011 at age 27.

“As with all animals, and people, arthritis is a painful condition, primarily of older animals that can inhibit ambulation, natural behavior and eventually, welfare,” says Dr. Andrew Cushing of the University of Tennessee College of Veterinary Medicine. “It can be exacerbated by numerous factors, such as cold weather, and is generally considered to be a progressive disease, in that there is no magic bullet to reverse the changes. From the standpoint of a giraffe, arthritis can have effects on quality of life. For example, the mechanics for a giraffe to lie down and stand up are convoluted, and the effects of arthritic joints can make this too difficult or painful for the giraffe to perform. Luckily, giraffe can sleep standing up, and as a species do have a very low sleep requirement, but it remains a concern for the zoo if she is not displaying normal diurnal rhythms, in comparison to her younger years or other members of the herd.”

The zoo has been giving her medication to alleviate the pain, but it‘s challenging to treat a giraffe, says Cushing.

“The nervous and suspicious nature of giraffe makes treatment difficult,” Cushing says. “We are essentially limited to oral medications for treatment protocols. Regarding diagnostics, we have been assessing her using radiography to monitor bone changes consistent with arthritis, and to rule out any other underlying disease processes, as well as using thermal imaging to highlight inflamed (hot) and thus painful areas of her limbs.”

Patches’ medical team has been using a range of anti-inflammatory and analgesic medications, and has closely monitored her response to these. “To formulate drug regimens, we use all available literature, based on giraffidae medicine and extrapolated from horses,” explains Cushing. “Unfortunately, there are limitations in knowledge regarding safe and effective doses in giraffe, and so we temper our doses with daily recording of her behaviors.”

Deciding When to Say Goodbye

For now, Patches remains under the care of Zoo Knoxville, with medical care provided by the veterinarians at the University of Tennessee. The team created a plan of care and medications for her.

“Together, we continue to utilize drug protocols and diagnostics to make her comfortable,” says Cushing. “The veterinary and husbandry staff communicate regularly with updates and combine all the information we have to determine a daily ‘score’ for Patches. We follow the trend of this and will use it in any major decisions regarding the future for her. Euthanasia is a likely eventual outcome, and we will move to this option when we feel that her quality of life and welfare is impacted to a level of which we are not comfortable with.”

According to the IUCN, where giraffes are listed as “critically endangered” on the organization’s Red List, giraffes in the wild are threatened by habitat loss, civil unrest, illegal hunting and poaching, and ecological changes.

Accredited by the Association of Zoos and Aquariums, (AZA), Zoo Knoxville supports giraffe conservation by participating in the Giraffe Species Survival Program (SSP), says Zoo Knoxville curator Petty Grieve. “We are a holding institution and have a breeding recommendation for Jumbe and Lucy or Frances,” says Grieve. “The AZA has a Giraffe SAFE program that works to impact giraffe conservation in situ. The giraffe keepers also participate in World Giraffe Day every year on June 21, the summer solstice. We celebrate giraffes on the longest day of the year for the longest-neck creatures and educate guests on the conservation needs of giraffes. The Giraffe Conservation Foundation is the organization that started World Giraffe Day. They are the only NGO in the world that focuses solely on giraffes.”

For more on veterinary end-of-life care, visit the End of Life section of our website.