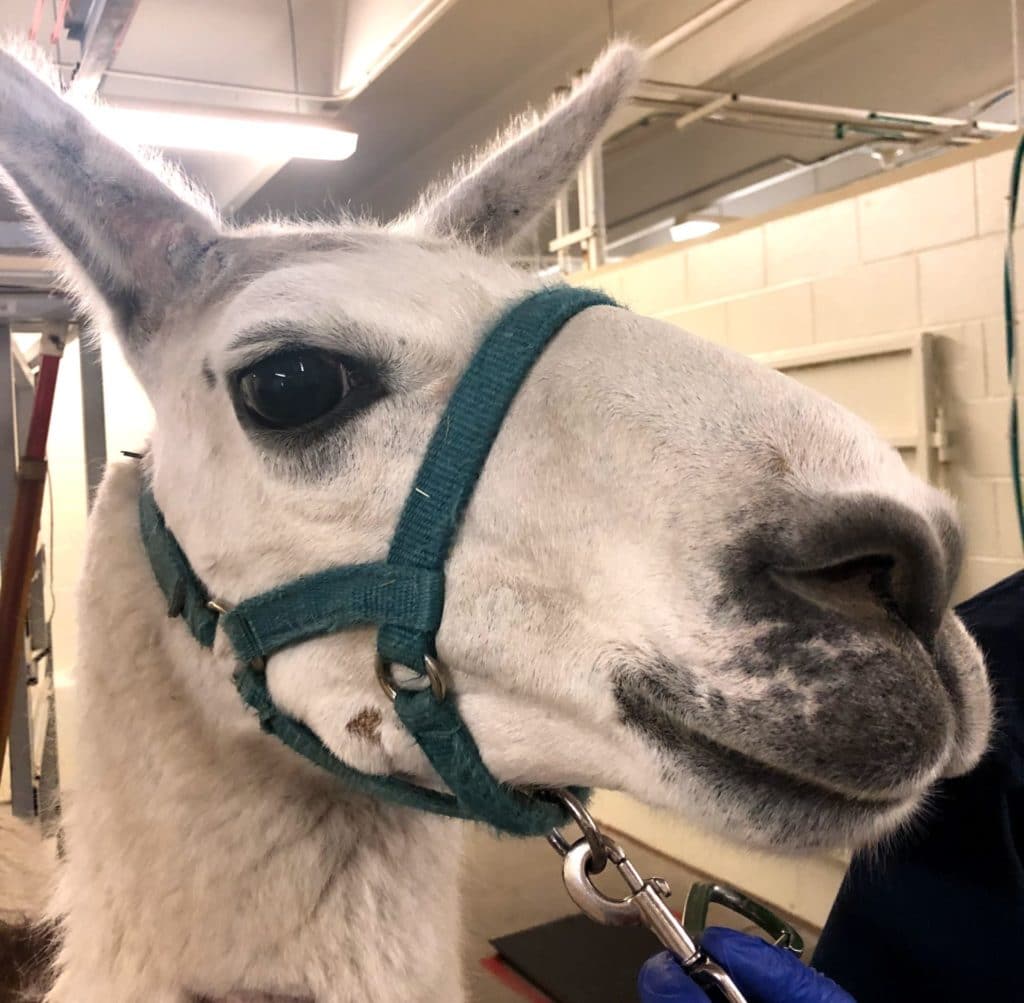 A closeup of Lewis with the wound on his cheek. Photo Credit: Kellen Bakovich/CSU.

Lewis the llama returns to Montana this weekend after dental surgery that took place earlier in the week at the James L. Voss Veterinary Teaching Hospital at Colorado State University.

Formerly known as Ike, the llama was abandoned in Yellowstone National Park in the summer of 2018 after he removed himself from a halter that pressed on a wound on his jaw that CSU veterinarians would eventually treat. Ike roamed the wilds of the park for three months and did not allow anyone to recapture him. He became famous on social media, as park visitors snapped photos of him running down a road or walking down a trail.

Luckily for him, Susi Hülsmeyer-Sinay, owner of Yellowstone Llamas and co-owner of the Yellowstone Safari Co. in Bozeman, Montana, went in search of Ike in late October 2018. Hülsmeyer-Sinay describes herself as someone who cannot tolerate seeing animals in distress or the neglect or abuse of animals. She has owned llamas for 25 years, and she knew that there was a limited window to rescue the llama. With winter approaching, it would become more challenging for him to find food, not to mention the numerous predators in the park.

Hülsmeyer-Sinay brought three of her llamas to the park, along with a few friends. They brought some snacks for Ike and did a little dance, as she described it. After a few tries, Ike followed them nearly one mile to a trailer and jumped right in. She renamed him Lewis, having found him near the lake of the same name in the southern part of Yellowstone National Park.

Her disdain for the suffering of animals led Hülsmeyer-Sinay to bring Lewis to CSU. While she had worked with a local veterinarian and had tried the use of antibiotics to treat the wound in his jaw, she knew that the llama’s mouth wasn’t healing properly.

As it turns out, Lewis had periodontal disease in teeth on both sides of his jaw. During his recent stay at CSU, he had three teeth extracted — one molar on the left and two molars on the right ­— during a procedure that lasted four hours. 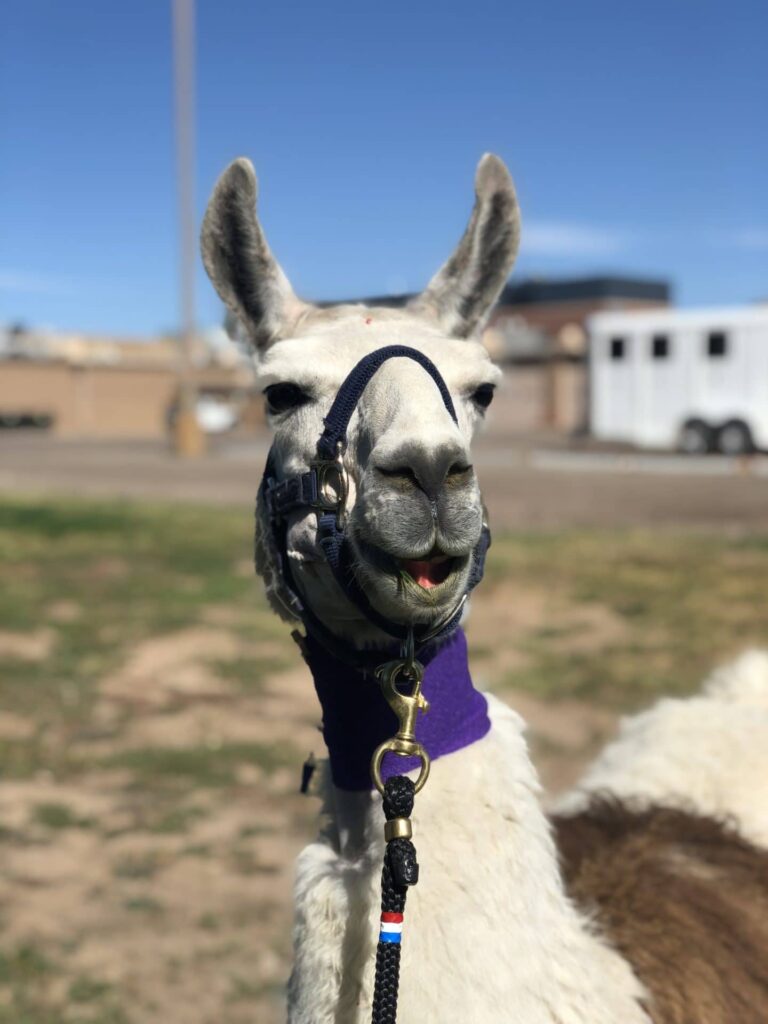 Lewis the llama outside the CSU Veterinary Teaching Hospital.

Many hands are involved in surgeries at the teaching hospital, and one essential element is the anesthesia service. Lewis required general anesthesia, which was overseen by Dr. Khursheed Mama, the anesthesiologist on duty.

Third-year resident Dr. Morgan Oakleaf worked with veterinary technician Andrea Kessens to perform the anesthesia and monitor Lewis’s anesthetic depth, respiratory and cardiovascular function. Veterinary technicians Sierra Hightower and Kevin Brewer made sure the 300-pound llama was positioned properly for placement of his breathing (or endotracheal) tube, with appropriate leg supports on a padded table to prevent nerve or muscle damage. The team also monitored Lewis through his post-surgical recovery and made sure his pain was appropriately managed.

Dr. Jennifer Rawlinson, associate professor in the Department of Clinical Sciences at CSU and chief of the dentistry and oral surgery service at the hospital, said that the surgery helped to prevent the periodontal disease and related infection from becoming worse.

“He still has a lot of really good chewing surface to be able to masticate his hay and to be a really healthy, happy pack llama,” she said.

Rawlinson estimates that she has performed hundreds of dental procedures on llamas for almost 20 years. The animals develop periodontal disease due to hay particles getting trapped between the teeth, she explained. Owners can help lessen the development of the disease by feeding llamas high-quality forage and making sure pastures have reasonable amounts of forage options, not just sticky and woody things for them to eat.

Dr. Rob Callan, professor in the Department of Clinical Sciences and head of the Livestock Medicine and Surgery Service at CSU, said that the use of vitamin E as a supplement can help, too.

“Beyond that, it’s just making sure there is a good nutritional basis for the llama and other things for basic management to keep them healthy,” he said.

Hülsmeyer-Sinay said that she was really glad that she decided to make the trip to Fort Collins and ignored the people who told her to leave him because he wasn’t that suffering much.

“We have seen that there were more teeth infected, and we would have never found that out,” she said. “And that would have been a slow death for this animal.”

Rawlinson said Lewis is a great example of how to handle periodontal disease in llamas. “We got the surgery done and getting those bad teeth out can preserve the health of the remaining teeth so that he can continue to chew his food. His future is very bright.”

This article was originally printed in CSU’s College of Veterinary Medicine and Biomedical Sciences News section, and reprinted with permission from Mary Guiden.