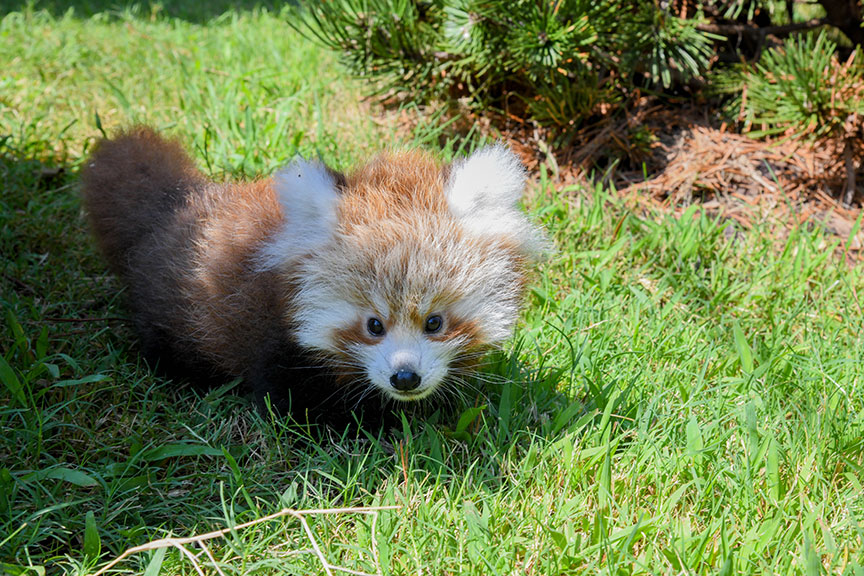 A female red panda born in June at the Oklahoma City Zoo had a birth defect in her hip that caused her leg to be malformed. Khyana’s left hind leg was amputated by veterinarians. She is adjusting to the change and being monitored closely by veterinary staff, the zoo said. Photo: Courtesy Oklahoma City Zoo

Khyana’s caretakers noticed shortly after she became mobile that her leg wasn’t functioning properly. After examining the cub, the veterinary staff discovered that Khyana had a birth deformity in her left hip that resulted in a misshapen leg.

“As Khyana grew, the leg would get more and more abnormal,” explains Dr. Jennifer D’Agostino, the OKC Zoo’s director of veterinary services. “The joints need proper pressure to form normally, and since she did not have a normal leg, the joints were already starting to deform. This would have caused her a lifetime of discomfort. She never would have been able to use the leg normally.” 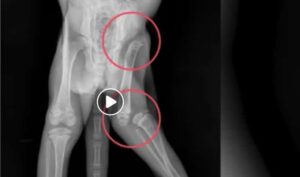 The veterinary team discovered a deformity, seen in this radiograph of her left hind leg. Credit: Oklahoma City Zoo

The OKC Zoo’s veterinary staff determined that the best course of action was to amputate Khyana’s leg to help her remain healthy and comfortable.

“The surgery itself was actually quite simple,” says D’Agostino. “Since there was no functional hip joint, an incision was made over the hip area and the muscles and tissues gently dissected down to amputate the leg. The entire surgery took only 22 minutes! The trickier part was anesthesia since she is so tiny. We had to be sure to keep her body temperature from falling and monitor vitals closely, but there were no complications at all.”

While she’s recovering from the surgery, Khyana is not available for public viewing.

“Khyana is recovering extremely well,” reports D’Agostino. “She is already back to playing with her brother and is learning to climb very well with only three legs. She has done fantastic!” 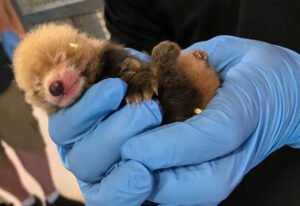 At birth, the male weighed 119 grams and the female weighed 124 grams — less than a third of a pound. By June 18, both cubs had more than doubled their birth weights. At the time, zoo officials reported that “first-time mom Leela is demonstrating appropriate maternal behaviors, such as grooming and nursing her offspring, and all are in good health.” 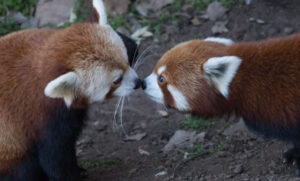 After the two cubs were born, zoo visitors were asked to help name them. The zoo’s red panda caretakers compiled name options that were representative of their natural habitat in central Asia. More than 6,300 votes were cast, with Ravi (the Nepalese word for sun) selected for the male cub and Khyana (the Nepalese word for light) chosen for the female. Their mother is 5-year-old Leela and the father is 6-year-old Thomas.

Thomas was transferred to the OKC Zoo from Norfolk’s Virginia Zoo and Leela was born at the Charles Paddock Zoo in Atascadero, California. They were relocated to the OKC Zoo in 2018 following a species survival plan (SSP) recommendation. SSP programs were developed by the Association of Zoos and Aquariums (AZA) to help oversee the husbandry, breeding management and sustainability of select animal species within AZA-member institutions, including the OKC Zoo. Since 2009, the North American Red Panda Species Survival Plan is coordinated at Tennessee’s Knoxville Zoo.

The Threats Facing Red Pandas in the Wild

Red pandas (Ailurus fulgens) are listed as an endangered species on the IUCN Red List. Red pandas are shy, secretive and largely nocturnal, so it’s difficult to get an accurate worldwide population count. Estimates range from fewer than 2,500 individuals to between 16,000 and 20,000; the OKC Zoo estimates roughly 10,000 remain in the wild. Their range includes habitats in remote areas of the Himalayan mountain range, from Nepal to central China. The most serious threats to their survival include deforestation, agriculture, cattle grazing, inbreeding and competition for resources. Red pandas are protected in all range countries, and hunting is illegal, but poaching is still a problem. 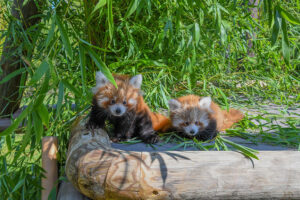 Khyana with her sibling, Ravi. Red pandas sleep most of the day and are known for being extremely shy and secretive.  Photo: Courtesy Oklahoma City Zoo

Red pandas grow to be about the size of a typical house cat — though generally longer and heavier — and have a life expectancy between 8 and 10 years.

Interested in adding exotic species to your practice? Visit our Exotic Medicine Archives.