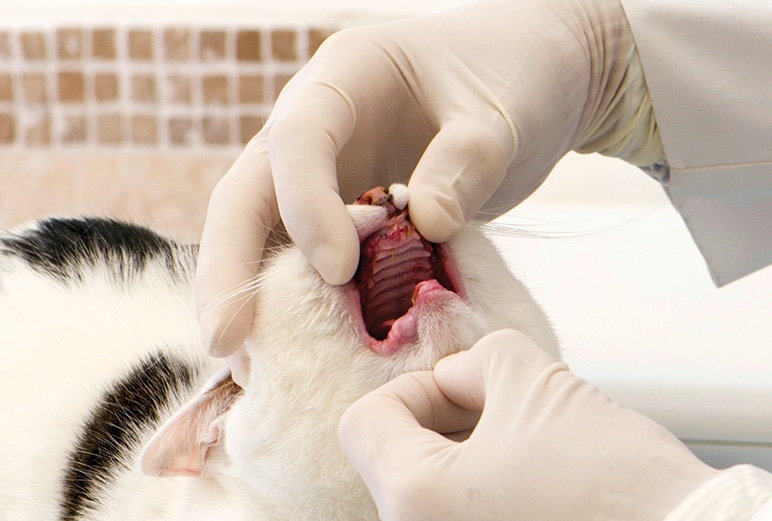 Tooth resorption in cats is prevalent, affecting 28% to 68% of mature cats, depending on the population researched.1 One study found histologic evidence of resorption in all teeth among cats with at least one clinically apparent resorption site; this led to the hypothesis that given enough time, all teeth of affected cats will develop tooth resorption.2

A related study found that, in cats with at least one tooth resorption, more than half of the nonclinical teeth had histologic evidence of root resorption; only 8% of the teeth examined from cats without tooth resorption had similar lesions.2 Tooth resorption also affects dogs to a lesser extent. Unfortunately, because an exact cause of tooth resorption in dogs or cats is still undetermined, it is unknown why cats are affected more clinically.

This article defines tooth resorption and theories about its cause and pathogenesis, and explains which teeth in cats are predisposed and how tooth resorption is classified and diagnosed. In a follow-up article, we will review therapy for this prevalent and often painful condition (Figure 1). 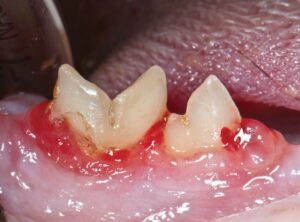 Tooth resorption is a process by which the dentin in a single tooth—or several teeth simultaneously—erodes and eventually becomes irreparably destroyed. Over time, all areas of an affected tooth, from root to crown, may become involved. This disease differs from:

At one time, these lesions were called cat cavities because of their clinical and radiographic similarity to human caries; however, cavity or caries is an incorrect term. Tooth resorption differs clinically and histologically from human caries (cavity). Caries is caused by cariogenic bacteria (mainly Streptococcus mutans) that ferment highly refined carbohydrates on the tooth’s surface. Acids are released during this fermentation process, resulting in demineralization of enamel and dentin and bacterial infection of the pulp.3

In humans, surface resorption occurs secondary to minor trauma (eg, mastication, orthodontic therapy) to the root’s cementum. Clastic cells resorb the cementum for several days when osteoclast-activating factors are released at the site of injury. When the resorption stops, cells from the periodontal ligament proliferate and populate the resorbed area, resulting in deposition of reparative tissue. In humans, surface resorption is self-limiting and reversible but can eventually progress to become destructive.

Inflammatory root (cementum, dentin) resorption is thought to be triggered by a variety of factors, including periodontal inflammation. These painful lesions often begin in the gingival sulcus around the neck (cervical portion near the cementoenamel junction) of the tooth. Inflammatory cells in the lesion may recognize osteoclast-activating factors of the bare root surface (due to removal of cementum), initiating the resorptive process just apical to the marginal gingiva. Alveolar bone adjacent to an inflammatory root resorption lesion is usually also resorbed.

Two subtypes of inflammatory root resorption have been recognized:

Tooth resorption that occurs in cats can be inflammatory but, more commonly, is characterized by noninflammatory dentoalveolar ankylosis and replacement resorption of unknown cause.

Once the root has fused to the bone, the tooth becomes part of the alveolar bone remodeling process and eventually resorbs, which may take years. This can be somewhat seen as a form of healing. When the resorptive process is complete, osteoblasts form bone in the resorbed area. Thus, the dental hard tissue is gradually replaced by bone.

These lesions are not considered to be painful as long as they remain sealed below the gingival sulcus. This process is asymptomatic (based on what we know from human dentistry). Replacement resorption does not exclude the presence of a viable pulp, nor is it confined to the root. The lesion generally starts at the cementum, located at the cementoenamel junction, and progresses apically and coronally.

Tooth resorption occurs secondary to the activity of multinucleated odontoclastic cells, which resorb the dental hard tissues. Resorption typically starts in the cementum, anywhere along the root surface, and then progresses into dentin apically or coronally.

The location of the initial area of resorption usually dictates the outcome. Tooth resorption is considered progressive.

Histologically, clastic cells are responsible for mineralized tissue resorption. Bone-resorbing cells are usually called osteoclasts; however, when these cells resorb mineralized dental tissues or mineralized cartilage, they are called odontoclasts or chondroclasts, respectively.

Resorption and repair are regulated by adhesion molecules associated with mineralized tissues (bone sialoprotein and osteopontin) and an associated integrin, alpha-v beta-3, at resorption sites.

The progression of inflammatory tooth resorption has 2 distinct stages:

The acute and chronic phases can coexist in a single lesion, with both destruction and repair occurring simultaneously.

Many studies have improved the understanding of tooth resorption, but a specific cause has not yet been identified for resorption of multiple permanent teeth in domestic cats.

Resorptions that affect the tooth crown may be caused by plaque accumulation, inflammation, and release of cytokines and lipopolysaccharides that stimulate migration of clastic cells to the area. This type of tooth resorption extends to the root, infecting the periodontal ligament and preventing replacement of lost hard tissue with bone- or cementum-like material. Eventually, the tooth becomes mobile secondary to loss of attachment or fracture from weakening of tooth substance.

Local pH changes may play a role in the pathogenesis of tooth resorption. Human bulimic patients have lesions with a similar appearance, which are caused by erosion at the cementoenamel junction due to low pH caustic stomach contents. It has been theorized, without confirmation, that tooth resorption in cats may be caused by hairball regurgitation. Additional research showed that osteoclast numbers and resorptive activity increased in an acidic environment.3,7

Areas explored and found not to be directly associated with tooth resorption include increased acid content of dry food coating and specific oral pathogenic bacteria (Actinomyces).

In general practice, tooth resorption in cats (and dogs) is commonly classified in 2 ways: anatomic extent of the lesion (stages) for record-keeping purposes and radiographic appearance (types) to assist with treatment decisions.4 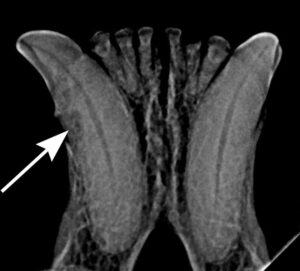 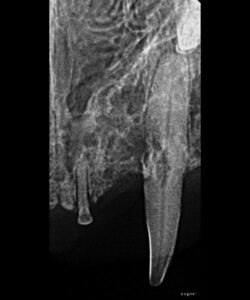 FIGURE 3. Radiographic evidence of resorption extension into the root canal.

FIGURE 4. Stage 4a tooth resorption of left mandibular canine; clinical appearance (A) and radiographic appearance (B) showing that crown and root are equally affected.

FIGURE 6. Stage 4c tooth resorption; clinical appearance of resorption of left mandibular canine root (A) and radiograph confirming that the root demonstrates more resorption than the crown (B). 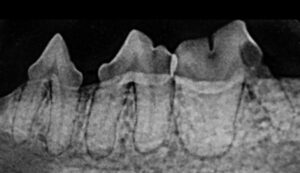 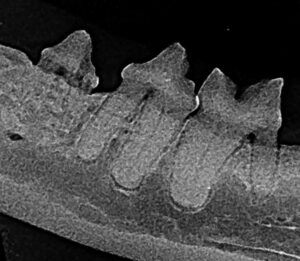 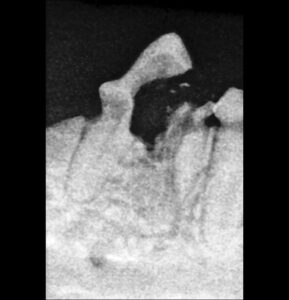 All permanent teeth are susceptible to resorption. Tooth resorption, however, is rarely diagnosed in cats younger than 2 years of age. Most affected cats develop lesions by 4 to 6 years of age.5 In addition, purebred cats, such as Abyssinian, Siamese, Russian blue, Scottish fold, and Persian breeds, appear to be affected at an earlier age.

Tooth resorption is also more prevalent in cats that:1,9,10

Examination of the conscious cat often reveals tooth resorption as an area of missing tooth substance caused by the destruction of enamel and underlying dentin. Any surface of the tooth can be affected, although most areas are apparent at the labial or buccal surfaces at the neck of the tooth near the cementoenamel junction.

The teeth most commonly affected are:

Often, resorptions affecting the canine teeth occur apical to the cementoenamel junction and, therefore, are not clinically apparent (Figure 11). 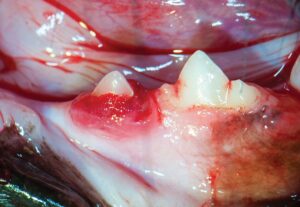 General anesthesia is necessary to conduct a thorough tooth-by-tooth clinical and radiographic examination. In certain cases, the overlying gingiva is inflamed and, in others, there is no inflammation to indicate pathology.

A dental explorer is helpful to probe for a defect or indentation at the cementoenamel junction and gingival attachment. All surfaces of every tooth should be explored. Normal anatomic appreciation is important, especially of the mandibular first molar, where furcation involvement or exposure is often misdiagnosed as tooth resorption (Figure 12).

Patients with tooth resorption exposed to the oral cavity may show:

Intraoral radiography is a critical tool to help the veterinarian classify and treat tooth resorption. Most lesions are localized to the root surfaces within the alveolar bone. Clinically detectable lesions at the cervical portion of the tooth may appear as radiolucent areas near the cementoenamel junction. When one tooth resorption is noted, other resorptions on the same tooth and multiple other tooth resorptions in the mouth are often revealed.

Jan Bellows, DVM, Diplomate AVDC & ABVP (Canine & Feline), is owner of All Pets Dental in Weston, Florida. He is immediate past president of the American Veterinary Dental College and current president of the Veterinary Dental Forum. He is a charter consultant of Veterinary Information Network’s (VIN) dental board. Dr. Bellows has authored 3 dental texts and was one of the dental experts to formulate AAHA’s Small Animal Dental Guidelines published in 2005 and updated in 2013. He received his DVM from Auburn University and completed a small animal internship at The Animal Medical Center in New York City.