Dogs with giardiasis can experience a range of clinical signs, including diarrhea, but a significant proportion are asymptomatic.

Dr. Brewer is an associate professor in the department of veterinary pathology at Iowa State University College of Veterinary Medicine. He conducts diagnostic, teaching, and research activities with an emphasis on the diagnosis and treatment of parasitic diseases.

Giardia duodenalis is a flagellated protozoan parasite with a cosmopolitan distribution. It is a common parasite of dogs as well as other mammals (e.g., cats, ungulates, rodents). The taxonomy of Giardia species has been in flux, and the most recent molecular investigations describe both zoonotic and host-adapted isolates of G duodenalis. This article briefly describes the parasite, management of giardiasis, and an update on the zoonotic potential of G duodenalis isolated from dogs.

OVERVIEW OF GIARDIA IN DOGS

Giardia trophozoites (tropho, feeding; zoite, life/animal) are the form of the parasite that attaches to enteric epithelial cells. While trophozoites are not frequently found in stool, they are occasionally present in diarrhea. Trophozoites differentiate into a cyst stage before being passed into the environment in feces. The cyst stage is considered the infectious form and must be ingested by a subsequent host. Cysts are common and may be found in soil, water, or possibly the hair coat of dogs.

Giardia is ubiquitous, and dozens of studies have aimed to describe its prevalence in dogs. In some populations the prevalence can be 45% or greater, with specific outbreaks reported in kennels affecting most dogs present.1 Importantly, many dogs lack clinical signs. Giardia infects dogs throughout the world and needs to be considered in the differential diagnosis for diarrhea.

Host specificity of Giardia species has long been a matter of interest, and the understanding of Giardia population structure has improved substantially over the past 20 years. Genetic studies have suggested that G duodenalis is a single species that consists of at least 8 genotypes (A through H), typically referred to as assemblages.2 Assemblages A and B are found in humans and animals, and some, but not all, subtypes within these assemblages are considered zoonotic. Other assemblages appear to have a higher level of host adaptation, with C and D predominating in dogs. Assemblages C and D are not yet reported in humans.

Giardia assemblages can be further divided into subassemblages (I, II, II, etc.); some of the subassemblages are identified as zoonotic. Unfortunately, many of the past studies precede the practice of subtyping, and fewer studies have this level of resolution. Subtyping studies have revealed subassemblages AI, AII, and BIII/IV in humans and dogs;3 however, these reports are sparse (14 dogs total).4

The role of dogs in the transmission of human giardiasis is unresolved, but the data currently available suggest that most human infections are anthroponotic. Besides the few cases of dogs and humans in close proximity with similar subassemblages, there is not enough evidence to make comprehensive conclusions about shedding of zoonotic Giardia by dogs. The bulk of the current molecular evidence suggests that dogs are mainly infected by dog-adapted isolates that are less likely to be transmitted to humans. Still, the concern for a potential zoonosis should be communicated to clients, particularly those susceptible to infection, such as the immunosuppressed.

Transmission of Giardia Between Hosts

At the time of this writing, there is little molecular evidence to suggest that dogs are major sources of human infection. Dogs are most likely to be infected by ingesting cysts shed by other dogs.

The trophozoites of Giardia inhabit the small intestine, where they replicate by binary fission. Trophozoites either float free in the lumen or attach themselves to the mucosal surface with a large ventral sucking disk.

Pathogenesis and Clinical Signs of Giardia

The pathogenesis of giardiasis in dogs is not completely elucidated, and there are likely multiple pathways by which parasites can cause disease. Alterations of normal flora, production of toxins, blunting of microvilli, inhibition of enzymes, and hypersecretion of chloride ions have all been proposed.5 More recently, there has been interest in apoptosis of enterocytes following trophozoite attachment. In this model, attachment leads to alterations in caspase and apoptotic pathways, resulting in degradation of intercellular junctions and barrier dysfunction.5 Affected dogs experience a spectrum of clinical signs ranging from asymptomatic to severely affected, with disease manifesting in acute, intermittent, or chronic timeframes. The insult to enterocytes results in maldigestive malabsorptive diarrhea with an increase in intestinal motility. On the other hand, a significant proportion of dogs are without clinical signs.

Diagnosis of Giardia in Dogs

Testing symptomatic (intermittently or consistently diarrheic) dogs is recommended, using a combination of direct smears, centrifugal fecal flotation, and antigen detection or fecal enzyme-linked immunosorbent assays (ELISAs).6 Repeated testing over multiple days may be required to reveal infection. Examination of feces will reveal cysts (Figure 1) and, much less commonly, trophozoites (Figure 2). Zinc sulfate flotation is preferred by some diagnosticians because it does not distort cysts. The osmotic pressure of saturated sugar solution can distort cysts and give them the appearance of a deflated ping-pong ball. 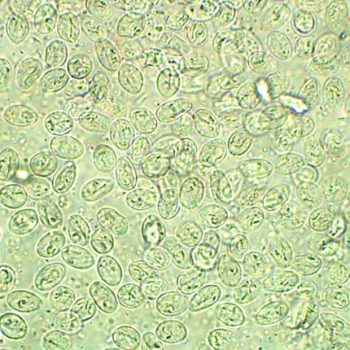 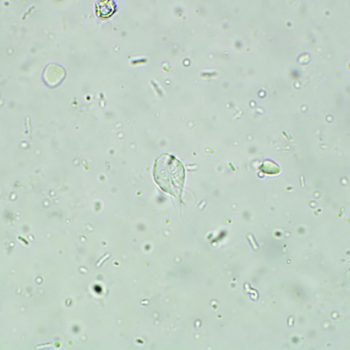 Antigen detection tests have a high level of analytical sensitivity and are best used to confirm suspected cases rather than as a screening tool. In other words, antigen testing will reveal a high number of asymptomatic dogs. The consensus among parasitologists is that asymptomatic dogs may not require treatment unless there are other complicating factors, such as living with immunocompromised humans or dogs.6

Treatment of Giardia in Dogs

No drugs are approved for the treatment of giardiasis in dogs in the United States. The Companion Animal Parasite Council recommends the following:6

Fenbendazole is approved for the treatment of giardiasis in dogs in Europe. The use of a combination product consisting of febantel, praziquantel, and pyrantel temporarily stopped cyst shedding in dogs,7 but there are not much additional data supporting this treatment.

Albendazole has been used in the treatment of giardiasis; however, there is apprehension about using this drug owing to potential bone marrow toxicity. Albendazole toxicity has been reported in humans, cats, pigs, camelids, and a variety of birds, although it is still used in some of these species.8 In one study, administration of 4 doses of 25 mg/kg was successful in eliminating cyst shedding in dogs with no apparent toxic effects.9 The evidence for toxicity stems from 17 adverse event reports to the Food and Drug Administration Center for Veterinary Medicine (FDA-CVM),10 a published report of suspected toxicosis in a single dog and a single cat,11 and 4 reports of adverse experiences to the United States Pharmacopeia (USP) veterinary practitioner’s reporting program.10 Neither FDA-CVM nor USP recorded complaints associated with use of albendazole in cats. Given its apparent usefulness in treating giardiasis, the use of albenzadole deserves to be re-examined.

The primary goal of giardiasis treatment is to resolve diarrhea. Elimination of infection is desired but is much more difficult to achieve. As such, it may be advisable to forgo additional diagnostic testing after a course of treatment and the resolution of clinical signs.

Follow-up investigation can be done 24 to 48 hours after the completion of treatment.6 It is wise to use centrifugal fecal flotation for detection of cysts instead of an ELISA or antigen detection kits since asymptomatic animals may be antigen-positive for some time. Infections that are refractory to treatment may be a sign of immune compromise or another underlying disease condition.

Prevention and Control of Giardia

Preventing and controlling giardiasis can be a difficult task; the cysts persist in the environment and on the hair coat of dogs. Some steps can help decrease, but not eliminate, the risk of reinfection or transmission to other dogs. For example, dogs can be bathed to remove cysts in the hair coat. Feces should be disposed of daily in a manner that does not expose other animals. Surfaces can be cleaned with boiling water or steam.

Dogs infected with Giardia experience a spectrum of clinical signs, and diagnostic testing is recommended primarily for symptomatic dogs. At the present time, the molecular evidence suggests that dogs are a relatively minor source of human infection. Giardia is a ubiquitous pathogen and should continue to be a diagnostic differential in cases of both acute and chronic diarrhea.

10. Meyer EK. Adverse events associated with albendazole and other products used for treatment of giardiasis in dogs. JAVMA 1998;213(1):44-46.