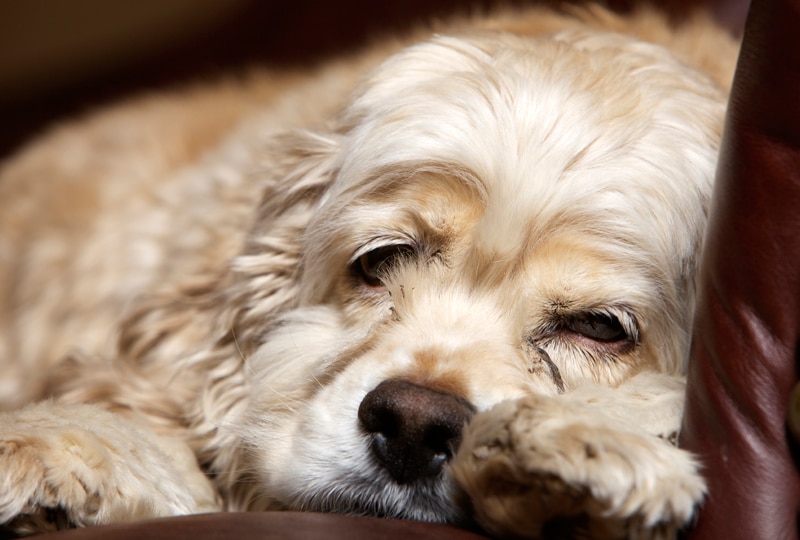 Immune-mediated hemolytic anemia is one of the most common immune-mediated hematologic disorders in dogs and cats. Part 1 of this 2-article series discusses pathophysiology and diagnosis of IMHA, including patient predilection, history and clinical signs, physical examination, diagnostics, and differential diagnoses.

In cats, there is no breed predilection for IMHA, and the condition is usually secondary to an underlying cause.3

IMHA is a type II immune reaction, where antibody and/or complement formation against RBCs causes accelerated cell destruction and subsequent anemia. The anti-RBC antibodies can be either immunoglobulin G or M (IgG or IgM).4When the body is correctly responding to an immune reaction, antibodies ensure an appropriate immune response while the complement system enhances the ability of antibodies and phagocytic cells to clear pathogens. However, in cases of IMHA:

When a patient presents with possible IMHA, history should include a detailed account of any recent medications or vaccines. Historical clues that suggest a possible underlying or triggering disease process should also be investigated (Table 1).

Clinical signs seen in IMHA patients often include those associated with anemia and tissue hypoxia, including:

When anemia is severe and acute in onset, patients tend to be the most significantly affected. When red blood cell (RBC) destruction is more chronic, patients may only be mildly affected despite marked anemia.

Other physical examination findings may include:

Figure 1. Jaundice in a dog with severe IMHA 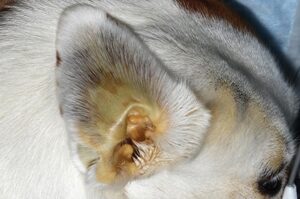 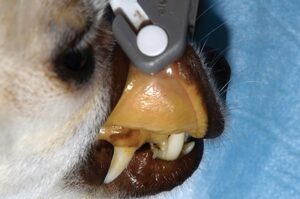 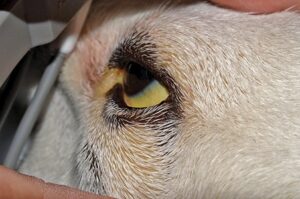 Initial diagnostics in an anemic patient should focus on identifying the cause of the anemia. A final diagnosis of IMHA is based on evidence of accelerated RBC destruction, with an underlying immune-mediated pathogenesis.

There is no single test that is definitively diagnostic for IMHA. Instead, evidence from various analyses is used to determine the diagnosis (Table 2). The following signs and results support a diagnosis of primary IMHA:

In IMHA patients, complete blood count (CBC) with blood smear analysis often reveals anemia and RBC changes, which are suggestive of a regenerative response, such as polychromasia, anisocytosis, and nucleated RBCs.

Spherocytes may also be seen on blood smears. Spherocytes are small RBCs with a loss of central pallor produced by incomplete destruction of RBCs by macrophages (Figure 2). Spherocytosis is very suggestive of IMHA. 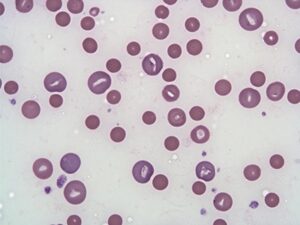 Figure 2. Marked spherocytosis observed on a Wright’s-stained blood smear from a dog with IMHA; spherocytes are recognized as smaller RBCs that lack central pallor. They form when macrophages remove a segment of RBC membrane without loss of intracellular contents; the remaining cell membrane must form a globoid sphere in order to stretch over and contain the cytoplasm.

The blood smear should also be carefully evaluated by an experienced clinical pathologist for:

High levels of anti-RBC antibodies sometimes result in their attachment to more than one cell, causing spontaneous RBC agglutination. Agglutination may be appreciated as red speckles when blood is placed in an EDTA tube (Figure 3) or onto a microscope slide. 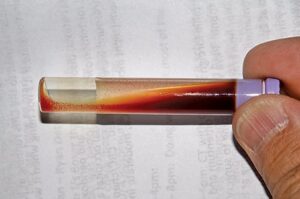 Figure 3. Autoagglutination observed as red speckles in EDTA-anticoagulated blood from a dog with severe IMHA.

The slide agglutination test can be easily performed in practice, and is used to differentiate true autoagglutination from rouleaux formation (nonimmune RBC adhesion).

Since autoagglutination is only seen with high antibody levels, a negative slide agglutination test does not rule out IMHA. 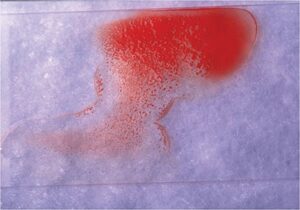 Figure 4. Positive slide agglutination test in a dog with IMHA, demonstrating obvious macroagglutination. Since false positives can also occur, the Coombs’ test should be carefully interpreted in each individual patient. 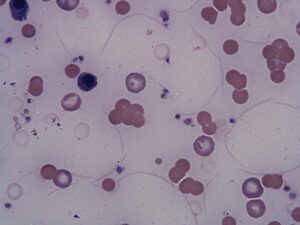 Figure 5. Microagglutination observed on a standard Wright’s-stained blood smear from a dog with IMHA; RBCs are strongly adhered to one another by a high level of anti-RBC antibodies that are attached to more than one cell. 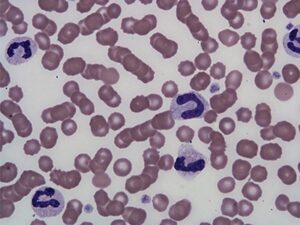 Figure 6. Rouleaux observed on a Wright’s-stained blood smear from a cat with a serious systemic illness. RBCs can form stacks in conditions associated with high plasma protein levels; while these stacks can appear as speckles to the naked eye, cell-to-cell bonding is weak and easily dispersed by saline.

The direct Coombs’ test is also known as the direct antiglobulin test (DAT) and identifies antibodies or complement adhered to RBCs. IMHA patients that do not demonstrate autoagglutination may still test positive on the Coombs’ test. However, diagnostic sensitivity of the Coombs’ test ranges from 60% to 89%, so a negative test does not exclude IMHA.

Coagulation tests, such as the 1-stage prothrombin time (PT) or activated partial thromboplastin time (aPTT), are indicated to assess for hemostatic disorders, such as:

D-dimer concentration or antithrombin activity may be needed to characterize DIC or thrombotic diseases. Both conditions can be common and serious complications of IMHA.

Marrow evaluation is indicated if there is a persistent (beyond 3–5 days) nonregenerative anemia or pancytopenia is present on blood analysis.

Testing for infectious causes of hemolysis, such as Mycoplasma haemofelis, Babesia canis, or Babesia gibsoni should be considered in individual patients based on signalment, clinical signs, and geographic location.

Diagnostic imaging is indicated to identify underlying causes of IMHA, such as neoplasia.

Part 2 of this series—Management of Immune-Mediated Hemolytic Anemia—will be published in the September/October 2013 issue of Today’s Veterinary Practice.

Todd M. Archer, DVM, Diplomate ACVIM, is an assistant professor of small animal medicine in the Department of Clinical Sciences at Mississippi State University College of Veterinary Medicine. Dr. Archer’s clinical interests include hematology, immunology, and endocrine disorders as well as interventional radiologic procedures. His research has primarily focused on T-cell responses in dogs to cyclosporine using both flow cytometry and qRT-PCR. Dr. Archer has spoken at national, state, and local meetings and also published research articles regarding his work with cyclosporine. He received his DVM and completed an internship and residency at Mississippi State University.