Although little is known about the long-term prognosis of small animals with primary erythrocytosis, it can typically be managed for months to years while maintaining a good quality of life.

Dr. Moon is an internist in small animal clinical practice. She is a graduate of the University of Wisconsin-Madison and completed her residency at Oregon State University in 2018. Her clinical interests include hematology, infectious disease, and the intersections of human and animal health. 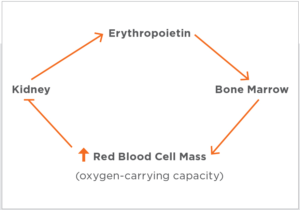 Primary absolute erythrocytosis is the result of RBC production in the bone marrow, independent of stimulation by the normal hypoxemia–erythropoietin feedback loop. Although this condition is sometimes termed polycythemia vera because of clinical similarities with the human disease of the same name, these conditions are not synonymous because diagnosis of polycythemia vera in humans requires documentation of diagnostic criteria that are not present or not evaluated in dogs. Most notably, although the identification of characteristic bone marrow abnormalities is a major criterion for diagnosis of polycythemia vera in humans,11 bone marrow biopsy is not useful for the diagnosis of primary erythrocytosis in dogs. This case report describes a case of primary erythrocytosis in a dog, from initial presentation through treatment.

The patient was an 8-year-old intact male border collie presented to his primary care veterinarian for hematemesis. At the time of examination, mild preputial bleeding was noted. A complete blood count (CBC) revealed a markedly elevated hematocrit of 83%. Eight days later, after additional preputial bleeding was noted, a recheck CBC indicated a persistently elevated hematocrit (86%). Jugular phlebotomy removed 500 mL of whole blood, and the patient was referred for further evaluation. Amoxicillin was given in case urinary tract infection was a cause of the preputial bleeding.

At the time of presentation to our referral hospital, no additional bleeding episodes were reported. Physical examination revealed moderate conjunctival hyperemia but was otherwise unremarkable, with no evidence of dehydration. An additional CBC indicated that the spun packed cell volume (PCV) was elevated at 76%; plasma protein was within reference range at 6.7 g/dL. A moderate reticulocytosis of 393 370/µL was present. RBC indices were mean cell volume (MCV) within reference range at 68.7 fL and mean corpuscular hemoglobin concentration below reference range at 30 g/dL. Other blood abnormalities included moderate leukocytosis (25 240/µL) characterized by moderate neutrophilia (21 706/µL) with a regenerative left shift (1262 bands/µL) and moderate thrombocytopenia (81 000/µL). A serum chemistry panel revealed no abnormalities. On visual inspection, blood subjectively appeared normal red, which was inconsistent with methemoglobinemia.

To rule out causes of secondary erythrocytosis, additional testing was performed. Echocardiography ruled out structural heart defects causing right-to-left shunting. An arterial blood gas sample indicated normoxemia. A computed tomography scan of the abdomen to screen for neoplasia that could cause paraneoplastic erythrocytosis showed focal thickening of the cecum. This finding was considered most likely to be secondary to incomplete filling during the study; however, focal typhlitis or neoplasm could not be definitively ruled out at that time.

After 500 mL of blood was removed by jugular phlebotomy, 800 mL of lactated Ringer’s solution was administered through a cephalic catheter. The PCV after phlebotomy was 65%. Two weeks later, the patient’s PCV had increased to 75% and another 500 mL of blood was removed from the jugular vein. PCV after the second phlebotomy was 55%. After the target PCV was attained, hydroxyurea treatment was initiated because the patient was reactive to handling and required heavy sedation to be safely restrained for phlebotomy. Hydroxyurea was initially dosed at about 40 mg/kg PO q24h. CBCs were monitored biweekly to ensure that the medication would maintain a PCV below 55% without causing dangerous myelosuppression. The dosage was gradually tapered to a final dosage of about 40 mg/kg PO q48h. Attempts to further taper this dose resulted in recurrence of elevated PCV. No myelosuppression was noted, and the patient’s PCV remained in the high-normal range. At this point, the interval between CBCs was extended. No recurrence of hematemesis or preputial bleeding was reported.

Eleven months after initiation of hydroxyurea treatment, onycholysis and skin pigmentation changes of the ventrum developed. Because these dermatologic changes were suspected to be adverse effects of hydroxyurea, treatment was discontinued, after which the changes resolved completely.

Six months after discontinuation of hydroxyurea, the patient’s PCV again increased to 65%. Alternative treatment options were discussed, including placement of a venous access port to facilitate phlebotomy or treatment with medicinal leeches. Ultimately, the client declined these treatment options on the basis of cost and impracticality, respectively. After careful client counseling, the decision was made to perform phlebotomy to decrease PCV to 55% and to restart hydroxyurea at 1000 mg PO q48h with the goal of lengthening the interval between (but not eliminating) phlebotomies.

Five months after the previous phlebotomy, the patient was presented for the final referral visit. PCV was 66%, and the dermatologic changes had not recurred. A phlebotomy was performed. Because the current frequency of phlebotomies was reasonable when balanced with the ability to avoid recurrence of dermatologic toxicity, it was decided to not attempt to increase the dose of hydroxyurea. The patient was doing well at this visit, after which he returned to his primary care veterinarian for monitoring.

The goal of treatment for erythrocytosis is to maintain a PCV of 55% or lower to eliminate or minimize signs of hyperviscosity. The cornerstone of treatment for absolute erythrocytosis in patients for which the underlying cause cannot be identified or resolved in both human12 and veterinary medicine is phlebotomy. The typical volume removed is 15 to 20 mL/kg.13 In some patients, intermittent phlebotomy is the only treatment necessary to achieve control of PCV and clinical signs.4,14 Placement of a vascular access port15 can facilitate phlebotomy in patients for which frequent hospital visits and restraint are not unduly stressful. Hirudotherapy, the use of medicinal leeches to control erythrocytosis, in a cat has been described.16 Each leech is expected to remove approximately 10 mL of blood, and bleeding continues for 24 hours after removal of the leech. Because of the small volume of blood each leech removes, this approach may be most practical for cats or small dogs.

In human patients with polycythemia vera, the chemotherapeutic drug hydroxyurea is administered in addition to phlebotomy to patients with intermediate to high risk for thrombotic or bleeding complications.17 In dogs, hydroxyurea is used to control RBC mass in patients with absolute erythrocytosis (primary or secondary) for which the cause of the erythrocytosis cannot be resolved and for which the required interval between phlebotomies is unacceptably short. For some patients, the disease may be controlled with hydroxyurea alone,3,13 whereas some may require concurrent intermittent phlebotomies to maintain a PCV within the target range.18 Various dosing regimens have been reported, including 40 to 50 mg/kg q48h with titration based on monitoring3 or a loading dose of 30 mg/kg q24h for 7 days followed by a maintenance dose of 15 mg/kg q24h.13 Hydroxyurea is usually well tolerated. Reported adverse effects in dogs include myelosuppression,19 gastrointestinal upset,13 dermatologic reactions,18 and onychomadesis (toenail loss).20,21 It is not known whether dogs with primary erythrocytosis and those with secondary erythrocytosis (i.e., patients with cardiac defects) would benefit from different dosing schemes.

This report underscores multiple factors relevant to the general practitioner. It is typically the primary care veterinarian who documents persistent erythrocytosis, so an understanding of possible explanations for this finding is critical. FIGURE 2 provides a simplified flow chart to assist with decision-making when dealing with patients with persistently elevated hematocrit. When relative erythrocytosis has been ruled out, patients should be referred to a specialty hospital for further diagnostics because underlying causes of secondary erythrocytosis may be resolvable, and if not resolvable, an underlying cause such as a cardiac defect may change the treatment plan and prognosis. If primary erythrocytosis is confirmed, however, monitoring and treatment require no specialized equipment and can therefore be managed by a general practitioner with an understanding of the disease. The occurrence of dermatologic adverse effects resulting from hydroxyurea treatment highlights the need to determine an individualized treatment plan, which requires knowledge of the treatment options available. 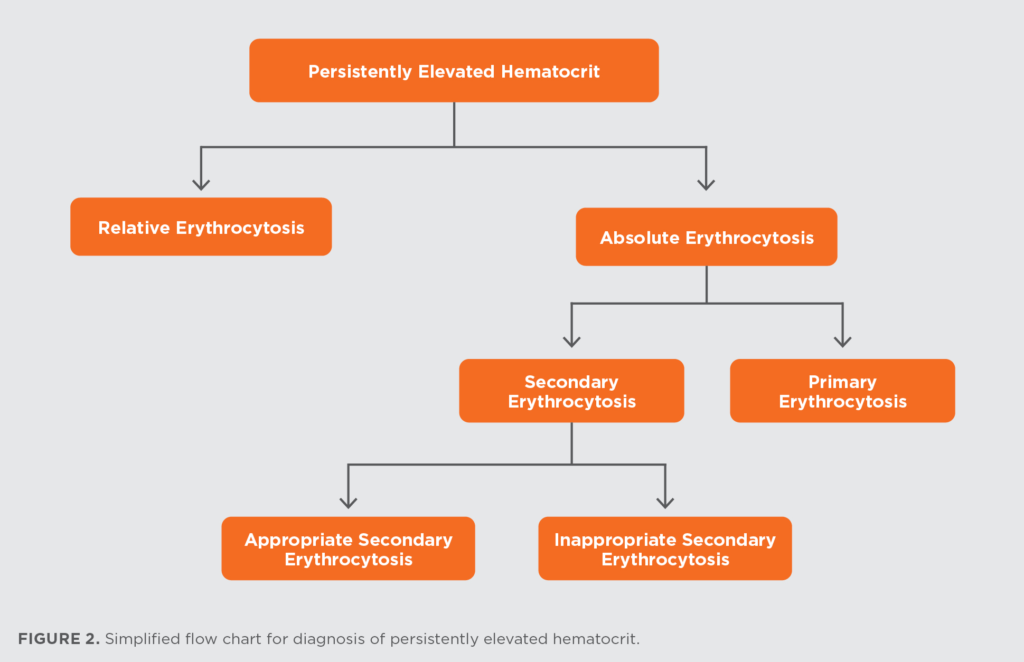 When clients are weighing the costs and benefits of treatment, they look to their primary care veterinarian for an understanding of prognosis. General practitioners should discuss that although little is known about the long-term prognosis, the disease can typically be managed for months to years while maintaining a good quality of life.