HBOT and HILT were used as components of a plan to treat pressure necrosis in this soft-coated Wheaten terrier.

Dr. Ancier received her doctorate in veterinary medicine from Western University of Health Sciences, where she was the national student president of the American Holistic Veterinary Medical Association. She obtained veterinary acupuncture certification (CVA) from the Chi Institute in Florida and Certified Canine Rehabilitation Practitioner certification (CCRP) from the University of Tennessee. Dr. Ancier uses holistic medicine as part of an integrative approach toward optimal animal wellness and healing.

Who Will Win the Grand Prize? The 5 finalists for the Case Report Challenge, brought to you by Dechra Veterinary Products, will be published in Today’s Veterinary Practice during 2021. TVP’s Facebook followers will then select the grand-prize winning case report from among the finalists; the winner gets a trip to VMX 2022, including registration, hotel, and airfare.

Two therapies that are used to accomplish these things are hyperbaric oxygen therapy (HBOT) and laser therapy.

HBOT delivers 100% oxygen to the tissues at an atmospheric pressure up to 3 times normal (sea level). It has been used to treat hypoxic and ischemic wounds in humans and animals. In an experimental study with rats, HBOT significantly counteracted the negative effects of ischemia, resulting in accelerated healing and closure of ischemic wounds.2 HBOT has significant angiogenic effects in tissues that have been deprived of oxygen by local vasculature disruptions. Local tissue oxygenation is also crucial for soft tissue wound healing because fibroblasts depend on oxygen during collagen formation.3 Because polymorphonuclear leukocytes use oxygen to selectively kill bacteria, the increased local oxygen tension of HBOT also provides healing wounds with substantially higher resistance to infection. HBOT also aids wound healing by preserving energy metabolism and reducing edema.4

Laser (light amplification by stimulated emission of radiation) therapy, or photobiomodulation therapy, is the use of light to enhance wound healing. Laser therapy has biostimulatory effects on cellular mitochondrial chains, which absorb laser at specific wavelengths. Laser therapy stimulates the cells to release other signal molecules, such as nitric oxide, cytokines, and growth factors, which enhances adenosine triphosphate formation and therefore tissue regeneration and healing.5 One published review cites studies that have shown that laser therapy results in increased fibroblast activity, collagen synthesis, and angiogenesis, all of which are essential components of wound healing.5 Laser therapy also limits inflammation and pain by inhibiting anti-inflammatory cytokines and stimulating the release of endogenous opiates. Although low-level laser therapy has been well studied, research has recently shifted toward high-intensity laser therapy (HILT), which delivers an increased therapeutic dose and has the ability to influence deep biological structures.6 Preliminary research has shown that increasing the intensity of the laser source has the potential to reach higher clinical effectiveness.7

This case report describes the successful use of HBOT (FIGURE 1) and HILT (FIGURE 2) to treat pressure necrosis secondary to improper wound bandaging. 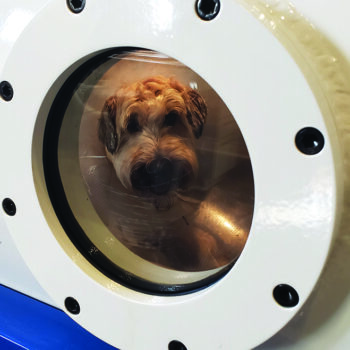 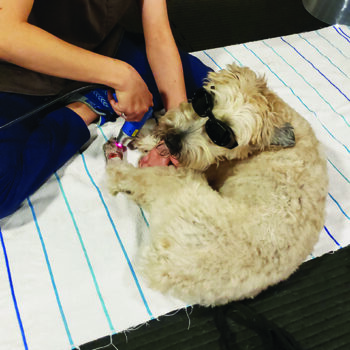 On September 14, 2019, a 4-year-old, spayed female, soft-coated Wheaten terrier was brought to her primary care veterinarian because she was limping on her left hind limb; the client noticed a torn paw pad after her walk that day. The veterinarian confirmed a moderately inflamed torn pad on the third digit, clipped and cleaned the area, and applied a soft padded bandage. The dog was given meloxicam (0.1 mg/kg SC) and sent home with cephalexin (24 mg/kg PO q12h) for 7 days. At follow-up evaluation the next day, the pad appeared to be healing well. The client was instructed to minimize the dog’s activity for a few days, to not allow her to lick the site, and to bring her back in for bandage changes every few days.

The dog was not returned to the veterinarian until 6 days later (September 20), when she had chewed off a bandage that the client had applied and secured with a hook-and-loop strap. The paw and distal metatarsus were markedly firm, swollen, erythematous, and with oozing serosanguinous fluid. A circumferential ring at the proximal aspect of the swelling corresponded with where the strap had been applied. The digits felt cold. Cephalexin and meloxicam were prescribed for another 7 days. The dog was very painful at this visit, and tramadol (4 mg/kg PO q8h to q12h), gabapentin (8 mg/kg PO q8h), and enrofloxacin (8 mg/kg PO q24h) for 15 days were prescribed. Two days later (September 22), a swab of the exudative paw tissue was submitted for culture and sensitivity; results indicated a mixed infection with Enterobacter species, Enterococcus faecalis, Staphylococcus pseudintermedius, and a nonenteric gram-negative rod that the laboratory was unable to specifically identify. When tissue necrosis was noted 2 days later (September 24), the primary veterinarian referred the patient to Holistic Veterinary Care for HBOT, where she was seen that afternoon.

Veterinarians at Holistic Veterinary Care noted a circumferential ring of black necrotic tissue proximal to the metatarsal pad where the client’s bandage had been secured (FIGURE 3). All tissue distal to the ring was erythematous, edematous, and exudative. The superficial layers of the epidermis were sloughing off. The dog was not bearing weight on the limb, and the foot was warmer than the rest of the body and painful to the touch. The remainder of the physical examination was unremarkable. 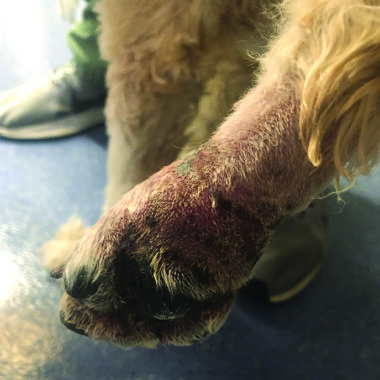 Figure 3. Wound on day 1, before therapy.

The diagnosis was ischemic injury to the left hind foot secondary to a strangulating bandage. The warmth of the foot suggested some degree of circulation, although the degree of swelling, edema, necrotic tissue, and sloughing raised concerns about the viability of the underlying tissue. The client was given a guarded prognosis for saving the foot and told that amputation may become the only viable option. In an attempt to preserve as much tissue as possible, the recommendation was to begin HBOT and HILT. The client agreed and treatment began that afternoon.

The HBOT chamber was set to 2 ATA (atmosphere absolute), which is 2 times the normal atmospheric pressure, for 60 minutes. A 3-hour rest period between dives allowed for the effects of increased tissue oxygenation before the second dive.

HILT was delivered by a Smart RLT Vet Laser (SOUND, soundvet.com/laser-therapy) set for noncontact open wounds at 2020 total joules (J) (220 mJ/pulse, 30 pulses/sec, for 5 min 6 sec). The Smart RLT Vet Laser has output parameters that provide both therapeutic (photo only) and regenerative (photo-acoustic) effects; however, the protocol used on this patient was most likely below the threshold that would create a photo-acoustic effect. Note that the current equivalent is the SmartRLT Sport (equine.soundvet.com/laser-therapy/smart-rlt-sport). Before each laser treatment, the paw was soaked in dilute chlorhexidine solution for 10 minutes to help release the sloughing tissue. To protect the skin after each laser treatment, an emulsion of burdock root, echinacea root, and yarrow herb in olive oil and beeswax was applied to the foot. Nine days after treatment began (October 3), the final laser treatment was performed without hyperbaric oxygen because the foot condition had improved significantly. In that the foot was healing well, additional treatments were deemed no longer necessary; however, the previously prescribed medications were continued.

Positive results were noted almost immediately after therapy began. After the first HBOT session (treatment day 1, September 24), the foot appeared slightly less edematous and erythematous. The next morning, however, the foot again appeared erythematous, exudative, and edematous (FIGURE 4), but on the morning of day 3 it showed dramatic improvement with marked resolution of the edema and swelling (FIGURE 5). The necrotic band of tissue had sloughed off, revealing a healthy bed of granulation tissue. The foot was not as warm to the touch, and the dog began to partially bear weight on the foot. Continued improvement was noted through day 4, with further swelling reduction and more weight bearing (FIGURE 6). Small pieces of superficial necrotic tissue continued to slough off. After treatment on day 4, the dog was discharged and scheduled for a follow-up evaluation and treatment 6 days later (day 10, October 3). At that visit, the foot appeared to be nearly completely healed (FIGURE 7). All swelling, edema, and erythema had resolved and the dog was bearing full weight. No pads or distal digits indicated circulatory compromise. The patient received HILT therapy that day, after which she was discharged with no further laser or oxygen therapy needed. 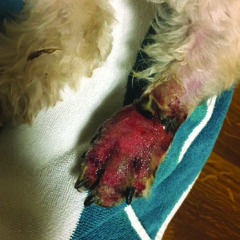 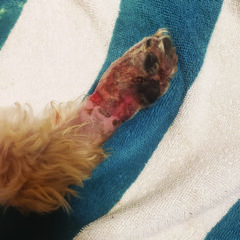 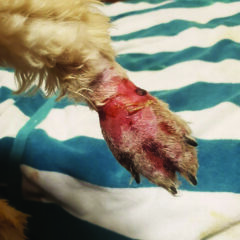 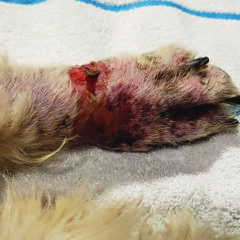 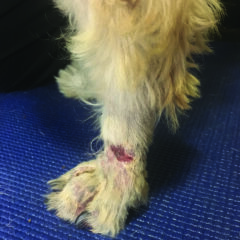 On day 11 (October 4), the patient was re-examined by her primary veterinarian, who prescribed pentoxifylline (26 mg/kg PO q12h) for 6 months and mupirocin 2% ointment (to be applied topically to the remaining irritated skin q12h until it was fully epithelialized).

Pressure necrosis wounds in companion animals are most frequently a complication of improper bandaging or accidental limb constriction from foreign material. The severity of these injuries can range from superficial damage to complete loss of tissue vascularization. For more severe cases, in which tissue perfusion is completely lost, often the only lifesaving treatment available is amputation.

For the case presented here, the progression of the tissue pathology in the foot before alternative therapy had begun led to concern that amputation would become necessary. However, despite severe tissue damage, at least some circulation was preserved. Although every case is unique, the rapid recovery of this patient despite the degree of tissue morbidity makes a compelling case for using HBOT and HILT for such cases before considering amputation.