Leptospirosis should be recognized as a significant infectious disease in dogs, with variable incidence that is dependent on unpredictable short- and long-term weather patterns and influenced by anthropogenic factors that may affect exposure of dogs to wildlife vectors.

Kenneth R. Harkin, DVM, Diplomate ACVIM (Small Animal Internal Medicine), is a professor and head of the Section of Medicine in the College of Veterinary Medicine at Kansas State University. His research interests include infectious diseases and immunology, with a special interest in leptospirosis. He currently lectures on gastroenterology, hematology, hepatology, and neurology. 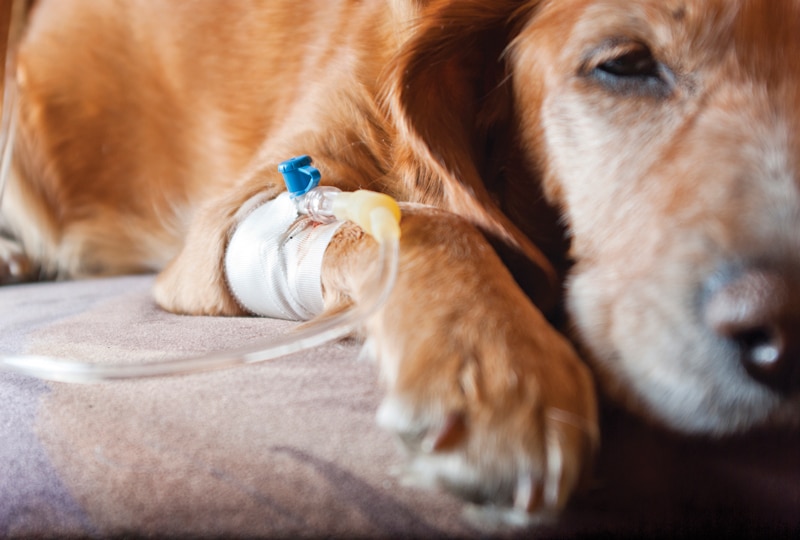 Leptospirosis has been described as a re-emerging disease in both dogs and humans.1,2

Whether or not a true increase in the incidence of canine leptospirosis (Figure 1) has occurred over the past 2 decades is unclear. Increased awareness and vigilance, partly spurred by educational campaigns, have likely increased the number of diagnosed cases. Still, several studies have suggested a temporal trend that is consistent with a re-emergence of leptospirosis.3 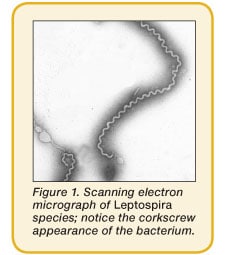 In either case, leptospirosis should be recognized as a significant infectious disease in dogs, with variable incidence that is dependent on unpredictable short- and long-term weather patterns and influenced by anthropogenic factors that may affect exposure of dogs to wildlife vectors.

Serogroup prevalence more likely reflects geographic influences on the sampled population. It is important to emphasize that serogroup Icterohemorrhagiae appears to be the most common cause of leptospirosis in dogs and humans in certain cities, such as Baltimore, Detroit, New York City, and St. Louis, where the Norway rat remains the predominant vector. In most other parts of the United States, serogroup Grippotyphosa and, to a lesser extent, serogroup Pomona predominate.7-9

Understanding risk factors that affect the incidence of leptospirosis in any region helps increase a veterinarian’s index of suspicion with regard to canine patients that present with clinical signs and laboratory analysis consistent with leptospirosis.

A number of recent studies have used geospatial analysis of various hydrographic and land cover features to better define these risk factors. When interpreting the findings of these studies, awareness of the pitfalls associated with them is crucial; however, a few common themes have emerged:

The most common syndrome associated with canine leptospirosis is acute kidney injury (Figures 2 through 4), which can manifest clinically as:

In these dogs, azotemia can vary in severity and is usually dependent on the time between onset of clinical signs and presentation to the veterinarian for diagnosis and care.14

Leptospirosis was identified as the most common cause of acute kidney injury in a recent study, accounting for 31% (56/182) of all cases and 54% (98/182) when known causes (ethylene glycol, nonsteroidal anti-inflammatory drugs, and hemodynamic causes) were excluded.16

The suspicion of leptospirosis is increased in dogs with acute kidney injury that have concurrent evidence of acute hepatocellular injury or cholestatic liver disease, which may manifest as increased serum alkaline phosphatase, with or without hyperbilirubinemia.

When hepatitis occurs without acute kidney injury, elevations in serum alanine transaminase and serum alkaline phosphatase occur with variable severity, along with hyperbilirubinemia.

Uveitis has been recognized as a concurrent finding in some dogs with either acute kidney injury or hepatitis, although it may be subtle and, therefore, undiagnosed in some cases.17 Likewise, intussusceptions as a result of severe enteritis (Figure 5) have been reported as a rare concurrent condition in dogs with acute kidney injury.18

Polyuria and polydipsia (PU/PD) in the absence of any routine laboratory abnormalities (other than hyposthenuria) is the second most common syndrome seen at my institution.19 While these dogs appear outwardly healthy, they exhibit profound PU/PD. Many have a history of brief fever and lethargy that is self-limiting up to 2 weeks prior to onset of PU/PD; an event that can be easily overlooked.

The absence of active urine sediment (or negative urine culture).
Testing for leptospirosis should be performed prior to evaluation for central diabetes insipidus or psychogenic PD.

Recently, concern has been raised about the emergence of pulmonary hemorrhagic syndrome, which is seen in humans.20,21 Reports of pulmonary hemorrhage in dogs with leptospirosis (Figure 6) can be found throughout the literature, but it is unclear whether it is truly emerging as a syndrome of significant incidence. 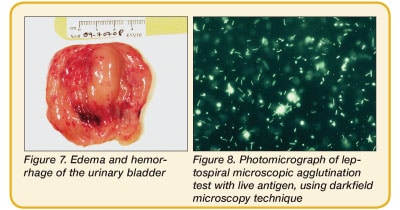 Confirming a diagnosis of leptospirosis is limited to 2 noninvasive tests, based on high sensitivity and specificity, reasonable cost, and speed of turn-around:

The MAT has long been the standard for leptospirosis diagnosis and is available through most commercial, state, and veterinary college diagnostic laboratories.

Results of the MAT have been used to suggest the epidemiologic prevalence of certain serogroups.

PCR has been shown to have good sensitivity and specificity in the diagnosis of leptospirosis.19,23

A recent study evaluated the seropositivity of dog owners and veterinary staff that were in contact with dogs with clinical leptospirosis. The results showed that none of the people seroconverted, suggesting that the risk of zoonotic transmission from dogs is low.1

Determining Source. However, there are a number of well-documented cases of humans contracting leptospirosis from dogs. In fact, the asymptomatic carrier may pose a more significant risk to humans as individuals may not take the same precautions (ie, wearing gloves, judicious hand washing) as when handling a dog showing clinical signs of leptospirosis. It should also be noted that humans and dogs may become infected from the same source, resulting in the incorrect assumption that the dog was the source of infection.

Assessing Disease Course. Although most infections in humans are symptomless, when clinical, the most common presentation is acute, febrile illness that mimics influenza, with fever, chills, headache, nausea, and myalgia. Illness may be followed by resolution, transient improvement with relapse, or progressive disease.

Those with progressive disease may develop recurrent fever, aseptic meningitis, jaundice, renal failure, or uveitis. A smaller percent of cases may develop fulminant disease, which may include hepatic and renal disease (Weil’s syndrome), hemorrhagic pulmonary syndrome, or septic shock.

There are 2 main therapeutic components for leptospirosis in dogs:

Antimicrobial Therapy
A number of antimicrobials have been demonstrated to be effective in killing leptospires, at least through in vitro studies. However, the most frequently recommended antibiotics for dogs with leptospirosis are ampicillin and doxycycline.

Supportive care for dogs with acute kidney injury is focused on adequate fluid therapy.
Most dogs with acute kidney injury have polyuric renal failure. Adequate fluid therapy can be ensured by establishing an acceptable weight range following rehydration; then weighing the dog every 4 to 6 hours to monitor for marked deviation from this target weight.

For patients that are oliguric, the placement of a urinary catheter and closed collection system may be necessary for accurate measurement of urine production. A central venous catheter may also be necessary to ensure that overhydration does not occur.

Additional management strategies, such as use of diuretics in oliguric dogs and guidelines for anti-emetics and gastroprotectants, can be found in reference textbooks.

Referral to a center that can perform hemodialysis or peritoneal dialysis is recommended for dogs that:

The veterinarian has to evaluate a number of factors when deciding whether to offer leptospirosis vaccination to their clients:

Necessity is driven by the incidence of disease in a particular geographic area, but that information is often not readily available. Veterinarians need to be aware of the ubiquitous nature of leptospirosis, usually endemic in rodent and raccoon populations, and consider the risk factors in their locale.

All evidence supports that vaccination is effective in preventing clinical disease and renal shedding in dogs. Safety can be a concern, especially in small dogs if multiple vaccines are co-administered, although adverse reactions are uncommon. I recommend administering the leptospirosis vaccine as a stand-alone vaccine, at a time independent of other vaccines.

Figures 4 and 7 are from a 3-month-old, intact female bichon frise with acute renal failure and cholestasis from leptospirosis (urine PCR, positive; acute serum titers, negative). Platelet count in this dog was within the reference range on presentation.