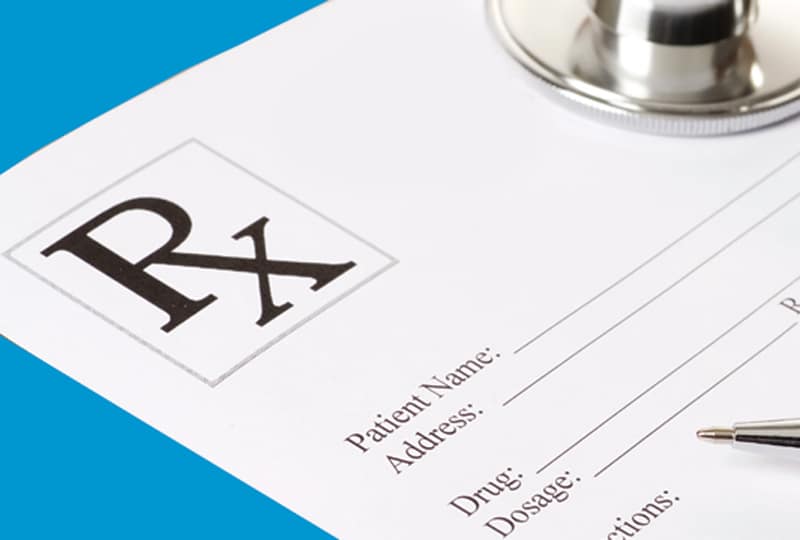 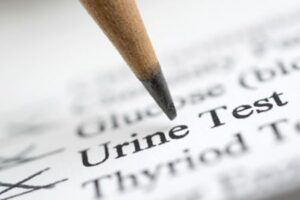 This study assessed whether urine protein:creatinine ratios (UPCRs) determined from urine samples obtained by cystocentesis versus free catch provided similar results. Paired urine samples (230) were collected from 115 client-owned dogs. Samples with evidence of active inflammation (microscopic hematuria, pyuria, and/or bacteriuria) were excluded from further evaluation (n = 34). The correlation between UPCR in 81 samples collected by the 2 methods was strong (r2 = 0.90); of 81 dogs, 75 (92.6%) had UPCRs from both samples that fell into the same proteinuria category (normal = UPCR < 0.2; borderline = UPCR between 0.2 – 0.5; abnormal = UPCR > 0.5). The high reliability of the UPCR from free-catch urine, along with the ease of collection, should increase the use of this quantitative assessment of proteinuria. It is important to remember, however, that lower urinary tract inflammation (LUTI) may affect UPCR test results and that LUTI is more likely to be observed in free-catch versus cystocentesis urine samples.

This study, published by a group of veterinarians in a human genetics journal, reported on a mutation in boxer dogs with arrhythmogenic right ventricular cardiomyopathy (ARVC). ARVC, formerly called boxer cardiomyopathy, is a leading cause of ventricular arrhythmias, fainting, heart failure, and sudden death in this breed. The identified mutation involves the gene that encodes striatin, an important component of heart muscle cells. This breakthrough study is the first to identify a gene abnormality for this particular disease. Based on the results of this work, a genetic test for this mutation in boxer dogs is now available though the Veterinary Cardiac Genetics Laboratory at North Carolina State University College of Veterinary Medicine. For further information on this test, visit cvm.ncsu.edu/vhc/csds/vcgl/boxer-arvc.html. I recommend testing young boxer dogs prior to breeding as well as older boxer dogs with clinical signs of possible ARVC (arrhythmias, fainting, heart failure). 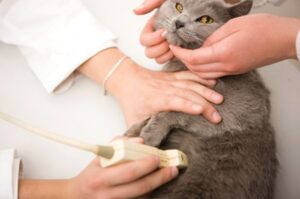 Previous ultrasound studies have highlighted the importance of the finding of intestinal layering loss in diagnosing focal intestinal neoplasia. However, diagnosis of diffuse infiltrative neoplasia remains a challenge, with surgical biopsies being the gold standard. In this recent study, 142 cats with (1) full-thickness gastrointestinal biopsies and (2) abdominal ultrasound with no mass noted were retrospectively evaluated to correlate ultrasound findings with underlying disease processes. Thickening of the muscularispropria layer was significantly correlated with lymphoma (30/62 cats with lymphoma) compared to 7/56 normal cats and 1/24 with inflammatory bowel disease (IBD). Additionally, while mesenteric lymphadenopathy was associated with both lymphoma and IBD, thickened muscularis with mesenteric lymphadenopathy was strongly correlated with lymphoma; -+ of cats with lymphoma had these findings compared to only 1 each of normal and IBD cats. No longer is the lack of layering loss most consistent with IBD; an intestine with normal layering but thickened muscularis layer, especially with concurrent lymphadenopathy, has now been shown to be more often associated with neoplasia than IBD. While these findings do not provide a definitive diagnosis, they allow for honest discussions with pet owners on likely differentials and further testing or therapies based on this information. 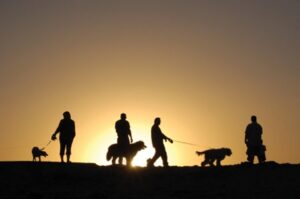 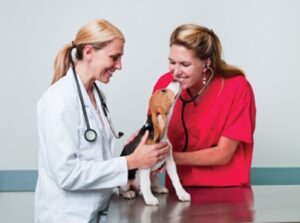 The Care and Feeding of High-Potential Employees

A 2010 Corporate Leadership Council survey found that more than 25% of high-potential employees in U.S. businesses are planning to change jobs within the next 12 months. This is a troubling number for the employers surveyed, who identify their best employees by performance, responsibility, and fit with the job, but said their organizations are ineffective at managing and retaining those same employees.

It is more than paychecks, benefits, and opportunities that drive top talent to stay with or leave an organization. This study identified 14 different methods of retention (see The Top 14 Strategies to Retain High-Potential Employees), which begins the first day of employment by indicating to the new employee that he/she is integral to the business and then including the employee in the planning process for his/her development within the organization. Meshing high-potential employees with mentors will provide leadership and support as the employee finds a place within the business culture where he/she can thrive. 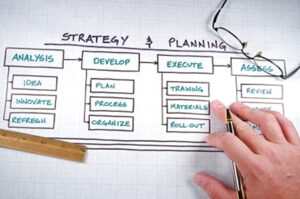 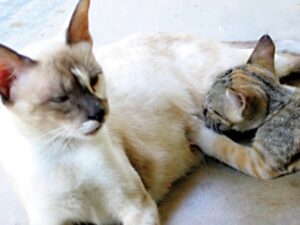 Questionnaire-Based Survey of Parturition in the Queen

For this study, 197 questionnaires were sent to breeders of purebred cats. The questionnaires collected data on parameters associated with parturition progress and the completed survey represented 29 breeds. Parturition parameters evaluated included age and parity of the queen, gestation length, overall parturition length, time between expulsion of kittens for a given queen, presentation, and litter size.
Median gestation length, calculated from day of first breeding to queening, was 65.3 +/- 2.2 days, with a range of 57 to 72 days. This correlated with results from other studies. Length of gestation varied with litter size; smaller litters were carried longer. Median time between kitten births was 30 min, with 97% born with no interval longer than 100 min. Median litter size was 4 kittens and did vary somewhat by breed, with cobby-type queens having slightly larger litters than oriental-type queens. Mean birth weight decreased as litter size increased. Thirty-one percent of kittens were born in a posterior presentation. 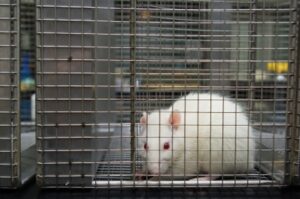 Pituitary adenomas are common neoplasms in older rats; prevalence in certain strains of laboratory rats older than 2 years is over 80%. In most cases, pituitary adenomas are prolactin-producing. Clinical signs vary and include central vestibular disease, proprioceptive defecits, ataxia, stumbling, and visual deficits.

In this report, a 2-year-old rat was presented for apparent blindness and behavioral change. Magnetic resonance imaging (MRI) revealed a large mass present in the region of the pituitary gland. Treatment was initiated with cabergoline, 0.6 mg/kg PO Q 72 H, which was obtained from a compounding pharmacist. Cabergoline is a dopamine-receptor agonist used to treat prolactinomas in humans; it has been demonstrated to decrease prolactin secretion and prolactinoma growth in rats with pituitary adenomas.
Improvement in clinical signs was seen within 3 days, and repeat MRI revealed the tumor had been reduced to 41% of its original volume. Clinical signs resolved completely until the rat’s condition worsened 8.5 months post initiation of treatment. MRI demonstrated an increase in tumor volume of 61% compared with tumor size in the second MRI study. Euthanasia, necropsy, and histopathology confirmed pituitary adenoma. 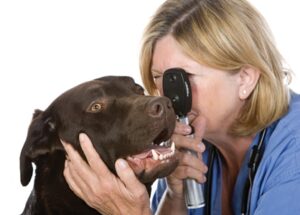 This article from the Technical University of Lisbon (Portugal) veterinary teaching hospital evaluated 60 canine patients with atopy to determine how many patients exhibited ocular signs of allergy along with their systemic atopy signs. In addition, conjunctival provocation tests (CPTs) (as are beginning to be performed in human allergy patients) were performed to determine whether administration of 2 types of dust mite allergens triggers ocular signs of allergy. The most common finding was that periocular and ocular signs of allergy were present in 60% of cases with conjunctival hyperemia (90%). There was a significant difference in CPT response between test and control groups. The conclusion was that many canine patients with atopy that present to a dermatologist would benefit from a complete ophthalmic examination. 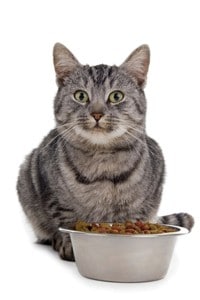 Fourteen cats with hyperthyroidism (confirmed by serum total thyroxine [TT4]; reference range, > 10-55 nmol/L) were divided into 2 groups. Group 1 was fed an iodine-reduced dry food (0.17 ppm iodine) and group 2 was fed a commercial dry food (1.9 ppm iodine). After 6 weeks, group 2 was switched to a second iodine-reduced dry food (0.32 ppm iodine), while group 1 remained on the original iodine-reduced food. All cats had free access to their food and deionized water. TT4 was assessed initially; at baseline; and during weeks 3, 6, and 12. Group 1 cats had become euthyroid at baseline and maintained euthyroidism throughout the 12-week study; group 2 cats became euthyroid 3 weeks after food change and remained euthyroid throughout the rest of the study (baseline on commercial food, TT4 = 72 + 12 nmol/L, versus 43 + 9 and 40 + 6 after 3 and 12 weeks on the second iodine (0.32 ppm) food, respectively). These results suggest that dietary iodine at or below 0.32 ppm is an effective treatment for cats with naturally occurring hyperthyroidism.

This study compared the hemodynamic effects of anesthesia using injectable versus inhalational methods in cats during blood donation. The injectable protocol used IM ketamine, midazolam, and butorphanol; the inhalational protocol used sevoflurane in oxygen. It was noted that both protocols demonstrated potential for severe hypotension; 84% of cats using inhalational anesthetic and 42% of those using injectable anesthetics experienced hypotension during the donation process. The injectable anesthetic protocol was associated with hyperthermia and a slower return to normal behavior compared with cats that received inhaled anesthetic. The authors recommended that feline blood donors should be monitored for hypotension with fluid support available if needed during anesthetized blood donations.