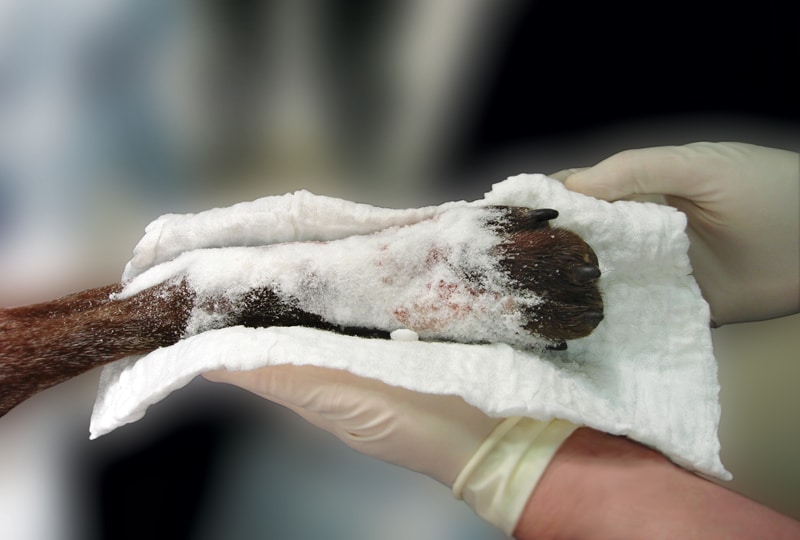 Traumatic wounds are frequently encountered by the small animal practitioner The inciting cause and severity of the wound dictate the duration of treatment, required materials/equipment, and labor intensity. Despite the availability of cutting-edge antibiotics, age and underlying disease or concurrent illness may contraindicate administration.

Many “old-school” remedies are re-emerging and have shown to be beneficial in wound treatment, including wounds that are complicated, nonhealing, and/or infected. These topical treatments kill bacteria using pH and osmolarity, avoiding induction of bacterial resistance.

Since each wound and patient is unique, there is no one set of rules regarding therapy. In addition, wounds change during the healing process, so a therapy used in the initial stages may delay healing if used too long. Proper research and knowledge of topical therapies is vital to correct usage and successful treatment.

Prior to application of topical treatments, the wound bed must be properly prepared:

1. Protect the wound with a water-soluble sterile lubricant.

2. Clip and clean the surrounding skin to prevent further contamination.

3. Lavage the wound bed under 7 to 8 psi of pressure¹ with sterile 0.9% saline or, preferably, a buffered sterile solution that is isotonic, such as lactated Ringer’s solution.

4. After wound lavage, dry the area around the wound with sterile gauze. Depending on the topical therapy, the wound bed may also need to be dried. However, care should be taken not to disturb newly formed granulation tissue or delicate epithelial tissue.

All of the topical therapies discussed in this article are indicated for full thickness wounds without granulation tissue or those with superficial infections. Many of the therapies are bacteriocidal and promote granulation. See the Table for indications for specific therapies.

Seven to 8 psi of lavage pressure can diminish wound bacteria by greater than 75%.1

For centuries granulated sugar has been used to treat wounds, such as mechanical injuries, ulcers, and burns. Sugar is a desirable treatment because it:2

Sugar has high osmolality, which draws water and nutrient-rich lymph into the wound, nourishing the regenerating tissues. In addition, the high osmotic stress caused by sugar on bacteria interferes with cell signaling and cell wall permeability, leading to bacterial death. Bacterial cells are affected by osmostic stress because they rapidly divide, which makes them more susceptible to metabolic attacks. Sugar also attracts macrophages and forms a protective layer of protein by accelerating sloughing of devitalized tissue and allowing a granulation bed to form. This protein layer is created from inflammatory cells and sloughing dead cells.

Potential disadvantages of sugar bandages include: 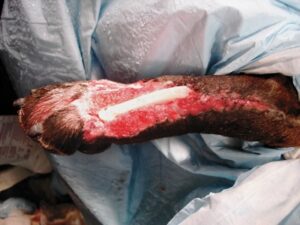 Figure 1. Initial presentation of a degloving and crushing injury of the dorsal metatarsus infected with Pseudomonas. 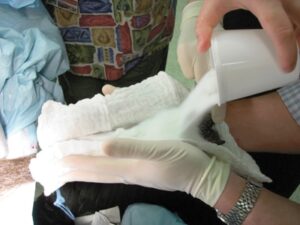 Figure 2. After cleaning the wound, a thick layer of granulated sugar was poured over the entire wound. 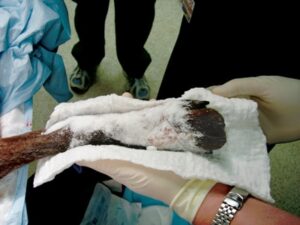 Figure 3. Large sterile cotton gauze was used to hold the sugar on the distal wound.1 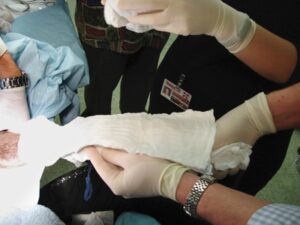 Figure 4. The wound was wrapped to ensure the sugar stayed in place and covered the entire wound. The primary layer must be sterile and very absorptive. 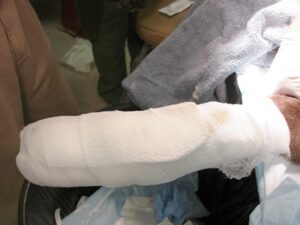 Figure 5. The secondary layer should bulk the bandage to prevent strikethrough. An aluminum rod was incorporated in this layer to support the hock, which was unstable. 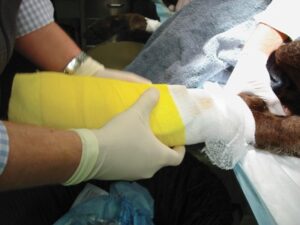 Figure 6. A tertiary layer was applied to hold and protect the bandage. This layer must not be too tight. 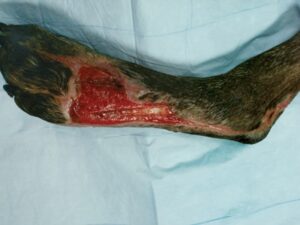 Figure 7. Preoperative picture of the metatarsal injury illustrating granulation, epithelialization, and lack of infection. This wound was successfully closed with a mesh graft.

Historical documentation suggests Egyptians used honey as a topical wound treatment for over 4000 years. Not until the past decade has interest in honey as an adjunct to wound therapy accelerated in medical practice. Honey has antibacterial activity and enhances both granulation and epithelialization of wounds.

The antibacterial effects of honey can be attributed to its high osmolarity, acidity, and peroxide activity.3,4,5

Research suggests that honey’s ability to enhance wound healing is related to release of inflammatory cytokines from surrounding tissue and attraction of macrophages to further cleanse the wound.6,7 Honey also appears to:

Disadvantages of using honey on topical wounds include:

Bacteria and fungi successfully treated by these types of honey include:

Some studies have used store-bought honey but research favors unpasteurized honey from the places mentioned above. Honey is not created equal and antibacterial activity can vary as much as 100-fold.9 While any unpasteurized honey is effective for wound treatment, the antibacterial activity of different honeys can be compared by adding each one to milk and quantifying how long it takes the milk to sour.3 Although unsterile honey may contain Clostridia spores, no problems have been reported to date.

Vinegar (acetic acid) has been used to fight infections since 300 BC.10 Despite its antimicrobial properties, its use in wound treatment is controversial.

Nontoxic concentrations (< 0.0025%) are slightly effective as an antibacterial agent against gram positive and negative bacteria, such as S aureus and P aeruginosa.10,11 At this concentration, vinegar has no detrimental effects on fibroblasts and keratinocytes; however, it’s ineffective against E coli, Bacteroides fragilis, and Enterococcus. Studies have shown that diluted vinegar (2% acetic acid) is effective for treating ear infections, but the low pH may irritate inflamed skin.10

Common canine and feline ear cleansers containing acetic acid are frequently used. However, their concentrations may vary, which affects efficacy. They also lack broad-spectrum efficacy and have a narrow safety margin compared to commonly used solutions, such as chlorhexidine and povidone iodine.8 However, chlorhexidine can be irritating and povidone iodine is inactive in organic material and can cause sensitivity/allergy issues in some patients, providing a place for both acetic acid and Dakin’s solution (see below) in wound therapy.

Similar to vinegar, disadvantages of Dakin’s solution are its limited spectrum of efficacy and narrow safety margin when compared to chlorhexidine and povidone iodine.8

Throw away any unused portion 48 hours after opening. Unopened jars can be stored at room temperature for 1 month after preparation.14

In the early 1800s, it was accidentally discovered that maggots prevented infection and accelerated wound healing in soldiers with battle injuries. They were intentionally introduced into wound management shortly after; however, it wasn’t until recent years that their popularity increased in human medicine due to increasing antimicrobial resistance.11,15

Although little is known about specific advantages and disadvantages of maggots in veterinary wound management, information is extrapolated from human reports/research. In addition, experienced practitioners report that maggot therapy is beneficial and safe.16

Cost of treatment varies based on the individual wound. In a human study of necrotic venous ulcers, the average cost of maggot therapy was approximately half the cost of conventional treatment and required fewer applications to achieve the same end result.15

According to practitioners, the most common disadvantage of maggot therapy is that it may take 24 to 48 hours to receive maggots. In addition, application takes longer because the dressing must withstand any efforts the patient may make to remove it.15 Human patients undergoing maggot wound debridement frequently complain about discomfort or pain associated with movement of maggots within the wound.15

Preventing Transmission of Bacteria Within the Hospital

To avoid spreading wound bacteria, gloves, hats, face shields, and/or gowns should be worn during wound lavage. In addition, all bandage material removed from the patient should be placed in a biohazard receptacle.

Using unique, and what may be considered “old school,” remedies for treating wounds that are infected or nonhealing may be the ideal option for companion animal patients. As long as current research supports a modality, clinicians should not be afraid to use it when indicated. Topical old-school agents are not susceptible to bacterial resistance and offer practical, low-cost alternatives to more expensive and potentially toxic antibiotics. n

Kristen O’Connell is a third-year veterinary student at Mississippi State University. After receiving her DVM, she plans to specialize in small animal surgery.

Jennifer L. Wardlaw, DVM, MS, Diplomate ACVS, is an assistant professor of small animal surgery in the Department of Clinical Sciences at the Mississippi State University College of Veterinary Medicine. Her interests include arthritis, reconstructive surgery, wounds, nutraceuticals, and developmental orthopedic diseases. Dr. Wardlaw has spoken at numerous national meetings as well as published various research articles and book chapters. She received her DVM from University of Missouri and completed her internship, residency, and MS at Mississippi State University.