Head tilt in dogs is a clinical presentation that most veterinarians encounter frequently in practice, most often due to dysfunction of the vestibular system.

Head tilt in dogs (FIGURE 1) is a clinical presentation that most veterinarians encounter frequently in practice. When a patient presents for evaluation of a head tilt, it can sometimes be challenging to know the best course of diagnostics to recommend and whether or what primary treatment is warranted. Differentiation of the varied clinical presentations of vestibular disease and how they relate to the generation of a list of differential diagnoses can be extremely helpful in providing appropriate primary care and being able to better predict possible outcomes. 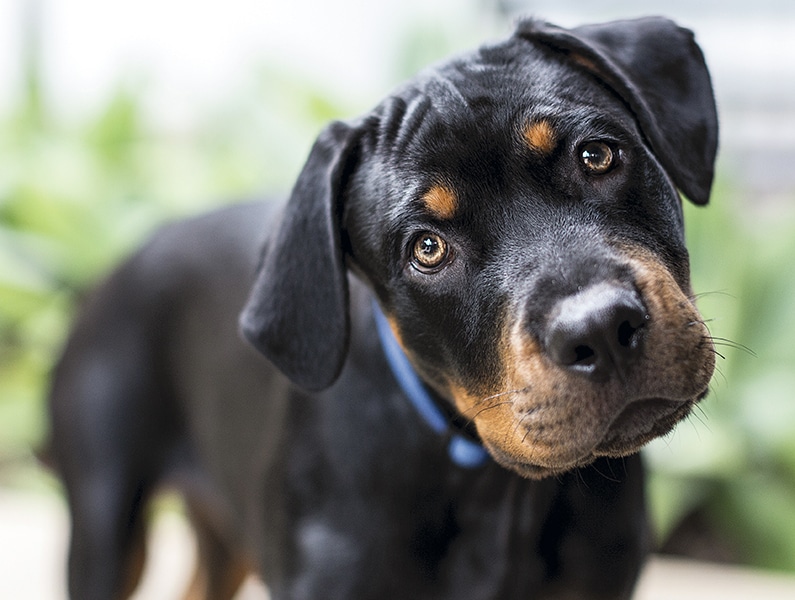 The primary reason for a dog to exhibit a head tilt is dysfunction of the vestibular system. The vestibular apparatus is responsible for an animal’s maintenance of balance and the spatial orientation of the eyes, head, trunk and limbs relative to gravity. From a clinical perspective, it is divided into two components: peripheral, which involves the vestibulocochlear nerve (cranial nerve VIII) and its receptor in the inner ear; and central, which involves the brainstem and sometimes the cerebellum.

The receptor organ of the vestibular system is located within the petrous temporal bone in the inner ear and consists of the saccule, utricule and crista ampularis within the semicircular canal (FIGURE 2). Through movement of the hair cells bathed in endolymph, the position and movement of the animal as it relates to gravity is detected and then transmitted by cranial nerve VIII (vestibulocochlear nerve) to the vestibular nuclei in the brainstem.1 The vestibular nuclei function to provide output to many other areas of the brain which result in:2 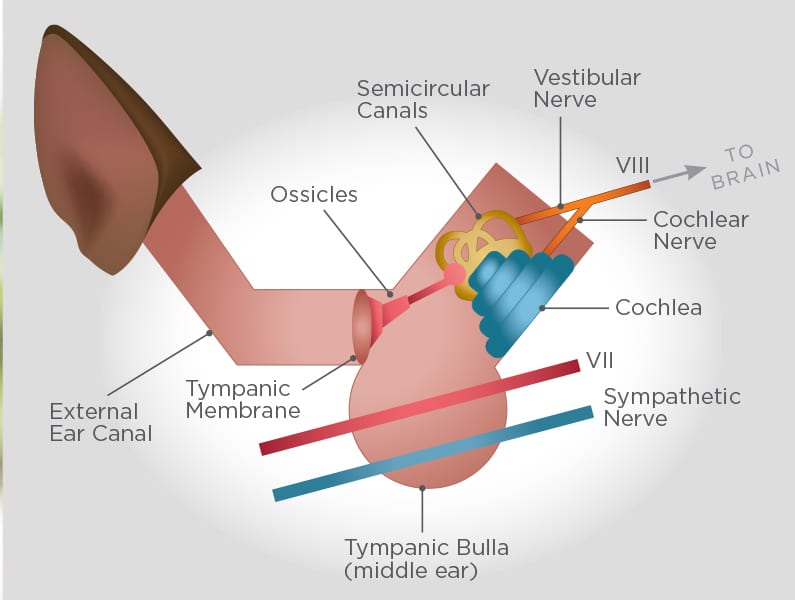 FIGURE 2. Anatomy of the canine external, middle and inner ear. 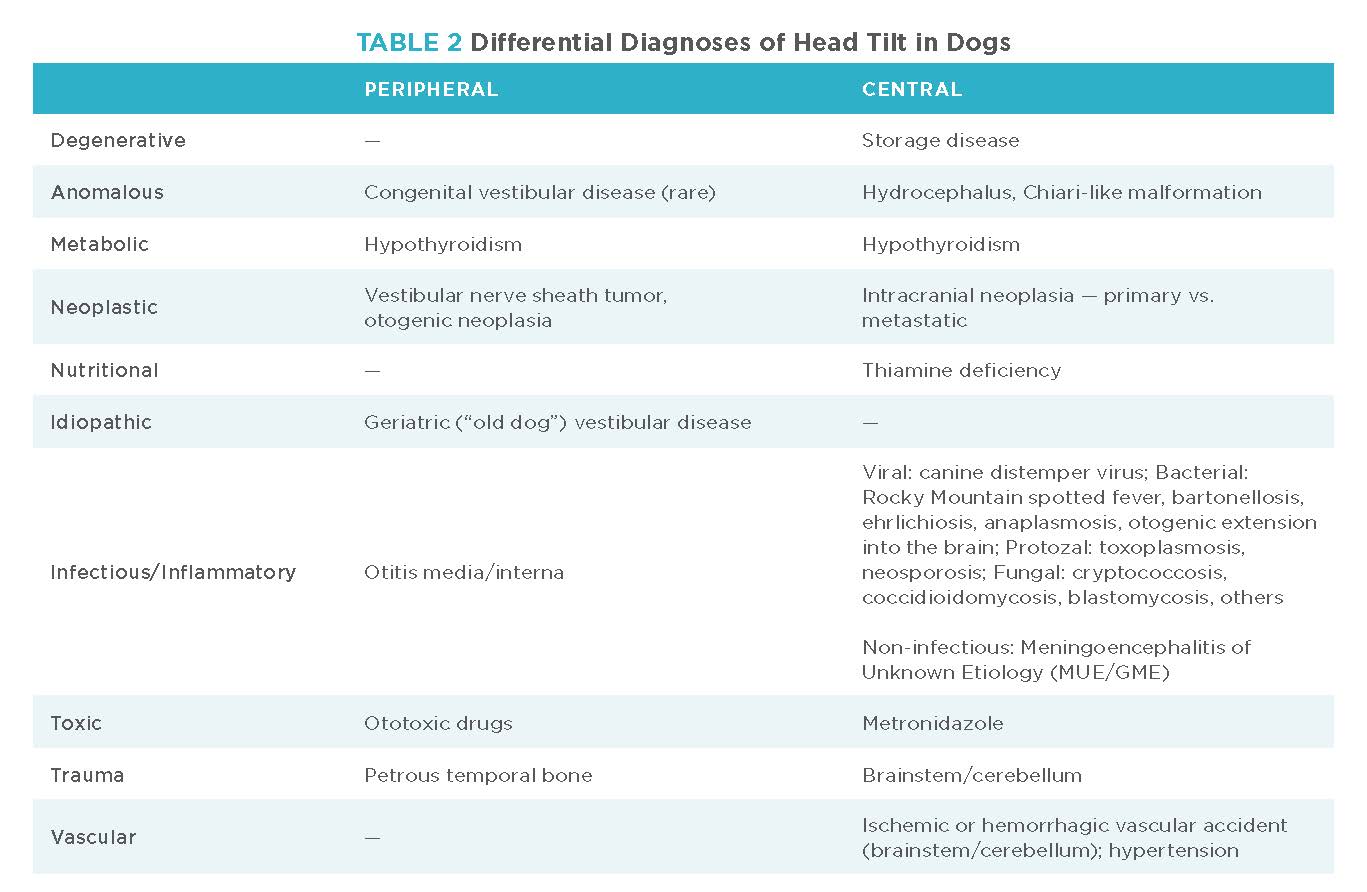 Of the peripheral vestibular diseases, otitis media/interna (OMI) is the most common diagnosis.4,5 Though all breeds can be affected, in one study, the most commonly affected breeds were French bulldogs, cavalier King Charles spaniels, cocker spaniels and West Highland white terriers.5 Diagnosis is based on otoscopic examination, imaging (CT or MRI is preferred4,5) and culture via myringotomy. It is important to note that an intact tympanic membrane does not rule out OMI; in fact, infection most commonly results from (1) a descending infection from otitis externa, (2) hematogenous spread of microorganisms or (3) extension of microorganisms from the pharynx via the auditory tube. A very common clinical presentation of OMI is vestibular disease with concurrent cranial nerve VII dysfunction and/or Horner’s syndrome (FIGURE 3), due to the coursing of these pathways through the middle ear (FIGURE 2). Treatment is antibiotic therapy, ideally based on culture and sensitivity, and supportive care. An uncommon but severe progression of OMI is intracranial infection resulting from central extension of bacteria into the brainstem (FIGURE 4). Recognition and prompt treatment of this complication can result in a good prognosis for recovery.6 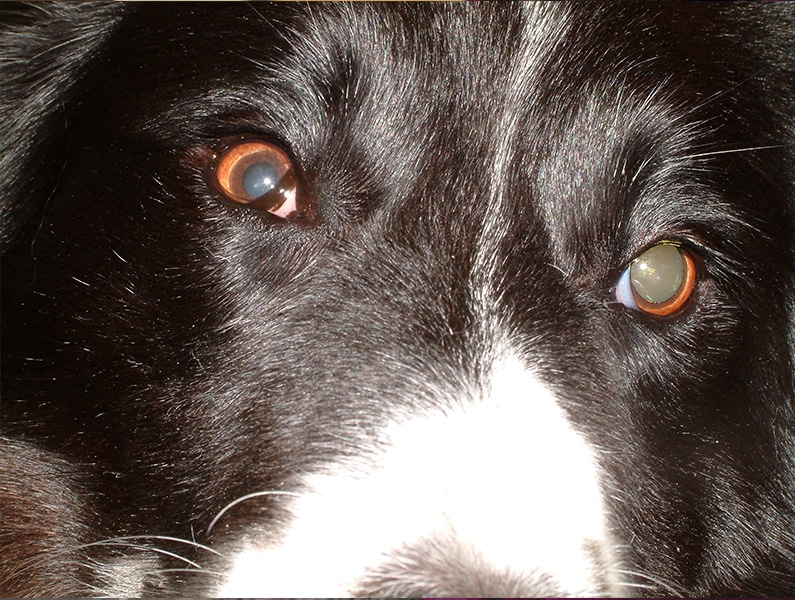 FIGURE 3. Photograph of canine Horner’s syndrome in the right eye. Note the elevated third eyelid, miosis and mild ptosis. Enophthalmos, which is often present, is not appreciated in this photograph. 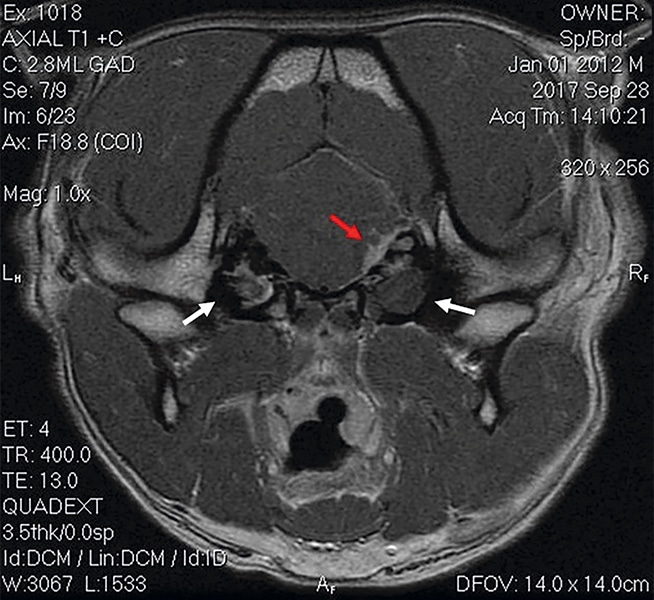 FIGURE 4. Post-contrast axial image of the canine brain at the level of the caudal brainstem. Note the contrast enhancement of the right lateral aspect of the medulla (red arrow). The tympanic bullae (white arrows) show isointense signal and heterogenous contrast enhancement depicting a soft-tissue/high protein type infiltrate in the normally air-filled bullae.

Hypothyroidism has been implicated as a cause for both peripheral and central vestibular disease in dogs. The pathogenesis of hypothyroid-associated vestibular disease has been described as a component of polyneuropathy or as myxedematous disease causing nerve compression (cranial nerve VIII and sometimes cranial nerve VII) as they exit the skull through the internal acoustic meatus.2,9 Accordingly, patients that present with cranial nerve VII and VIII dysfunction should have their thyroid function evaluated. Thyroid hormone supplementation typically results in improvement within a few months.

Peripheral vestibular signs may develop if the ear has been flushed with any routine cleaning solution if the tympanum is ruptured. Many drugs/agents are potentially ototoxic; dogs may develop signs of peripheral vestibular disease or deafness. Clinical signs of vestibular disease may develop rapidly (as soon as 10 minutes). Within 3 days to 3 weeks, central compensation results in gradual improvement of clinical signs; the compensation is maximal after about 3 months. The head tilt, however, may still be obvious and permanent.

Chlorhexidine solutions can significantly contribute to ototoxicity and should be avoided if the status of the tympanum is unknown. Aminoglycoside antibiotics (parenteral or topical) can affect the hair cells, flocculonodular lobe and fastigial nucleus; streptomycin tends to have vestibular effects, whereas neomycin, gentamycin, kanamycin, and vancomycin tend to have more effect on the auditory system. In addition, loop diuretics, cisplatin and propylene glycol have also been implicated as potentially ototoxic.

MUE encompasses several presumed idiopathic noninfectious inflammatory diseases in dogs; other terms that fall into this grouping include: granulomatous meningoencephalomyelitis, necrotizing meningoencephalitis and necrotizing leukoencephalitis. MUE should be considered in patients that are suspected to have central vestibular disease with a multifocal intracranial localization; for example, vertigo with seizure activity, multiple cranial nerve deficits and/or concurrent spinal cord dysfunction or pain. Female, small breed dogs 4 to 8 years of age are predisposed, and diagnosis is based on MRI and, cerebrospinal fluid analysis, with or without infectious disease testing. Treatment involves immune suppression with glucocorticoids plus a chemotherapy drug (cytarabine arabinoside, procarbazine) or immunomodulating drug (cyclosporine, leflunomide). Aggressive long-term treatment is necessary, and the prognosis is guarded.10

Head tilt is the second most common clinical sign in dogs with cerebellar vascular infarcts.12 A cerebrovascular accident (CVA) should be considered high on the differential list in patients that have acute onset, focal and nonprogressive central or paradoxical vestibular signs. Cerebrovascular disease can initially present as a transient ischemic attack (TIA), which is defined as a temporary, focal brain deficit secondary to vascular disease that completely resolves in <24 hours. In a recent study, 22% of the dogs investigated had episodes consistent with a TIA prior to a CVA or stroke.12 Diagnosis of cerebrovascular disease is based on history, clinical signs and MRI of the brain; most CVAs are easily recognized on MRI; however many cases of TIA are undectable even with high field MRI.13 Following diagnosis of a CVA or suspicion of TIA, an investigation for the underlying cause should ensue. In one study of 33 dogs with brain infarcts, 18 cases had the following comorbidities identified: hypertension (29%), chronic kidney disease (24%), hyperadrenocorticism (18%) and single cases of aortic stenosis, diabetes mellitus, hemangiosarcoma and pheochromocytoma.14 Treatment for stroke patients is supportive and many patients (approximately two-thirds) will recover with time; risk of recurrence is significantly higher in those patients in which a predisposing medical condition is identified.14

Metronidazole administration can cause central vestibular or cerebellar dysfunction in dogs, typically following chronic administration of doses that exceed 60 mg/kg q24h. Diagnosis is based on history and clinical signs. Treatment includes cessation of metronidazole therapy and supportive care. It has been shown that diazepam administration (0.5 mg/kg PO q8h for 3 days) significantly reduces recovery time in affected dogs.11

The diagnostic plan, treatment and prognosis can vary to a large extent based on whether the patient has peripheral or central vestibular disease. A careful history should be taken, including rate and duration of onset, whether the signs have progressed since onset, medications administered, diet, travel history, and existence of any other comorbidities. Physical exam should include a complete otoscopic exam and complete neurological examination to determine if the patient localizes to peripheral or central disease. A minimum database, including complete blood count, serum chemistry, blood pressure and thoracic with or without bullae radiographs, are recommended. If systemic infectious disease is suspected, serum titers or polymerase chain reaction for likely organisms (TABLE 2) can be performed. In patients where peripheral vestibular disease is suspected, additional diagnostic considerations may include myringotomy with culture and sensitivity and a complete thyroid panel (thyroxine, free T4 and thyroid-stimulating hormone) based on clinical suspicion. For patients that localize to central vestibular disease or those that are not improving with initial therapy, advanced imaging (ideally MRI) of the head and possible cerebrospinal fluid analysis are highly recommended.

Symptomatic treatment is often beneficial as many patients that have vestibular disease experience varied degrees of severity of clinical signs including nausea, anorexia, anxiety, recumbency, circling, falling and rolling. For dogs that are mildly affected, meclizine, an antiemetic and antivertigo drug, is indicated. Other antiemetics such as maropitant, ondansetron or chlorpromazine can also be considered. Patients more severely affected will benefit from parenteral fluid therapy and intensive nursing care in an inpatient setting. During periods of severe vertigo (i.e., continuous rolling), these patients should be sedated to the point of relaxation; I prefer intermittent dosing or constant rate infusion of dexmedetomidine at a low initial starting dose (62.5 mcg/m2 IV). In addition, these patients need to be situated in as much of a “normal” posture as possible while still rotating the patient every 4 to 6 hours. Following the acute phase of vertigo, physical rehabilitation appears to aid in the recovery of ambulation and is recommended.

Head tilt in dogs is generally mediated through dysfunction of the vestibular or cerebellovestibular system. Careful attention to history, progression of disease and a complete neurological examination, especially postural reaction testing and a cranial nerve examination, is paramount. Localization of whether the vestibular disease is of peripheral or central origin is essential to the accurate formation of a differential diagnoses for the patient. The underlying cause may be simple or more complex, with peripheral disorders typically carrying a better overall prognosis.