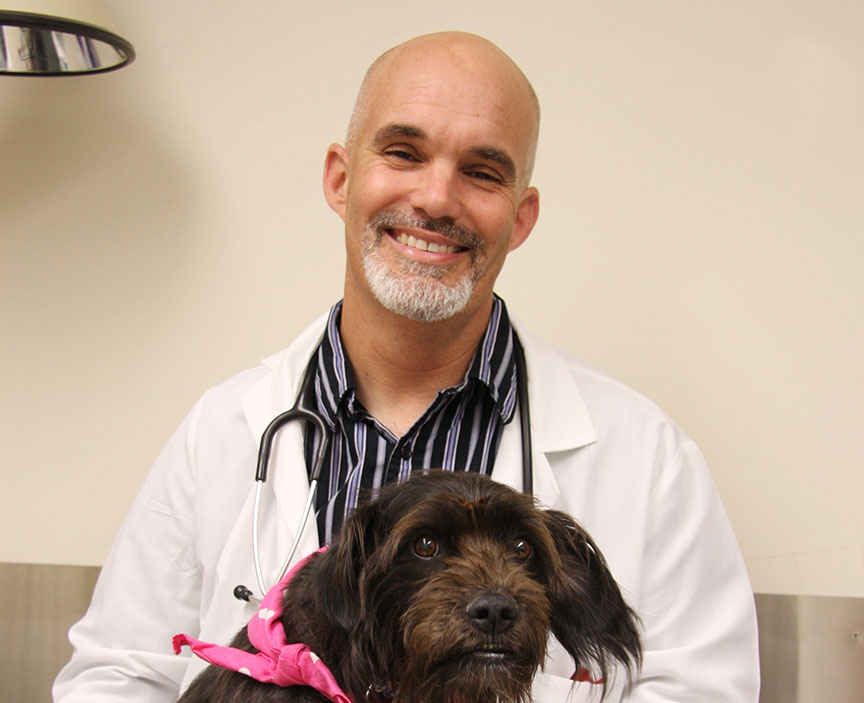 Dr. Bryan, who led a research team in developing a vaccine treatment for osteosarcoma in dogs, with his puppy. Photo Credit: Courtesy University of Missouri

Veterinary oncologists at the University of Missouri have developed a vaccine treatment for osteosarcoma — a common type of bone cancer in dogs — which allows oncologists to avoid chemotherapy. It also shows promise for being used in human clinical trials.

By creating a vaccine from a dog’s own tumor, scientists at the University of Missouri have helped develop a patient-specific, “precision medicine” treatment for bone cancer in dogs. The scientists were able to target specific cancer cells and avoid the toxic side effects of chemotherapy.

Osteosarcoma, or bone cancer, is not common in humans, representing only about 800 to 900 new cases each year in the U.S. About half of those cases are reported in children and teens. However, this disease is much more common in dogs, with more than 10,000 cases a year occurring in the U.S.

“A vaccine is made out of the dog’s own tumor for the dog’s immune system to recognize,” said Jeffrey Bryan, DVM, MS, PhD, DACVIM-Oncology and professor of oncology at the MU College of Veterinary Medicine and director of Comparative Oncology Radiobiology and Epigenetics Laboratory. “Activated T cells are created from an apheresis procedure that collects lymphocytes from the dog’s bloodstream. These cells are essentially really angry at whatever they are supposed to attack. When put back into the body, they should identify and destroy tumor cells. Ideally, this immune response would destroy every last tumor cell.”

The dogs in the study — the researchers partnered with Elias Animal Health — received no chemotherapy and received only immunotherapy after their surgery. “It’s the first time that dogs with osteosarcoma have experienced prolonged survival without receiving chemotherapy, which is really exciting,” says Bryan. “Half of the dogs who received all aspects of the therapy are alive without disease well over a year and a half later. The average survival in dogs who receive amputation and chemotherapy [in a separate study by the National Cancer Institute] is nearly uniformly less than one year in published studies.”

The University of Missouri researchers hope to continue immunotherapy discovery with dogs in order to optimize the new therapy for future human clinical trials with the hopes of treating osteosarcoma and other cancers, especially metastatic osteosarcoma in children. They are currently continuing this work through another immunotherapy trial in progress with a grant by the Morris Animal Foundation through the National Cancer Institute Comparative Oncology Trials Consortium.

“This is promising,” says Bryan. “It harnesses the immune system to attack cancer. It does not use chemotherapy. Immunotherapy offers hope for cures, while this is rare in patients receiving chemotherapy. The process is now available commercially, and we will be following those dogs that receive ECI treatment to confirm the positive outcome.”

Read: A Cancer Diagnosis Is Not a Death Sentence for other promising developments in veterinary oncology.