The science writer and senior public relations specialist at Colorado State University’s College of Veterinary Medicine and Biomedical Sciences, Mary has been a journalist in Washington, D.C., Denver, and Seattle. 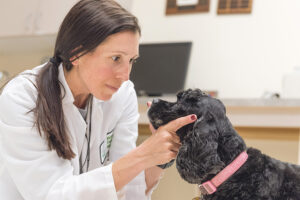 Epilepsy is the most common neurologic disorder in dogs, with a prevalence of 0.5% to 5.7%. Initial findings from a groundbreaking study on the use of cannabidiol (CBD) for canines with epilepsy are “promising,” according to the study’s leading veterinarian, Dr. Stephanie McGrath, a neurologist at Colorado State University (CSU)’s James L. Voss Veterinary Teaching Hospital. McGrath and colleagues found that 89% of canines that received CBD in a clinical trial had a reduction in the frequency of seizures compared to 43% in the control group.

“Overall, what we found seems very promising,” she says.

Sixteen canines were randomly assigned to treatment or placebo in the clinical trial, which lasted 12 weeks. Nine were treated with CBD, which has 0.3% or less of the psychoactive component of cannabis, tetrahydrocannabinol; the 7 canines in the control group received placebo. According to the 2014 U.S. Department of Agriculture Farm Bill, the compound is not considered marijuana and can be used for research purposes. McGrath decided to pursue this line of research after receiving frequent calls from clients and other veterinarians with questions about CBD.

“People are using CBD and they are excited about its potential,” she explains. “It’s a topic that is gaining traction in the media, but we truly know very little about it from a scientific standpoint.”

Why the Study Matters

Among the questions McGrath hopes to answer are the following: Is CBD effective? What is the amount or dose to recommend for canine patients? How is it absorbed in the body? What effect does it have on things like metabolism?

McGrath’s research team previously conducted a pharmacokinetic and safety study in 30 healthy canines to help determine the approximate amount of CBD to use for the CSU clinical trials. McGrath presented the research findings of the placebo-controlled clinical trial at the annual convention of the American Veterinary Medical Association on July 16, 2018. She shared additional results from this trial and a study of CBD for canines with osteoarthritis in late 2018.

“This pilot study is important—it does seem like there is a positive effect from the use of CBD for dogs with epilepsy,” says McGrath.

CSU launched a larger clinical trial with CBD for canines with epilepsy in January 2018. Funded by the American Kennel Club Canine Health Foundation, the study hopes to enroll 60 canines.

To learn more about the CBD clinical trial, visit the hospital’s website: cbddogtrial.com.

The Current State of Cannabis Research in Veterinary Medicine