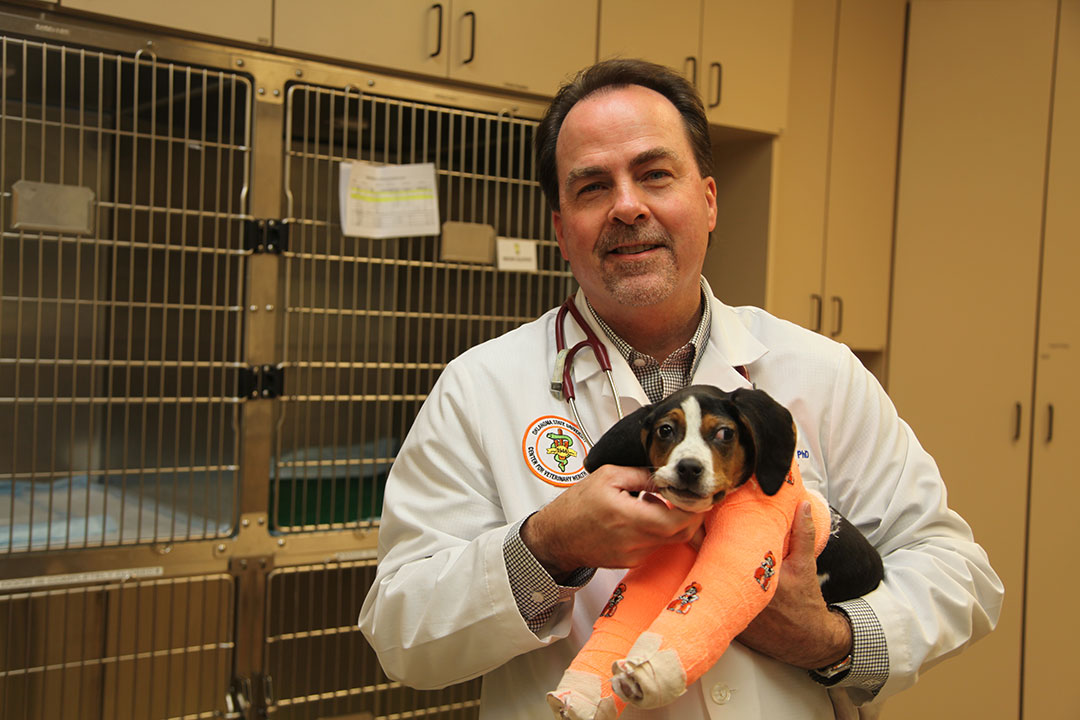 A puppy born with his front paws facing up instead of down and unable to walk is recovering after surgery at Oklahoma State University’s Center for Veterinary Health Sciences.

Clary says Milo, a part-beagle and part-coon-hound mix, suffered from congenital elbow lunation, or dislocation, in both elbows. “This disorder is very uncommon,” explains Clary. “In 27 years of service as a practicing small animal surgeon in referral practice, I have only seen three cases, Milo included. Many veterinarians will go their whole careers and never see one case. Referral surgeons are often sent the odd and unusual cases, and so for me to go 27 years — beginning as an intern at University of Georgia, then a resident at NC State, and then 23 years in practice — seeing only 3 cases, that tells you how uncommon it is.”

The day before Milo’s surgery, Clary and his team performed a CT exam, obtaining 3-D reconstructions to assess the bony anatomy. “Some dogs with this condition can also have bony deformities that can complicate the situation,” says Clary. “Fortunately, Milo’s bones were pretty straight.”

On the day of surgery, Milo was anesthetized, prepped and taken to the operating room. “For each elbow, we had to open the joint — an arthrotomy procedure — and realign the bones of the elbow,” describes Clary. “And in the process, that ‘untwisted’ that lower limb that had been rotated almost 180 degrees due to the elbow laxity.”

Clary then placed a pin across the joint in order to help maintain the bony alignment. “We have a C-arm fluoroscope machine in the operating room that takes a type of radiograph — this is what we used to insert each pin to a precise depth,” explains Clary. “Milo’s body will now lay down internal scar tissue alongside the joint and his bones will grow further in proper relation to one another.”

To help maintain the stability and minimize the stress on the pins, the team applied a front body splint before waking Milo up from anesthesia. “Because he is a rapidly growing puppy, we have had to change the bandage/splint every 7 days,” explains Clary. “This coming week we will remove the pins. If Milo’s body has done its job and the elbows are stable, we will begin the work of intensive rehabilitation therapy to restore range of motion in the joints and to help Milo learn how to walk.”

Jennie Hays, of the nonprofit Oliver and Friends Farm Sanctuary, is caring for Milo post-surgery. “Taking care of a puppy that is largely immobilized by the splint, and keeping the bandage clean and dry are no small tasks,” says Clary. “Jennie has done a great job.”

Success is not guaranteed, says Clary, and “in the cases drawn from the literature, we can expect odds of a little better than 50:50 that Milo’s elbows will stay in place — that is, not dislocate. If dislocation happens, generally it will be in the first 3 weeks after the pins are removed. If the elbow remain stable, with good rehab therapy, Milo should eventually be able to ambulate as most dogs do.”

The widespread attention the surgery has received has surprised Clary.

“When I asked our CVHS media specialist to help me document Milo’s case, my only thought was an opportunity to help educate CVHS students, referring veterinarians, breeders, and the general public within our region,” he says. “I never imagined the level of publicity the story has now attained — it has gone national, including AP News, and even international. Still, my chief objective in facilitating the telling of this story is to help colleagues and others know that on the rare occasion, they should come to meet a puppy like Milo with the congenital elbow luxation disorder, they will know that the situation is not necessarily hopeless.”