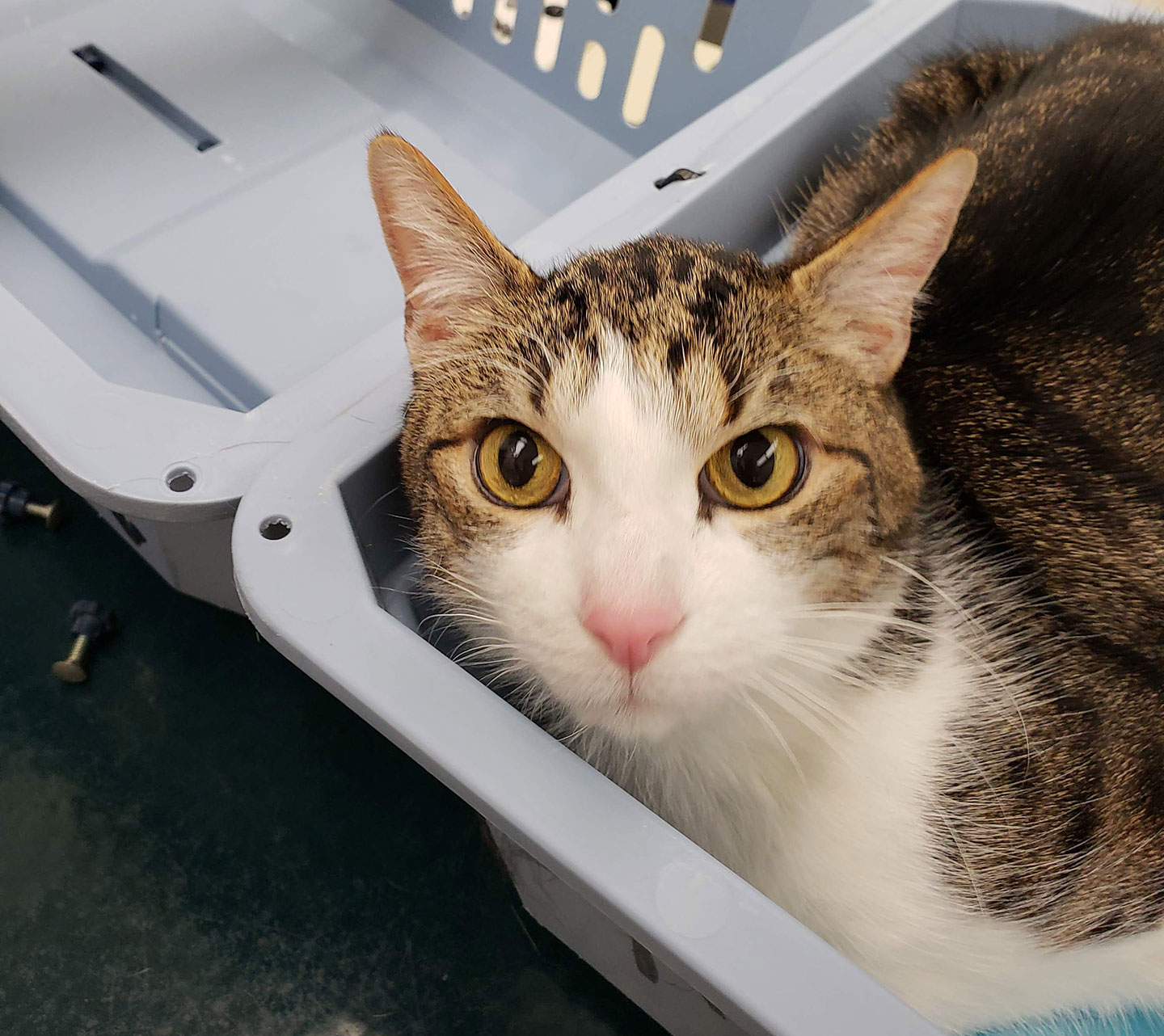 Linus the cat was a medical first for his neurologist at Washington State University, who performed an intense, innovative surgery. Doctors at WSU created a model of Linus' skull and then 3D printed a new skull for him. Photo Credit: Courtesy Dr. Annie Chen-Allen

Veterinarians at Washington State University’s Veterinary Teaching Hospital successfully treated a cat with three brain tumors by performing an intense, innovative surgery. The WSU doctors created a model of the cat’s skull and then 3D printed a new skull for him.

It was a medical first for Annie Chen-Allen, DVM, MS, DACVIM, the neurologist who treated Linus, a 9-year-old tabby. Chen-Allen knew from the start it would be a challenging surgery because Linus had multiple brain tumors.

“It is very rare in cats to see three meningiomas at one time,” says Chen-Allen. “But I always thought the tumors were resectable based on location. The tough part was that it was going to be a very extensive surgery, as we needed to remove extensive parts of the skull in order to access all three tumors with one craniectomy. If these tumors are successfully removed, cats can live a normal life for many years post-surgery.”

MRI imaging showed that the masses were large, marble-size tumors that were putting painful amounts of pressure on Linus’s brain.

The WSU veterinarians, nurses, and vet students prepared for a very intense surgery. “The brain surgery involved myself, my second year neurology resident, Dr. Jessica Chavera, our anesthesia team, our critical care doctors and technicians for post-op monitoring, radiologist Dr. Tom Wilkinson for the 3-D printing of the skull, and many veterinary students, who provided great care for Linus,” says Chen-Allen.

Because the tumors covered almost the entire surface of Linus’s brain, ”we knew it was going to be a radical surgery,” says Chen-Allen.

“After removing the skull for the first surgery, the brain immediately swelled and was herniating through the skull defect,” Chen-Allen says. “We also noticed a vascular bed connecting all three tumors. As we removed the first tumor, we encountered a lot of bleeding. Linus’s blood pressure dropped so low that we had to stop surgery immediately and give him a blood transfusion.”

Due to the complications, the team only had time to remove the two largest tumors, and because Linus’s brain was so swollen, they were not able to reconstruct his skull.

The team worried that Linus wouldn’t wake from the surgery, but by the next morning he was able to sit up and move around. “Within 5 days, he was pretty much back to his pre-surgical state,” Chen-Allen says. “Because he was doing so well, we decided to repeat another MRI to see how the brain was doing and also to plan for a second surgery. Because the brain was still very swollen, we had to come up with an innovative way to reconstruct the skull. Our radiologist, Dr. Tom Wilkinson, 3-D printed the skull and swollen brain so that we could create a skull template out of polymethylmethacralate (PMMA). Once created, we were able to sterilize the template to use it in surgery.”

Two weeks after the first surgery, Linus underwent his second surgery. “We removed the third tumor and reconstructed the skull with the premade template,” explains Chen-Allen. “We waited that long for the second surgery to allow some time for his brain to recuperate and also to allow his anemia — caused by blood loss from the first surgery — to be resolved. The second surgery went super well, despite working around the swollen brain. We were able to remove the third tumor and reconstruct the skull around the swollen brain without any complications.”

Linus recovered and went home just one week later. “He just came back 4 months post-surgery for radiation,” says Chen-Allen. “The repeat MRI shows no obvious regrowth of tumor. We are now doing fractionated radiation therapy to target microscopic tumor cells left behind. Linus is currently neurologically normal, back to his playful self. The owners are very happy with how he is doing, and we hope to bring him many years of good quality of life, if not a potential cure.”

The idea for the 3-D printed skull was “a collective idea between the Dr. Wilkinson and myself,” says Chen-Allen. “Dr. Wilkinson is experienced in 3-D printing, so I approached him with the possibility of utilizing 3-D printing for the skull and brain. This technique has not been clearly published in the veterinary literature and not something we had performed before. The technology of 3-D printing has been around — it just not has been readily applied to the feline skull as of yet. I do see this being used a lot in the future though.”

“Team Linus” hopes that the spunky tabby will have many years with his owners, enjoying an excellent quality of life. “In some cases of cats with meningiomas, with surgery and radiation, the result is a cure,” says Chen-Allen. “Sometimes with older cats, they will die of something else before the tumor grows back to cause problems. We hope this will be the case for Linus.”

Understanding feline behavior can help you provide a stress-free environment for cats when they visit your practice.

Get tips on assessing feline pain accurately and managing it effectively.