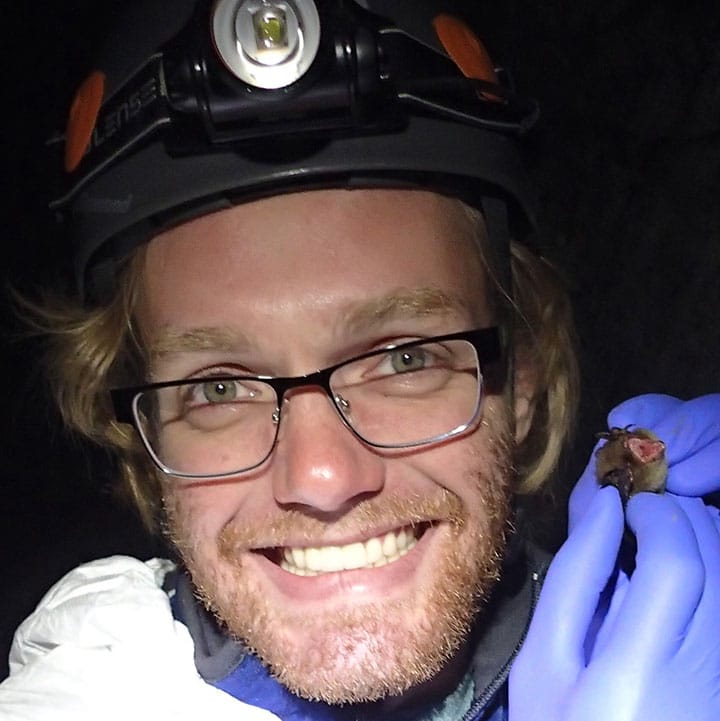 After Dr. Ben Golas completed his foray into a veterinary Jurassic World, he returned to his work with brown bats. Photo: Courtesy Benjamin Golas

The fossil record has left numerous examples of wide-ranging pathologies, including ones caused by trauma, in a number of prehistoric animals, such as dinosaurs.

The scientists who study these injuries are called paleontologists. They work in a unique field called paleopathology. As a forbes.com article notes, think of these scientists as participating in CSI: Jurassic.

When writer Cara Giaimo read a paper published in Philosophical Transactions of the Royal Society B, written by Les Hearn, a retired science teacher, and Amanda Williams, a psychologist, she was intrigued by their stories of injuries suffered by dinosaurs (Hearn and Williams examined possible pain behavior and responses to injury in dinosaurs). As she wrote in her article, Giaimo wondered: “If a banged-up dinosaur walked into a veterinarian’s office today, what might happen next?”

She had the idea for a story, but she needed a veterinarian who could examine the five cases she selected, and tell her how the fearsome, enormous reptiles would have been treated had veterinarians been around during the Mesozoic Era.

Dr. Golas first told Giaimo, “We might have to make the doors a little bit bigger.”

Joking aside, what followed in the story that was published in the Times on Oct. 4th was an interesting perspective on dinosaur injuries and how the similarities of these injuries match those found in more garden-variety type species, such as a dog or cat, that present to the veterinarian’s office.

“All the credit for the story’s conception and execution goes to Cara Giaimo,” says Dr. Golas. “She read a fascinating review by Les Hearn and Amanda Williams about dinosaur pain and injuries and had the fun idea of bringing the dinosaurs to the vet, going so far as to put together the five cases we discussed. She put out a call on Twitter looking for a veterinarian knowledgeable about birds willing to do a goofy story, and a friend recommended me as a point of contact. Having worked with a large variety of different bird species and taught Ornithology labs at Colorado State University, in addition to wildlife, exotics, and small animal general practice, I felt that I could extrapolate some strongly educated guesses as to how we might treat dinosaurs.”

Take Sue the T. rex, which is the nickname given to the best preserved and most complete Tyrannosaurus rex specimen ever found (in 1990, by Sue Hendrickson, an explorer and fossil collector). A documentary produced for the TV show Nova said that Sue’s death occurred in a seasonal stream bed, which washed away some small bones. Of the 360 known T. rex bones, around 250 of Sue’s were eventually recovered. During Sue’s life, they (the personified dinosaur, through Sue’s official Twitter and Field Museum press releases, uses the singular they pronoun and identifies as non-binary, as the specimen’s sex has not been determined) received several injuries and suffered from numerous pathologies. Sue had been pretty banged-up: They has an injury to the right shoulder region, which resulted in a damaged shoulder blade; a torn tendon in the right arm, due most likely from a struggle with prey; and three broken ribs.

If Sue Only Had a Vet

Dr. Golas told Giaimo that Sue’s injuries were traumatic: “If a big dog got hit by a car, we might see this same sort of presentation.” Dr. Golas said he’d temporarily immobilize Sue’s injured right arm by bandaging it against the body. “We would need a lot of vet wrap. And they might need a dino-size e-collar or ‘cone of shame.’”

Dr. Golas studies wildlife disease ecology. His PhD research is focused on “how an individual’s environment alters health outcomes when exposed to a pathogen, and how we can use that relationship to predict population health in natural systems,” he says. “Focusing on white-nose syndrome in bats, I am measuring the temperatures and humidity the bats use during hibernation, relate it to survival outcomes, and use this information to predict whether the population is viable or likely to die out in the longer term.”

Dr. Golas admits that dinosaurs are outside his realm of expertise. (“Growing up I always had a personal fondness for Ankylosaurus.”) “I had to do a fair bit of research to learn who my ‘patients’ were,” he notes. “I am increasingly interested in evolution and its effects on animal (and human) health, though, and it has been really interesting to think about dinosaurs in this light.“

His research led him to the work that’s been conducted in prehistoric pathology from the fossil record. “Not only can experts identify fractures, they can often determine the extent of remodeling and callus formation to determine whether the fracture was fresh at time of death or the patient had lived with it for some time,” he says. “The real difficulties are determining the origin and extent of soft tissue injuries, since we have very few clues in the fossil record. That said, some researchers have gotten very creative, such as the group that diagnosed an Ornithopod with a soft tissue injury on a toe based on an evident limp and consistently raised middle digit in fossilized footprints. One of the big mysteries that experts seem to be debating is what caused holes in Sue the T. rex’s jaw; some suggest bacterial abscesses like Actinomyces while others suspect protozoal cysts like Trichomonas. Microparasites don’t preserve in fossils like dinosaur skeletons do, so it will be tricky business to discern the true cause.”

Though Dr. Golas isn’t going to walk away from his research on how pathogens alter an animal’s health (specifically, brown bats), he admits that dinosaurs spark the imagination of many people. “You have these giants that roamed the earth millions of years before us, and we still have so much to learn about them. I like to think about how they would have looked; after millions of years of evolution you might expect some pretty strange specialized structures, like wattles, throat pouches, or knockers seen in birds today.”