What’s Next for Veterinarians?

With leaps and bounds happening in animal-health research, pets are thriving in the golden age of medicine and technology.

Cutting-edge diagnostic tools, exciting technological developments, and promising advances in animal-health research have provided veterinarians with the ability to ensure that their patients stay healthy and live longer.

The use of wearable medical devices—GPS trackers, radio-frequency identification sensors, Bluetooth, cameras, antennas, transmitters, etc.—shows no sign of slowing down as both pet owners and veterinarians embrace the technology they offer. These devices are not new, but they are having a profound impact on veterinary medicine via the Internet of Things (IoT). IoT is “a system of interrelated computing devices, mechanical and digital machines, objects, animals or people that are provided with unique identifiers and the ability to transfer data over a network without requiring human-to-human or human-to-computer interaction.”2 Simply put: IoT is creating a world where all devices that can be turned on and off, from toothbrushes to TVs, will be connected and sharing data. The number of connected wearable devices worldwide is expected to hit over 1.1 billion by 2022; in 2016, that number was just 526 million.3

Initially, wearable medical devices were basic GPS or single-activity trackers. “If you look at some of the early companies on the market, they were trying to solve a really basic problem—lost dogs,” says Aaron Massecar, assistant director of the Translational Medicine Institute at Colorado State University. “If a dog jumped over the fence or gets out somehow, it has a GPS collar on and you could track your dog. That was the single-use case that developed.”

“They were really cool, but the technology didn’t go anywhere,” says Massecar. “But then Whistle [makers of a popular pet tracker] got acquired by Mars and Mars started distributing their trackers to a select group of their Banfield clients. They started getting tons and tons of data. The activity trackers moved away from this really basic, not well-defined tool in terms of diagnostics into the big data area. And once it jumped into the big data area, they could run their analytics on it and look at thousands of users simultaneously.”

Mars Petcare’s Pet Insight Project synched the information from the Whistle activity trackers to Banfield’s hospital data. “That’s when they started coming up with some really interesting things, like generating data about post-surgery recovery for animals,” says Massecar. “The average veterinarian thinks an animal will recover within 7 days of post-surgery. But what they were able to show is that they’re not at full activity level until around 28 days later. They realized that the amount of pain control and other things they would be doing to help the animal get back to regular health should be based on a month of recovery instead of just 7 days.”

Other applications include helping veterinarians to detect early signs of medical conditions, such as dermatological issues. “Before you get to the point where an animal is in a lot of pain or has a flare-up of a condition that causes bleeding, for example, [the veterinarian] is able to say, ‘We need you to come in right away before it gets to that point,’” says Massecar. “And that’s very exciting.”

Biomarker testing is a wide-ranging field, but one diagnostic trend that’s emerging is predictive tools that are making it possible for clinicians to intervene earlier to manage disease in dogs and cats. Just as wearable medical devices have contributed to the massive amounts of data available to veterinary researchers, in-hospital data can be used to develop predictive algorithms and tests.

“You can, at an earlier stage in the life cycle of the disease or pathology, identify things that are going to happen in the future and that’s the most important benefit,” says Massecar. “In 6 months, there’s going to be ‘x’ problem, and we have the biomarkers that have given us an indication of this, so let’s start doing something about it, let’s start treating it, let’s start engaging in preventative care so that the acute onset is not going to be as traumatic.”

Researchers at Waltham Petcare Science Institute, a UK Mars Petcare company, evaluated 20 years of data from 150,000 cats treated at Banfield Pet Hospital and looked at 35 possible parameters, such as age, sex, breed, signalment, and various lab values. They narrowed it down to 6 parameters that appeared to be the most important for identifying cats at high risk of developing chronic kidney disease (CKD)—blood urea nitrogen (BUN), creatinine, urine specific gravity (USpG), urine protein, urine pH, and white blood cell count—plus the cat’s age. The result is RenalTech, available through Antech Diagnostics, which can predict CKD in cats 2 years prior to the patient showing any symptoms of the disease. RenalTech has been shown to be more than 95% accurate.

The future of biomarker predictive tools is bright, says Kay O’Donnell, vice president of Waltham. “The key is being able to connect and integrate the data. We are on the edge of something quite remarkable that will increase the quality of life for the pets that we serve.”

DNA tests are yet another game-changing category that has seen explosive growth recently. Along with revealing breed type, these tests reveal genetic predisposition to certain diseases, such as polycystic kidney disease and dilated cardiomyopathy in dogs and hypertrophic cardiomyopathy in cats.

“There is much more information available for clients to learn about their pet, beyond just learning the breed makeup,” says Travis Arndt, director of the Animal Medical Center of Mid-America. “And though most early versions tested for one condition only, newer genetic tests allow for multiple genetic conditions to be tested at one time, with a single blood draw.”

A number of tests can be run by the lab, including full genetic attribute profiles that test for multiple medical conditions and traits and individual genetic tests for when there is a concern about a specific medical issue.

Armed with the knowledge that a dog or cat may be more likely to have certain conditions or diseases, the veterinarian can create a customized health plan. “Conditions such as lens luxation, degenerative myelopathy, and metabolic diseases would benefit from early diagnosis and intervention,” says Arndt. Another example is von Willebrand’s disease or factor VII deficiency. “Prior to the pet receiving anesthesia and surgery, we can be prepared to minimize bleeding with surgery or have additional blood products on hand should a transfusion be needed.” Early diagnosis is also important if a pet has the MDR-1 gene, resulting in sensitivity to many different medications. Knowing if a pet has this disorder, one can plan to avoid specific medications from which individuals experience adverse anesthetic events, says Arndt.

“Looking at genetic predispositions is an area where we can gain actionable insights to benefit the animal,” says Massecar. “It doesn’t necessarily mean that those things will happen, but that there’s a prevalence or predisposition toward something. We can do something about it now rather than waiting. And people seem to be willing to pay for that.”

The rapidly evolving, promising field of molecular diagnostics offers clinicians the ability to quickly detect pathogens and their characteristics, so that they can determine appropriate treatments and measures, such as prophylaxis, therapy, and biosafety plans to control disease outbreaks.

CADET BRAF and BRAF-PLUS, developed by Antech Diagnostics, are the first liquid biopsy tests to detect the most common form of canine bladder, urethral and prostate cancer. Antech, through Antech Molecular Innovations, a joint venture with Sentinel Biomedical, is broadening access to these tests. CADET BRAF is a DNA-based diagnostic test that detects the presence of a single mutation present in 85% of confirmed cases of canine transitional cell carcinoma (TCC), also called urothelial carcinoma (UC). CADET BRAF uses forensic-level sensitivity to analyze free-catch urine to detect 85% of cases of TCC/UC in a manner that is less expensive and invasive than current alternate methods. CADET BRAF-PLUS detects DNA copy number changes and is used for dogs with clinical signs of TCC/UC that are not associated with a BRAF mutation, increasing the overall sensitivity to detect a TCC/UC to over 95% for eligible samples.

Advances in three-dimensional (3D) printing to make orthotics and prosthetics, to aid in surgical reconstruction, and to make practice models offer exciting possibilities for the veterinary profession.

It’s a meticulous process: The 3D printer prints one layer, waits for it to dry, and then prints the next layer on top, until an exact replica is produced. It can take several hours to print a bone and up to 24 hours to print a skull—but once a file is created, infinite copies can be printed.4 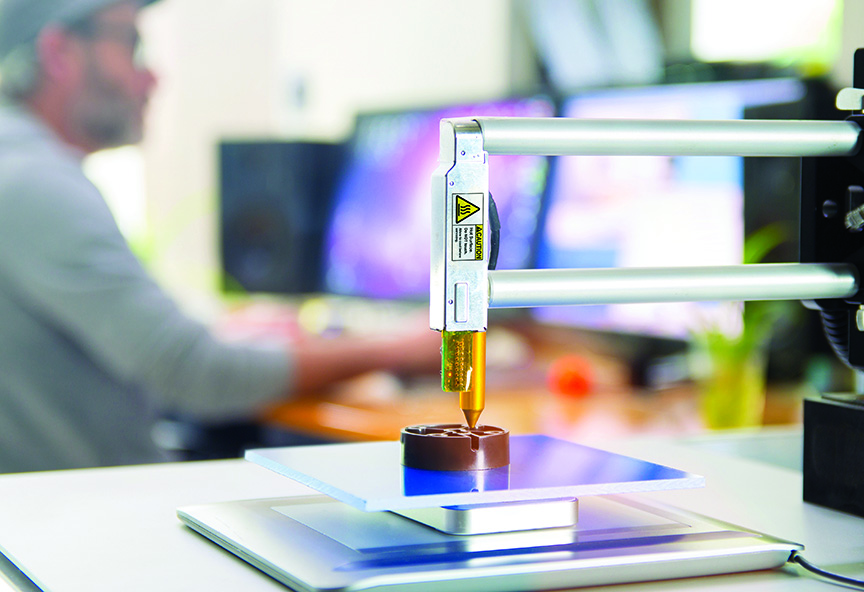 Human medicine has been using 3D printing for years, and veterinary medicine is quickly catching up. As this technology becomes cheaper, it will be used in a variety of ways, from implants to prosthetics to tissue replacements. Alexander Kirch/shutterstock.com

“In 1900, if you asked people what they wanted for transportation, they would just say ‘a faster horse,’” says Massecar. “They had no idea that the automobile was right around the corner. And so people don’t necessarily see the capabilities [of telemedicine]. What people are actually doing, by the thousands if not hundreds of thousands, are asking really basic questions—derm conditions, behavior, vomiting, urination. They might be able to go to PetMD for those answers, but they’d much rather interact with a human.”

Telemedicine helps alleviate some of the issues that currently affect clients and their ability to get veterinary care for their pets. “The two main barriers are cost and convenience,” says Massecar. “And anything that can help reduce those barriers is going to provide access for more animals.” 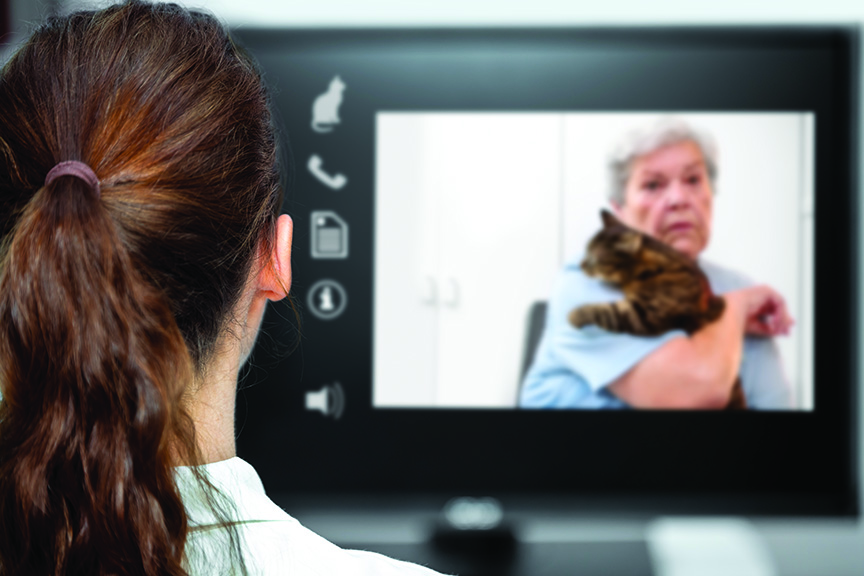 Telemedicine and telehealth tools can have an impact on the clinic’s bottom line. After a telehealth consultation, “people are way more likely to go in to the clinic because someone has just told them they need to come in,” says Aaron Massecar, assistant director of Colorado State University’s Translational Medicine Institute. “And they spend about 25% more than the average client.” Miriam Doerr Martin Frommherz/shutterstock.com