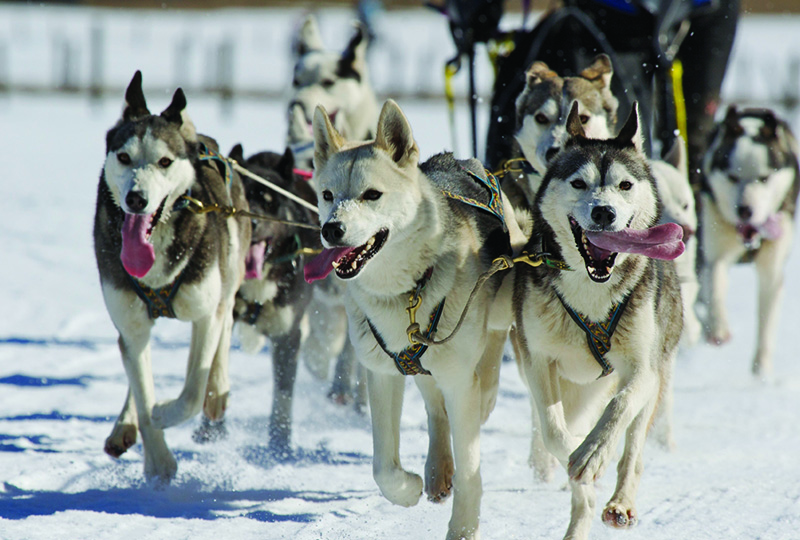 Dogs frequently engage in performance-based competitive and recreational activities, ranging from flyball to sled pulling to agility, and nutrition is increasingly used to maximize an animal’s potential and stamina. Each canine activity has unique requirements for performance, which influence the caloric requirements and metabolism of individual animals.

Modification of feeding can, therefore, affect a dog’s adaptation to such events. An expanding body of evidence suggests best practices for dietary modification in these dogs, and practitioners should be prepared to discuss the growing field of performance nutrition with interested owners.

Calories provide the fuel for work. The normal activity of most pet dogs requires:1

Additional activity requires more calorie expenditure. Veterinarians have frequently multiplied the resting energy requirement by a factor to account for the activity level of a dog.2 However, the increases in energy expenditure by working dogs are directly related to the distance traveled during that work.

Calories Based on Distance

The American College of Veterinary Nutrition (acvn.org) and Today’s Veterinary Practice (tvpjournal.com) are delighted to bring you the Nutrition Notes column, which provides the highest quality, cutting-edge information on companion animal nutrition, provided by the ACVN’s foremost nutrition specialists. The primary objectives of the ACVN are to:

Increase the competence of those practicing in this field

Encourage continuing education for both specialists and general practitioner

The Role of Muscles

Muscles allow dogs to perform activity, and muscle fibers are generally classified as type I (slow twitch) or type II (fast twitch). Type I fibers contain lower amounts of myosin adenosine triphosphatase compared with type II fibers; this difference is responsible for the slower contraction observed in type I fibers.1 Type II fibers are subdivided into:

While cats are known to have relatively equal concentrations of type I, IIa, and IIb fibers, dogs possess fiber types that display substantial aerobic and anaerobic capacity, which had led some authors to question whether IIb fibers even exist in this species.1,5 These species-specific muscle differences are consistent with evolutionary hunting strategies. Dogs are built for endurance hunting; cats for stalking and short chases.6

As the distance and duration of exercise increase, dogs use fat as an aerobic fuel source. Interestingly, dogs at rest also display higher rates of fat oxidation compared with other species. Therefore, fat likely has the most profound effect on increasing stamina in dogs.1

This difference in energy density between fuels means that working dogs can be fed additional calories by increasing fat in the diet rather than the amount of food given. This must be done cautiously to avoid inadvertently creating relative nutrient deficiencies.

Calories Based on Exercise Duration

Many canine sports require a consistent amount of exercise from participants.

Such information can be used to classify canine sports according to expected energy requirements (Table 1).4

In addition to distance and exercise duration, other factors, such as thermal stress, terrain or slope, and ambient temperature, should be considered.

The guaranteed analysis found on dog food packaging is the primary reference for owners, but is of little utility for comparing pet foods. Instead, nutrients are best expressed on a caloric basis, commonly related as the mass (g) of a given nutrient per 1000 Calories (kcal).

This value can be estimated from the guaranteed analysis by using a calculation method described in Beyond the Guaranteed Analysis: Comparing Pet Foods, available at tvpjournal.com in the Resources section (see In-Clinic Materials). 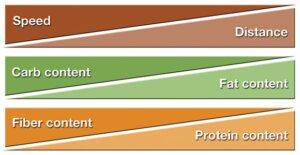 Owners of working dogs understand that hydration is critical to safe and maximal performance. Veterinarians working with athletic dogs may encounter inquiries about the best ways to rehydrate animals after exercise.

Human athletes are familiar with electrolyte considerations during performance; however, dogs have important differences in electrolyte handling:

FEEDING PERFORMANCE DOGS BASED ON AGE

Owners may acquire and train young growing dogs with the intent of competing in canine sports. Nutritional requirements are generally much narrower during growth; therefore, consideration of appropriate feeding is critical.

Senior dogs have decreased performance and reduced maximal energy expenditure, which is probably related to a loss in lean body mass (muscle), secondary to sarcopenia, inactivity, or increased muscle turnover.19

Senior diets should be critically evaluated by the following considerations to determine whether they are appropriate:

Both retired and competing geriatric athletes may benefit from rehabilitation and the related nutritional interventions, which will be discussed in Part 2 of this article series.

Nutrition is a cornerstone of any veterinary assessment, and the evaluation of performance should include dietary analysis. The aforementioned distance-dependent energy requirements and nutrient considerations provide simple principles for optimizing an animal’s potential, as outlined in Table 3.