Successful treatment of CKD in dogs and cats involves a multimodal approach, including implementation of veterinary therapeutic renal diets.

Dr. Sanderson received her BS degree from the University of Wisconsin-Green Bay and DVM degree from the University of Minnesota. After a rotating small animal internship at Oklahoma State University, she returned to the University of Minnesota for a combined dual residency (small animal internal medicine and clinical nutrition) and PhD program, where her research focused on diet-induced dilated cardiomyopathy in dogs. She is currently an associate professor at the University of Georgia College of Veterinary Medicine. Dr. Sanderson has received the Faculty Recognition Award and the Zoetis Distinguished Veterinary Teacher Award. She has published more than 85 manuscripts, book chapters, and research abstracts. Her research interests include the use of nutritional management for preventing diseases in dogs and cats. Areas of particular interest include urology and nephrology, obesity, prebiotics, probiotics, diet-induced dilated cardiomyopathy, and the human-animal bond.

Today’s Veterinary Practice is delighted to announce that the American College of Veterinary Nutrition (acvn.org) has partnered with TVP to bring our readers the NUTRITION NOTES column.

The ACVN achieves these objectives in many ways, including designating specialists in animal nutrition, providing continuing education through several media, supporting veterinary nutrition residency programs, and offering a wide array of resources related to veterinary nutrition.

By bringing this column to TVP readers, the ACVN is reaching out to all veterinary professionals to provide the highest quality, cutting-edge information on companion animal nutrition, contributed by their foremost nutrition specialists.

Chronic kidney disease (CKD) is the most common type of renal disease in senior patients, but can occur in animals of all ages. Estimated incidence of CKD in all dogs and cats is 0.5% to 1.5%, respectively, and, in cats over 15 years of age, 30%.1 In senior patients, CKD commonly results in morbidity and mortality.2

CKD is defined as the presence of structural or functional abnormalities of one or both kidneys that have been present for an extended period of time, usually 3 months or longer. It is characterized by irreversible and progressive loss of kidney function, leading to azotemia, uremia, and clinical signs associated with diminishing renal function.

A uremic crisis is defined as a patient having at least 2 of the following clinical signs: depression, lethargy, anorexia, vomiting, ammonia breath odor, or uremic stomatitis.

Many therapeutic interventions have been developed or advocated for management of CKD; however, evidence of efficacy or effectiveness of these interventions is often lacking or highly variable. If current recommendations undergo the scrutiny of evidence-based medicine, very few meet the criteria to receive a Grade I designation (Table 1). 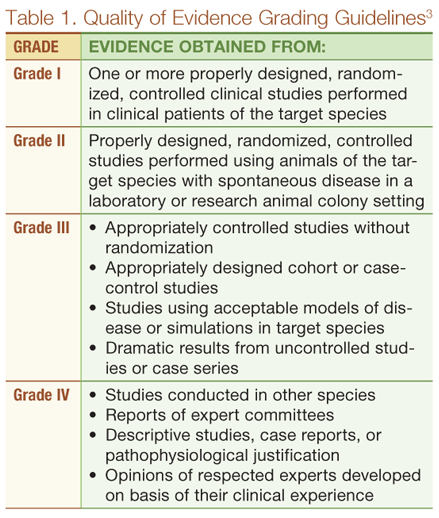 Research has shown that, for managing CKD in dogs and cats, veterinary therapeutic renal diets are superior to maintenance diets (Table 2).4,6-9

In the cats in Study 4 (Table 2), median survival time was longest in cats fed the diet with the highest eicosapentaenoic acid (EPA) content and one of the highest potassium levels. Survival times were lowest for the diet not supplemented with EPA and the lowest potassium content.8 Unfortunately, the identity of the therapeutic renal diets evaluated in this study was not provided, and it is likely that diet composition has changed since this study was published.

The majority of work performed to determine which nutrients are beneficial at what levels in the management of CKD has been done in dogs. The remainder of this article will focus on research results from these studies.

A study was conducted in dogs to determine the effects of high (H) and low (L) levels of dietary phosphorus and protein on renal function and survival in adult dogs with induced CKD.10

Therefore, this study showed that survival of dogs with induced CKD was enhanced by phosphorus restriction but not by protein restriction.

Conversion Rates. While LA is readily converted to AA, ALA converts to EPA and DHA much more slowly. This conversion rate is < 10% in humans, and believed to be rather limited in dogs as well.12

Omega-3 PUFA Benefits. While dietary ALA has some benefits in healthy dogs and management of some dermatologic diseases,13 the majority of therapeutic benefits from omega-3 fatty acids result from:

Therefore, when using omega-3 PUFAs for dietary management of medical conditions, the source should also already contain EPA and DHA because the conversion rate of ALA to EPA and DHA may be too slow to benefit the patient.

Additional Benefits. When nephrons are destroyed in CKD, the remaining viable nephrons hypertrophy in an attempt to compensate, resulting in a maladaptive increase in glomerular capillary pressure (GCP). Dietary omega-3 fatty acid supplementation in the form of fish oil can have beneficial effects in reducing GCP.

In studies by Brown, et al,14-16 the effects of various dietary omega-6:omega-3 ratios on glomerular hypertension in a canine remnant kidney model were evaluated.

A free radical is any atom or molecule that has a single unpaired electron. Normal aerobic metabolism, along with many environmental factors, contributes to the formation of reactive oxygen species (ROS) in the body. ROS can damage membrane lipids, nucleic acids, and proteins in the body that, in turn, contribute to disease processes.

Since CKD occurs most commonly in older dogs:

Optimum Supplementation. In a study by Brown,16 the effects of omega-3 fatty acid and antioxidant supplementation were evaluated separately and in combination in 6- to 8-year-old beagle dogs with induced CKD. Four groups of 8 dogs were fed one of 4 diets (Table 4). 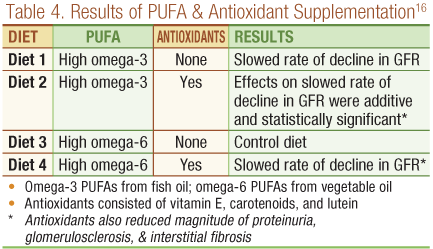 The traditional approach to dietary management of CKD in dogs was reduction of protein intake to less than the minimum levels for adult maintenance (18% DMB) recommended by the Association of American Feed Control Officials (AAFCO). The rationale for this approach considered that:

Amount of Dietary Protein. However, reduced dietary protein for management of CKD in dogs is not necessarily beneficial.

Recently, it has been shown that dietary protein levels can be increased in dogs with CKD without adversely affecting life expectancy. However, the diet must be phosphorus restricted, using protein sources naturally lower in phosphorus concentration, such as soy isolate.5

Enteric Dialysis. In addition, by using nonrenal methods of excreting urea from the body, such as enteric dialysis, it may be possible to increase dietary protein fed to dogs with CKD without increasing nitrogen excretion burden on the kidneys. To promote enteric dialysis, diets can be supplemented with certain types of fermentable fiber, such as beet pulp, fructooligosaccharide (FOS), and gum arabic. 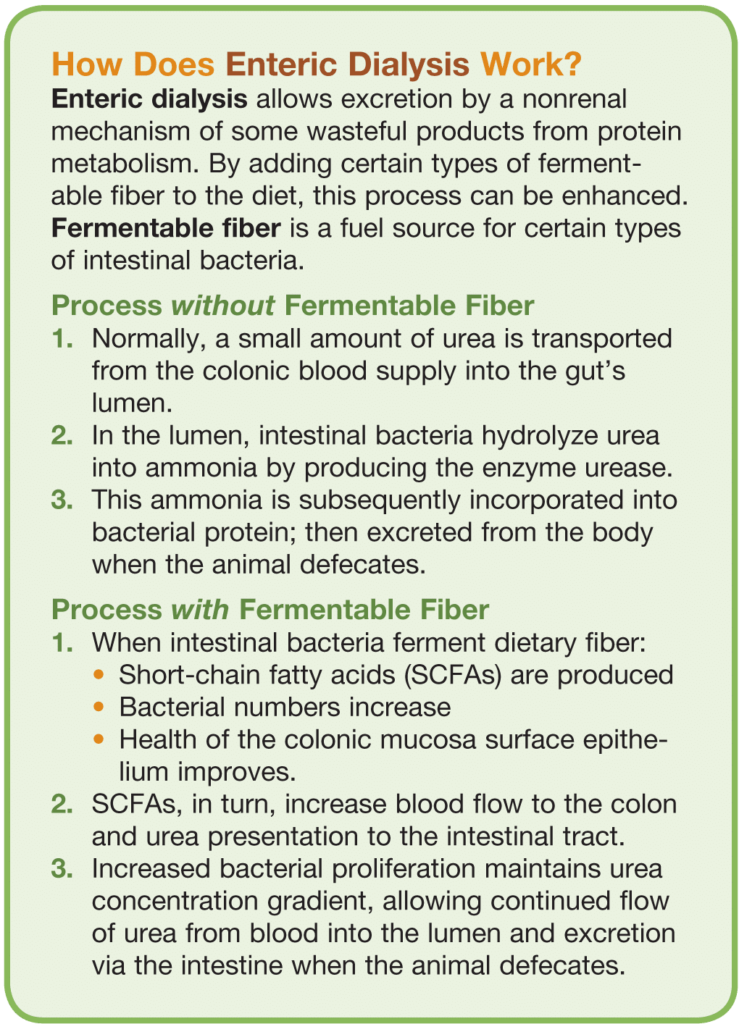 A study evaluated 12 healthy adult dogs that, for 14 days, were fed either a normal maintenance diet or the same diet supplemented with a fermentable fiber blend, which included beet pulp, FOS, and gum arabic.22 Dogs fed the diet containing the fermentable fiber blend had increased fecal nitrogen excretion (34% increase; p < 0.05) and decreased urinary nitrogen excretion. Therefore, it appears the body increased nitrogenous waste product excretion via a nonrenal mechanism; this mechanism could be used to potentially increase dietary protein intake in dogs with CKD, without increasing buildup of uremic toxins.

The mainstay of therapy for CKD—in both dogs and cats—is dietary management. Research has shown that:

It is important to keep in mind, though, that commercial therapeutic renal diets vary in their nutritional composition. 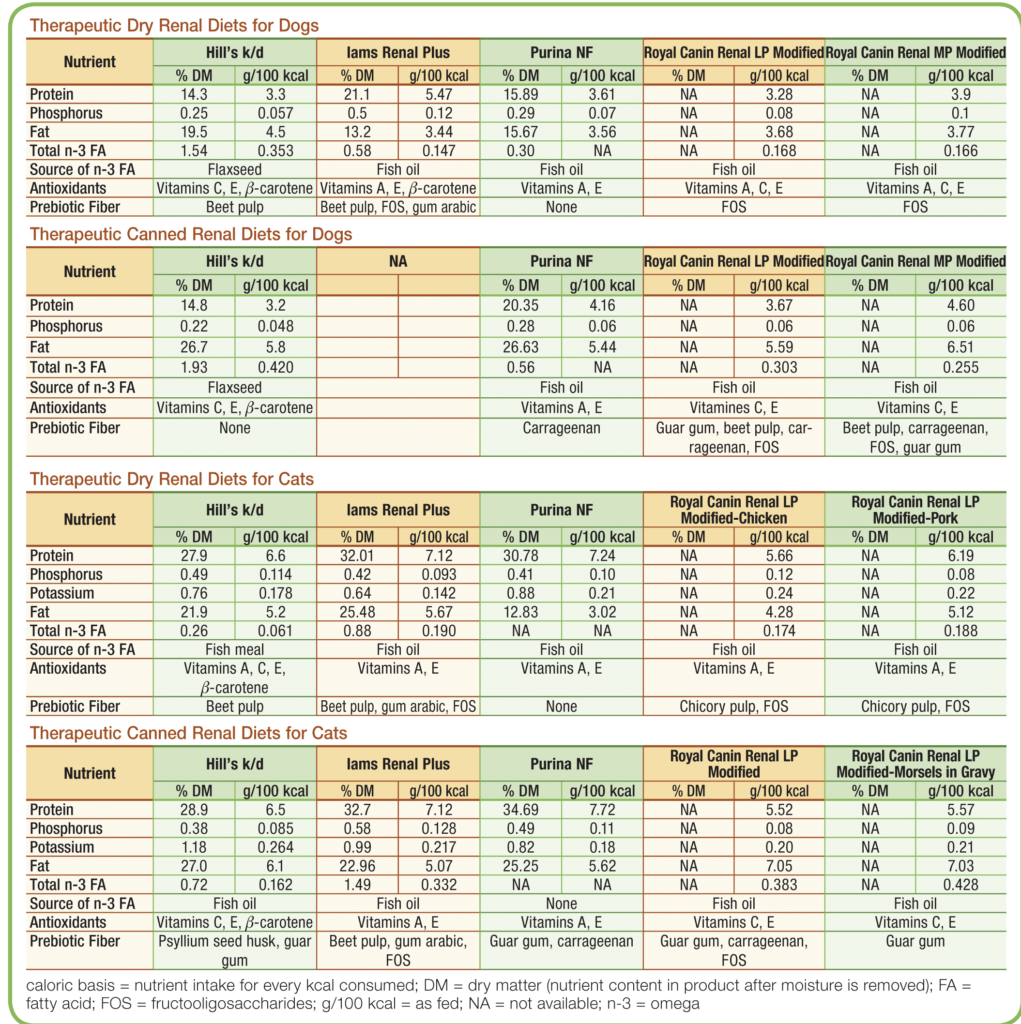