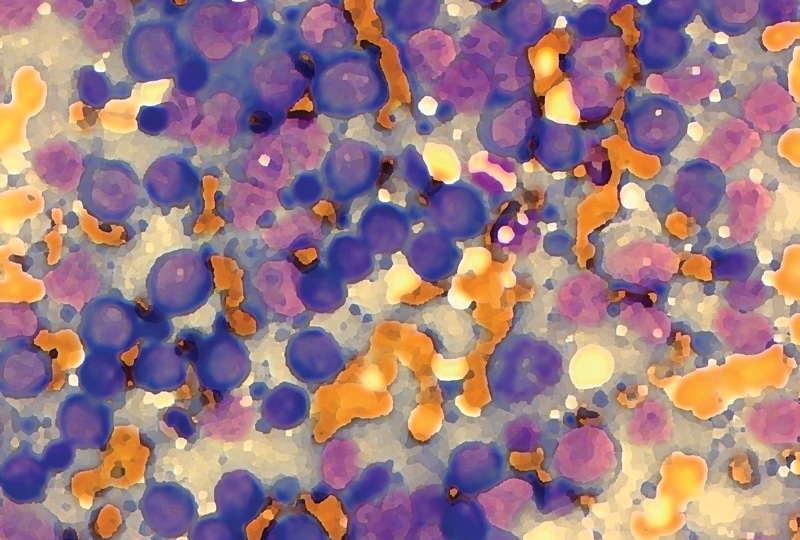 Lymphoma is the most common hematopoetic tumor in dogs and cats. New information has recently come to light that expands our knowledge regarding how to diagnose and manage this disease.

The Latest in Lymphoma: Overview

Cytologic examination of fine-needle aspirate samples is often sufficient to determine a diagnosis of large-cell lymphoma (Figure 1), which is the most common form in dogs. Recently, a small-cell form of lymphoma has been identified in both cats and dogs. Because the neoplastic cells in this type of lymphoma are similar in appearance to normal lymphocytes, it can be difficult to distinguish between lymphoid hyperplasia and small-cell lymphoma on cytology (Figure 2A).

Figure 1. Prescapular lymph node aspirate: Many large neoplastic lymphoid cells (black arrows) are seen, as well as several small lymphocytes (red arrows). The neoplastic large lymphoid cells are 12 to 17 mcm in diameter with an eccentrically located round to oval nucleus, granular chromatin, 1 to multiple nucleoli, and a small to moderate volume of basophilic cytoplasm. A neutrophil (yellow arrow) is included in the picture for size comparison. (Wright-Giemsa stain; magnification, 50×). Courtesy Dr. Reema Patel, University of Pennsylvania 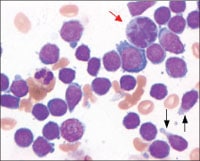 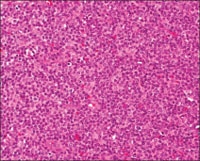 Figure 2B. Mandibular lymph node biopsy: The paracortical region of the node is expanded by sheets of neoplastic intermediate-sized lymphocytes (nuclei are approximately 1.5× diameter of a red blood cell). The cells have round to oval nuclei, with occasional nuclear indentations and a moderate amount of lightly eosinophilic cytoplasm. (H&E stain [hematoxylin & eosin stain]; magnification, 20×). Courtesy Dr. Amy Durham, University of Pennsylvania 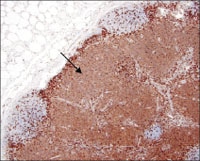 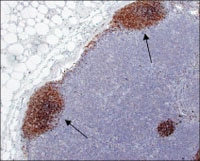 As such, biopsy samples are often needed to diagnose small-cell lymphoma (Figures 2B–2D). Most dogs with lymphoma present with generalized peripheral lymphadenopathy. Although performing a lymph node excisional biopsy in a dog is certainly more invasive than fine-needle aspiration, it is considered a minor surgical procedure for most patients. 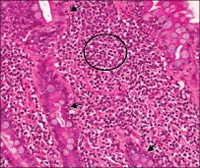 Figure 3. Small intestinal biopsy: The lamina propria is infiltrated by sheets of small neoplastic lymphocytes (nuclei approximately 1× diameter of a red blood cell) (arrows). The cells have round hyperchromatic nuclei and a moderate amount of lightly eosinophilic to clear cyptoplasm. The cell population is monomorphic and mitoses are not seen. Neoplastic cells (circle) are also noted within the mucosal and crypt epithelium. (H&E stain; magnification, 20×). Courtesy Dr. Amy Durham, University of Pennsylvania

Although a recent paper indicated that the risk for complications related to full-thickness intestinal biopsy in cats with lymphoma is low, owners may still hesitate to consent to this procedure due to its invasiveness and cost.4 In addition, the distinction between reactive and neoplastic lymphocytes can be challenging to make even on histopathologic samples.

PARR (PCR for antigen receptor rearrangement) is an additional diagnostic test that can aid in diagnosing lymphoma using either cytologic or histopathologic samples. PARR determines if the cell population is clonal or not, and since neoplastic cell populations are often descended from one malignantly transformed cell, a PARR result indicating a clonal population supports a diagnosis of lymphoid neoplasia.
In dogs, the sensitivity of this test is between 75% and 85%, with a specificity of 92% to 94%; in cats, a sensitivity of 60% to 78% has been reported.5-7 These values indicate that, similar to other diagnostic tests, PARR testing results must be interpreted in light of other clinical data.

PARR may be a reasonable diagnostic test to consider in the face of equivocal cytology findings when obtaining histopathology samples is not feasible or declined by owners; in addition, it may also be used when both cytology and histopathology results do not result in a definitive diagnosis of lymphoma, but lymphoma is still suspected based on other clinical findings.

Immunophenotype is a well-known prognostic factor for canine lymphoma.1 Several reports have concluded that dogs with large-cell, T-cell lymphoma have lower response rates, shorter remission durations, and shorter survival times compared to dogs with B-cell lymphoma.8-12 Immunophenotype can be determined using PARR or immunohistochemical staining for T- and B-cell markers. Recent studies have attempted to expand on this information by evaluating response to specific chemotherapy protocols in dogs with B- versus T-cell lymphoma.

It is worth pointing out that neither of these studies had a control group, and dogs were included in the first study if they had confirmed T-cell lymphoma or were hypercalcemic, while all dogs in the second study were confirmed to have T-cell lymphoma. More research is needed to determine the value of immunophenotype for predicting differential response to chemotherapy protocols in canine lymphoma.

Survival Based on Body Weight Changes During Treatment

The high frequency of muscle and fat loss in cats with lymphoma coupled with the significance of body weight and BCS on prognosis indicates that further research into these aspects of feline lymphoma are needed. Potential areas for study include:

1. What is the value of immunophenotype for predicting differential response to chemotherapy protocols in canine lymphoma?

2. How can chemotherapy protocols be modified to decrease the risk of treatment-related weight loss in cats?

3. What other treatment options in addition to chemotherapy may reverse the cycle of weight loss and poor survival in cats at risk?

Newer reports on treatment of canine and feline lymphoma have investigated:

As dose-intense chemotherapy protocols carry an in-creased risk of toxicity, it is helpful to have updated and accurate information about how to decrease this risk.

Neutropenic sepsis is a serious complication of chemotherapy in veterinary patients, and treatment generally involves intravenous fluids, antimicrobial therapy, and additional supportive care medications. Antibiotic prophylaxis is often used to prevent this condition, but until recently, the risk factors for sepsis (and thus knowledge of which patients would benefit the most from prophylactic antimicrobial therapy) were unknown.

Several risk factors for sepsis were identified in a case control study that compared patients with chemotherapy-induced sepsis to patients undergoing chemotherapy that did not experience sepsis.27

Results from a placebo-controlled clinical trial showed that trimethoprim-sulfadiazine prophylaxis decreased the incidence of hospitalization and nonhematologic toxicity following doxorubicin chemotherapy in dogs with lymphoma as well as osteosarcoma.28 These two studies provide evidence supporting the use of prophylactic antimicrobial therapy following administration of doxorubucin and vincristine to dogs with lymphoma.

Dose-intense CHOP chemotherapy protocols require financial and time commitments from owners, which may not be feasible for all clients, prompting evaluation of protocols that may require fewer clinic visits.

The combination of doxorubicin and cyclophosphamide versus single-agent doxorubicin has been evaluated in a randomized, placebo-controlled clinical trial.29

A protocol consisting of lomustine and prednisone has been reported in an even smaller group of dogs (N = 17), with a response rate of 53% and remission duration of less than 2 months, which does not compare favorably to other first-line chemotherapy protocols for canine lymphoma.30

Combination chemotherapy is also considered standard of care treatment for feline lymphoma, and common toxicities include decreased appetite and weight loss. Because of the association between body weight/BCS and survival in cats with lymphoma, treatment strategies that minimize such toxicity may be beneficial to those patients.

One potential modification is the use of chemotherapy drugs that have the same efficacy with less toxicity. The substitution of vinblastine for vincristine is one such example.

Drugs for the Rescue Setting

New information continues to emerge regarding the diagnosis and treatment of lymphoma in both cats and dogs. This new information allows us to continue to ask and answer more specific questions, ultimately leading to advances in our ability to accurately diagnose, classify, and treat canine and feline lymphoma.