Oral Cyclosporine Use in Dogs

Dr. Archer is associate professor and service chief in the Department of Clinical Sciences at Mississippi State University College of Veterinary Medicine, where he received his DVM degree and completed an internship and residency. His research focuses on hematology and immune-mediated disorders, especially use of immunosuppressive therapy.

Dr. Mackin is professor and head of the Department of Clinical Sciences at Mississippi State University College of Veterinary Medicine. He received his BVMS degree at Murdoch University in Australia, completed an internship and residency at the University of Melbourne, and an internal medicine residency at Ontario Veterinary College. His research focuses on hematology, immunosuppressive therapy, and transfusion medicine. 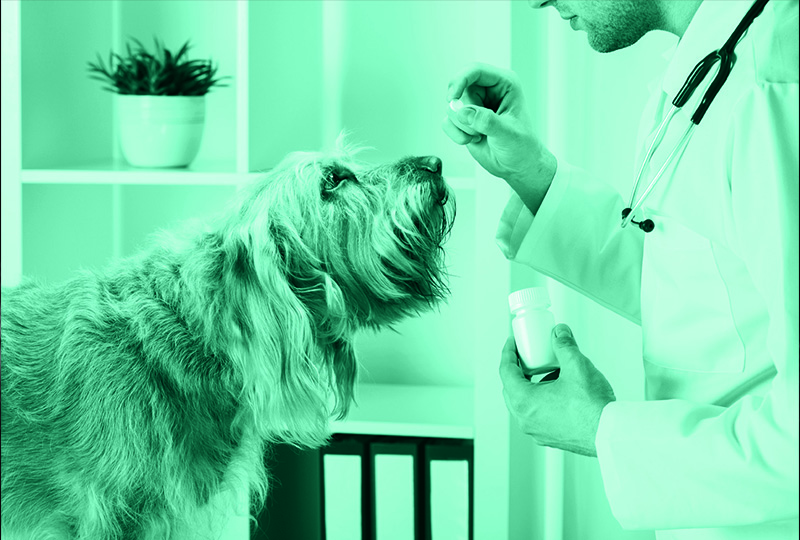 Originally derived from a soil fungus, cyclosporine is a powerful immunosuppressive drug that was initially used in humans to prevent rejection of transplanted organs.1-3

Editor’s Note: This article was originally published in January 2015. Please use this content for reference or educational purposes, but note that it is not being actively vetted after publication. For the most recent peer-reviewed content, see our issue archive.

Commercial cyclosporine is available as 2 different oral formulations: Cyclosporine was initially developed as a vegetable oil-based preparation (Sandimmune, novartis.com), but this formulation has very poor oral bioavailability and is not recommended for oral use in dogs.

A subsequent ultramicronized preparation—FDA approved in 1996 (Neoral, novartis.com)—has much more consistent and predictable bioavailability. Atopica, the veterinary equivalent of the Neoral microemulsion preparation, is approved for use in dogs and cats.

The main mechanism of action of cyclosporine is inhibition of T-lymphocyte function. Cyclosporine inhibits the intracellular enzyme calcineurin. Calcineurin inhibitors, including cyclosporine, act by binding to intracellular cyclophilins, which then inhibit calcineurin-mediated production of cytokines, such as IL-2. Because IL-2 plays a key role in the activation and proliferation of T-lymphocytes, inhibition of IL-2 production causes blunting of the immune response.

After oral administration, cyclosporine is absorbed through the small intestinal epithelium. A decrease in oral bioavailability was reported when the veterinary formulation was administered with food to dogs, which led to recommendations that the drug should be administered 2 hours before or after feeding.4,5

Once cyclosporine reaches systemic circulation, it distributes widely but accumulates in the skin, kidneys, liver, and fat of dogs.6 Peak blood concentration in dogs generally occurs about 2 hours after oral administration of the veterinary formulation, with a rapid decrease in blood concentrations then occurring over the remainder of the dosing interval.

Metabolism of cyclosporine occurs in the small intestine, kidneys and, particularly, liver. In dogs, hepatic cytochrome P-450 3A provides the key metabolic pathway. A number of drugs can alter cyclosporine metabolism by affecting the hepatic P-450 enzyme system (Table 1). 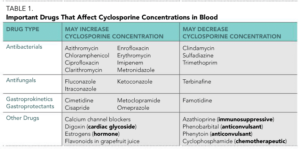 Concurrent infections have been documented in patients receiving cyclosporine therapy, and lymphoma has occurred in conjunction with use of cyclosporine.10 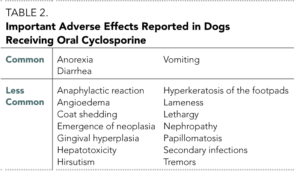 The safety and efficacy of cyclosporine has not been established in dogs less than 4 pounds in weight or less than 6 months of age; it should be avoided or only used cautiously in these patients. Although nephrotoxicity has not been reported in dogs receiving standard therapeutic doses, cyclosporine should be used cautiously in patients with renal failure.

Cyclosporine could potentially impact vaccine efficacy due to its ability to dampen the immune system.11 Vaccine approval studies utilizing a killed rabies vaccine have documented adequate antibody titer responses in dogs even when high cyclosporine doses were administered. While vaccine efficacy has been documented in humans receiving cyclosporine,12,13 similar studies are not available in dogs. Therefore, solid recommendations are not available.

HPLC is considered the gold standard for measuring cyclosporine blood concentrations, and can distinguish the parent drug from its metabolites. It is often only used for research purposes rather than routine patient monitoring.
In contrast, RIA measures the metabolites as well as the parent drug without distinction. Therefore, blood cyclosporine concentrations will be higher by a factor of 1.5 to 1.7 compared with the same sample analyzed using HPLC.4 RIA is the method most often employed for clinical patients and the laboratory performing the assay typically provides their therapeutic ranges.

Pharmacodynamic assays, which investigate the drug’s effect on target cells, have been extensively studied in human medicine. At Mississippi State University, research14 evaluating T-cell responses to cyclosporine—in normal dogs as well as clinical patients—has confirmed that canine responses are comparable to those seen in people. This assay is now offered nationally for use by veterinarians to help determine dosage needs for individual patients. More information can be obtained at cvm.msstate.edu/animal-health-center/pharmacodynamic-laboratory.

Atopic dermatitis is common in dogs and associated with IgE antibodies that target environmental allergens.15 Atopy is the only condition in dogs for which Atopica is FDA approved. Multiple studies have confirmed that an initial starting dosage of 5 mg/kg PO Q 24 H helps successfully manage the majority of dogs with atopy.15-17 Therapeutic drug monitoring of cyclosporine in dogs being treated for atopy is not typically recommended.

Inflammatory bowel disease (IBD) is one of the most common chronic gastrointestinal diseases in dogs, with clinical signs often including vomiting, diarrhea, and weight loss.19 Cyclosporine has been shown to be effective as a sole drug therapy for IBD in most dogs.20 We typically begin cyclosporine therapy at 5 mg/kg PO Q 12 H or 24 H for treatment of IBD. Measuring cyclosporine blood concentrations in dogs being treated for IBD is not typically recommended.

Immune-mediated hemolytic anemia (IMHA) and immune-mediated thrombocytopenia (IMT) are life-threatening blood disorders that often require significant immunosuppression to attain disease remission. Cyclosporine can be utilized for treatment of both IMHA and IMT.

Cyclosporine is typically initially dosed between 7.5 to 10 mg/kg PO Q 12 H, with measurement of cyclosporine blood concentrations employed to ensure adequate immunosuppression. Unfortunately, for both of these diseases, an insufficient number of cases have been published to assess response to cyclosporine therapy.

In dogs, cyclosporine is an immunosuppressive agent used to treat a variety of diseases. Significant variations in absorption and clinical efficacy can be seen between patients. With life-threatening immune-mediated diseases, higher dosages of cyclosporine are often utilized, along with therapeutic drug monitoring to ensure that adequate blood concentrations are achieved. With milder diseases, such as atopy, cyclosporine is usually administered at the recommended dosages, with individual treatment responses used to determine subsequent dose adjustments.

Overview of Clinical Use of Cyclosporine

Individual responses to cyclosporine are quite variable, both in dogs receiving the same standard oral dose as well as in dogs with oral doses adjusted to attain comparable blood concentrations. Given this high degree of variability, cyclosporine dosing protocols should be tailored to the individual dog.

In our opinion, canine dosing protocols of oral cyclosporine for the treatment of non—life-threatening skin and gastrointestinal diseases should be quite different from protocols used in patients with more acute and life-threatening immune-mediated diseases.

Since recent pharmacodynamic studies showed that some dogs can have significant suppression of T-cell biomarkers when administered low dosages of cyclosporine,14 clinicians should remain vigilant for signs of systemic infection.

In dogs being treated for more acute and life-threatening diseases, such as IMHA and IMT, cyclosporine therapy must be utilized to attain effective immunosuppression as quickly as possible. To ensure adequate immunosuppression and proper treatment, measuring blood cyclosporine concentrations and/or performing pharmacodynamic testing is strongly recommended in patients with life-threatening diseases.

Cyclosporine is expensive, which tempts clinicians to explore cheaper forms of the drug. In human medicine, there are many generic microemulsion preparations similar to Neoral, and these preparations are shown to have therapeutic equivalency. Similar studies have not been performed in dogs, but a single published study reported that generic cyclosporine was effective in reducing the severity of clinical signs of canine atopic dermatitis, although blood drug concentrations were not evaluated.21

In our experience, there appears to be marked variability in the oral bioavailability of generic products in individual dogs. Use of generic products, particularly in patients with life-threatening disease, can, therefore, place our patients at risk of therapeutic failure. In our opinion, the FDA-approved veterinary product remains the preferred cyclosporine formulation for use in dogs.