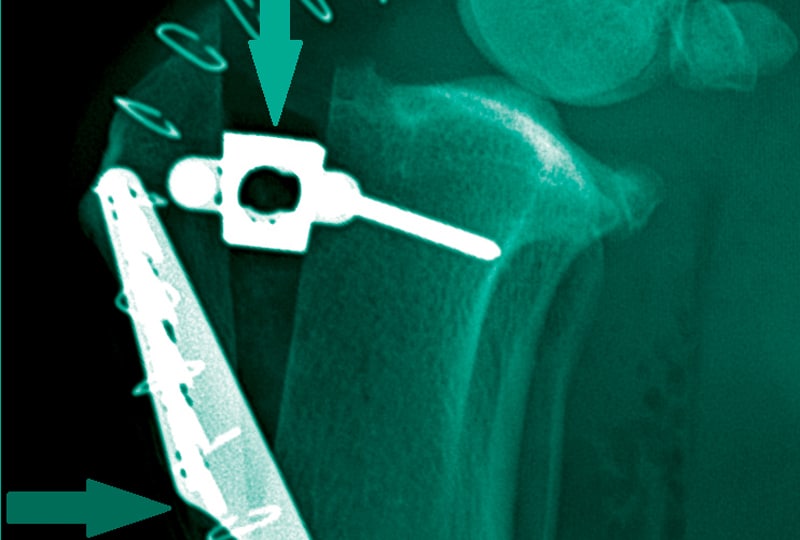 This is the second article in a 2-part series on canine cranial cruciate rupture. The first article—Canine Cranial Cruciate Disease: Updating Our Knowledge about Pathogenesis and Diagnosis—was published in the July/August 2013 issue of Today’s Veterinary Practice.

Canine cranial cruciate ligament rupture (CrCLR) has long been recognized as a surgical disease. Of large breed dogs with CrCLR, 81% to 100% remain lame unless surgical correction is performed. In small dogs (< 10 kg) and cats, exercise restriction, weight loss, and physical therapy have been recommended for treatment of CrCLR, with reported lameness resolution ranging from 73% to 90%.

In my experience, however, lameness often does not completely resolve in animals managed nonsurgically, and they frequently return for corrective surgery after prolonged periods of lameness. In my opinion, surgical correction should be offered at the time of diagnosis for all dogs and for cats.

Over the past 50 years, surgical treatment of CrCLR has evolved through a number of procedures, many now obsolete. Techniques no longer recommended in dogs, include:

Currently, the 3 most widely accepted surgical procedures are:3

The goal of TPLO or TTA is to change the biomechanical function of the knee to limit cranial drawer during weight-bearing movement, and TPLO is currently the most commonly recommended procedure by ACVS surgeons for CrCLR therapy in dogs weighing over 60 lb.4 Extracapsular stabilization relies on periarticular fibrosis for long-term stability since no artificial ligament substitute remains intact in vivo over long periods.

A number of extracapsular stabilization techniques have been described and result in normal return to athletic function.

A lateral parapatellar arthrotomy approach to the joint is most common:

Alternatively, isometric placement of femoral and tibial anchorage sites is preferred by some surgeons: 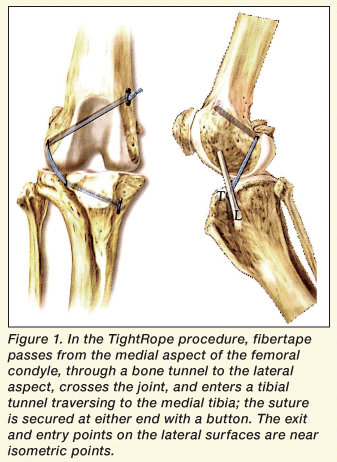 Extracapsular stabilizations result in improvement in 85% to 94% of dogs.5

Lameness may reoccur in some dogs with advancing arthritis or those in which the periarticular fibrosis is not sufficiently strong to limit abnormal thrust when the artificial ligament fails. Based on experience, I instruct clients to expect that 10% to 20% of dogs with extracapsular stabilization will require treatment or reoperation for lameness during their lifetimes, sometimes years after the original surgery.

In one study comparing TPLO and lateral suture stabilization outcomes, there was no difference in objective kinetic parameters at 2 years,8 although a more recent study showed TPLO outcomes were always better than lateral suture outcomes over any time period up to 1 year.9

The complication rate for synthetic monofilament nylon techniques has not been addressed recently in the literature. The TightRope procedure has the best cyclic survival of 4 extracapsular stabilization techniques compared in cadavers, but still developed unacceptable elongation at a median of 11,537 cycles at the lowest peak force of 80N.12 The complication rate of the TightRope procedure has been reported to be 20% (9.9% major) in a multi-institutional study of 1004 patients.13

TPLO has been applied to clinical cases for over 2 decades. Its goal is to reduce cranial tibial thrust in the weight-bearing phase by “leveling” the tibial plateau. Although there are no consistently reported differences in the tibial plateau angle (TPA) of healthy dogs and those that rupture their CCLs, correction of the preexisting TPA acts to biomechanically stabilize the stifle.

In the TPLO procedure:

There are 4 philosophies regarding how to address preexisting joint pathology; however, none has yet proven superior for recovery of normal function. TPLO may be combined with:

Some surgeons do not use an intra-articular approach or meniscal release procedure at all.

Unlike the TightRope and TTA procedures, TPLO can be performed in dogs with TPAs over 30 degrees, and in dogs with angular and torsional limb deformities. In dogs with complex tibial deformities or exaggerated TPAs, TPLO may be combined with tibial wedge osteotomy.

Multiple studies have compared the TPA of healthy pet dogs to those with CrCLR, greyhounds, and wolves in an effort to determine the effect of TPA on cruciate disease. There is no definitive evidence that the normal range of TPA in these animals affects the likelihood of cruciate rupture.5

In some studies, weight bearing completely returns to normal after TPLO but, in other studies, it has not.14,15

TTA seeks to eliminate cranial tibial thrust by positioning the patellar tendon perpendicular to the shear forces in the stifle and tibial plateau, resulting in the same relative redirection of vector force as the TPLO.

In an objective kinetic gait study, peak vertical forces after TTA were significantly higher at 6 months than preoperative forces, but were 10% lower than in control dogs.18 In a recently published, long-term comparison of TTA, TightRope, and TPLO outcomes, the TPLO and TightRope procedure allowed significantly more dogs to reach full function than TTA.3

A number of other osteotomies for correction of CrCLR are under current investigation, including:20

These all require extensive preoperative planning, are exacting in surgical technique, and none result in better functional outcomes than TPLO or TTA at present.

Stifle joint arthroscopy can be performed prior to, or in conjunction with, definitive surgical procedures to increase the accuracy of:

Arthroscopic surgery is often requested by small animal clients who are familiar with its widespread use in human medicine, but functional benefits to its use in surgery of the canine stifle have yet to be demonstrated.

Use of arthroscopic equipment often increases surgical procedure time and cost to the client. Arthroscopic techniques that replace the canine CrCLR with patellar tendon or synthetic implants have been described and clinically applied, but large clinical studies of outcome measures are presently lacking.

Medial meniscal injuries are common in conjunction with CrCLR, and include:

Injuries can be addressed directly through arthrotomy or arthroscopy, or by combination of a blind meniscal release along with TPLO or TTA. Historically, full or partial meniscectomy that includes portions of dislodged or torn menisci has been recommended, particularly because meniscal suturing techniques are difficult in dogs due to size. Since the development of TPLO, caudal meniscal release has been advocated for dislodged or damaged menisci.

However, treatment of most meniscal injuries, particularly those in the aneural, avascular cartilage regions, has not been proven to result in better long-term outcomes in dogs.

Unless specifically indicated by a meniscal “click” on physical examination, I prefer to avoid arthrotomy and do not address potential minor meniscal trauma.

Surgery should not be delayed in obese patients at time of CrCLR diagnosis; however, weight reduction is recommended for these dogs postoperatively. Optimally, all dogs with OA due to CrCLR should be fed commercial diets high in omega-3 fatty acids for long-term treatment of stifle inflammation and OA.26

Physical rehabilitation may be useful to improve or speed functional recovery in postoperative patients, particularly dogs that remain persistently lame.

After TPLO, loss of motion greater than 10 degrees occurs in 21.8% of dogs, and dogs with decreased range of motion are more likely to exhibit lameness.27 In 1 study of dogs after extracapsular stabilization, 6 months postoperatively, dogs that had a prescribed postoperative rehabilitation program bore more weight on the affected limb than dogs in an exercise-restricted group.28 Physical rehabilitation in the treated group consisted of walking (10 min) and swimming (10 min) twice daily during weeks 3, 5, and 7 after surgery.

Analgesics are necessary in the postoperative period to treat surgical pain, but prolonged carprofen or deracoxib use did not result in improvement of dogs during postoperative rehabilitation compared to those in a placebo group.29,30

Shock wave therapy decreases patellar ligament thickness after TPLO only at the distal quarter of the patellar ligament, so it is only mildly effective as a remedy for patellar tendonitis in TPLO patients.31

Nutraceuticals have not been proven effective as an adjunctive therapy during recovery of TPLO.

There are few published anecdotal reports, but no controlled clinical trials, that support the efficacy of alternative therapies, such as laser, stem cell, or chiropractic therapy for treatment of CrCLR. These treatments should not be recommended at this time for this purpose.

The common course of clinical signs in an untreated dog with CrCLR is obvious lameness after rupture; then improved or mild lameness for a period of 6 to 12 weeks, followed by gradually increasing lameness as secondary OA develops in the stifle. The improvement after initial lameness is often misinterpreted as evidence for efficacy of alternative therapies, when, in fact, it is the natural progression of the disease.

Likewise, claims for postoperative rehabilitation efficacy of various modalities, such as laser therapy and shock-wave therapy, may also be confused with the natural course of postoperative improvement.

TPLO, TTA, and various extracapsular stabilization techniques provide similar, satisfactory outcomes for CrCLR and are currently the most widely-accepted and common treatments. I prefer TPLO without an arthrotomy or meniscal release for the majority of patients that present with:

Based on most reports and clinical experience, TPLO:

Regardless of the technique chosen, extracapsular stabilization techniques or tibial osteotomies should result in 85% to 95% improvement after surgery. No current technique will result in return to normal weight bearing in all dogs, but each technique has been proven to improve lameness and patient comfort for long periods of follow-up in most dogs, and to result in high client satisfaction. No current technique completely halts OA progression.

James K. Roush, DVM, MS, Diplomate ACVS, is the Doughman Professor of Surgery at Kansas State University College of Veterinary Medicine. He obtained his DVM from Purdue University and completed a small animal surgical residency and MS degree at University of Wisconsin–Madison.