Cranial cruciate ligament rupture is not only the most common cause of hindlimb lameness in dogs, it is also the most common misdiagnosed or overlooked cause of canine lameness. This article addresses pathogenesis and diagnosis in a handy question and answer format; a future article will discuss the latest innovations in therapy.

Why Is CrCLR Underdiagnosed So Frequently?

Veterinary school instruction has traditionally emphasized teaching subtle and difficult manipulative physical examination procedures, such as cranial drawer sign and cranial tibial thrust, to definitively diagnose CrCLR. Cranial tibial thrust is the stifle vector force created by the dog when weight-bearing, which results in cranial translation of the tibia with each step in a dog with CrCLR. The correct performance of either test is a learned skill, mastered only after much experience and practice on healthy dogs as well as those with partial or complete CrCLRs.

Immature dogs are often misdiagnosed with CrCLR because they have greater than expected cranial drawer sign due to normal puppy laxity. Lameness in immature dogs is rarely due to CrCLR because young ligaments are often stronger than bone physes and fracture occurs first. CrCLR can occur in young dogs but the history usually includes severe trauma, such as vehicular trauma.
Even with 25 years of experience as a veterinary orthopedic surgeon, I would estimate that examination with the cranial drawer sign or tibial thrust allows me to diagnose CrCLR in only about 80% of the dogs that subsequently undergo surgery, even though virtually 100% of these dogs have visible cruciate damage at arthrotomy.

How Can Clinical Detection Be Improved?

Extension & Range of Motion. Dogs with CrCLR often show pain during extension of the hip: it is a common error to inadvertently extend the stifle while extending the hip, resulting in stifle pain misattributed as hip pain. On the other hand, many dogs with CrCLR are not overtly painful during non–weight-bearing stifle range of motion or palpation, further complicating lameness localization.

Medial Buttress Sign. All veterinarians should learn and recognize the appearance of the medial buttress sign. Shortly after CrCLR, most, if not all patients, develop a distinct, firm swelling over the proximo-medial tibia in the region of insertion of the medial collateral ligament (Figure 1).

Is a reliable clinical sign of cruciate rupturePalpation of a medial buttress over the proximal tibia of the affected leg: 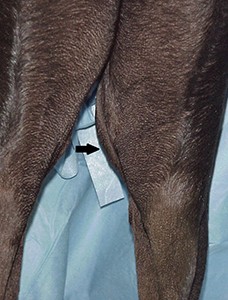 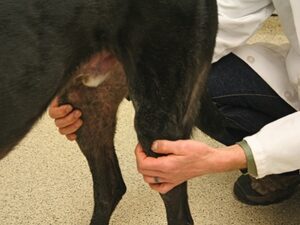 Figure 2. To evaluate medial buttress, the dog should be standing and the examiner should simultaneously reach around the cranial aspect of both stifles and palpate the proximal-medial tibia.

In patients with suspected bilateral CrCLR, remain aware that a bilateral medial buttress will be present and must be considered during diagnosis.

What Role Does Radiography Play in Diagnosis?

On orthogonal stifle radiographs, the following findings are highly suggestive of CrCLR (Figure 3): 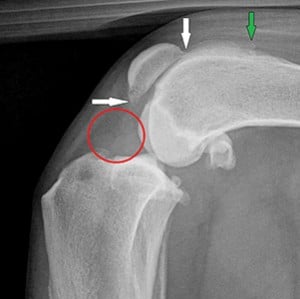 Either finding alone is sufficient indication for joint arthrocentesis, arthroscopy, or arthrotomy for further diagnosis and treatment.

Increasing severity of radiographic signs of OA is an even stronger indication for further diagnostic attention and treatment. Other less frequent causes of joint pathology, such as septic arthritis, distal femoral osteochondritis dissecans, or chronic fracture, can cause similar radiographic changes; however, their relative rarity and differing clinical histories make inadvertent surgery of these conditions unlikely.

Severity of OA is not of value in treatment determinations because OA scores are not related to kinetic gait parameters and lameness in dogs.4

Are Certain Breeds Predisposed to CrCLR?

Our understanding of CrCLR remains a chicken-or-egg-first quandary. Recent information suggests that CrCLR disease is heritable as a recessive trait in certain breeds, such as Newfoundlands, in which there is an identified heritability index of 0.27.5

How Does a Rupture Develop?

What Are the Risk Factors for CrCLR?

Degeneration of the CCL is associated with:7

In some studies8,9 but not others,10,11 degeneration of the CCL has also been associated with:

How Likely Is Rupture of the Contralateral CCL?

In one study, 48% of Labrador retrievers ruptured the contralateral CCL within a median time of 5.5 months.12 Therefore, it is prudent to warn owners of large breed dogs with unilateral CrCLR that these dogs have a high probability of contralateral CrCLR.

TPA is not a useful predictor of contralateral CrCLR in dogs with existing unilateral CrCLR.13 Consequently, any measures that decrease stress on the remaining intact ligaments are important therapy additions, including careful weight management of the patient and exercise restriction.

What Is the Focus of Current Research Efforts?

A great degree of research effort has been directed at understanding and comparing changes in the extracellular matrix of ruptured ligaments and cytokines in stifles affected by CrCLR versus intact ligaments, but few findings have been relevant to prevention or treatment of ligament rupture.

Findings of recent in-depth summaries19,20 on the pathogenesis of CCL disease and those of future studies may ultimately lead to better anti-inflammatory joint therapies and shed some light on disease progression and prevention. Surgical intervention after CrCLR will still be a necessary part of therapy for the foreseeable future.

State-of-the-art treatment considerations for CrCLR will be discussed in the second article in this series, Canine Cranial Cruciate Disease: Updating Our Knowledge about Therapy & Prognosis.

James K. Roush, DVM, MS, Diplomate ACVS, is the Doughman Professor of Surgery at the Kansas State University College of Veterinary Medicine. Prior to his current position, he was a clinical instructor at the University of Wisconsin–Madison School of Veterinary Medicine. His research interests include osteoarthritis therapy, gait kinetics, and canine fracture healing. Dr. Roush received his DVM from Purdue University; then worked in private practice before completing a small animal surgical residency and MS degree from University of Wisconsin–Madison.