Feline Giardia duodenalis infection can be found in every region of the U.S.

Dr. Saleh is a postdoctoral research associate at Texas A&M College of Veterinary Medicine & Biomedical Sciences. Prior to joining the laboratory in 2021, she served as a veterinary parasitology lecturer at Oklahoma State University and project leader for the National Center for Veterinary Parasitology. Originally from east Tennessee, she earned a bachelor’s degree in animal science from the University of Tennessee in 2011 and a PhD in veterinary parasitology from Virginia Tech in 2017. Her doctoral research focused on the detection and genotypic characterization of Giardia in companion animals. Her research interests include diagnostics and zoonotic parasites.

Giardia duodenalis is a protozoan parasite that commonly infects a variety of mammals, including cats, dogs, and humans. Giardia is a species complex comprising at least 8 genetically distinct but morphologically identical assemblages (designated A through H), with cats most often infected with assemblage F.1,2 Giardia is potentially zoonotic, as animals sometimes harbor assemblages A and B, which more commonly infect people,1 but there have been no reports of humans in the U.S. infected with the host-adapted assemblages of Giardia from cats (F) or dogs (C and D). Feline Giardia infections can be subclinical, but the most common clinical sign is diarrhea.3 Historically, Giardia infections were diagnosed via microscopic examination of feces, but immunologic assays that detect antigen in the feces are now widely available as point-of-care tests. However, even with improved diagnostic tools, Giardia infections in cats still present a conundrum as treatment is not always 100% effective, reinfection is common, and there are still concerns regarding zoonotic potential.

Giardia is transmitted via the fecal–oral route. Cysts are shed in the feces and are immediately infective when passed. Cysts may be ingested directly from an infected host, in contaminated food or water, or from contaminated fomites within the environment.

Each cyst contains 2 trophozoites, which emerge when the cyst reaches the small intestine (excystation). Trophozoites are the pathogenic stage of the parasite. They reproduce via longitudinal binary fission and either remain free in the lumen or use a ventral sucking disc to attach to the mucosa, causing malabsorption and steatorrhea. Trophozoites undergo encystation, forming new cysts, as they move toward the colon. The environmentally resistant cysts are shed intermittently in the feces. Trophozoites may also be occasionally passed in diarrhea, but they are noninfective and do not persist in the environment.

The prepatent period of Giardia in cats ranges from 5 to 16 days, and cyst shedding is often cyclic.4 It is important to note that pets, particularly cats, may ingest cysts from their contaminated fur during grooming.

Acute or chronic diarrhea is the most common clinical sign of infection and can result in weight loss, with infected kittens failing to gain weight.5 In clinically affected cats, the feces are often soft and pale in color in addition to containing increased neutral fat levels and being described as more malodorous than normal.6

Numerous diagnostic comparison studies have been undertaken to determine the best test (microscopic, immunologic, molecular) for detecting Giardia infections, with one common result—no single test detects all infections.7 The Companion Animal Parasite Council (CAPC) recommendation for detecting Giardia infections in symptomatic cats (and dogs) in practice is to perform a direct smear and a centrifugal fecal flotation in conjunction with a veterinary-approved sensitive and specific patient-side antigen test.8 This combination of diagnostic tests maximizes the chances of detecting Giardia.

Diagnosis of Giardia via microscopy alone is difficult for a variety of reasons: cysts are small (10 to 12 µm in length; FIGURE 1), shed intermittently, are transparent, and are fragile in flotation solutions.7,9 In routine practice, antigen tests for use in humans should not be used for cats or dogs, as they are not optimized for or approved for clinical use in animals. 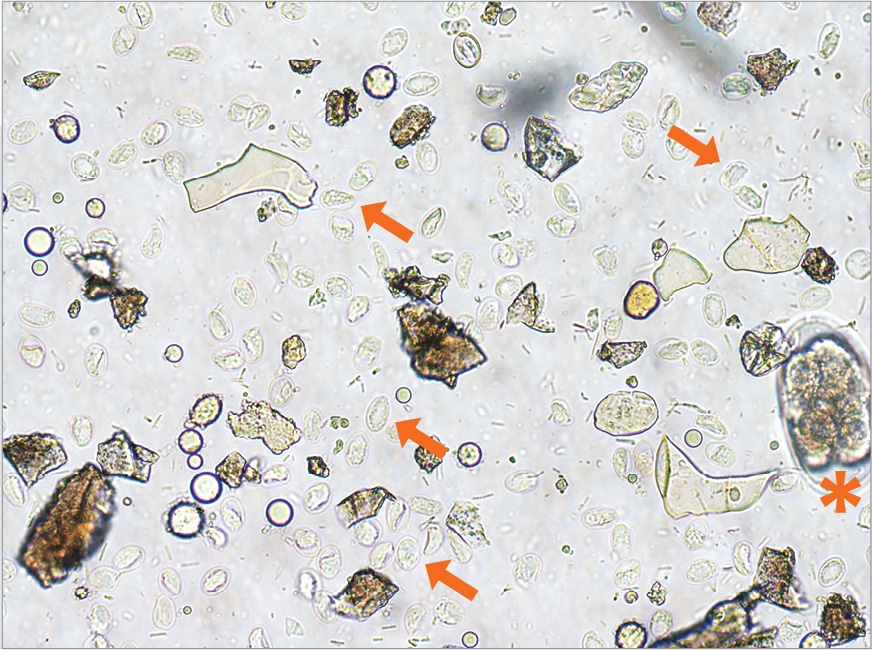 Molecular testing to detect Giardia DNA in feces is available at reference laboratories and some university laboratories, but it is generally more expensive than performing or sending out a fecal flotation or using a patient-side antigen test. The polymerase chain reaction (PCR) tests available at commercial laboratories do not generally include genotyping or sequencing to determine the assemblage of Giardia present.

It is particularly important to note that patient-side antigen tests should be used only in patients that are symptomatic (intermittent or consistently diarrheic), per CAPC recommendations. Follow-up testing with centrifugal fecal flotation, not an antigen test, should be performed within 24 to 48 hours after completion of therapy if clinical signs have not resolved.8 The timing of follow-up testing is critical because the prepatent period of Giardia in cats is as short as 5 days,4 and it is imperative to test before that time has passed. Often, what is suspected resistance or treatment failure is actually reinfection, and the source of infection cannot be determined if follow-up testing is done 5 or more days later.

Giardia has a worldwide distribution and is found in every region of the U.S. The prevalence of Giardia infection among cats varies greatly depending on the population (e.g., individual pets, group-housed pets, breeding colonies, shelter animals, stray animals), geographic location, and the diagnostic method used.

For example, in a survey that used a patient-side antigen test in symptomatic cats from throughout the U.S., 10.8% (512/4977) of cats were positive for Giardia.10 Another survey identified Giardia infection in 31% (36/117) of tested cats from international catteries.11 In 2020, the national prevalence of Giardia in cats in the U.S. was 4% (FIGURE 2).12 These data were generated by the CAPC from more than 1.8 million feline fecal samples tested for the presence of Giardia by reference laboratories. But as they do not include cats not taken to the veterinarian or stray cats, and not all veterinary clinics use reference laboratories, 4% can be considered a baseline minimum prevalence in largely asymptomatic individuals. 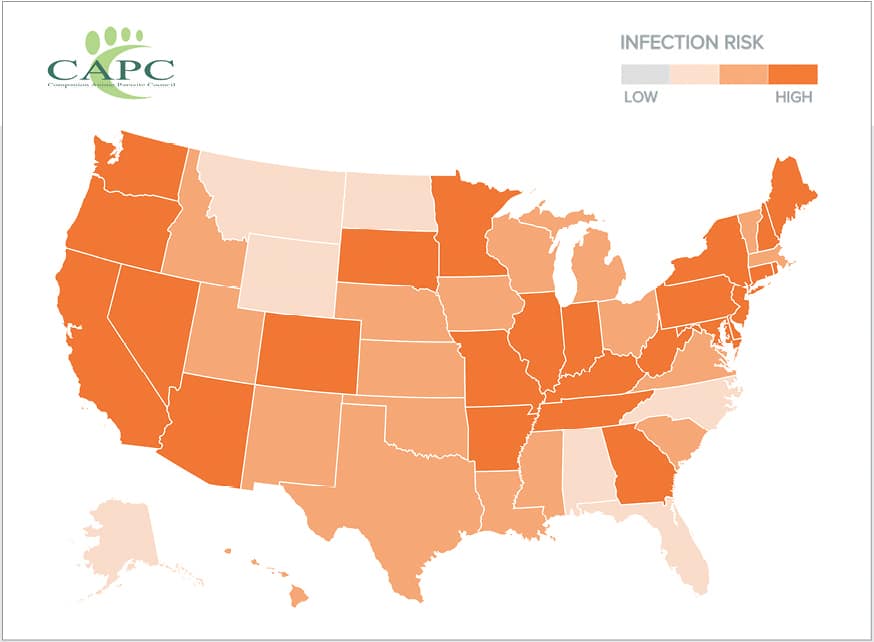 In the United States there is no approved drug for treating Giardia in cats. However, infections in cats have been treated safely and with varying degrees of efficacy with febantel (which is metabolized to fenbendazole after oral administration), fenbendazole, and metronidazole. Metronidazole (25 mg/kg) administered orally, twice a day, for 5 to 7 days was successful in clearing Giardia infections in adult laboratory-reared cats.13 Febantel (37.8 mg/kg), in a combination product also containing pyrantel (7.56 mg/kg) and praziquantel (7.56 mg/kg), successfully cleared infections in experimentally infected kittens when given for 5 days.14

The CAPC recommends either fenbendazole (50 mg/kg) daily for 5 days or metronidazole (25 mg/kg) twice daily for 5 days to treat Giardia infections in cats.8 However, there are some safety concerns regarding the use of metronidazole in cats, and it should be avoided in pregnant or lactating cats and cats with epilepsy or liver disease.

A pilot study investigating the use of secnidazole (30 mg/kg) in 18 laboratory cats found it was effective in eliminating cyst shedding, but the follow-up period only lasted 8 days.15 Additionally, 11 out of 18 cats exhibited hypersalivation following administration and 4 out of 18 cats had inappetence for 2 days. However, there are some limitations to the study given the small number of cats in each trial and the lack of comparison to either metronidazole or fenbendazole.

Complete elimination of Giardia is difficult because cysts are immediately infective when shed, making reinfection highly possible. Therefore, preventing fecal contamination of the environment is crucial to preventing reinfection. Bathing to remove fecal debris containing cysts from the fur is recommended.16,17 Disinfection of the cattery or home, including crates, litter boxes, and bedding, is also recommended; quaternary ammonium products, boiling water, and chlorine are described as effective against cysts.18

Concern regarding the zoonotic potential of Giardia is focused on assemblages A and B, which infect both humans and animals. Assemblage A has varying zoonotic potential and has been further grouped into subtypes AI through AIV; humans seem to be infected with AI and AII, and animals with AI, AIII, and AIV.1,2 Thus, assemblage AI appears to have the broadest host range.

The Giardia assemblages infecting cats and dogs are generally host adapted and have not been reported to infect people in the U.S.1,2 In pets, these host-adapted assemblages are much more common than any potentially zoonotic assemblages.1,19 However, there are reports of assemblages A and B infecting cats, and it is these cases that pose the greatest zoonotic risk to people. A survey of cats in Virginia found that 22% (12/54) of cats positive for Giardia were infected with assemblage AI.2 Cats infected with assemblage A have been reported in Canada, Italy, Japan, Brazil, and Germany.20-24 In Australia, cats appear to harbor a greater diversity of assemblages, including canine-adapted assemblages C and D.25

To determine the assemblage of Giardia infecting an animal, molecular testing must be performed by a commercial laboratory. The importance of knowing if a cat harbors a potentially zoonotic assemblage of Giardia depends on individual circumstances. It is important to remember that while there are reports of cats infected with potentially zoonotic assemblages, infection with their own host-adapted assemblage F, which has far less zoonotic potential, is most common.1,2,19 The risk of transmission to the owner is therefore very low. In households with a severely immunocompromised person, the risk increases, but it can be decreased by practicing good hygiene for both pets and people.19 Taken together, these factors greatly reduce the need for determining the assemblage of Giardia in every infected cat that comes into the clinic.