The Heartworm Hotline column is presented in partnership between Today’s Veterinary Practice and The American Heartworm Society (heartwormsociety.org). The goal of the column is to communicate practical and timely information on prevention, diagnosis, and treatment of heartworm disease, as well as highlight current topics related to heartworm research and findings in veterinary medicine.

Although heartworm infection is highly preventable, it remains one of the most common diseases veterinary professionals work to prevent, diagnose, and treat. Hundreds of thousands of cases are diagnosed every year. It is estimated that more than a million dogs nationwide are heartworm positive.

Every 3 years since 2001, the American Heartworm Society (AHS) has conducted a nationwide survey of veterinarians to study trends in heartworm incidence. The survey information is used to inform both the veterinary profession and the public about the need for heartworm prevention.

While a number of data points were included in the 2013 Heartworm Incidence Survey, the key takeaway is simple: heartworm disease is essentially everywhere in the U.S. (Figure 1). Heartworm cases were identified in all 50 states, and 3 out of 4 veterinarians diagnosed patients as heartworm positive during 2013. 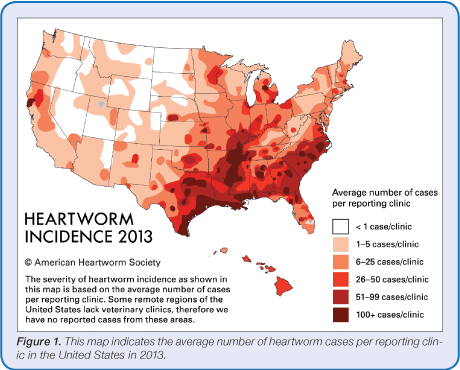 Heartworm incidence calculations were based on the average number of cases diagnosed per veterinary practice. Within most areas, human population numbers were in proportion to the numbers of heartworm-positive dogs: If human population numbers were high, heartworm-positive dog numbers were also high; whereas, the number of heartworm cases in areas with sparse populations were low, with average incidence rates of one case per clinic or less. These areas appear in white on the AHS Heartworm Incidence Map (Figure 1).

While the top 10 states with the highest average rate of heartworm-positive cases per clinic have not changed since the 2010 survey, the order has changed, with Alabama replacing Louisiana as the state with the highest number of cases reported per clinic (Table). 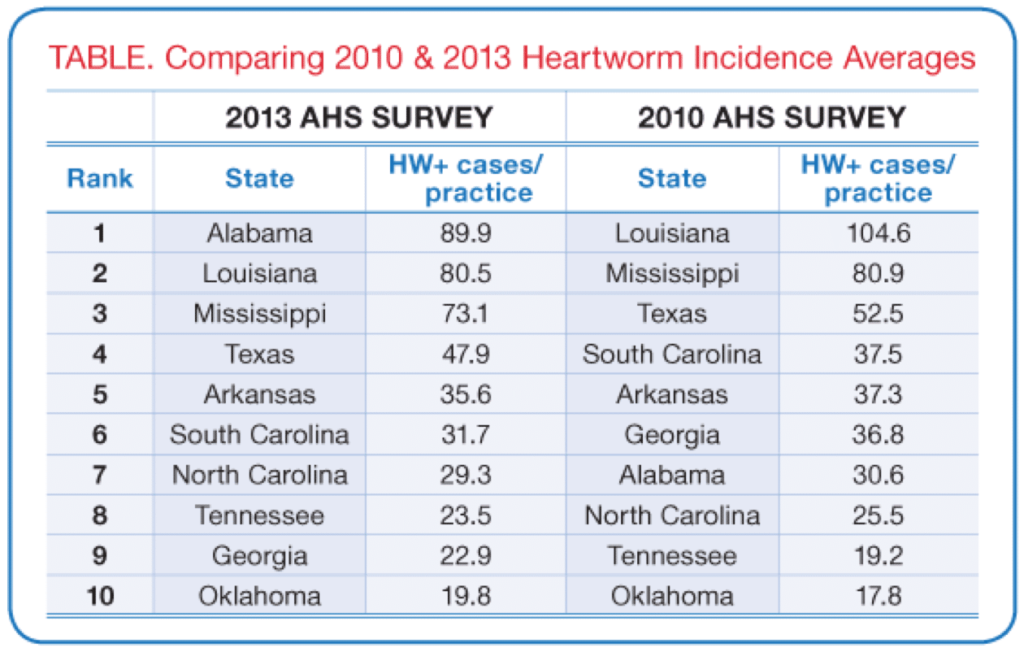 AHS survey administrators analyzing the data believe the differences between 2010 and 2013 could be attributable, in part, to 2009 weather patterns. The summer of 2009 was cooler in many areas of the country, and drought conditions existed in others, leading to a decrease in local mosquito populations.

In addition, economic factors related to the U.S. recession were believed to have altered patient testing patterns.

Significant variation in the rates reported among adjacent counties, communities, and even neighboring practices was noted in 2010. It was not uncommon for a county with several practices to report 100 heartworm-positive patients, while the neighboring county practices consistently reported no cases of heartworm infection. In 2013, the data were more consistent among practices in the same counties and adjoining counties.

Despite the variations in map presentation, the overall incidence of heartworm in the U.S. has not measurably decreased because areas of high incidence had an increased number of cases than in previous years.

Veterinarians who supplied heartworm data were also asked questions regarding trends in heartworm incidence, prevention use, and treatment protocols within their practices (Figure 2). These questions accentuated the following trends. 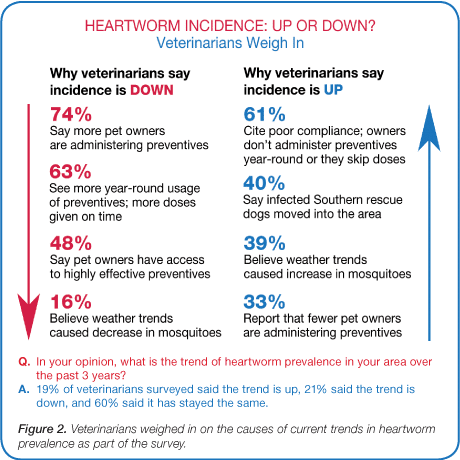 Importance of the Disease

Of the veterinarians surveyed:

Veterinarians who witnessed an upward or downward trend in heartworm disease reported on multiple factors related to those trends. The findings are as follows:

THE ROLE OF RESOURCES

A large majority of surveyed veterinarians (72%) reported that they follow the AHS Guidelines for the Prevention, Diagnosis, and Management of Heartworm (Dirofilaria immitis) Infection, available at:

In addition, 40% of veterinarians use the AHS website (heartworm society.org) as a resource, and another 32% use AHS client education tools, available atheartwormsociety.org/veterinary-resources/order-publications.html.

Heartworm incidence rates remain high in the U.S., but the survey results indicate that the power to significantly reduce disease incidence is in the hands of veterinarians and their clients. Recommendations by veterinary professionals to administer heartworm preventives year-round—and client cooperation in giving these preventives on time and as directed—should be the goal.

The AHS will conduct the next Heartworm Incidence Survey in early 2017 and base the findings on data from the 2016 calendar year. n

Stephen Jones, DVM, is the President of the American Heartworm Society and a general practitioner/practice partner at Lakeside Animal Hospital, Moncks Corner, South Carolina. He received his DVM from University of Georgia. Read more about Dr. Jones at lahmc.com/veterinarians.php.