Many dogs are affected by helminths despite prescribed broad-spectrum parasite control. This article focuses on helminths that affect the gastrointestinal system and highlights the importance of an annual fecal examination.

Helminth parasites are regularly diagnosed in dogs in the U.S (Table 1). Despite approximately 2 decades of excellent anthelmintic therapeutics, large numbers of dogs are still infected with common hookworms, roundworms, whipworms, and tapeworms.1 Many dogs are also affected by helminths that occur locally or sporadically in the U.S. These helminths may not be controlled by the different products available for prescribed broad-spectrum parasite control, which highlights the importance of an annual fecal examination.

While helminths can affect many different systems and organs, such as the heart and lungs, this article will focus on those that affect the gastrointestinal (GI) system.

Distribution. Hookworms are found in dogs throughout the U.S. (Figure 1). Prevalence in the southeast is about twice the national prevalence; numbers are lower than the national average in the southwest and upper Midwest. 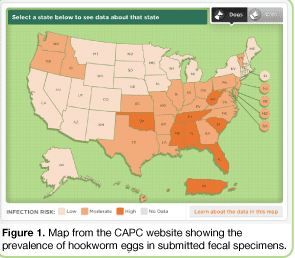 Without immediate intervention, these animals may die. Those that survive usually continue as “poor doers,” with chronic anemia. Respiratory disease and pneumonia may occur in puppies when large numbers of larvae migrate through the lungs.

Diagnosis. Eggs are found in the feces of dogs, and are best identified by centrifugal fecal flotation. The eggs of U stenocephala are larger than those of Ancylostoma species; most laboratories can now distinguish the eggs on fecal examination. 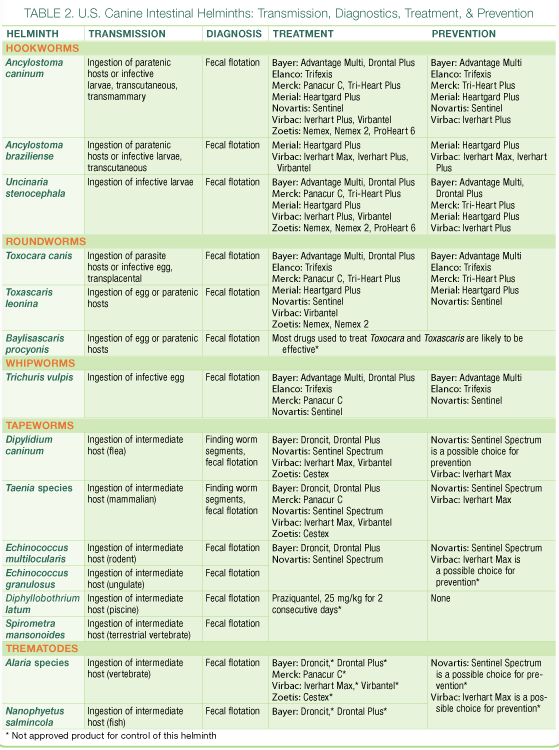 Distribution. As shown in Figure 2, T canis is found in dogs throughout the U.S., with areas in the northeastern and western U.S. above the national average. T leonina is less common, but considered to be more common in the colder areas of the U.S. B procyonis is commonly found in raccoons throughout much of the U.S., but, fortunately, infections in dogs are rare.3 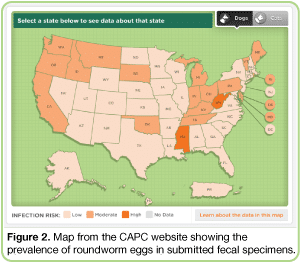 Clinical Signs. Disease caused by infection with T canis is most severe in young puppies, and can occur before eggs are present in the feces. Puppies infected in utero may present with ill thrift, failure to gain weight, and a poor haircoat; a pot-bellied appearance is also common. Those with heavy infections may expel a large mass of worms in vomitus at 4 to 6 months of age, causing the owner distress as the worms are large and usually alive.

Severe infections in neonatal pups can result in acute death at a few days of age because the large numbers of larvae acquired in utero cross the alveoli en route to the small intestine. Adult dogs—even those infected in utero—can be repeatedly infected with adult T canis if the dog is orally exposed to even a few (25–100) infective eggs.

Diagnosis. Eggs are identified in the feces of dogs by centrifugal fecal flotation. The eggs of all 3 species can be readily observed in a fecal sample; the eggs of B procyonis are smaller and darker than eggs from other roundworm species (Figure 3). 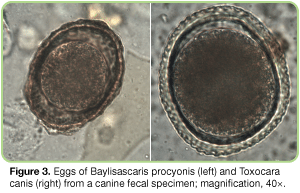 Distribution. T vulpis eggs are found throughout the U.S. (Table 1). Prevalence rates are lower in the north central and mountain states, but T vulpis is present in more than 1% of canine fecal samples from Washington and Michigan (Figure 4). 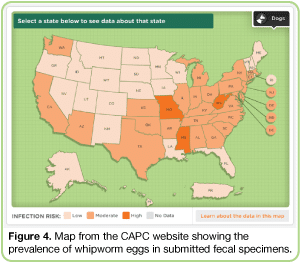 Clinical Signs. Some T vulpis infections result in hemorrhagic typhilitis or colitis, characterized by diarrhea streaked with mucus and fresh blood.2 Severe infections due to the presence of thousands of worms may occur when a dog lives in a highly contaminated area, resulting in bloody diarrhea, weight loss, dehydration, anemia and, in the most extreme cases, death.

Diagnosis. Eggs are identified in the feces of dogs by centrifugal fecal flotation, and require a flotation solution of higher specific gravity than hookworms and roundworms to insure maximal recovery.

Distribution & Transmission. CAPC does not collect data on tapeworm prevalence because the common species found in dogs are unlikely to be diagnosed by simple fecal examination, and fecal flotation alone almost certainly underestimates the frequency of infection. This difficulty is due to the focal distribution of proglottids (and, thus, eggs) in fecal material and the eggs’ weight, which keeps them from readily floating. Even in the presence of infection, a fecal sample may be negative for tapeworm segments—called proglottids—or eggs. Based on various published studies, prevalence of canine tapeworms varies from 4% to 60%.4

D caninum & Taenia species. The 2 most common tapeworms in U.S. dogs and cats are D caninum (associated with fleas) and T pisiformis (acquired from rabbits). Other Taenia species are found throughout North America and may infect dogs that ingest sheep or wild ungulates.4 All Taenia species in North America utilize mammals as intermediate hosts, and dogs as final hosts.

Intermediate hosts of tapeworms become infected from eggs in a dog’s feces.

Tapeworms cause marked thickening of the intestinal mucosa in dogs, and cases of fatal impaction have been reported in young puppies with fleas and massive tapeworm infections. When examined at necropsy, the intestines of a dog with 50 T pisiformis are usually packed to the intestinal lumen’s full capacity.

Infections with S mansonoides have been associated with GI disease in dogs and cats.4 Reported clinical signs include diarrhea, weight loss, and vomiting, which usually resolve following appropriate anthelmintic therapy.

Diagnosis. A D caninum egg packet or taeniid egg in a fecal sample is diagnostic of tapeworm infection, and proglottids can be readily identified as either Dipylidium or Taenia (Figure 5). However, the chances of finding an egg in the feces are minimized because eggs are intermittently shed in segments and are usually too dense to float in common flotation solutions.

The eggs of D latum and Spirometra species are also found in the feces, and resemble a trematode egg (Figure 6). These eggs are shed from the tapeworm strobila within the dog’s intestine rather than being passed in terminal segments. 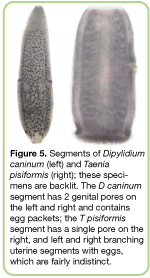 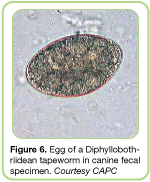 Distribution. Alaria species are found throughout the U.S,6 while N salmincola is found in the coastal northwest.7

Clinical Signs. Alaria alone does not cause signs in dogs. However, dogs that contract N salmincola, especially those new to or visiting endemic areas of Oregon and Washington, may present with fever, diarrhea, and thrombocytopenia, which results from the rickettsial agent, Neorickettsia helminthoeca.

Diagnosis. Dogs become infected with N salmincola by ingesting metacercariae in salmonid fish; these flukes often begin shedding eggs within a short time after infection, and a fecal examination with a direct smear revealing eggs in a dog with clinical signs of neorickettsiosis will help verify the clinical diagnosis.

N salmincola (Figure 7) eggs are small and heavy (they float best in a saturated sugar solution and centrifugal flotation), while Alaria eggs are larger.

Treatment. See Table 2. Tetracyclines are considered the treatment of choice for neorickettsial disease associated with N helminthoeca. Short-acting corticosteroids may be used supportively.

Few things are as disruptive to the human–animal bond as a puppy or adult dog passing a worm in its stool, vomiting a wad of worms, or depositing a tapeworm proglottid on the owner’s lap. Since some intestinal helminths also have zoonotic potential, control and prevention of these parasites are imperative to preserve this bond.

Prevalence. Intestinal helminths are common in all dogs, especially stray dogs and dogs found in shelters. Surveys of shelter dogs in the U.S. demonstrate higher numbers of helminths than the numbers seen in the general canine population.8

Because roundworm and whipworm eggs can persist in the environment for several years, clients need to understand that their pets are at risk for infection when outside. In addition, stray dogs defecating in the yard or park are not receiving treatment and likely infected.

Diagnosis. Dogs should have fecal examinations performed 2 to 4 times during their first year of life and 1 to 2 times per year as adults, depending on patient health and lifestyle factors.

Inform clients that routine parasite control typically results in negative fecal examinations, confirming the efficacy of routine parasite prevention. Other preventive measures they can implement include:

Dwight Bowman, MS, PhD, is professor of parasitology at Cornell University College of Veterinary Medicine. He received his MS and PhD in parasitology from Tulane University.

Tom Nelson, DVM, is co-owner of the Animal Medical Center, Anniston, Alabama. He received his DVM from the College of Veterinary Medicine at Texas A&M University.