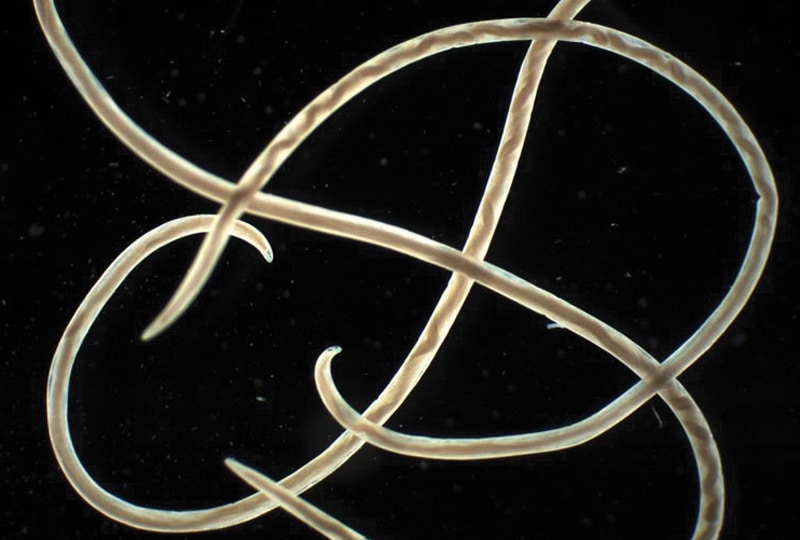 A surprisingly wide variety of helminths damage the pulmonary system of dogs and, at times, can cause severe, life-threatening respiratory disease (Table 1). 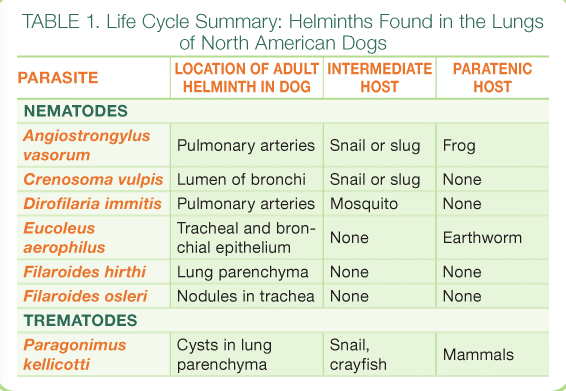 While less familiar than heartworm, infection with these other pulmonary helminths can be very important in some canine patients. This article outlines how dogs become infected and describes appropriate treatment courses to manage the infections.

Distribution. Once considered exotic to North America, A vasorum, commonly known as the French heartworm, has in recent years been found in foxes and dogs in the Atlantic provinces of Canada as well as in the U.S.2

Life Cycle. Dogs acquire infection when they eat infected gastropod intermediate hosts (snails or slugs) or frog paratenic hosts. Upon ingestion, larvae first develop in abdominal lymph nodes before entering the portal circulation and moving to the pulmonary arteries and right ventricle. Once in the lungs, the nematodes mature to adults (Figure 1), mate, and produce eggs that lodge and develop in pulmonary capillaries. Larvae that hatch from the eggs move into an airspace; then are coughed up, swallowed, and passed in the feces. Snails and slugs feeding on the feces ingest the larvae and perpetuate the life cycle.3 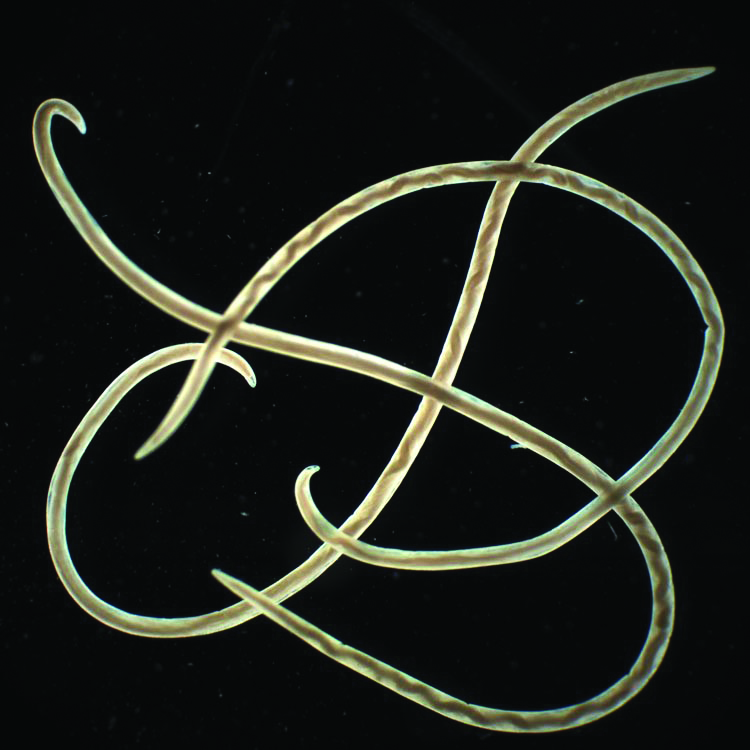 Diagnosis. Larvae can be detected in feces using the Baermann technique or fecal flotation, and are identified by the characteristic kink at the tip of the tail (Figure 2). Radiographic changes associated with A vasorum infection include: 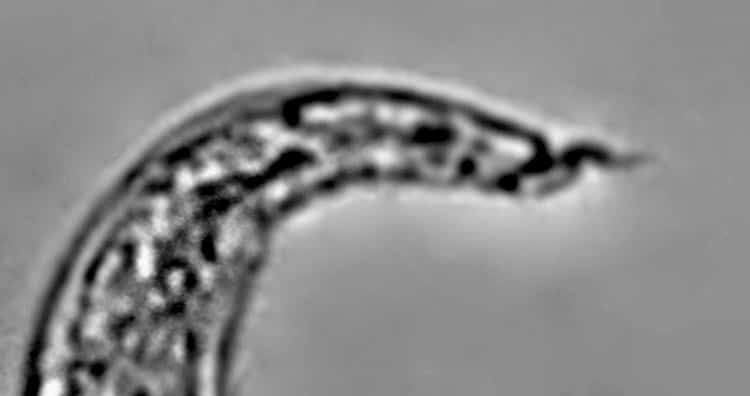 Treatment (Table 2). Infections have been treated with several different types of anthelmintics:

Severe dyspnea and ascites may be seen after treatment; bronchodilators, expectorants, and diuretics may be required to manage these post-treatment reactions.

Prevention. Routine administration of topical moxidectin has been shown to protect dogs from infection with this parasite.5 Dogs can also be protected by minimizing opportunities to consume snails, slugs, and frogs. 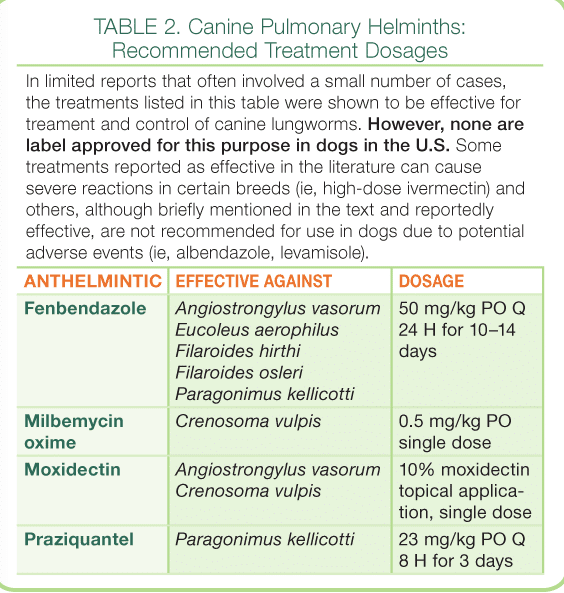 Distribution. This lungworm of foxes and other wild canidae is most common in the northeastern U.S. and the eastern part of Canada.6

Life Cycle. Dogs become infected when, like foxes, they ingest the snail or slug intermediate host. The nematodes migrate to the lungs and develop into adults, moving from the smaller bronchioles to the larger bronchi as they mature.

Clinical Signs. Infections may be asymptomatic or can induce bronchitis and bronchiolitis, resulting in chronic cough.7

Diagnosis. Infection with C vulpis is confirmed by identifying characteristic larvae with a conical head and conical, tapering tail (Figure 3) in the feces, or finding the worms in the bronchi at necropsy. 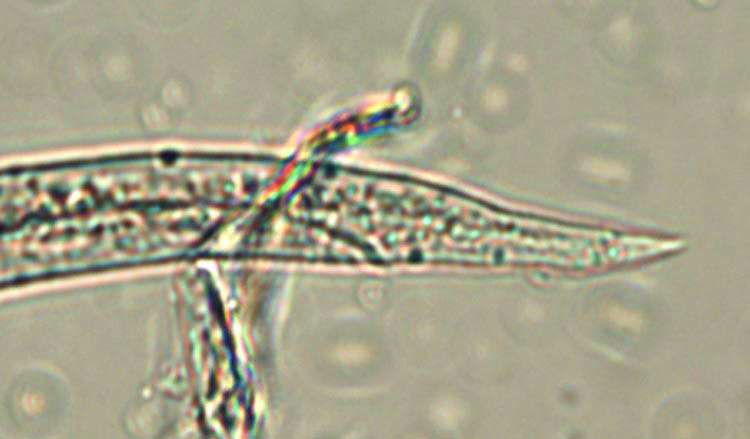 Distribution. Infection with E aerophilus is seen wherever dogs and cats are found, although foxes are considered an important reservoir host.10

Life Cycle. Eggs are shed in the sputum or feces, and embryonate in 30 to 50 days. Larvae are released when eggs or earthworm paratenic hosts are ingested and migrate by the bloodstream to the lungs. The larvae then penetrate the alveoli and migrate up the air passages as they develop. They reach maturity in the epithelium of the bronchioles, bronchi, and trachea, threading their thin bodies through the epithelial surface.1

Clinical Signs. Most infections with E aerophilus are clinically inapparent. If large numbers of nematodes are present, dogs may develop tracheitis, bronchitis and, sometimes, pneumonia,11 which can cause:

Diagnosis. The eggs passed in sputum or feces are characteristic, with polar plugs that are slightly askew of the central axis (Figure 4) and a granular shell. The eggs in the feces of dogs must be differentiated from those of Trichuris vulpis (larger), Eucoleus boehmi (contain a partially developed embryo when passed), and Pearsonema plica (present in feces contaminated with urine).1

Treatment (Table 2) & Prevention. Extended courses of ivermectin or fenbendazole have been reportedly successful at eliminating infection, but anecdotal evidence suggests that routine preventives may not be protective against this nematode. 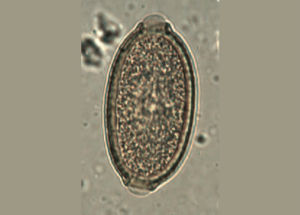 Figure 4. Egg of Eucoleus aerophilus in feces, with typical polar plugs that are slightly askew of vertical between each end.

Distribution. Infection with Filaroides species occurs sporadically, and periodically appears in some kennels or in individual dogs.12

Life Cycle. Larvae shed in the feces or in the respiratory secretions of infected dogs are immediately infective and may be transmitted to other dogs by ingestion; this direct life cycle facilitates rapid spread between co-housed dogs. Ingested larvae migrate to the trachea and develop into adults in nodules (F osleri) or the lung parenchyma (F hirthi).

Clinical Signs. Infection with F osleri can cause a hard, dry cough triggered by exercise or exposure to cold air.12 Young dogs are most acutely affected and sometimes develop respiratory distress, anorexia, and emaciation.

Infection with F hirthi is usually asymptomatic, but fatal cases of hyperinfection have developed in severely stressed and immunodeficient animals.13

Infection with F osleri may also be diagnosed at bronchoscopy by identifying the pathognomonic transparent submucosal nodules containing nematodes. 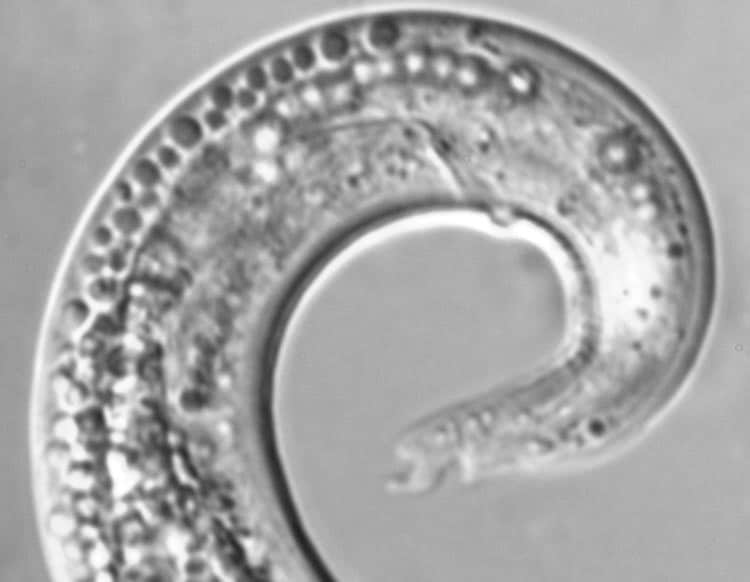 Figure 5. Posterior end of tail of first-stage Filaroides osleri larva in feces, demonstrating the dorsal kink just terminal to the end of the tail.

Treatment (Table 2). The treatment of choice for F osleri seems to be injectable doramectin; some veterinarians also remove as many nodules as possible with the aid of the bronchoscope. Dogs with both F osleri and F hirthi have also been successfully treated with several days of fenbendazole or ivermectin.

Prevention. Because larvae of Filaroides species are immediately infective when shed in the feces, control can be difficult, particularly if other canine members of the household are infected.15

Distribution. Infection with P kellicotti occurs along the Mississippi, Missouri, Ohio, and St. Lawrence rivers and in areas of the southeastern U.S.16

Life Cycle. Eggs passed in the feces hatch to release a miracidium, which penetrates a snail. Cercariae are produced that leave the snail host and enter a crayfish to encyst as metacercariae. When the crayfish is eaten by a dog, cat, other wild carnivore, or a human, adult trematodes develop within cysts in the lung parenchyma. Paratenic hosts that ingest infected crayfish may also harbor infective metacercariae.1

Clinical Signs. Dogs infected with P kellicotti may be asymptomatic or can present with a variety of respiratory signs, including:

Dogs may tolerate a low number of intact cysts, but in heavy infections, or when cysts rupture, severe disease may result due to:17

Diagnosis. Eggs of P kellicotti can be recovered by sugar flotation, sedimentation of feces, or transtracheal wash, and are characterized by their size, seated operculum, and abopercular bump or flange on the end opposite the operculum (Figure 7). Pulmonary cysts may be evident on thoracic radiographs. 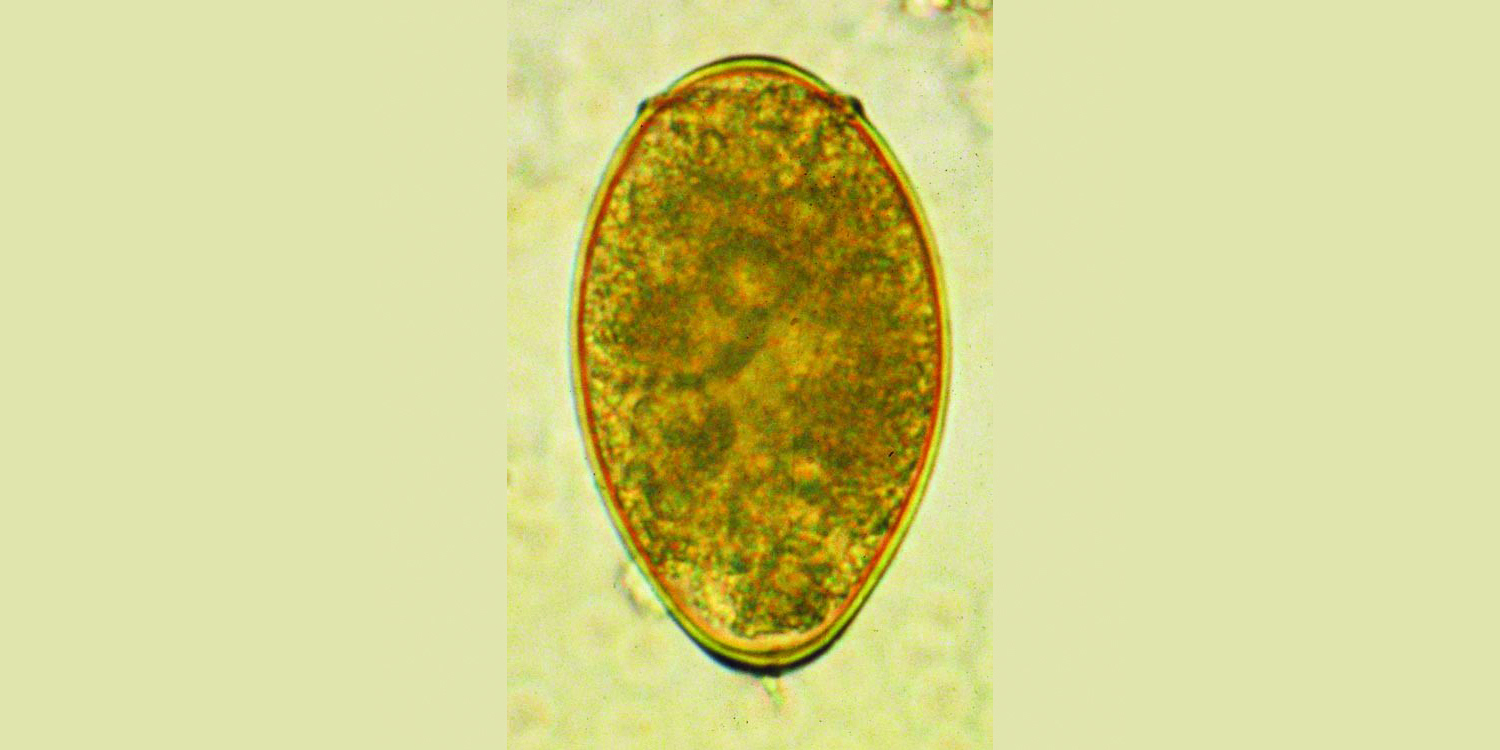 Figure 7. Paragonimus kellicotti egg in feces collected via sedimentation, demonstrating the seated operculum and the abopercular flange or bump.

Treatment (Table 2). Infections may be treated with repeated courses of any of the following:18

Several of the common canine pulmonary helminths are zoonotic, although infections are acquired from the environment or a vector, rather than direct contact with infected dogs.

Other preventive measures that owners can implement include:

Inform clients that routine parasite control typically results in negative fecal examinations, confirming the efficacy of routine parasite prevention. In the case of pulmonary helminths, even though those other than heartworm are not mentioned on product labels, it is very likely that administration of these drugs minimizes the ability of lungworms to develop if the dog is receiving monthly preventive therapy.