A brief review of diagnosis and treatment of the more common tick-borne infections in dogs; plus, some newly recognized infections.

Dr. Starkey earned her BS in Animal Science from the University of Arkansas and her DVM and PhD at Oklahoma State University, where her graduate research focused on vector-borne infections. She completed her residency training through the National Center for Veterinary Parasitology at Oklahoma State University. In 2016, Dr. Starkey joined the faculty at Auburn University, where she is involved in various research projects involving vector-borne and foodborne infections, diagnostic parasitology, and parasite consultation and outreach. Dr. Starkey is also heavily involved in teaching parasitology to first-, second-, and fourth-year veterinary students. 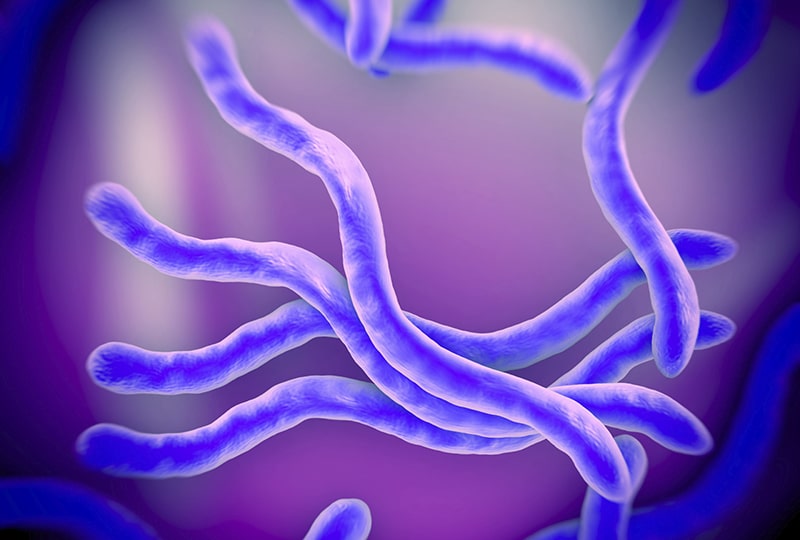 Infections transmitted by ticks are increasingly recognized as important causes of disease in North American dogs. Veterinarians have been combatting canine bacterial and protozoal tick-borne diseases for decades (Table 1). In recent years, however, the geographic range of many of these pathogens has expanded, and several novel infections have been identified, suggesting that the full complement of pathogens transmitted by ticks is more extensive than currently recognized in many regions of North America.

All of these infections share a common link: tick transmission. As a result, tick control for dogs is more important than ever. Following is a brief review of diagnosis and treatment of the more common tick-borne infections in dogs, and a description of some newly recognized infections that may become important for canine health in the future. 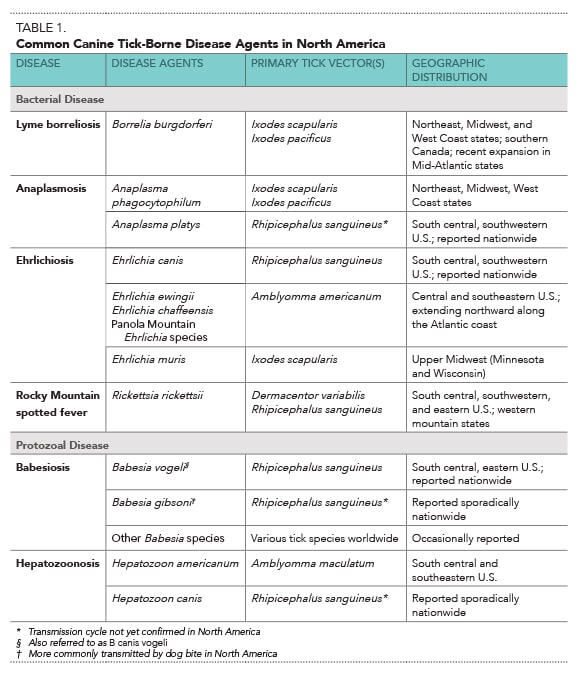 Transmission. Borrelia burgdorferi is the causative agent of Lyme disease in dogs and humans in the United States. Transmitted by Ixodes ticks, infection is most common in the Northeast, Midwest, and West Coast states. In recent years, geographic expansion of the I scapularis/B burgdorferi maintenance cycle has resulted in increasing reports of disease in new regions, including the Great Lakes states, Mid-Atlantic states, southern Appalachia, and southern Canada.1

Presentation. Clinical signs develop in a minority of infected dogs and include fever, lethargy, and shifting polyarthritis. In some cases, potentially fatal glomerulonephritis can develop.2

Diagnosis. Clinical disease, when present, usually develops several months after infection, and serologic testing is the preferred means of diagnosis. However, most seropositive dogs do not appear to develop clinical signs. Some serologic targets are highly specific for B burgdorferi, such as the C6 assay (SNAP 4Dx Plus and Lyme Quant C6 tests, idexx.com), while others, such as immunofluorescence antibody assays, may indicate past or current infection with several Borrelia species, complicating interpretation.3

Prevention. A combination of vaccination and diligent attention to tick control, with risk awareness supported by routine testing, can prevent Lyme disease, particularly in areas where infections are newly endemic.4

How the C6 Peptide Detects Antibody

When B burgdorferi is transmitted to dogs in nature, the VlsE protein is expressed, resulting in production of antibodies that react to the C6 peptide. However, antibodies reactive to the C6 peptide are not produced following vaccination for Lyme disease, which provides a way to identify past or current infection in dogs. It is important to note that, even with this specific assay, a positive result indicates past or current infection with B burgdorferi but does not prove clinical disease.

Transmission. Two Anaplasma species are known to cause disease in North American dogs:5,6

Presentation. Clinical signs of anaplasmosis include fever, lethargy, anorexia, and lameness. Dogs with anaplasmosis often have thrombocytopenia, with low platelet counts more likely to be cyclical in A platys infections. However, as with B burgdorferi, many dogs may be clinically normal despite current infection.5-7 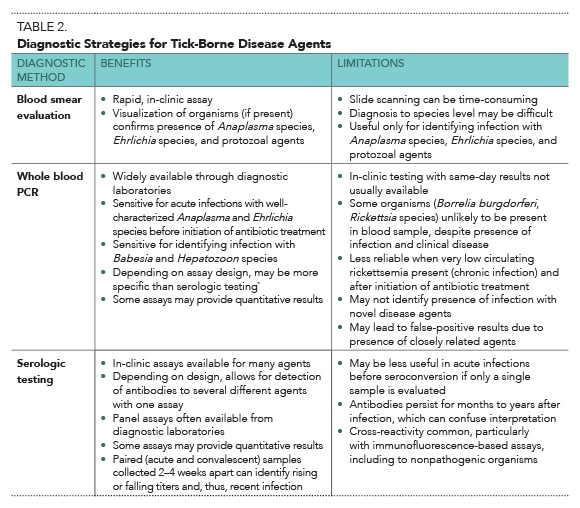 Diagnosis. As with anaplasmosis, diagnosis can be made through PCR, serologic testing, and examination of blood smears; concurrent use of 2 or more methods improves the likelihood of confirming a diagnosis.8,11 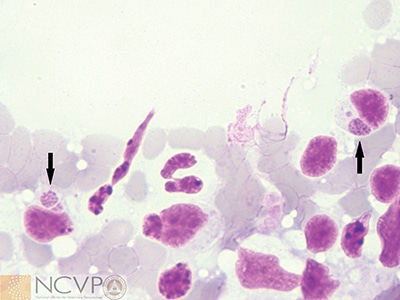 Transmission. Rocky Mountain spotted fever—caused by Rickettsia rickettsii—is considered one of the most serious tick-borne diseases in the Americas due to its high fatality rate and rapid onset. Infection with R rickettsii is most commonly transmitted by Dermacentor variabilis in eastern North America and D andersoni in the Rocky Mountain states, but other tick species, including R sanguineus and Amblyomma species, have been confirmed to also transmit infections in North, Central, and South America.12

Presentation. Clinical signs include rapid onset of fever, lethargy, and anorexia. Thrombocytopenia is often present, and some dogs may develop bleeding diatheses. Neurologic complications occur frequently. Clinical disease, although relatively uncommon, is associated with high fatality rates in both humans and dogs, particularly when treatment is delayed or withheld.13 Prompt, aggressive treatment can result in a rapid response, with resolution of clinical signs within a few days.

Diagnosis. Diagnosis can be confirmed with serologic testing, but treatment should be initiated upon suspicion of infection rather than upon diagnostic confirmation because:8

When presenting and convalescent titers are compared, demonstration of a rising titer can be diagnostic. Serologic assays for R rickettsii are not specific, and when tick infestations are common, many dogs will have antibodies reactive to R rickettsii due to past infection with other, nonpathogenic Rickettsia species. Results of any diagnostic tests should always be interpreted together with clinical presentation.14

Transmission. Many Babesia species cause disease in dogs worldwide. However, the 2 most commonly identified in North American dogs are:

Infection with B vogeli appears particularly common in the southern U.S., where R sanguineus populations are intense; infections are often identified in kennels harboring infestations with brown dog ticks.16

Diagnosis. Infection is usually diagnosed by careful examination of stained blood smears for characteristic large (B vogeli) or small (B gibsoni) piroplasms within red blood cells.15 Serologic testing and PCR are also widely available and can be helpful in identifying chronic and acute infections, respectively. 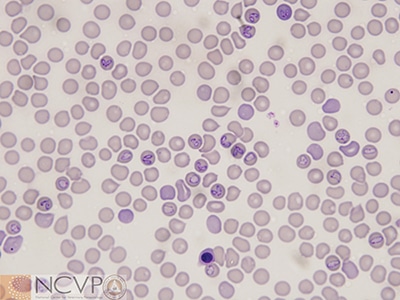 Transmission. The most common and severe cause of canine hepatozoonosis in the U.S. is Hepatozoon americanum, transmitted by Amblyomma maculatum primarily in southern states.18 In recent years, H canis has also been identified in the U.S., although this R sanguineus–transmitted pathogen is more common in dogs in South America, Europe, Africa, and Asia.

Rather than transmission by tick bite, hepatozoonosis agents infect dogs when they ingest a tick containing infective sporozoites during grooming, predation or, in the case of H americanum, when cystozoites are ingested from tissues of rodents or rabbits that have ingested infected ticks.19

Presentation. Dogs with disease due to H americanum usually present with fever, myalgia, muscle atrophy, and poor body condition. Profound neutrophilia is often present, and periosteal bone proliferation may occur.18 Without treatment, body condition continues to deteriorate and many affected dogs die or are euthanized.

Diagnosis. Disease is most commonly diagnosed by whole blood PCR, although gamonts are occasionally found on blood smears (Figure 3). Histologic examination of muscle biopsy specimens is more sensitive than whole blood PCR for diagnosing infection, but less commonly pursued due to the invasive nature of sample collection. Serologic assays to confirm Hepatozoon infection are not available. 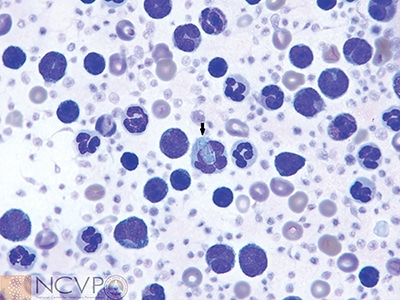 A variety of novel pathogens transmitted by ticks have been described in North America in recent years:

In addition, viral tick-borne pathogens have been increasingly identified in humans.24,25 Heartland virus and Bourbon virus are 2 examples of recently identified, apparently tick-transmitted pathogens in humans, although neither has yet been described in dogs.

When treating dogs suspected of having tick-borne disease:

Treatment of choice for common bacterial tick-borne disease agents is doxycycline. Recommended regimens vary according to the specific target agents, but doxycycline at 10 mg/kg PO Q 24 H for 28 days is effective against B burgdorferi, Anaplasma species, Ehrlichia species, and R rickettsii.5,6,8

Clinical improvement is typically evident within the first week of therapy.6,26 Dogs that do not respond to doxycycline should be carefully re-evaluated for additional etiologic agents. Co-infection with bacterial and protozoal agents is frequent and can be responsible for apparent doxycycline treatment failure in some patients.

Treatment recommendations for canine babesiosis and hepatozoonosis vary depending on the specific agent responsible.

Hepatozoonosis due to H americanum is particularly challenging to treat and requires either:18