Oclacitinib: Treating Pruritus and Beyond

Oclacitinib, a Janus kinase inhibitor, has become an important drug in the management of allergic pruritus.

Dr. Nao Hensel obtained her doctor of veterinary medicine degree from Colorado State University in 2010. She then completed a 1-year rotating small animal internship in Massachusetts followed by a 3-year veterinary dermatology residency in Georgia. A native of Japan, Dr. Hensel subsequently moved to Basel, Switzerland, where she opened a veterinary dermatology practice in 2014.

For years, glucocorticoids and cyclosporine have been used for the symptomatic management of atopic dermatitis, including the associated pruritus. In the past 5 years, however, oclacitinib (Apoquel; zoetisus.com), a Janus kinase (JAK) inhibitor, has become another important drug in the management of allergic pruritus.

Oclacitinib is well tolerated and, compared with “classic” allergy medications such as glucocorticoids and cyclosporine, equally effective in controlling pruritus. Since it became available in 2014, several clinical studies have confirmed its antipruritic effect not only in dogs but also in cats, as well as in other immune-mediated diseases.

Pruritus is a common clinical sign in allergic skin diseases. In atopic dermatitis, it is mainly mediated by a large group of proinflammatory and proallergic Th2 cytokines (e.g., interleukin [IL]-4, IL-5, IL-10, IL-13, IL-31). Many of these cytokines bind to cytokine receptors that have JAK enzymes associated with their cytoplasmic portion. Binding of these cytokines to their receptors activates the JAK-STAT (signal transducers and activators of transcription) pathway, which leads to further cytokine production.1 In recent studies, IL-31 has been shown to play an important role in pruritus, and elevated serum levels of IL-31 have been found in many atopic dogs.2

There are 4 JAK families in mammals: JAK1, JAK2, JAK3, and TYK2.³ Oclacitinib preferably inhibits JAK1 and, to a lesser degree, JAK3, resulting in decreased activity of JAK1-dependent cytokines involved in allergy and inflammation (IL-2, IL-4, IL-6, and IL-13) as well as pruritus (IL-31).4

Allergies are generally managed based on the severity of clinical signs. Allergen avoidance and allergen-specific immunotherapy are measures that address the allergy itself; various drugs are available for symptomatic management. Until recently, glucocorticoids (systemic and/or topical) and cyclosporine have been considered the most effective symptomatic treatment options to manage atopic dermatitis.5 Oclacitinib is now also an effective option (BOX 1).

BOX 1 Benefits of Laser Therapy for Joint Disease
Oclacitinib is available in 3 different tablet sizes: 3.6, 5.4, and 16 mg. Initially, the recommended dose of 0.4 to 0.6 mg/kg should be given twice daily for up to 14 days. Thereafter the dose should be reduced to once daily for maintenance. Some dogs exhibit increased pruritus when the dosage is reduced to once daily. In some dogs, this can be overcome by splitting the total daily dose in half and give twice daily. This regimen may work better because oclacitinib has a short half-life of 4 hours.⁶ Oclacitinib can be given without food and may be discontinued without tapering.

Oclacitinib should not be given in dogs younger than 12 months of age due to an increased risk for activating demodicosis, bacterial pneumonia, and other serious infections. Apoquel should not be used in breeding, pregnant, or lactating dogs.

The efficacy and safety of oclacitinib have been assessed in various studies. In the first 2 randomized, double-blinded, placebo-controlled clinical trials, it was shown that oclacitinib, given at a dose of 0.4 to 0.6 mg/kg q12h, induced a rapid reduction in pruritus and treatment success in 62.3% to 67% of treated cases within 7 to 14 days.7,8 Treatment success was based on reductions from baseline of at least 2 cm on the owner-assessed visual analog scale and at least 50% on the clinician’s Canine Atopic Dermatitis Extent and Severity Index (CADESI-02). Oclacitinib was well tolerated in both studies.

A follow-up study assessed the long-term safety, efficacy, and quality of life of oclacitinib-treated dogs. While efficacy was comparable to that observed in the previous studies, significant positive effects on the dogs’ quality of life were observed in >91.5% of cases after 630 days. Adverse events were reported in less than 5% of dogs, including urinary tract infection, vomiting, otitis, pyoderma, and diarrhea.9 A subsequent study concluded that there is no increased risk for urinary tract infections.10

Comparison and Use With Other Drugs

The efficacy of oclacitinib was also compared to that of other drugs such as prednisolone and cyclosporine. Gadeyne et al compared prednisolone and oclacitinib at recommended doses and found that both drugs resulted in similar rapid effects with regard to pruritus and dermatitis reduction.11 Little et al compared oclacitinib to cyclosporine. Cyclosporine, which is approved for the treatment of canine atopic dermatitis, has an onset of efficacy of up to 4 weeks. The onset of efficacy for oclacitinib is up to 1 week, but Little et al found that after 4 weeks of treatment, both drugs demonstrated comparable control of clinical signs. However, the study showed that cyclosporine caused a 3-fold higher risk for developing gastrointestinal side effects (vomiting and diarrhea) compared with oclacitinib.12

Despite its delayed effects, cyclosporine is still a popular drug to treat canine atopic dermatitis because in some cases it can be dosed every other day or even every third day after initial daily treatment. To overcome its delayed effect, cyclosporine is often initially combined with other drugs such as prednisolone to accelerate the anti-inflammatory and antipruritic effects. Since oclacitinib has been shown to be comparable to prednisolone, oclacitinib can be a good alternative to prednisolone when combined with cyclosporine for initial treatment. In a 3-week trial, the combination of oclacitinib and cyclosporine did not show an increased risk for adverse effects.13

Anecdotal reports indicate that oclacitinib is not very effective in managing recurrent and/or chronic otitis and interdigital furunculosis associated with allergies, and a sudden loss of efficacy is often associated with bacterial or Malassezia overgrowth.14 Sudden withdrawal from oclacitinib can also result in a rapid return of clinical signs, which sometimes appear more severe than before treatment.15

Most recently, it was suggested that the treatment strategy for canine atopic dermatitis might need to be adjusted. Since oclacitinib is a rather weak anti-inflammatory drug, it was suggested that remission of active moderate to severe atopic dermatitis be induced with a course of a broad inflammation-targeting drug, such as a short-acting glucocorticoid, until clinical signs become mild. At that point, the treatment can be changed to oclacitinib. If the patient remains stable and other controlling measures-—such as allergen avoidance, allergen immunotherapy, and preventive topical therapy—have been implemented, the use of oclacitinib can be limited to flare control.16 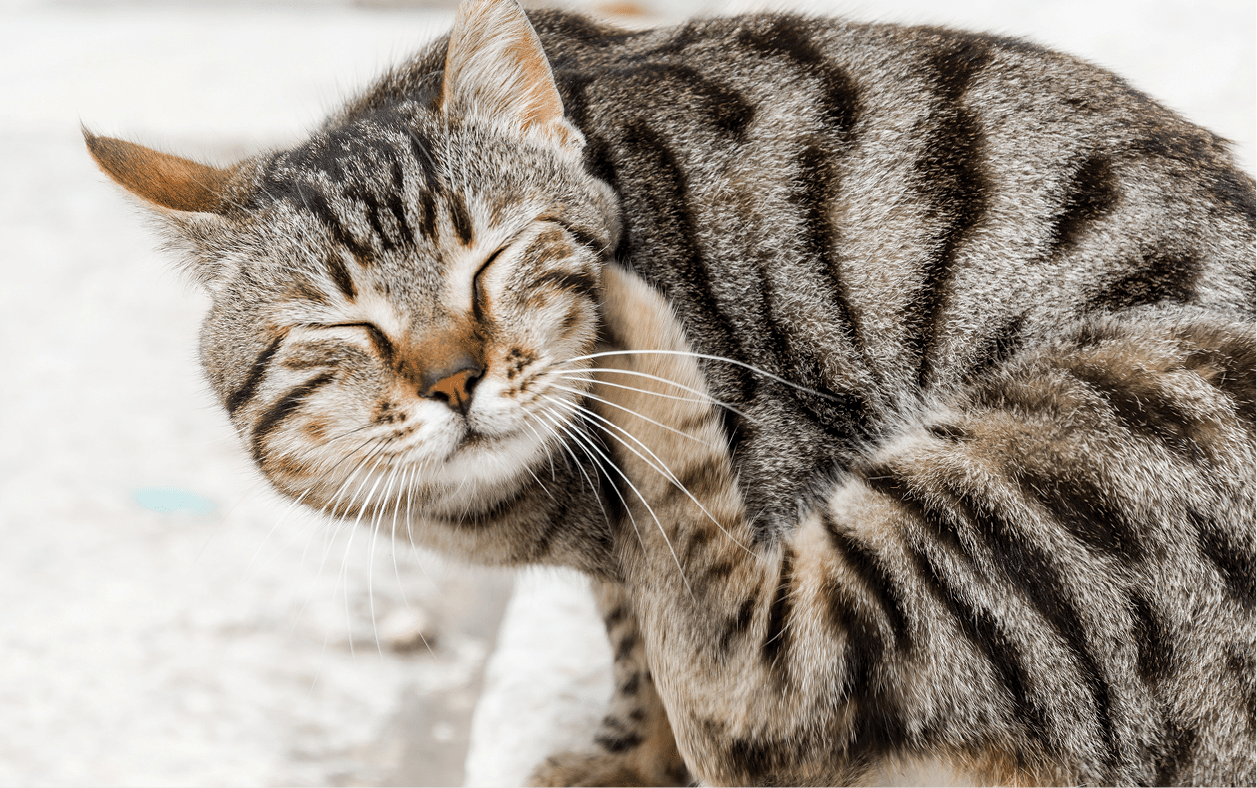 Although oclacitinib is licensed for use in dogs, it has been reported to be effective to treat pruritus in allergic diseases in other species, including cats.17-20 shutterstock.com/Thrithot

Although oclacitinib is licensed for use in dogs, it has been reported to be effective to treat pruritus in allergic diseases in other species, including cats.17-20

In the first pilot study, oclacitinib (0.4 to 0.6 mg/kg, q12h for 14 days, then q24h for 14 days) was used to treat pruritus in cats with non-flea, non–food-induced hypersensitivity dermatitis. This study showed that pruritus was improved in only 42% of the study population; thus, use of oclacitinib in cats did not seem to be as effective as in dogs.17 A follow-up study was conducted with a higher dose (0.7 to 1.2 mg/kg) and a longer induction period (28 days). In this study, 70% of the study population receiving oclacitinib showed improvement in pruritus compared with 75% in a group receiving methylprednisolone.18 Based on this study, a higher dose with a longer induction period seems to be the key to successfully treating feline pruritus with oclacitinib.

Although no studies of pharmacokinetics in cats have been published, oclacitinib is well tolerated and seems to be safe when used in cats at 1 or 2 mg/kg q12h for 28 days.21 Further studies are needed to investigate adverse effects associated with long-term use in cats. However, these studies have shown that oclacitinib can be a good alternative therapy to treat feline pruritus, especially for patients that do not respond to other treatments or do not tolerate steroids. It is important to address that the use of oclacitinib in cats is off-label, and owners should be informed before using oclacitinib in this species.

Recently, one group has looked into immunomodulatory properties of oclacitinib by observing canine T-cell proliferation and cytokine productions in vitro. Interestingly, the results suggest that oclacitinib has immunosuppressive properties, but only at a higher dosage than that approved on the label.30

While oclacitinib is a very effective and fast-acting antipruritic drug, the decision of when to use it depends on various factors. Atopic dermatitis is often a complex disease that requires a multifaceted approach. In many cases, symptomatic therapy alone with drugs such as oclacitinib is insufficient to control allergies long-term. More studies are necessary to confirm oclacitinib’s effects in non-allergic diseases and what other immune-mediated mechanisms may be involved.

18. Noli C, Matricoti I, Schievano C. A double-blinded, randomized, methylprednisolone-controlled study on the efficacy of oclacitinib in the management of pruritus in cats with nonflea nonfood-induced hypersensitivity dermatitis. Vet Dermatol 2019;30(2):110-e30.

24. Vercelli A, Cornegliani L. Use of oclacitinib for the treatment of acral lick dermatitis in a dog: a case report. Vet Dermatol 2015;26:297 (abstract).

A Clinical Approach to Alopecia in Cats