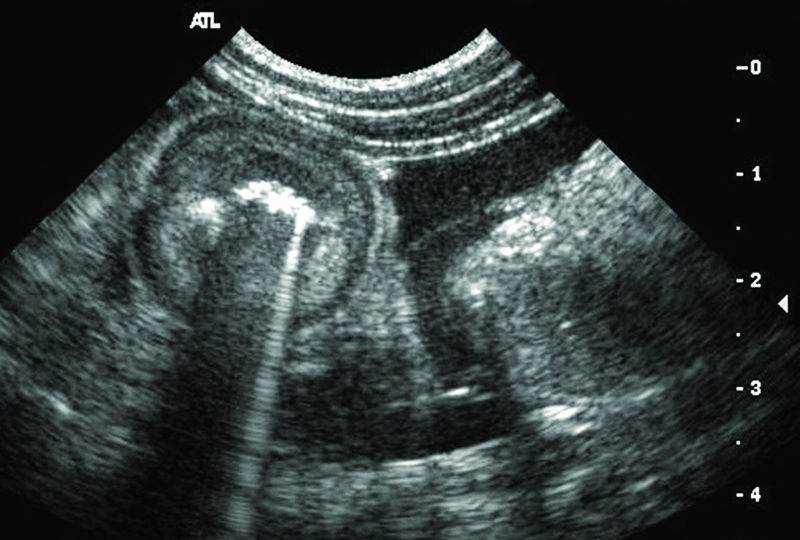 Welcome to our new series of articles on abdominal ultrasonography. The first 3 articles in the series will provide an overview of the basic principles of:

The next part of the series will review a basic approach to the abdomen, using both lateral and ventral scanning techniques, while the final section will address the basic scanning principles for each organ/system in the abdomen, including the:

Abdominal ultrasonography is a noninvasive technique that provides cross sectional anatomy of the organs of the abdomen based on differences in acoustic impedance.

Ultrasound (US) is defined as sound waves with frequencies that exceed the normal hearing range (> 20,000 Hz). Using noninvasive, nonionizing waves of sound propagated into tissues, US creates images of structures in the body that have both static (such as the liver) and dynamic (such as the heart or blood flow in the vessels) components.

Two-dimensional US scanning is a real-time event, with updates of the abdominal images averaging 40 frames per second.

Transduction of US Waves

US waves are produced within the transducer of an US machine (Figure 1). The transducer is used to interrogate the area of interest after a coupling gel has been applied to the skin, and typically, the hair in this area is clipped before the gel is applied. 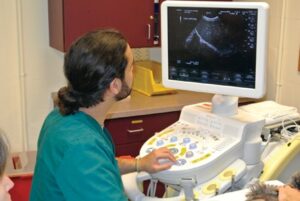 Figure 1. Ultrasound machine, with patient adjacent to sonographer, who is adjusting the machine in order to optimize image quality.

Within the piezoelectric crystals or ceramic of the transducer, energy is converted from electrical to mechanical energy. Piezoelectricity is the electric charge that accumulates in certain solid materials, such as crystals and certain ceramics, in response to applied mechanical stress, which results in short bursts of mechanical energy in the form of US waves.

Parameters of US Waves

The US wave can be drawn as a sine wave—a mathematical curve that describes smooth repetitive oscillation—and is described by the following physical parameter equation:

Speed of sound in the tissue (c) varies between different tissues but is averaged at 1540 m/sec or 1.54 mm/mcsec.

Frequency (f) is the number of times (cycles/sec or Hz) the wave oscillates through the complete sine cycle in 1 second; medical US transducers typically have a frequency between 2 and 20 MHz (1 × 106 cycles/sec).

Wavelength (l) is the distance (mm or mcm) between the peak heights of 2 subsequent sine waves.

TISSUE INTERACTIONs OF US WAVES

There are 5 basic interactions of US waves with tissues.

The US transducers currently used are called broad bandwidth or multifrequency transducers. These transducers support movement of the center frequency among a multitude of different frequencies. For example, a transducer with a range between 6 and 10 MHz may allow central frequency placement at 10, 8, and 6 MHz.

There are 3 different crystal arrays for US transducers (Figure 2): curved, linear, and microconvex-curved arrays. 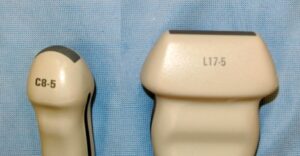 While discussion of all the physical aspects of US transducers is beyond the scope of this article, further information can be found in the Suggested Reading.

US image creation is based on the pulse—echo principle, discussed under Transduction of US Waves. Since the speed of sound in the tissue is known, and the time for an US wave to traverse out and back is known, the distance from the transducer can then be calculated.

Once the number of reflected US waves returned from a given area is calculated, a relative gray scale value is then assigned based on the intensity of the returning signal:

Each US image has a near field, focal zone, and far field (Figure 3): 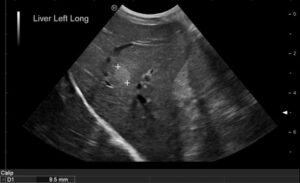 This article has presented the basics of image formation related to the US machine: