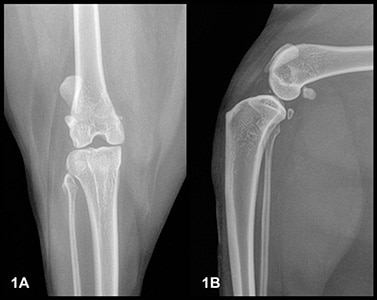 Caleb Hudson, DVM, MS, Diplomate ACVS
Patellar luxation is a relatively uncommon cause of hindlimb lameness in cats. Many clinically normal cats have mild femoropatellar joint laxity, and during orthopedic examination patellar subluxation or even low-grade luxation can often be induced.1 It is important to differentiate these clinically insignificant cases of patellar laxity from cases in which patellar luxation causes hindlimb lameness (Table 1).

Before surgical correction of patellar luxation, obtain mediolateral and craniocaudal projection radiographic views of the affected stifle joint. Evaluate the radiographs for the presence or absence of degenerative changes and joint effusion, as well as the shape and size of the tibial tuberosity (Figure 1). 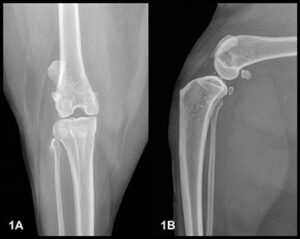 Figure 1. Craniocaudal (A) and mediolateral (B) projection radiographs of a patient with an acute, traumatic lateral patellar luxation. Consistent with the acute onset of clinical signs, minimal degenerative changes are noted in the stifle joint. On the mediolateral projection, a small radio-opaque region is present just proximal to the cranial aspect of the tibial plateau and is consistent with meniscal mineralization. 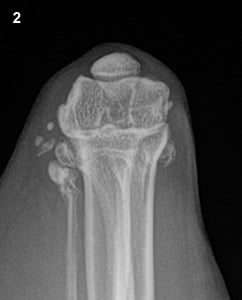 The surgical approach to the stifle joint for correction of patellar luxation is through either a lateral or a medial incision, as described by Piermattei and Johnson.8 I recommend the:

With use of an open arthrotomy approach, if the cranial cruciate ligament is intact, a thorough evaluation of the caudal pole of the medial and lateral menisci is very difficult in the feline stifle. 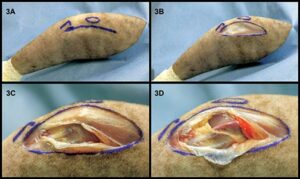 Figure 3. Approach to the stifle joint through a lateral incision. Proximal is to the right and distal to the left in all 4 images.With the patient in dorsal recumbency (A), the landmarks for the lateral approach (tibial tuberosity and patella) have been outlined with a purple marking pen, as has the recommended location of the parapatellar skin incision. The skin incision is created (B), starting just lateral to the tibial tuberosity and extending proximal to the patella equidistant to the distance between the tibial tuberosity and the patella. The skin incision stays several millimeters lateral to the patellar ligament and patella.The fascia lata has been incised on the same line as the skin incision (C). Proximally, the fascial incision curves slightly caudally to avoid the bulk of the vastus lateralis muscle (which minimizes hemorrhage). The joint capsule has been incised on the same line as the skin and fascia lata, exposing the trochlear groove and infrapatellar fat pad (D). 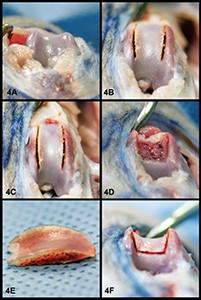 In patients with a shallow trochlear groove (Figure 4A, see SURGICAL APPROACH, Step 5. Evaluation of the Joint), a trochleoplasty procedure is recommended to deepen the groove. The block recession is my preferred technique because it maximizes articular cartilage contact between the patella and trochlear groove, particularly near the proximal and distal ends of the groove.9

To perform the block recession:

To perform a retinacular release:

To reduce parapatellar soft tissue laxity in the joint capsule and muscle fascia opposite the direction of luxation, perform a combination of tissue resection and imbrication. I usually reduce soft tissue laxity while closing my arthrotomy, because I perform the arthrotomy on the side of the stifle on which laxity should be reduced (lateral for a medial luxation and medial for a lateral luxation). To perform this technique: 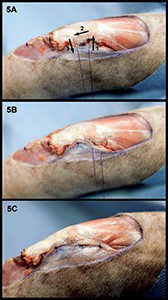 Tibial tuberosity transposition is a surgical technique that moves the attachment of the patellar ligament medially or laterally on the proximal tibia to help keep the patella aligned in the trochlear groove.

To perform a tibial tuberosity transposition: 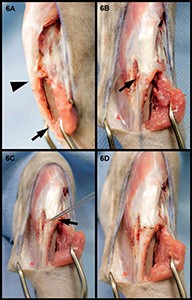 Choosing which of the described surgical techniques to use in a given patient can be difficult. Most patients do not need to have all 4 of the described correction techniques performed in order to achieve appropriate patellar tracking without luxation. My approach is to:

Obtain craniocaudal and mediolateral projection radiographs of the stifle joint (Figure 7) immediately post-operatively and at the 6- and 12-week recheck appointments. The radiographs should be critically evaluated, specifically: 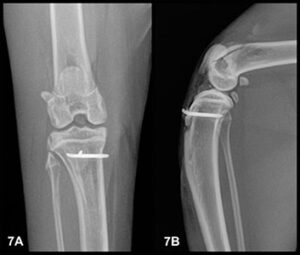 Figure 7. Postoperative craniocaudal (A) and mediolateral (B) projection radiographs of a patient treated with a trochlear block recession and tibial tuberosity transposition to correct medial patellar luxation.

I typically do not place a bandage on the hindlimb, although I do cover the skin incision with an adhesive wound dressing, which I leave in place for the first 3 to 5 days after surgery.

Patients are typically kept in the hospital overnight and discharged the day after surgery. Postoperative activity is limited to strict crate rest for 8 weeks after surgery. Postsurgery recheck examinations are performed at 2, 6, and 12 weeks.

Patellar luxation can cause clinically significant hindlimb lameness in cats. Patients with persistent lameness attributable to patellar luxation should be considered candidates for surgical therapy.

Surgical treatment of patellar luxation is typically a multistep process. The exact techniques required vary from patient to patient. The final decision about which surgical techniques to use in a particular patient is based on intraoperative assessment of patellar tracking in the trochlear groove.

Use of sound decision making and intraoperative attention to detail lead to consistently successful surgical correction of feline patellar luxation.

Caleb Hudson, DVM, MS, Diplomate ACVS, is a surgeon at Gulf Coast Veterinary Specialists in Houston, Texas. His special interests include total joint replacement and minimally invasive surgery. Dr. Hudson received his DVM from University of Missouri, and completed a rotating internship in small animal medicine and surgery, residency in small animal surgery, and MS in veterinary science from University of Florida.