The majority of presterilization litters can be eliminated by performing neutering at 5 months of age rather than 6. In this article, Dr. Speck explains the current state of population control, benefits of early neutering, and implementing the recommendation into your practice. 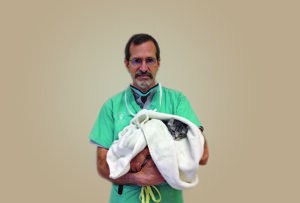 I graduated from veterinary school in 1982. As I look back, I don’t recall hearing the words “pet overpopulation” or “shelter medicine,” which is likely because I was not listening. Most of us were zeroed in on pharmacology, pathology, physiology, and dermatology—and bracketology during March Madness.

As I entered practice, I was informed that the local humane society was overrepresented with irrational people who did not pay their bills. I agreed to a request by the new humane society president to teach two of their veterinary assistants how to draw blood from cats, and I also began to see the world from a somewhat different perspective.

I saw that the tears shed for injured, abused, and homeless animals were not, for the most part, from crazy people, but rather from normal dedicated, hard-working, caring individuals. They did their best without many supplies, no room to spare for animal housing, and little money.

As I gradually became more involved with the local humane society, I realized that no matter how many unwanted pets were given to good homes, the supply of new homeless pets was continually overwhelming. As a result of this hopeless situation, my specialty became pet population control, specifically neutering.

Many terms are associated with surgical sterilization of dogs and cats. While neutering is often associated—especially by the general public—with male pets, it technically applies to both female and male animals. For this article, neutering is used to describe surgical sterilization of male and female dogs and cats—castration and spaying, respectively.

We all understand the importance of neutering to control pet overpopulation, and for years I placed the blame for overpopulation on older breeding females that, year after year, produced litter after litter.

However, a Massachusetts survey found that female cats and dogs that had been sterilized after having at least one litter accounted for 87% of all litters born.1 The researchers found that local reproductive rates were not driven by dogs and cats that remained intact their entire lives; instead, it was the reverse. Cats and dogs that remained intact accounted for < 15% of all litters born.

More than 4 out of every 5 litters were born to female dogs and cats whose owners had them sterilized, but not until they had at least one litter. Pet population rates were not being driven by animals that would remain intact, but rather by those that would eventually be spayed.

The majority of presterilization litters can be eliminated by performing recommended neutering just one month earlier—at 5 months of age rather than 6 months.

A 2009 study of pet owners, conducted by PetSmart Charities and Ipsos Marketing,2 found that 65% of pets were neutered. Of the 35% that were not neutered, 75% of their owners were considering neutering at some point in the future.

The survey found that owners were unsure of the proper time to spay.

The study also found that 10% to 20% of dogs and cats had had litters, half of which were reported as accidental by the owners.2 In another study, 57% of dog owners and 83% of cat owners were unaware of the frequency of heat cycles.3

Pet owners’ general lack of knowledge of the proper time to sterilize their pets undoubtedly leads to accidental litters. Yet, the most common reason for neutering given by owners in the PetSmart Charities/Ipsos Marketing study was to prevent a litter.2

Veterinarians are often the primary source of information for pet owners, and owners in the PetSmart/Ipsos Marketing study indicated that they place a higher level of trust in their private veterinarians than in humane societies or low-cost clinics. Further, a majority of pet owners obtained information about neutering from a veterinarian, as opposed to friends and family, the Internet, or other sources prior to having their pets sterilized.

NEUTERING AT AN EARLY AGE

Clearly, many pet owners are uncertain of when to neuter their pets, but we know that they want to prevent unwanted litters. Private veterinarians have a genuine opportunity to reduce pet overpopulation by instructing their clients to neuter before puberty.

Neutering is known to reduce behaviors, such as aggression, roaming, and urine marking. These undesirable behaviors are some of the most common reasons owners surrender their pets to shelters, and often these behaviors begin after puberty.

Undesirable behaviors, especially urine marking and roaming, may be difficult to stop once they start. Neutering at 5 months, prior to puberty, ensures that cats and dogs do not develop these behaviors as a result of sex hormones, and preventing these behaviors makes it more likely that pets will remain in their homes for the duration of their lifetimes.

I helped our local shelter open a high-volume, high-quality, low-cost neuter clinic in the spring of 2006. To date, we have neutered 90,000 animals, aged 6 to 8 weeks and up. The easiest surgeries are those performed on puppies and kittens 4 to 5 months of age.

While male dogs of some breeds may benefit from delayed sterilization, a majority of female animals—especially cats—benefit from spaying at 5 months of age versus 6 months. It is well-documented that spaying prior to the first heat cycle reduces the risk of mammary cancer, which is 7× more common in intact dogs and cats than sterilized ones.3

In my 24 years of private practice, I have seen many cats and dogs with advanced mammary cancer—the most common cancer in dogs and third most common in cats.3 Owners often ask me if they could have done anything differently. When I tell them spaying before the first heat cycle would likely have prevented their pets’ cancer, owners ask, “Why didn’t my vet tell me about this?”

Spaying at 5 months of age—before the first heat cycle—can prevent this scenario.

The easiest way to move up the age of sterilization of kittens and puppies is to incorporate it into standard vaccination routines.

If clients are instructed to call back to schedule neutering several weeks after the last vaccination series, they may delay surgery until after the pet’s first estrus, increasing not only the chance for accidental litters, but the likelihood of mammary tumors developing later in life.3 Delay also presents an opportunity for the undesirable hormone-driven behaviors mentioned earlier to develop, increasing the chance of a pet being turned in to a shelter.

By encouraging owners to sterilize their pets at 5 months of age, all 3 of these issues can be avoided. If the last vaccination is scheduled to occur between 4 and 5 months of age, neutering should be scheduled at that time or shortly afterward.

Timing of neutering is best determined between responsible pet owners and their private veterinarians.

My request is that we, as veterinarians, consider the devastating effects of waiting too long to neuter an animal. Mammary cancer—which can be prevented by spaying prior to first estrus—leads to premature death in cats and dogs every day. Hormone-related behavioral issues that develop as puppies and kittens sexually mature commonly lead pet owners to part with their pets.

Neutering at 5 months of age not only benefits patients, pet owners, and veterinarians, but it also reduces the number of presterilization litters, which drive pet overpopulation. Lowering the number of presterilization litters by only 35% would stabilize the size of household dog and cat populations in the U.S. by bringing the birth rate into balance with the death rate.5

The rule should be neuter by 5 months of age. Exceptions should come from responsible pet owners consulting with their private veterinarians.

Read our interview with Aimee Gilbreath, the Executive Director of Found Animals (foundanimals.org), about the recent PetSmart Charities North American Spay Neuter Conference(spayneuterconference.com), available in our Article Library at tvpjournal.com.

The Beat the Heat Program—initiated by Marian’s Dream (mariansdream .org), whose mission is to create and support programs to end pet overpopulation—is a 3-part program that serves to:

This program was developed in response to findings that demonstrated, on average, 3 out of 4 people either “were not sure when” to neuter or thought that pets “should be neutered after 6 months of age.” However, there is some debate regarding neutering large dogs before 6 months of age. Therefore, based on the literature and feedback from veterinarians, the program now focuses exclusively on felines, with the tagline Fix by Five.

While age of first oestrus varies by region and day length, the best policy to prevent millions of unplanned kittens is to neuter by 5 months of age, which is a mere 4 weeks prior to the traditional age recommended, and easily fits at the end of kitten vaccination protocols. Benefits include:

Richard Speck, DVM, received his DVM from Iowa State University. He owned a private practice clinic for 24 years before opening a low-cost, high-volume, high-quality spay/neuter clinic with the Animal Protective League in Springfield, Illinois. He has performed more than 40,000 surgeries since the clinic opened in 2006.