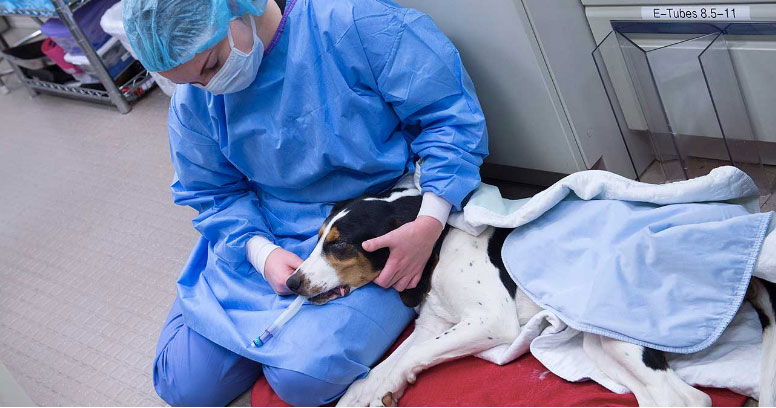 Purdue University’s mobile veterinary service is celebrating a couple of milestones: more than 14,000 spays or neuters of shelter animals and over 100,000 miles traveled since 2012.

The clinic, staffed by veterinarians and fourth-year students from the College of Veterinary Medicine, typically hits the road twice a week, stopping at Indiana animal shelters.

The American Society for the Prevention of Cruelty to Animals estimates that roughly 6.5 million animals enter shelters in the United States each year. Of these, approximately 1.5 million shelter animals are euthanized (670,000 dogs and 860,000 cats).

“When the program was first started, animals would stay for a really long time in shelters,” said Lynetta Freeman, DVM, MS, MBA, a professor of small animal surgery. “That led to behavior problems and other issues that made them harder to adopt. Today, we go to shelters and sometimes we are doing surgeries on animals that are going home the very next day.”

Each student performs an average of 35 surgeries during their three-week, elective rotation, Purdue reported.

“Being able to do that many surgeries is rare,” Dr. Freeman said. “Students who complete this rotation feel much more comfortable after they’re done. If they walk into a clinic on their first day on the job and someone says, ‘Here, go spay this cat,’ they feel confident and prepared to do it right away.”

A Love for Shelter Medicine

“It’s hard to measure, but I think our students walk away with a more philanthropic outlook,” she said. “Being able to give back, and seeing the results, has been good for all of us.”