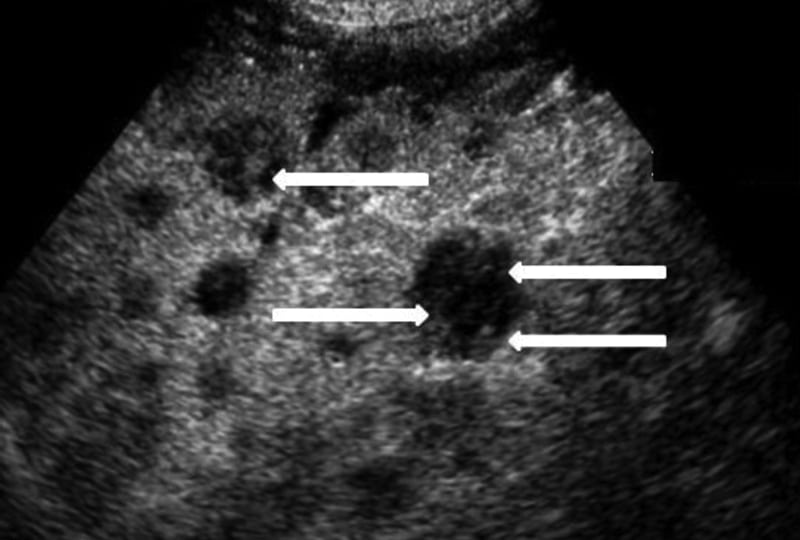 Detection and characterization of liver tumors represents a diagnostic imaging challenge in both human and veterinary medicine. Routine gray-scale B-mode ultrasonography is sensitive for detecting focal disease in the liver but is nonspecific. It is not possible to discriminate between benign lesions and malignancies in most instances because both may have similar echo patterns.1

The purpose of this study was to:

The 30 dogs included in this study (mean age, 11 years; range, 5-15 years) had been presented for routine abdominal ultrasound. They were selected if at least 1 nodule was detected in the liver during ultrasound examination and if a definitive diagnosis was obtained by histopathology or cytology of the liver nodules. Dogs with hepatic masses (lesions > 3 cm) were included in the study if hepatic nodules were also present. In these dogs CEUS was performed to evaluate the nodules.

Two-dimensional gray-scale and CEUS examinations were performed. The region of the liver containing nodules was identified and the probe was maintained in the same location for the CEUS examination.

A 1-minute duration cine loop was recorded during contrast enhancement and still images and clips were digitally stored and transferred to a picture archive communication system (PACS) (soundeklin.com). Ultrasound-guided fine-needle aspiration (FNA) or biopsy of the nodules was performed using a 22-gauge, 1.5-inch needle attached to a 3- or 5-mL syringe for FNA and an 18-gauge Tru-cut biopsy needle for core tissue samples. No complications occurred after these procedures.

CEUS of normal canine livers has been previously described and its use for detection and characterization of liver nodules in dogs is being reported with increasing frequency. However, only 2 studies describe the use of an agent containing perfluoropropane and only 1 study included primary liver tumors.3,4,7-10 Three studies describe CEUS and the use of different types of contrast medium for characterization of liver lesions in dogs.4,9,10 Vascular morphology during the arterial and portal phases had not been described for hepatic nodules in dogs when using CEUS. 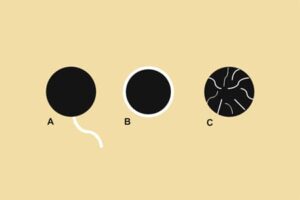 For each study, the echogenicity of the normal liver parenchyma and the nodules (after administration of contrast medium) were subjectively assessed for 1 minute. In both the arterial and portal phases the nodules were evaluated for presence or absence of vessels. The distribution of vessels (when present) was classified into 3 patterns (Figure 1):

The sensitivity, specificity, and accuracy of CEUS to differentiate malignant from benign lesions was calculated. A contingency table analysis was performed using software with a 2-tailed Fisher’s exact test to compare the proportional distributions using a level of significance of p< 0.05.

Of the 30 dogs in this study, 15 were diagnosed with benign nodules and 15 with malignant nodules. The diagnosis was based on histopathology in 10 cases and cytology in 20 cases. The diagnosis and agreement with CEUS are summarized in Table 1. 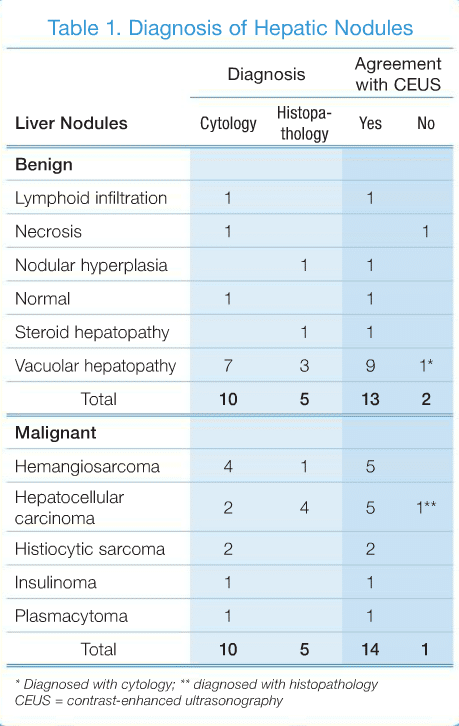 The appearance of livers with benign nodules on 2-dimensional gray-scale ultrasound varied widely:

After administration of contrast: 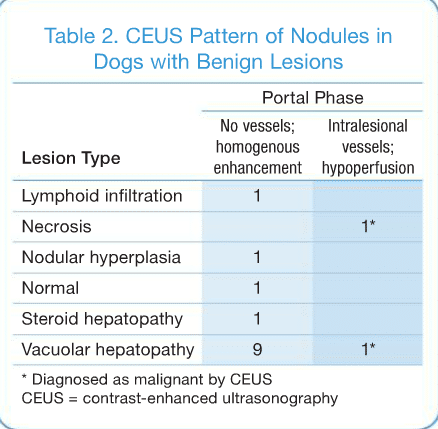 With CEUS, 14 of 15 dogs with malignant nodules had a statistically significant (p = 0.0001) different pattern of enhancement than that of dogs with benign lesions (Table 2). 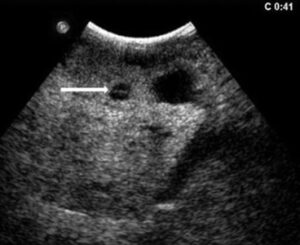 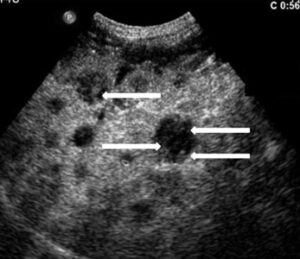 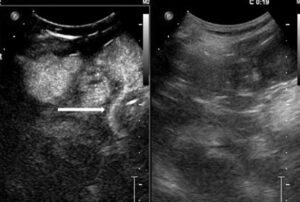 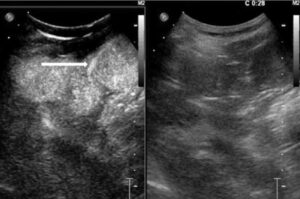 By increasing the intensity of the signal from blood, intravascular contrast media help display the morphology and shape distortions of tumor vasculature, which allows mapping and assessment of the characteristics of vessel flow.11

The main difference between benign and malignant lesions is:

Patterns of contrast-enhancement during ultrasound for specific hepatic lesions have not been extensively described in veterinary medicine. Two previous studies in dogs with hepatocellular carcinoma described contrast-enhancement patterns similar to that found in this study, with lesions remaining hypoechoic compared to liver parenchyma during the portal phase, which markedly increased the conspicuity of these lesions.4,6 One recent study, which used a new contrast agent, described a rim pattern of enhancement with malignant histiocytosis.9

This study described the enhancement patterns of 3 different metastatic tumors. All exhibited hyperechogenicity during the arterial phase, with 2 (histiocytic sarcoma and insulinoma) showing ring enhancement, and all were hypoperfused compared to liver parenchyma in the portal phase, a pattern previously described for metastasis in humans and dogs.4,6,12

This study’s limitations were:

Future studies that include a larger number of dogs with primary tumors and metastasis from tumors other than hepatocellular carcinoma are needed to (1) better assess the pattern of enhancement of specific tumor types and (2) assess whether primary lesions can be differentiated from metastatic lesions based on CEUS.

This study shows the importance of ultrasound image interpretation of liver nodules in general practice. Hepatic nodules are a very common finding, especially in older canine patients. Because not all of them are malignant, tissue sampling with FNA or Tru-cut biopsy is necessary and generally safe. Alternatively, CEUS is a safe and noninvasive procedure. However, it does require specialized equipment and ultrasound probes as well as contrast medium.

Nathalie Rademacher, DrMedVet, Diplomate ECVDI & ACVR is an assistant professor of diagnostic imaging at Louisiana State University School of Veterinary Medicine. Her research interests include contrast harmonic ultrasound and contrast ultrasonography in general. Dr. Rademacher received her DVM from Just-Liebig-University Giessen (Germany). After a 1-year internship in a private referral center in Switzerland, she completed a 4-year residency training program in diagnostic imaging at the Vetsuisse University Zurich (Switzerland).

Lorrie Gaschen Lorrie Gaschen, DVM, PhD, Diplomate ECVDI, is a professor and chief in the section of diagnostic imaging at Louisiana State University School of Veterinary Medicine. She has authored publications and book chapters, mainly in the field of ultrasound. Dr. Gaschen received her DVM from University of Florida. Prior to completing a diagnostic imaging residency at University of Bern (Switzerland), she was in private practice in Florida for 2 years. Dr. Gashen received her PhD in renal transplant imaging at University Medical School is Utrecht and then returned to University of Bern as an associate professor.